The work Atlas Coelestis In quo Mundus Spectabilis is a collection of 32 astronomical charts, which were made by the German scientist Johann Gabriel Doppelmayr. The atlas was first published in 1742 by the Nuremberg’s Homann print shop, which specialized in astronomy. It is one of the most splendid and influential works of research concerning the astronomy of the Middle Ages and contains breathtaking, hand-colored charts of the heavens and stars.

A special document by the German astronomer Johann Gabriel Doppelmayr can be found in the library of the Nicolaus Copernicus University in the Polish city of Torun. Its full title reads Atlas Coelestis In quo Mundus Spectabilis and was first published by Nuremberg’s Homann publishing house in the year 1742. The artfully illuminated work contains a collection of 32 double-page cosmological charts. In this work, the influential scientist Doppelmayr recorded the findings of his lifelong exploration of the heavens and the stars.

Who Was Johann Gabriel Doppelmayr?

The astronomer Johann Gabriel Doppelmayr lived and worked in the 17th and early 18th century in Nuremberg. He was born the son of a merchant. After Nuremberg’s Aegidianum School, he enrolled in 1696 in the Faculty of Law at the Universität Altdorf. However, he soon changed to the Universität Halle and there devoted himself to the study of mathematics and physics. Later, Doppelmayr became a professor of mathematics in Nuremberg. He was an enthusiastic researcher of the heavenly bodies and is known to this day as an influential German astronomer. Beginning in 1728, he collaborated with Johann Georg Puschner to create earthly and celestial globes. His impressive sky atlas, in which the astronomical knowledge of his time was recorded, is the scientist’s most important work.

The Atlas Coelestis contains 32 charts of the heavens, which were designed by the author Doppelmayr himself. His research was based on the teachings of famous astronomers like Ptolemy, Copernicus, and Kepler. The sky charts were pressed onto the pages of the work as copperplates and later hand-colored in gorgeous colors. Of particular interest are a few illustrated depictions of the famous scientists who had an impact on Doppelmayr. On the title page of the work, one finds pictures of Copernicus, Kepler, and other pioneers of astronomy in characteristic poses and with unique astronomical instruments.

Taurus is charging across the heavens along the Tropic of Cancer with its horns lowered in attack, impressive musculature emphasized by delicate shading. Its attack is being parried by Orion, shown standing his ground with a shield, dressed in ancient Greek armor, and holding his iconic club aloft. Both of their stars are highlighted with gold leaf. They are just two of the constellations that crowd this part of the night’s sky and are surrounded by Perseus, Aries, Lepus, and Eridanus. 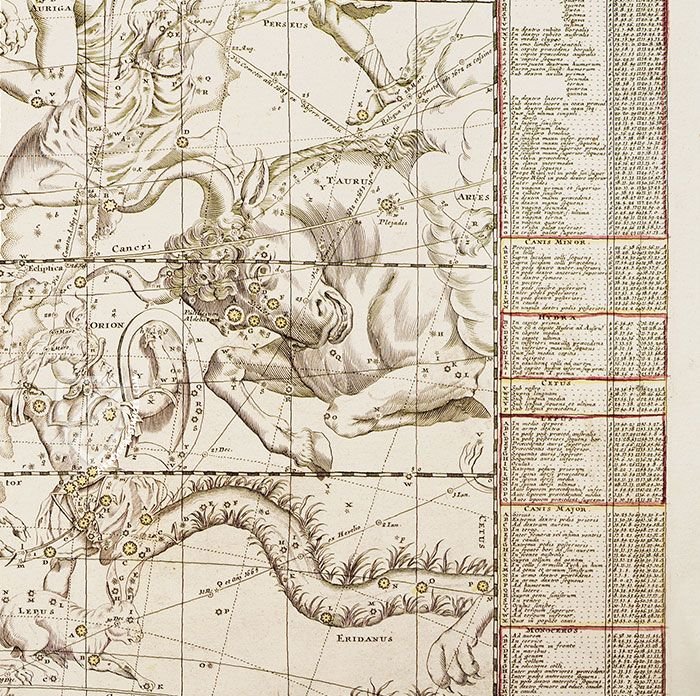 This incredibly detailed and finely colored woodcut demonstrates Copernican heliocentrism, an idea first published in 1543, 200 years before the creation of this codex. It was a great scientific breakthrough – one of the most important in history – but is nonetheless adorned with the zodiac symbols, representing the pseudo-science of astrology, which was just as popular as ever in the 18th century.

Other information surrounds the main diagram, such as an attempt to compare the relative sizes of the planets and the sun in the upper-left hand corner, with a diagram of an eclipse below it. Tools used by astronomers are shown in the lower right hand corner alongside two figures (a woman and a cherub) including a telescope and compass. 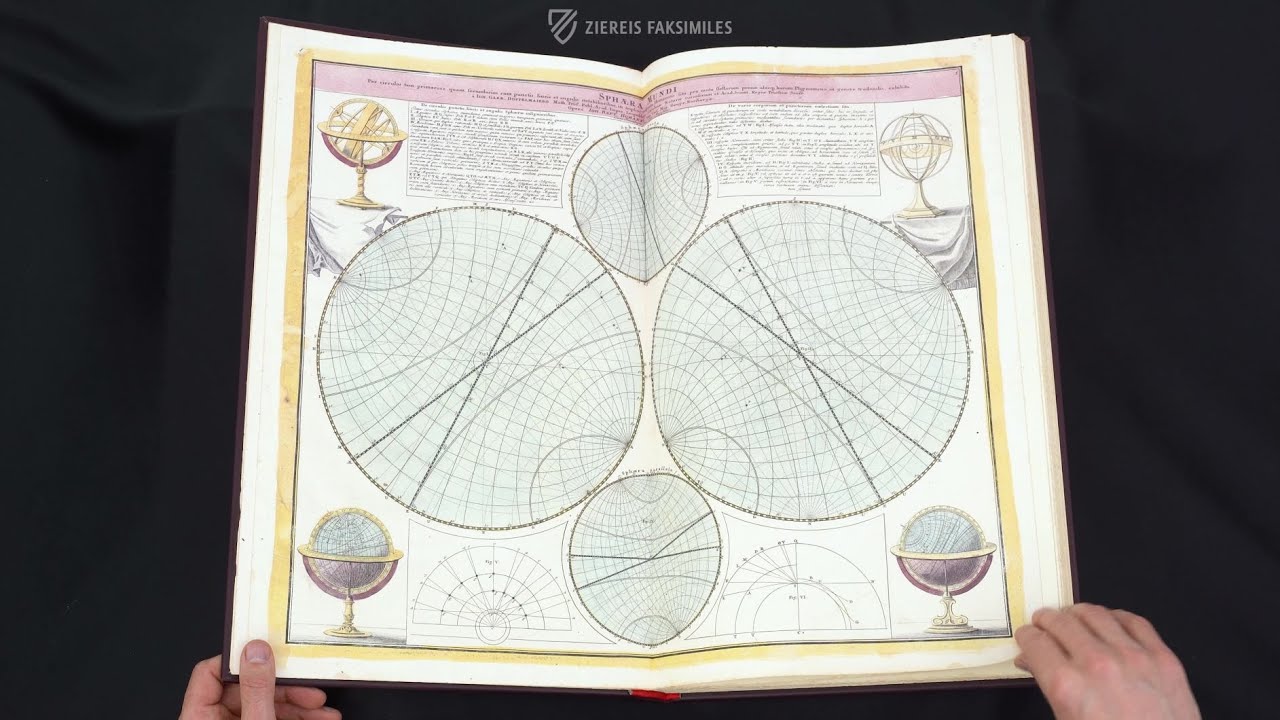 Publisher: Orbis Pictus – Pelplin, 2011
Limited Edition: 294 copies
Binding: Bound in calfskin, incrusted with a goatskin gusset with the title and name of the author gilded
Commentary: 1 volume
Languages: English, Polish
1 volume: Exact reproduction of the original document (extent, color and size) Reproduction of the entire original document as detailed as possible (scope, format, colors). The binding may not correspond to the original or current document binding.
Price Category: €€ (1,000€ - 3,000€)
Edition available
Price: Log in here!
Order / Ask a Question
You might also be interested in: