Among medieval prayer books, the Liber precatorius of the Bavarian State Library, which was produced in the Middle Rhine region ca. 1175, is distinguished both by the abundance of its illustrations and for their extraordinary quality and iconographic specificity. 72 miniatures accompany the individual prayers, some illustrating Old Testament scenes from the Creation story to the Ten Commandments, while others refer to New Testament events, concluded by an image of the Last Judgment. Aside from the importance of the prayers and the unique image sequence related to them, the manuscript is distinguished for supposedly being the personal prayer book of the famous abbess, writer, composer, philosopher, Christian mystic, visionary, and botanist Hildegard von Bingen.

This precious manuscript from the Bavarian State Library is believed to have been the personal possession of one of the most famous women of the entire Middle Ages: Hildegard von Bingen (1098–1179). Written mainly in Latin, the sumptuous design and selection of prayers indicates that the Liber precatorius was intended for a high-ranking woman and was likely created by a Cistercian monk who collaborated with a miniaturist familiar with both older theological traditions and the new ideas of the 12th century, a time of reform and innovation in the church.

This manuscript is unusual and only one other surviving work shares its image program and salvation-historical perspective, the structure of which expresses more than just the intention to convey a biblical completeness but allows the reader to reflect on the course of the world and their own existence in it. The 72 miniatures chronologically traces the history of piety from Genesis to the Last Judgement including a detailed depiction of Christ's ministry. It is designed to allow the reader to contemplate the salvific events and create a meditative relationship with them. For example, the miniature on the theme of the carrying of the cross shows Christ embracing a heavy, large cross standing on the ground, but it is not the actual carrying of the cross that is emphasized, but rather Christ's willingness to take up the cross and begin the path of suffering. It thus shifts the emphasis from the historical event to the inner process of the action. The cross is also associated with the tree of life, especially in the depiction of the Last Judgement.

Origins of the Manuscript

Judging by the iconography, the manuscript probably originated in Trier, perhaps in the monastery of St. Eucharius, which Hildegard would have had regular contact with. German texts were added sometime in the first half of the 13th century to explain the illustrations accompanying two of the Marian prayers, one of which was crossed out with ink by a later hand, which has been a considerable obstacle for researchers. Nonetheless, a linguistic analysis indicates that the notes were written in an Alemannic dialect, i.e. the southwestern linguistic German area. It is thus believed that these notes were added by nuns from the region of Bingen-Worms, which is not far from the convent founded by Hildegard at Rupertsberg. 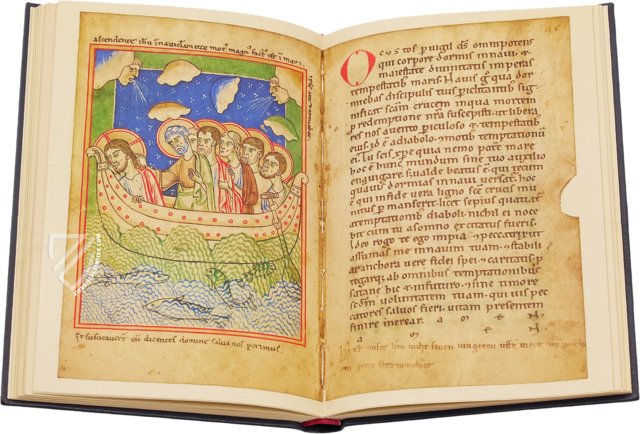 The Temptation of Christ

After his baptism by John the Baptist, Jesus went to the Judean Desert to fast for 40 days and nights, during which time he was tempted by Satan three times. The lower register of this page shows the temptation on the pinnacle of the temple, assumed to be the Temple Mount in Jerusalem. Seated on a tile roof over the entrance, Jesus maintains his integrity in the face of Satan’s challenges, saying: “It is written again, ‘You shall not tempt the LORD your God.’” (Matt. 4:7) 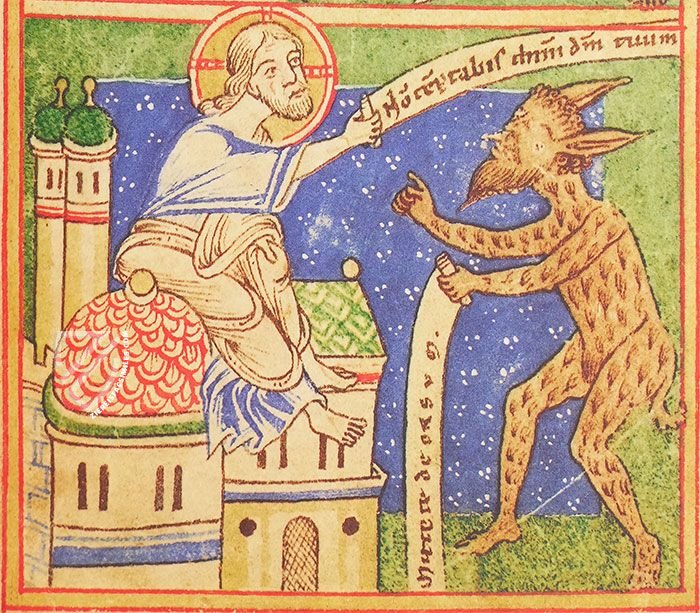 Commemorated today on Palm Sunday, Christ’s triumphal entry into Jerusalem marks the beginning of the Passion cycle. Accompanied by his Disciples, Christ is depicted riding on a donkey, which symbolizes peace in contrast to a horse, and giving the sign of the benediction while dressed in flowing garments.

The citizens of Jerusalem have come out to meet him on the road, some lay their clothes on the ground while others climb a palm tree to retrieve branches. They are depicted as being small and childlike in comparison to the figures in the oncoming procession but are depicted with natural bodies and expressive faces: e.g., the figure dressed in red climbing the tree looks frustrated or perhaps impatient to get a glimpse of the Son of God. 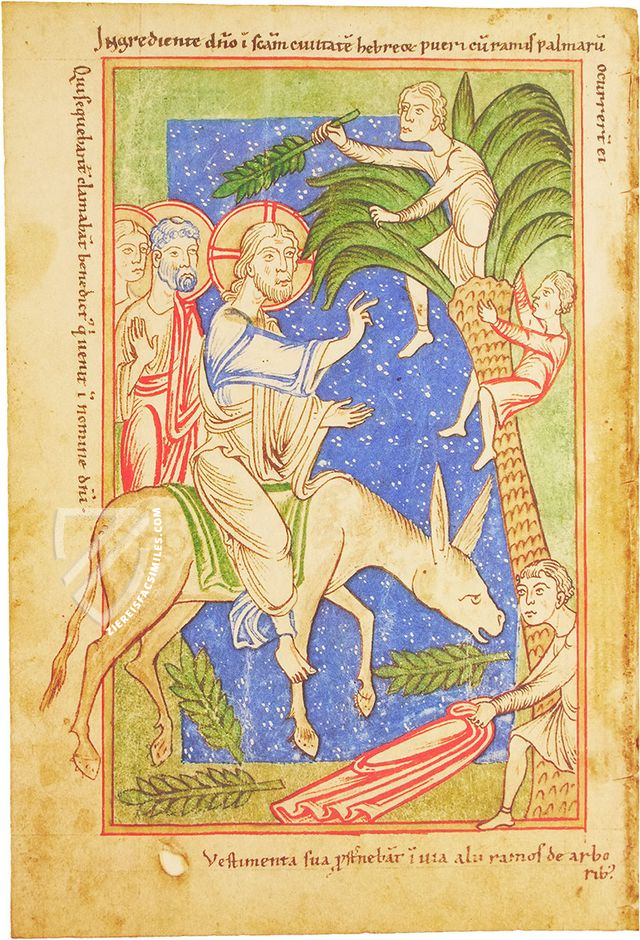 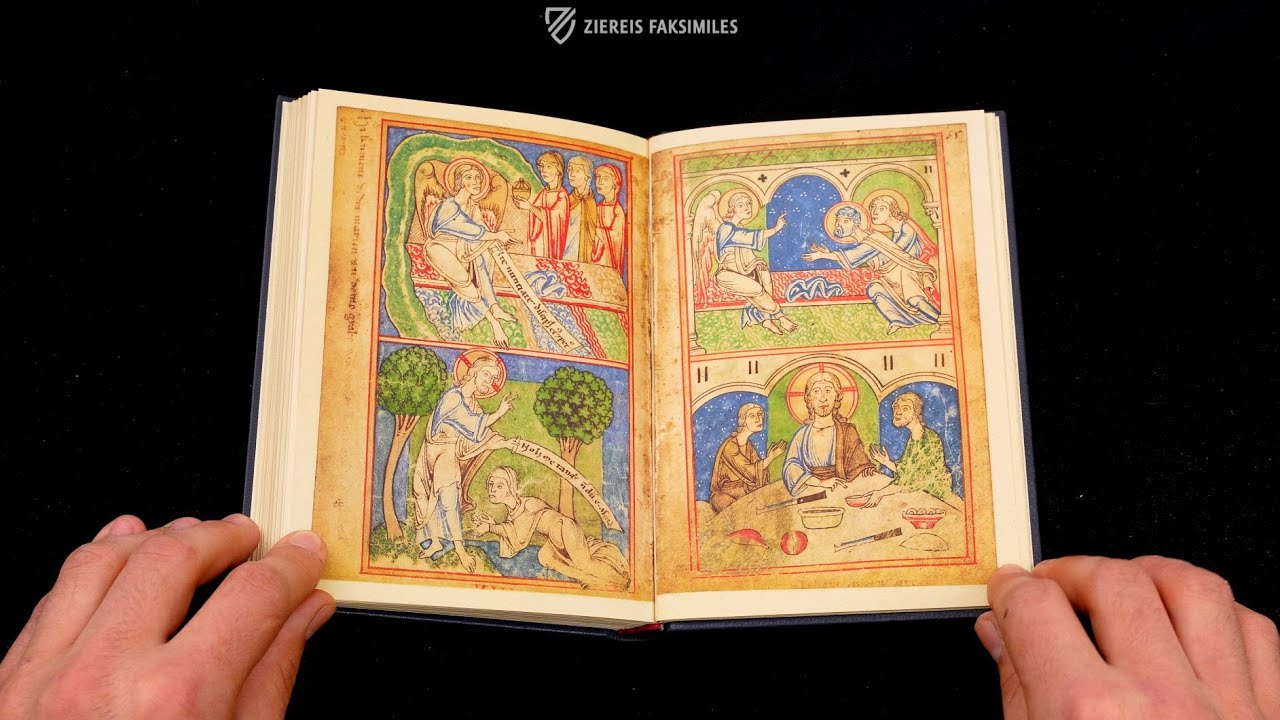