A mysterious and splendid specimen of an illuminated private devotional book from the late 15th century, the Codex Oliveriano I. Various indicators in the manuscript point to a Bohemian origin, but the patron and artists responsible remain unknown. The codex is actually a union of two manuscripts, a psalter and a hymnal, which originated between 1476 and 1480. The work is further adorned by a gorgeous calendar section and other decorative elements typical of a religious manuscript created for private use. The miniatures and illumination are of the highest quality and are second to none among the works produced by Prague’s ateliers and exhibit some influences from the famous masterpiece known as the Très Riches Heures du Duc de Berry. This is a wonderful monument to late–15th century illumination, a time when the art was reaching its zenith in the face of the rising tide of book printing.

Although the patron and workshop responsible for this splendid private devotional book remains anonymous, the quality of the manuscript indicates that they must have been someone of wealth and sophistication. Manuscript art was reaching its zenith in the late 15th century, just as book printing was spreading across Europe, and this mysterious codex represents a fine specimen of this transitional period. In fact, a detailed analysis of the manuscript indicates that it actually consists of at least two other works which were united into a single codex. The Psalms and Hymns sections are different in design, spelling, and numeration. The psalter section has a note in the colophon dating it to 1476, while three more dates are found throughout the rest of the manuscript ending with the year 1480. Thus, the component parts had to be worked still further in order to homogenize them aesthetically, which was apparently undertaken by several scribes over a few years. Various stylistic indicators in the work point to Bohemia as the region in which the work originated. Nonetheless, they succeeded in creating a splendid manuscript that is apparently modelled on the décor and miniatures of the famous masterpiece known as the Très Riches Heures du Duc de Berry. Preserved today in a splendid 18th century red leather binding with gold impressions, manuscript thus stands shoulder to shoulder with the great manuscripts from the court school in Prague.

A Kaleidoscope of Illumination

The Gothic text of the manuscript is arranged in two columns and are adorned with full-page miniatures, friezes, small framed scenes, and filigree initials – all splendidly rendered with vivid colors and gold. The pages of the manuscript are practically overflowing with artfulness. As is typical, the book begins with a calendar containing a complete lists of feasts and saint’s days, and the local nature of these holidays, particularly with respect to local saints, is one of the clues that allowed researcher to place the manuscript geographically. Each month is presented on a double-page illustrated with labors of the month and scenes from everyday life: blooming flowers in May, harvesting wheat in August, salting meat in December. Untypically, the calendars do not show the constellations associated with the month, merely displaying the corresponding zodiac sign. This section is followed by tables for calculating information based on the calendars, both for religious and medical purposes, i.e. when a bloodletting is a good idea and when to hold off. The purely religious sections of the book come next, i.e. the psalter and sacred hymns. Although originating from separate sources, they do share some stylistic elements, like friezes and initials that are almost identical. Although the details of this splendid specimen’s genesis remain a mystery, it can be said with certainty that this codex was intended for personal use, not liturgical. 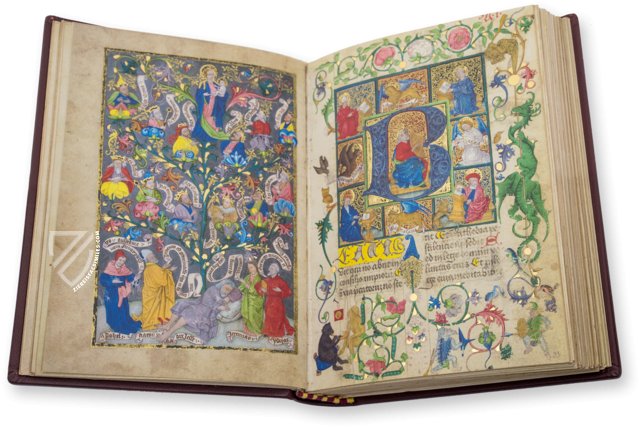 Sitting in front of a splendid filigree background, the author of the Vulgate Bible works at his desk. The housecat-sized lion with its paws on his knees is a reference to the legend that he had tamed a lion by pulling a thorn from its paw. Although the office did not exist during the lifetime of Saint Jerome, he is often depicted with the red robes and hat of a cardinal during the Renaissance, at which time a cardinal would serve as secretary to the pope as Jerome had done for Pope Damasus I. 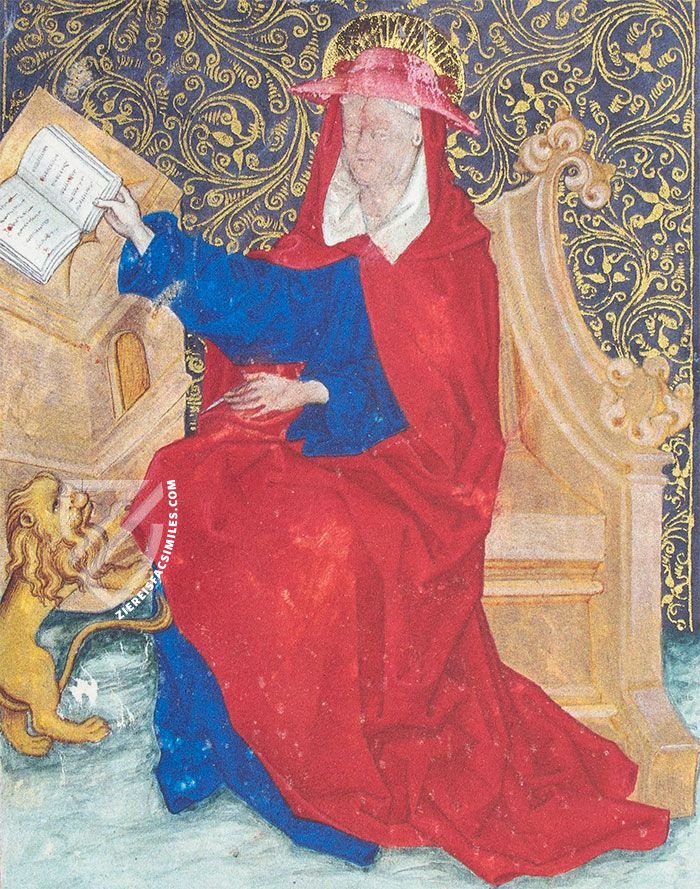 This splendid page introducing the Psalter section is a treasure of late medieval illumination. King David is depicted inside of the “B” initial surrounded by the Evangelist symbols with banderoles and the four “Fathers of the Church”: Gregory the Great, Saint Ambrose, Augustine of Hippo, and Saint Jerome.

However, it is the marginalia that really distinguishes this page. A green dragon climbs up the right margin of the page, where a man with a club is ready to strike. On the left, a hawk attacks a rival owl. At the bottom, the face of a bearded old man with a hat has flowering vines growing out of his mouth. A bear and monkey play music on one side while two hairy wild men face off against each other with spears and bucklers on the other. 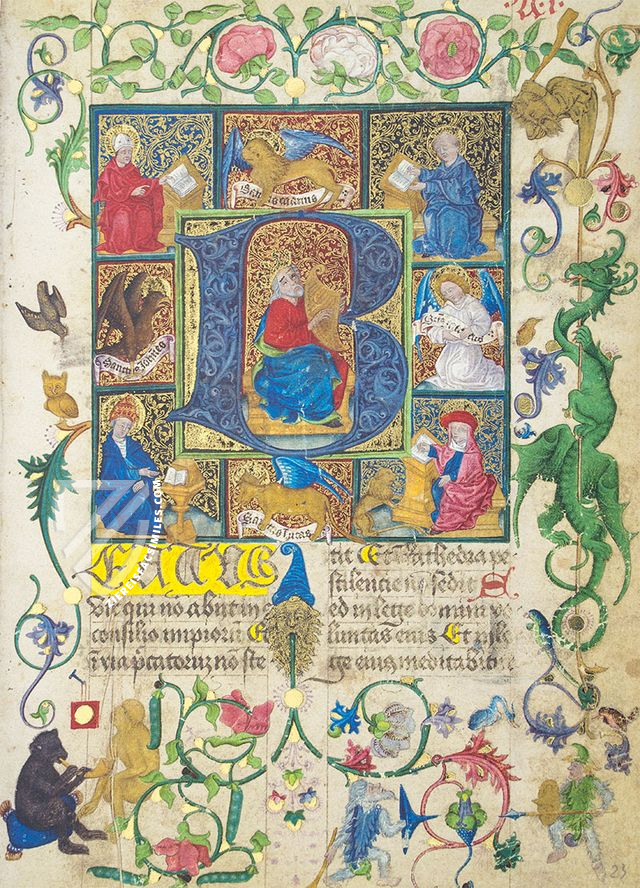 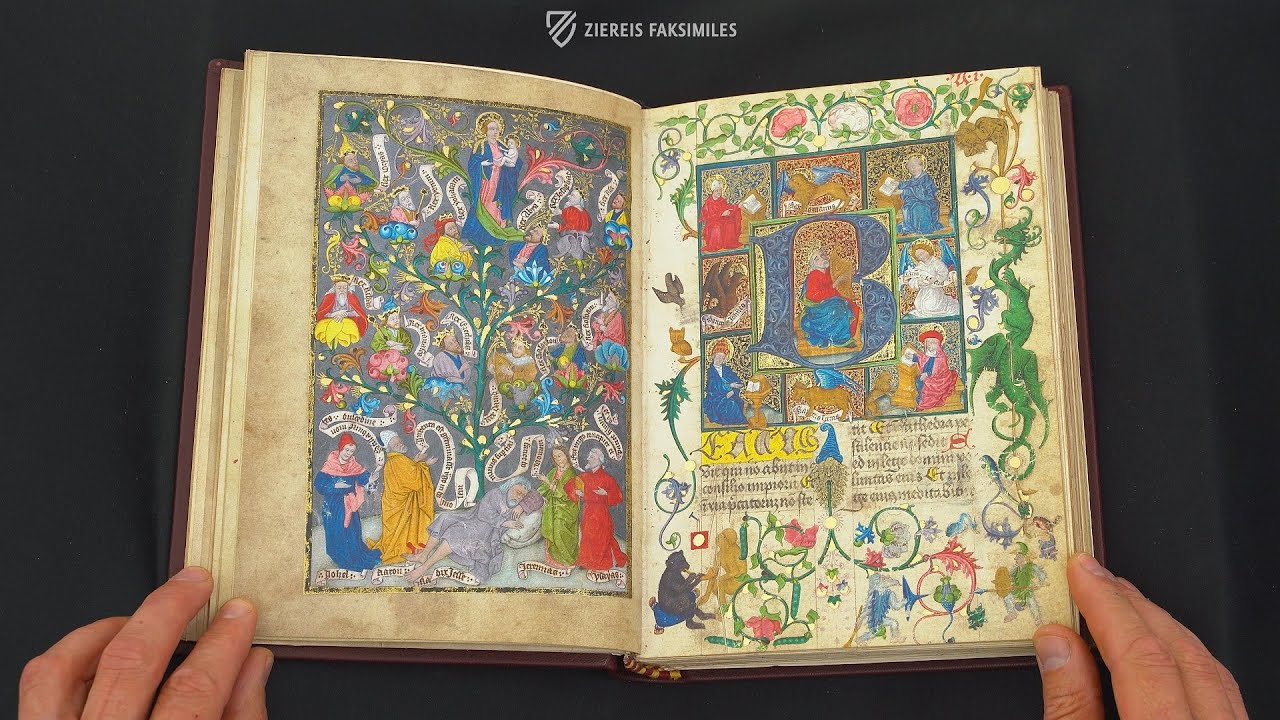 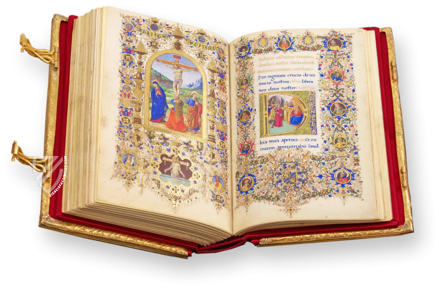 Italian Renaissance art in filigree perfection: the wedding gift of Lorenzo the Magnificent to his eldest daughter Lucrezia