The monumental history of the Trojan War has inspired artists, authors, and directors for centuries. One of the most beautiful adaptations of the epic material was made in the Italian city of Bologna in the 14th century. The Italian Romance of Troy is based on the literary example of the French author Benoit de Saite-Maure and is furnished with breathtaking miniatures. The impressive, dynamic miniatures illustrate the events of the ancient legend and offer an attractive source about life in Italy at the time of its creation.

The mythological tale of the Trojan War is undoubtedly one of the most influential and repeated legends of all time. It has been continuously adapted, the most recent example being Oliver Stone’s blockbuster “Troy” with Brad Pitt and Orlando Bloom as the leads. The timeless saga has also been reworked countless times in literature. The French author Benoit de Saite-Maure committed himself to the ancient material between 1155 and 1160. In doing so, he completed one of the most significant literary versions of the epic, which was cited and reworked throughout the entire Middle Ages. In the second half of the 14th century, the Frenchman’s masterpiece was adapted by an anonymous Italian illuminator, who created one of the most astounding illuminated manuscripts in the history of medieval illumination from this famous example. The manuscripts is an unbelievably richly furnished picture book with artful and historically informative miniatures on practically every page.

Benoit de Saite-Maure was a French-speaking author who lived and worked in the County of Touraine in the middle of the 12th century. His most famous work was the Romance of Troy, completed between 1160 and 1170 for King Henry II of England and Queen Eleanor of Aquitaine. Their court was one of the most important intellectual and cultural centers of the medieval world, and as was common among the intellectual nobility of their time, only French was spoken here. For his material template, Saite-Maure employed not only Homer’s famous epic – The Illiad (which was only known through hearsay in Western Europe at that time) – but also two from two depictions supposedly composed by eyewitness of the Trojan War. In doing so, it deals with the descriptions of Dictys Cretensis, who experienced things from the Greek side, as well as the tale of Dares Phrygius, who was purported to be in Troy at the time. However, Benoit only took over the rough parameters from Dictys and Dares, which he fancifully furnished with love stories, chivalric battle scene, and scholarly excursions.

The Italian Adaptation of the Masterpiece

Benoit de Saite-Maure’s The Romance of Troy was, as mentioned earlier, copied in Italy in the 14th century and furnished with a rich miniature cycle. From the beginning, France, with its troubadours, epics, and court poetry, had assumed a leading position in the development of vernacular literature of Europe. French literature was the example and trailblazer, its works were translated, imitated, reworked and rearranged. French literature played an especially big role in urban centers like Bologna and Venice. The Italian version of The Romance of Troy was also most likely produced in Bologna. The 3000+ verse literary monument from France was not only reproduced in its original language, the real accomplishment of the anonymous adaptor lays in the illustrations of the ancient saga. The picture cycle of the Italian The Romance of Troybelongs among the most outstanding ever created in the history of illumination.

The impressive miniatures of the Italian version of The Romance of Troy puts the tale’s individual moments of action so clearly in the limelight, that the events can be completely understood without text by means of the illustrations. However, the events related in the text are not exclusively presented pictorially. The spontaneous narrative pleasure of the authors also shows itself equally in the small embellishing details and anecdotes that do not occur in the story. A particularly attractive example for the unbelievably lifelike and vivid illumination is a completely unusual depiction of the shipwrecked Ajax and his companions. Some of the castaways in the picture cower shivering on the rocky island, on which they have taken refuge, others laboriously swim to the shore, still more lie drowned in the water. Never before has an illuminator managed to design pictures of such drama and expressivity. The miniatures of the precious manuscript need not eschew comparison with the great works of the Italian painters. Some of the miniatures artfully exhibit everyday objects as they appeared in 14th century Italy. Typical Italian architectural features are portrayed, along with furniture of the like that would be found in Italian homes, and typical garments and costumes. The pictures of the The Romance of Troy distinguish themselves not only because of their graceful beauty. By the same token, they represent an extremely interesting, historically-significant source about life in medieval Italy. 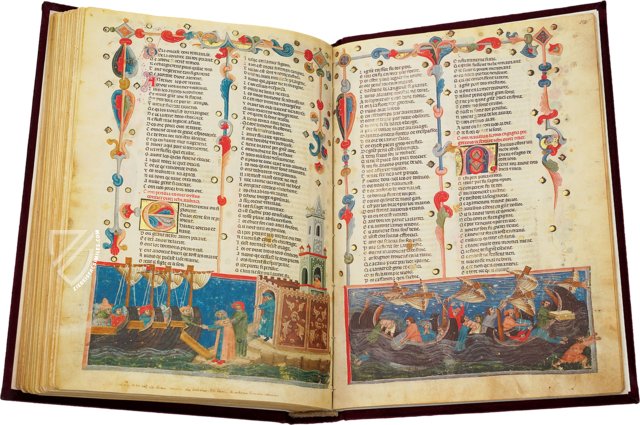 The Trojan War was used by medieval artists to depict contemporary court life and idealized stories of chivalry. This miniature showing the Greeks and Trojans fighting as heavy cavalry is a perfect example because it is a style of warfare that would have been virtually unknown to Bronze Age Greeks. With lances firmly couched under their arms and making use of stirrups, a high medieval cavalry battle unfolds here as the ladies of Troy look down anxiously from the towers of the city. 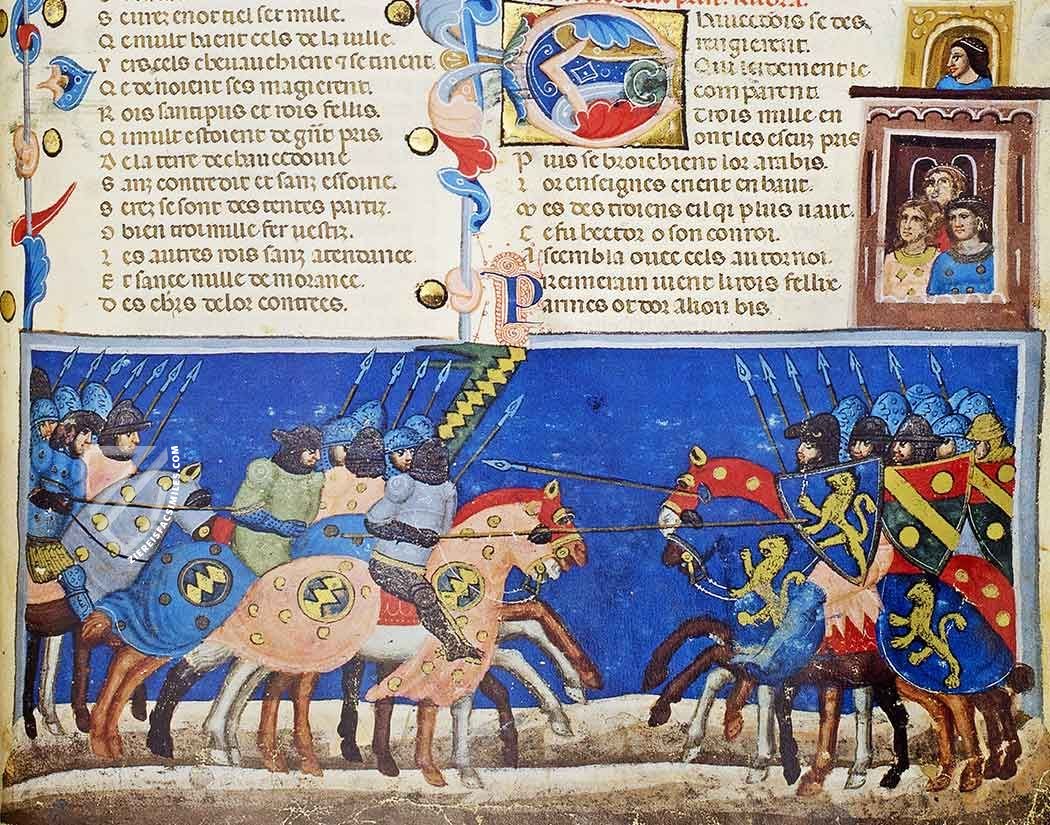 Procession of the Trojan Horse

Although most people today would think of a malicious computer program, here we have an artful depiction of the actual Trojan Horse in this splendid bas-de-page miniature. Soldiers with helmets of silver and gold push and pull the wheeled horse, which is outfitted with bells and a brilliant red saddle. Trumpeters announce the procession as it enters the doomed city of Troy.

King Priam is depicted inside the gate dressed in contemporary garments, as are his counselors and bodyguards, including metal greaves, which were common pieces of both antique and late medieval armor. The tower stretching upward is full of curious citizens looking and pointing at the treacherous gift. Multicolored marginalia and circles of gold leaf fill the rest of the page. 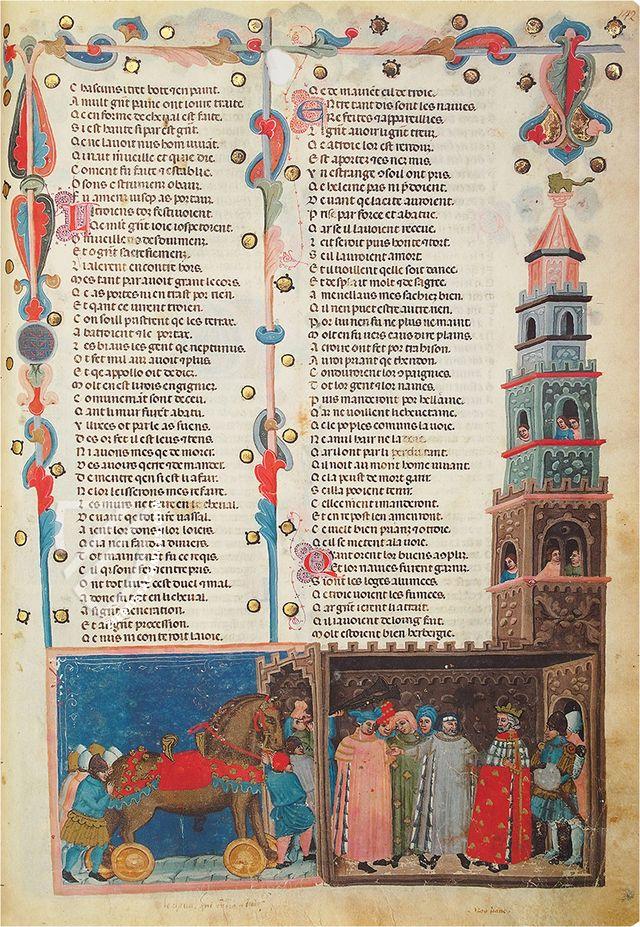 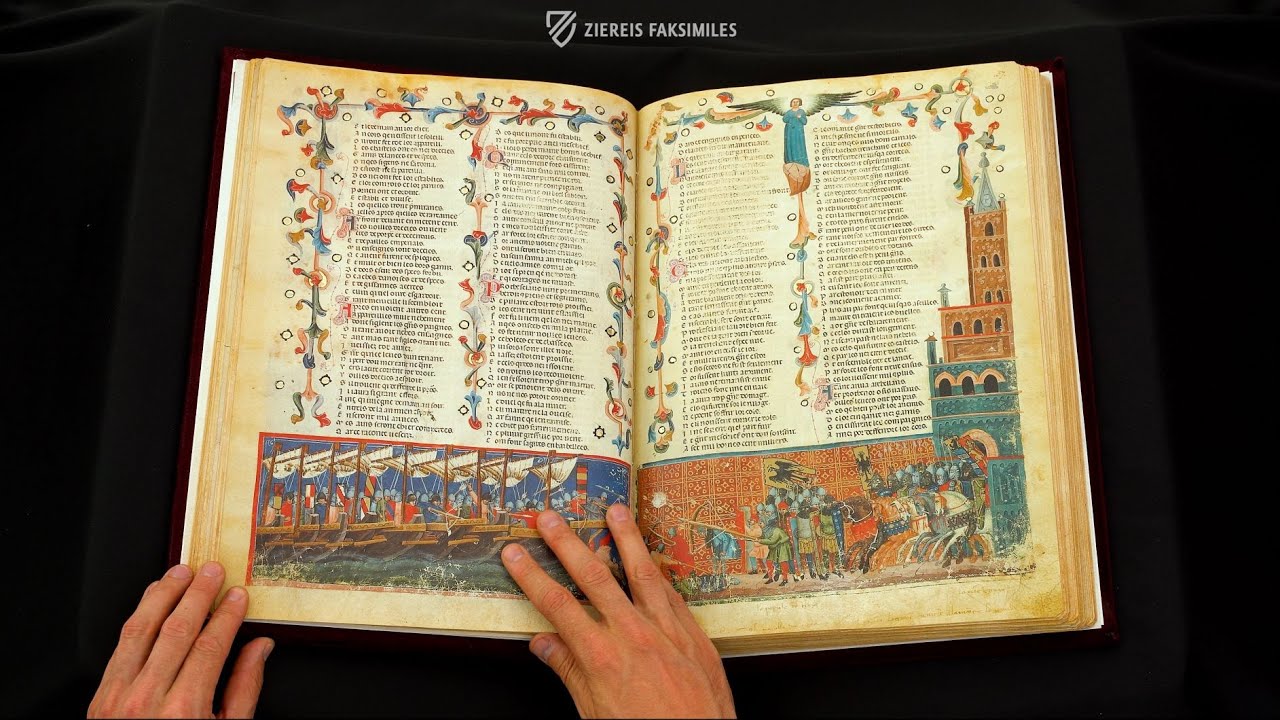 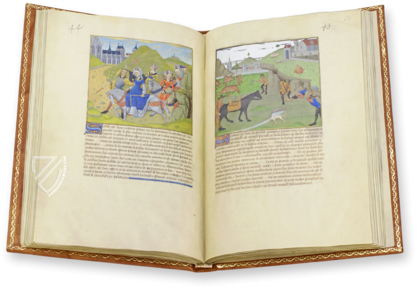 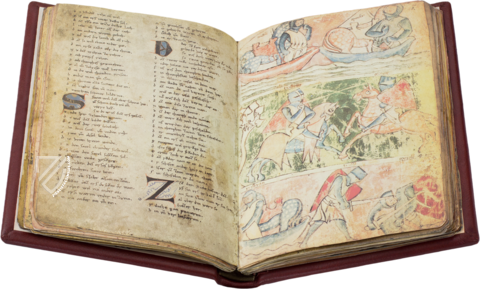 The primary work of the great poet Gottfried von Straßburg: the oldest edition of perhaps the most beautiful German love story of the Middle Ages