With his Divine Comedy, Dante Alighieri (1265–1321) not only created his magnum opus ca. 1307, but also founded Italian literature. Today, countless editions of this masterpiece are in existence. One of them originates from the second half of the 14th century and aside from the important poem, contains the commentaries by Jacopo della Lana (1290–1365) and Andrea della Lancia (pre-1296 – post-1357). First, the 100 luminous miniatures, tasteful bordures, and lavish initials by Michelino da Besozza (ca. 1370 – ca. 1455) make the manuscript a magical experience. In it, the illuminator encapsulates the events of this entire text and glamorously presents them before the eyes of the beholder.

Appearing at the end of the 14th century in Italy, this 301-page edition of Dante Alighieri’s (1265–1321) Divine Comedy also contains additional commentaries by Jacopo della Lana (1290–1365) and Andrea della Lancia (pre–1296 – post–1357). This Italian vernacular work also comprises a bedrock for Italian literature and is adorned with 100 glimmering miniatures, splendid initials, and rich decorative elements by Michelino da Besozzo (ca. 1370 – ca. 1455). Since the escutcheon of the Obizzi family is to be found on the first page of the Inferno, it can be surmised that it was commissioned by or was in the possession of the family for a time.

Miniatures from the Best

The Italian Michelino da Besozzo (ca. 1370 – ca. 1455), one of the most gifted late-Gothic artists from Lombardy, was commissioned to illuminate the manuscript. He already worked for Gian Galeazzo Visconti (1351–1402) and also demonstrates all of his ability with the depictions of Dante’s work. Contrary to the many other illuminations, he did not make these in collaboration with other artists but rather alone.

The illuminator encapsulates the events of the entire text in 100 splendidly-colored miniatures. In order to achieve this, he decided against isolated full-page miniatures and instead chose smaller depictions, which could take up the width of a column. These smaller-format pictures are captivating with their luminosity and the frugal application of gold leaf, wherewith Besozzo skillfully emphasized its features. Corresponding to the scene were artful flowering tendrils, able to enchant with their detailed portrayal of nature.

There are only two clues concerning the origin and history of the comprehensive codex. One is that it appears to havecome to the Biblioteca del Seminario in 1720 when Alfonso Alvarotti died and the library of his entire collection was bequeathed. The second reference is a coat of arms on the first page of the Inferno. In spite of heavy damage, it can be identified as that of the Obizzi family, who had connections in the area of Ferrara and Padua. 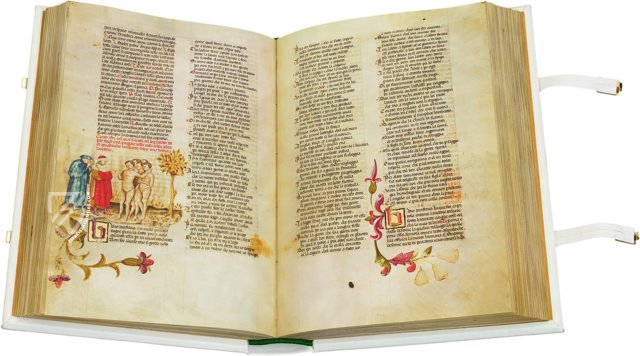 In the fourth sphere of Heaven, which exists within the Sun, Dante encounters examples of Prudence, Justice, Temperance, and Fortitude from among the souls of those who illuminated the world with their wisdom. Most are philosophers and theologians like Thomas Aquinas, but King Solomon is included among them. Aquinas explains to Dante that the famously wealthy and wise monarch of the Israelites is there for his wisdom as a king, not as a philosopher or mathematician. 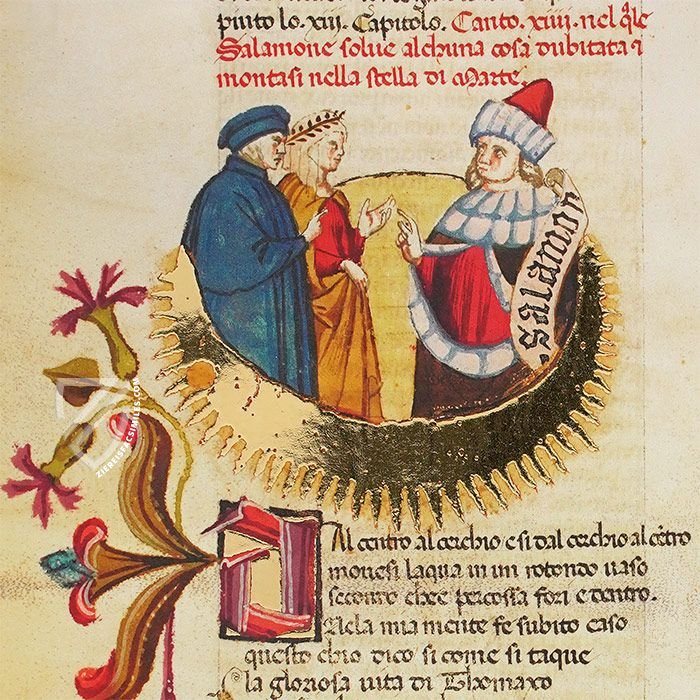 The author portrait in the upper left corner, which is styled after a typical portrayal of St. Jerome, shows Dante in a studiolo, a small study for reading, writing, and meditation. Beneath him, a Splendid “N” initial with a glimmering diamond-patterned gold leaf background introduces the text of the Inferno, which is neatly written in two columns.

The bas-de-page miniature is so faded that one could easily miss it. It depicts the meeting of Dante and Virgil on Maundy Thursday, when the author/protagonist finds himself lost in a dark wood where he is attacked by three beasts: a lion, a leopard, and a she-wolf representing self-indulgent, violent, and malicious sins. He is saved by Virgil, who leads him out of the wood and into the underworld. 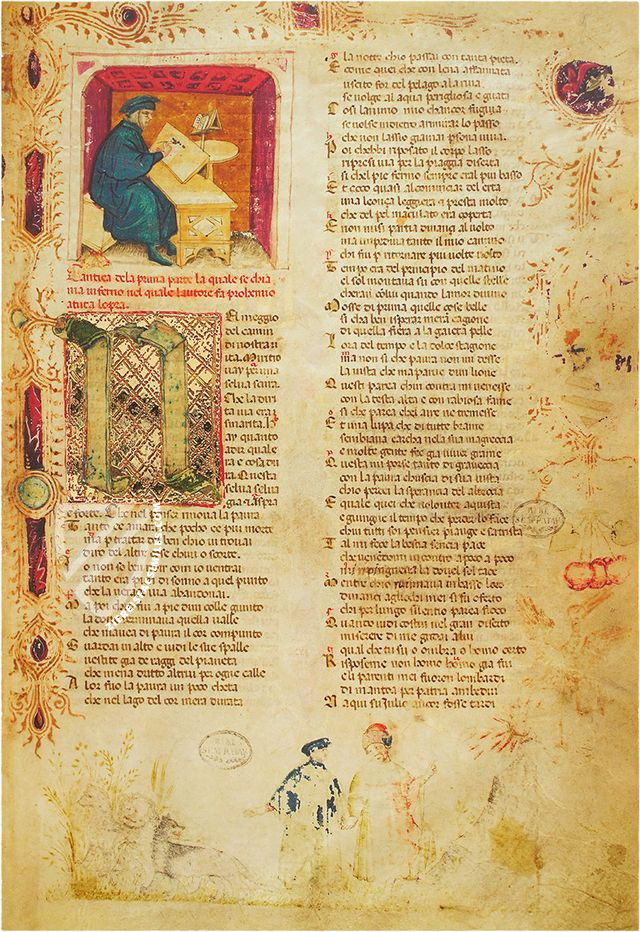 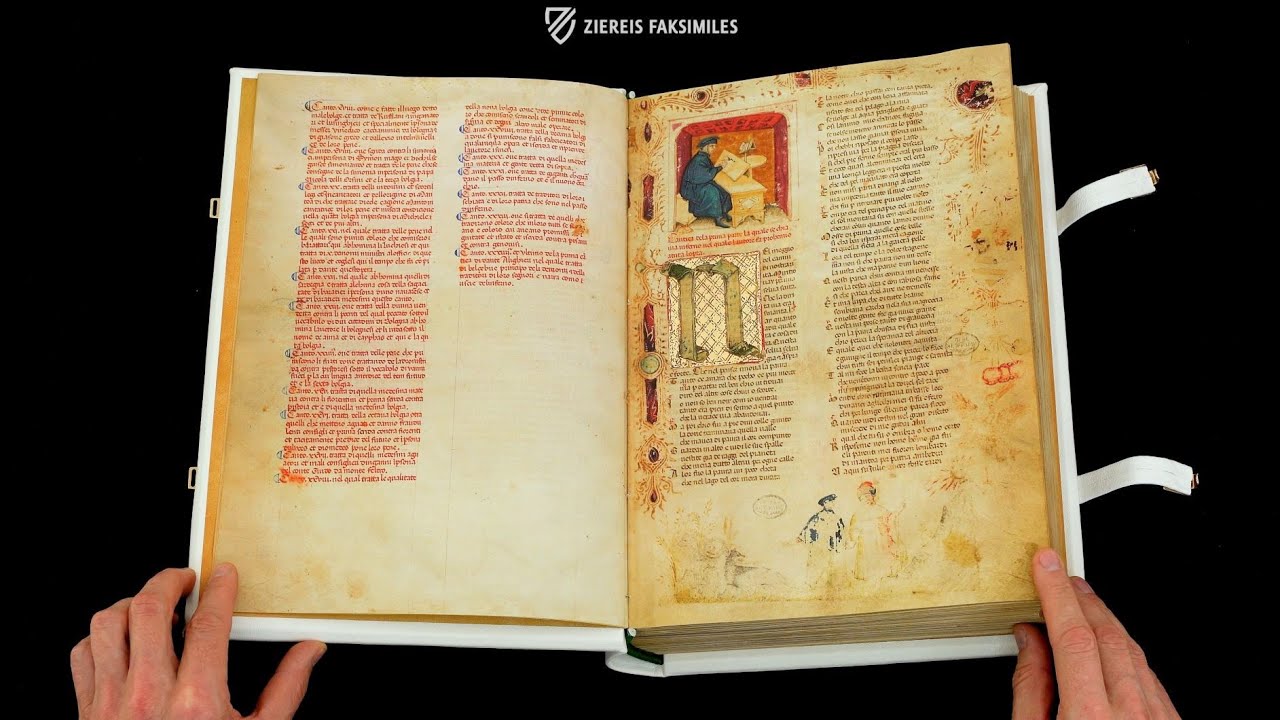