The Divine Comedy by Dante Alighieri is arguably the most important literary work of the Middle Ages and a cornerstone of Italian literature. Dante’s spiritual and philosophical journey through the afterlife is invaluable for its representation of the medieval worldview. This splendid manuscript was made within decades of the now-lost original and features 49 bas-de-page miniatures that are artfully colored and present the narrative in a clear and detailed manner as well as gorgeous historiated initial pages by Pacino di Buonaguida. Furthermore, three commentaries by Dante’s contemporaries and son Jacopo give further insight into the text. After being a prized possession of the Strozzi family for generations, this fine Dante manuscript was donated to Florence’s Biblioteca Medicea Laurenziana in 1785.

Dante Alighieri (ca. 1265-1321) is considered to be the father of the Italian language and his Divina Commedia is not only considered to be the preeminent work of Italian literature but also the most important poem of the Middle Ages. The work has since influenced countless of other authors and is one of the most referenced pieces of literature in the Western literary tradition. Guided by the Roman poet Virgil (70-19 BC), the author and protagonist of the Divine Comedy passes through Hell, Purgatory, and Paradise on a spiritual and philosophical journey that has had a lasting impact not only on Italian literature but on wider European society. Although the original manuscript has not survived, numerous copies were made including this splendid specimen, which is stored under the shelf mark Strozzi 152 in Florence’s Biblioteca Medicea Laurenziana.

The manuscript was originally designed to have each of the 100 cantos illustrated, but only 49 artful bas-de-page miniatures were completed, the second section features pen and ink drawings by Maestro Daddesco, while the final section is unfurnished, and it is not known why work on the manuscript finally stopped. These miniatures present a clear narrative, are artful, detailed, and were created with a sophisticated color palette including gold leaf for the wings of angels and the robes of blessed figures. Nonetheless, the manuscript is beautifully illuminated including three gorgeous historiated initials and friezes at the beginning of each cantica from the hand of Pacino di Buonaguida (active ca. 1303 – ca. 1347) as well as various arabesques and volutes. It is one of numerous Dante manuscript produced in the master’s workshop between 1330 and 1350.

Commentaries on the text of the Divine Comedy can also be found in the manuscript. Jacopo della Lana (1290-1365) was from the oldest noble family in Florence and wrote the first commentary on Dante’s work between 1324 and 1328, the preface of which is included here. Bosone da Gubbio was a politician, writer, and friend of Dante’s who wrote a chapter of commentary for the work. Finally, the son of the author, Jacopo Alighieri (1289–1348), wrote an exhaustive commentary on the Inferno examining virtually every line.

Treasure of the Strozzi Library

A coat of arms on the first page suggests that it was made for or owned by a member of the Bugliaffi family but little else is known about the history of the manuscript. At an unknown time it came into the possession of the Strozzi family, who were the wealthiest members of the Florentine nobility and rivals to the Medici family before their exile from Florence in 1434. Senator Carlo Strozzi (1587–1671) was a major bibliophile and author who accumulated a large personal library, which included the codex at hand. It was among 183 codices that were donated to the Laurentian Library in 1785, where it remains today. 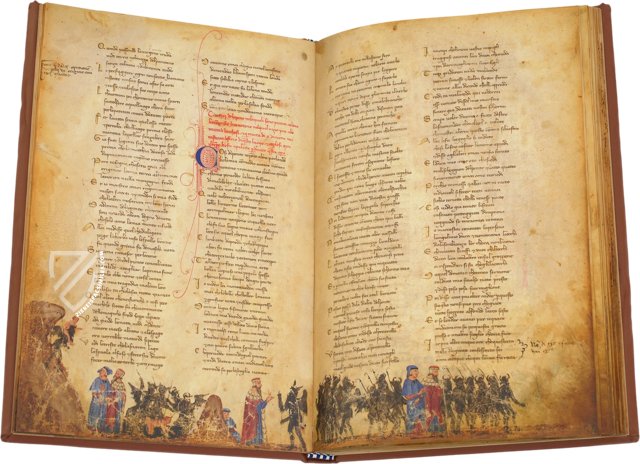 In order to reach the Mountain of Purgatory across the seas, Christian souls gather near Ostia, the Rome’s seaport at the mouth of the Tiber, where they embark on a ship piloted by an Angel Boatman. From there, they are taken West through the Pillars of Hercules and arrive at their destination while singing In exitu Israel de Aegypto. The Angel Boatman’s ship has neither sails nor oars. Dante, kneeling in blue, pleads with the shimmering golden figure, who points to the mortals on the shore. 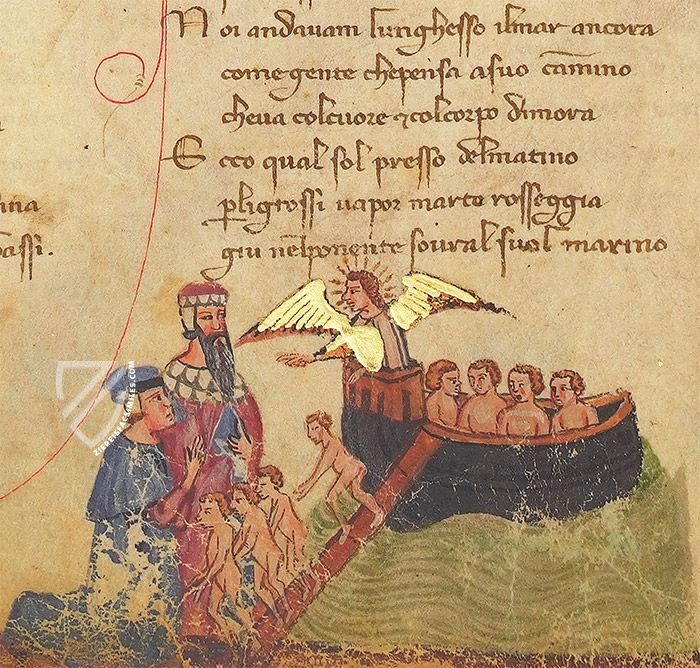 The Gate of Purgatory Proper

After making their way through Ante-Purgatory, where they meet the souls of the Excommunicate and the Late-Repentant, Dante and Virgil stop to rest as night approaches. Dante falls asleep at 8:30 PM, dreams just before the dawn on Easter Monday, and awakes to find that the has been carried up to the gate of Purgatory Proper.

The bas-de-page shows Dante being carried by an eagle flanked by two flames, and then appears next to Virgil. Both figures kneel before the angel guarding the gate of Purgatory, Peter’s gate. They are allowed to pass through after the angel uses the tip of his sword to draw the letter “P” 7 times saying that the one of the “P”s will be erased by each of the angels granting passage to the 7 terraces of Purgatory. 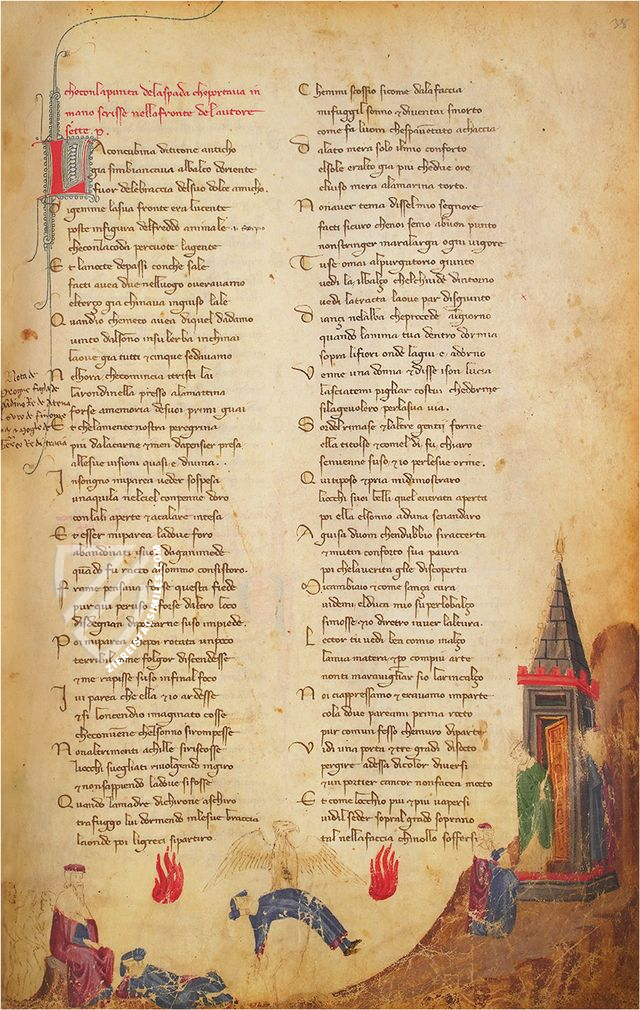 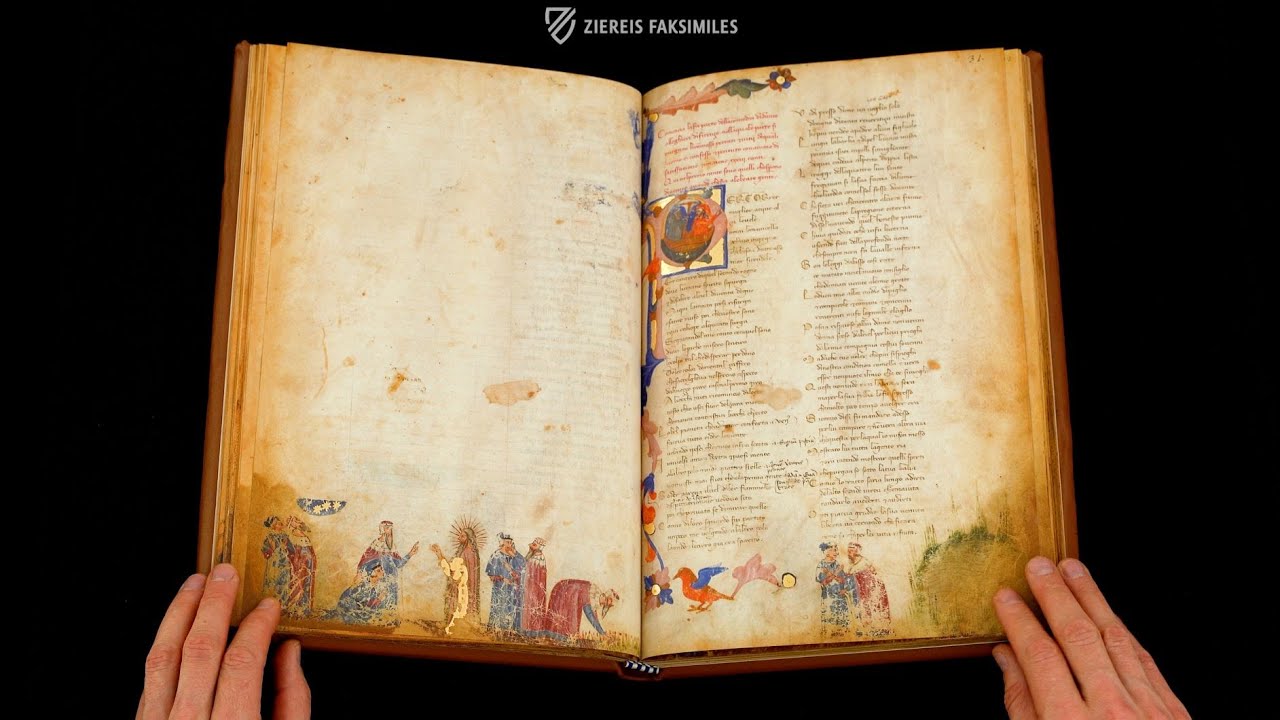 One of the oldest, finest, most important, and most sought-after Dante manuscripts in existence: the Codex Trivulziano 1080, named after a previous well-educated 19th-century owner

A light version of Dante's Divina Commedia?: an abridged version of the Commedia with many as yet unsolved mysteries concerning its whereabouts in the approximately 500-year history of this unique manuscript