Jacopo della Lana wrote one of the oldest and most highly regarded commentaries on the Divine Comedy by Dante Alighieri, which is presented alongside the work itself in this fine Gothic Italian manuscript. After centuries of being divided between two libraries in Florence and Milan, the fine vernacular manuscript has been reunified in its original form.

Almost 700 years after it was created, the precious codex known as the Dante Riccardiano-Braidense, is being united into a single, complete codex after having been long divided into two fragments. It is one of the finest artifacts in the literary tradition of Dante Alighieri (1265–1321) and is named after its respective repositories in Florence’s Biblioteca Riccardiana and Milan’s Biblioteca Nazionale Braidense. Jacopo della Lana (ca. 1290 – ca. 1365), called “Lanèo”, authored one of the first and most highly acclaimed commentaries on the Divine Comedy ca. 1323–28, and thus not long after Dante’s death. His commentary enjoyed immediate and lasting success due to its use of vernacular Italian as opposed to Latin, which was more prevalent at the time. Entire passages of Lanèo’s commentary were later incorporated into the so-called Ottimo Commento or “Excellent Commentary”. The popularity of the commentary can be attested to by the hundreds of surviving manuscripts containing it, including this fine specimen of Gothic Italian illumination, which originated ca. 1350. 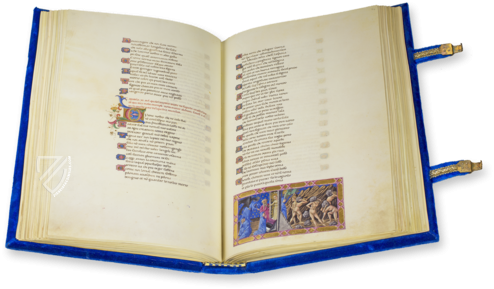