With his Divine Comedy, Dante Alighieri (1265–1321) not only created his magnum opus ca. 1307, but also founded Italian literature. Today, countless editions of this masterpiece are in existence, including the splendid specimen at hand from the second half of the 14th century, which was once owned inter alia by Cosimo de' Medici, Grand Duke of Tuscany. The Gothic script is neatly written in a single, uniform column with red and blue initials and is often accompanied by marginal notes in miniscule handwriting that were added at a later date. Expressive miniatures with a wonderful narrative quality illustrate the events of Dante’s journey through Hell, Purgatory, and Heaven.

Few authors have been as influential as Dante Alighieri (1265–1321), author of the famous Divine Comedy. This work counts among a group of ca. 15 large format Dante manuscripts and was originally written with Gothic script by a skilled scribe in the 1360’s. 130+ miniatures created by four artists adorn the text, which is written in one column and designed with large historiated initials and bas-de-page miniatures at the beginning of each canto. The commentary and notes in the margins of the text were added by an unknown Florentine merchant for the purpose of explaining the numerous hidden meanings and references to various events and characters contained in the poem. Written around the end of the 14th century, the small, neatly written notes used a system of letters and numbers to link the original text with his commentary. After passing through the hands of various unknown owners, the manuscript eventually came into the possession of the Grand Duke of Tuscany, Cosimo de' Medici (1519–1574).

Dante's Commedia is the first and greatest foundation of Italian national identity and literary civilization: not only for the immeasurable historical, linguistic, literary, and cultural importance of the work, one of the pillars – along with the Bible, the Homeric poems, the Aeneid, Shakespeare's tragedies, Don Quixote, and Faust – of the European and Western canon. The poem constitutes one of those rare works whose high level of inspiration and exceptional linguistic, literary, and structural complexity have not prevented it from becoming truly popular. It is simultaneously a difficult, profound and very high work of art that is also understood and loved by all. Much like us, Dante also lived in a historical period marked by profound and radical transformations at the sunset of the Middle Ages. In the total image of the world evoked in the three canticles of the poem, he was able to create a summa of medieval civilization in all its aspects, recreating it in renewed and original forms and thus knowing how to transmit its most vital elements to the culture of the following centuries.

The Work of Four Artists

Although it appears that one hand transcribed Dante’s original text, the décor was the work of at least four artists. The Inferno was illustrated by two miniaturists who worked at the time the codex was prepared, decorating it with lively, realistic figures with strong emotional intensity. On the one hand, they convey Dante's inventive power, while on the other they reflect the typically medieval obsession with the evil and diabolical, expressed by the infernal demons scattered throughout the pages. The illustrations of Purgatory and Paradise, on the other hand, were completed by two skilled illustrators who, towards the end of the 15th century, continued the work of the illuminators by decorating the last two canticles with a series of watercolor vignettes, characterized by a graceful stroke, soft colors, and images of strong didactic evidence.

Mysterious Journey to the Laurentian Library

The original owner is unknown, but the manuscript was written on paper instead of parchment, pointing to a patron who had a budget. Sometime in the next two centuries, a parchment sheet was inserted into the beginning of the book opposite the first page of text with the coat of arms of a yet-unidentified family. It consists of two golden dolphins separated by a wavy band of gold on a field of blue and is held up by a green dragon whose face is hidden by a black helmet. On top of its head, a centaur stands on its back legs with its bow drawn. After the manuscript was acquired by Cosimo de’ Medici, he had it rebound with embossed red leather over wooden boards with a central medallion and metal corner-pieces bearing the Medici arms surmounted by the grand-ducal crown and flanked by the initials C and M. This was done in preparation for the opening of the Laurentian Library to the public on June 11, 1571 – the Grand Duke's birthday. 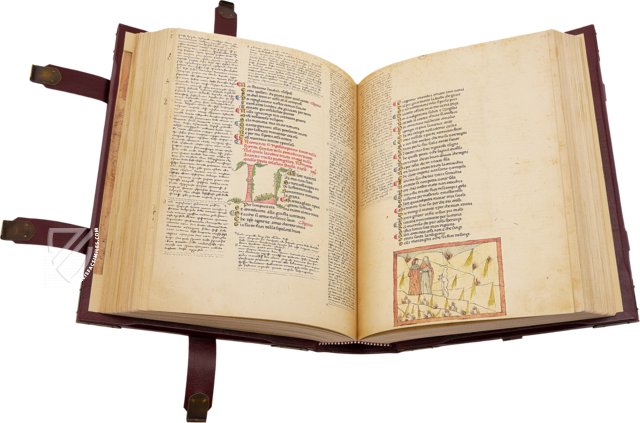 On the opening page of text, Dante appears in a large red “N” initial with a blue background with his book lying open on his lap. Despite his rich garments, including stylish red boots, Dante holds his head and visibly sags because he is weary of the mortal world and is about to undergo his journey through the afterlife. The small, tightly written notes in the margin contrast with the scribe’s clearly written text, the opening lines of which are written in expensive red ink. 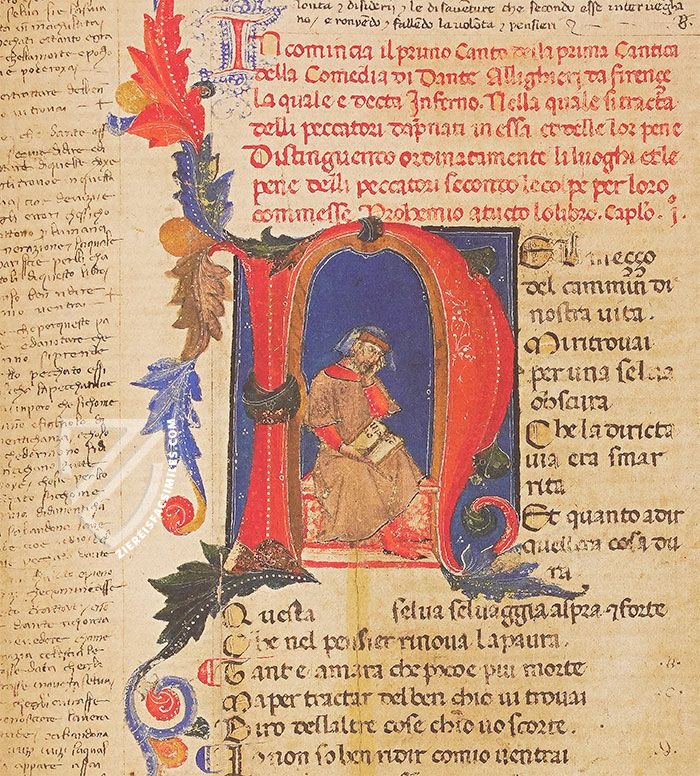 Virgil Confronts Demons before the City Gate of Dis

This page’s bas-de-page illustrates the second fundamental episode of the canto, that of the tense confrontation between Virgil (bearded and labelled with a “V”) and the demon in front of the gate of Dis. The animated gesture that accompanies Virgil's dialogue with one of the demons is probably intended to express the moment in which Virgil signals that he wants to speak with them.

Take note of Virgil’s lowered index finger turned towards the demon, a sign of confidential exchange, accompanied by the gesture of the other raised open hand, a typical gesture of dialogue. A group of demons witness this exchange from one of the city’s towers and one of them points down towards the two newcomers while another demon guards the open gate. 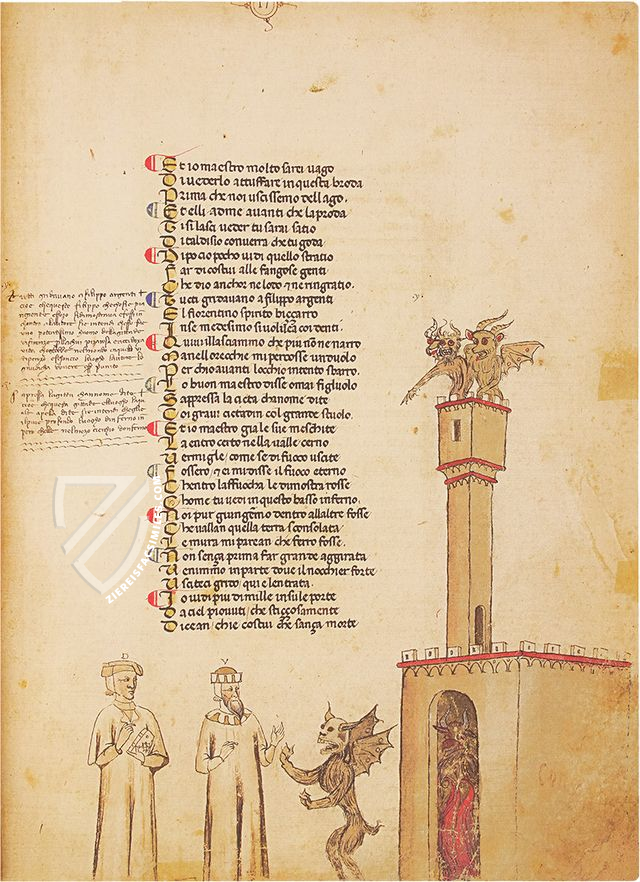 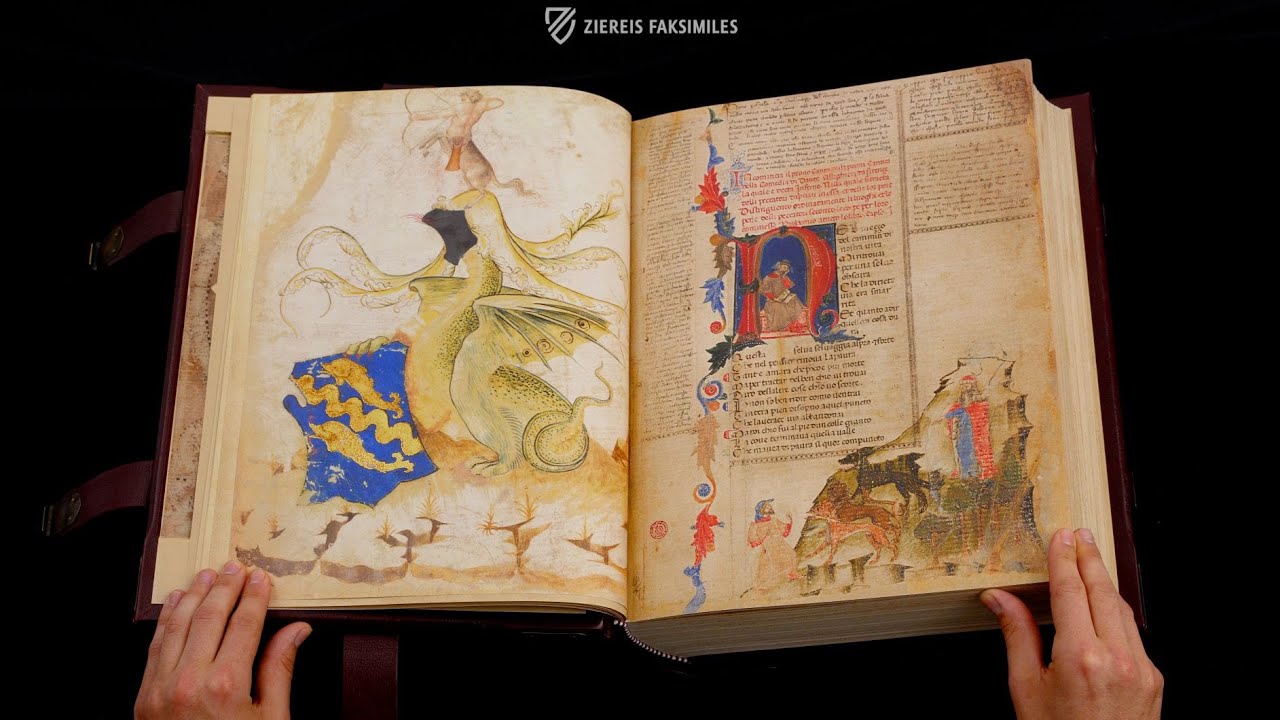 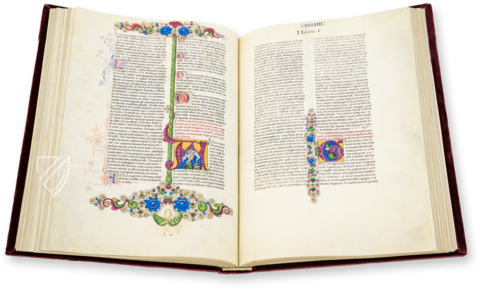 Commissioned by the wealthy Este court in Ferrara: Boccaccio's famous opus magnum and masterpiece of world literature in a magnificent Renaissance manuscript 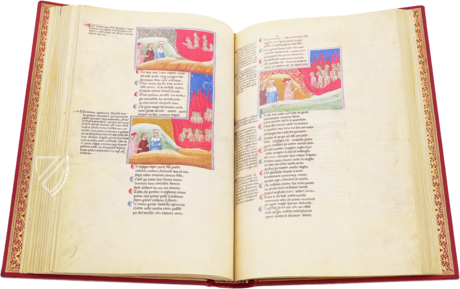 Dante's famous magnum opus in a golden masterpiece of the Italian Trecento: 253 innovative and beautiful miniatures from the hand of the gifted "Master of the Antiphonary of Padua"