The Abbey of Saint Peter in the Black Forest is a former Benedictine monastery founded ca. 1073 that moved twice before being settled at its current site near Freiburg ca. 1090. Thanks to numerous donations of money and land, St. Peter’s grew wealthy, which is evidenced by the sumptuous and sophisticated illumination of the Romanesque manuscript at hand. Created in an Alsatian monastery ca. 1200, evidence of the hands of two masters can be seen in the manuscript’s twelve refined and well-designed full-page miniatures set within thick patterned frames. The colors red, blue, green, and gold dominate the imagery, which features monumental and somber, yet expressive figures depicted in scenes with luminous solid blue backgrounds. Although clearly influenced by Ottonian illumination, they already exhibit characteristics of the nascent Gothic style. Twelve decorative and sometimes historiated initials with leafy vines, dragons, and human figures introduce the artfully written, red-and-gold-framed text excerpts from the Gospels.

The Gospel Book from St. Peter’s Abbey in the Black Forrest is unique among the book-type because rather than containing the liturgy for performing mass on Sundays, it is a luxury manuscript that only contained texts for the twelve most important festivals of the ecclesiastical year. It was likely intended to be displayed for the public in order to exhibit the wealth and sophistication of the monastery and its community. Each festival is richly adorned by a full-page miniature, a decorative (sometimes historiated) initial, and a gold and red frame around the text. However, gold leaf was not used to create the frames but rather a reddish shimmering gold bronze that is more subdued than the highly polished gold leaf used for the miniatures and initials. The frame thus has a restrained appearance and serves only as a companion to the text and other decorative elements. This manuscript represents a rare and wonderful blend of artistic styles from the 12th and 13th centuries.

Like most of the 200 manuscripts that were once part of the abbey’s library, little is known about the origins of this Gospel Book and it took some detective work by researchers to determine where it was made. Elements of the manuscript such as the calendar allowed researchers to determine that it was originally created for an Alsatian monastery patronized by St. Peter and St. Paul. The only monastery in the region meeting this criteria is the Benedictine Abbey of Weißenburg, which as a Hirsau reform monastery was connected on the one hand with monasteries in the Mass-Moselle region such as Echternach, and on the other hand with the bishoprics of Speyer and Strasbourg, which explains the many artistic influences that can be seen in the Gospel Book. With the help of the calendar, it has been determined that the two strange figures in the background of the miniature for All Saints’ Day depicting the Sermon on the Mount (fol. 12v) are the Syrian saints Sergius and Bachus, martyred 4th century Roman Christian soldiers whose relics were transported from Rome to Weißenburg by Abbot Otgar (d. 847). This precious manuscript is believed to be the only surviving magnificently adorned manuscript from the scriptorium of Weißenburg Abbey.

A Mix of Styles and Influences

The splendid illumination of the manuscript exhibits influences from various sources including a book of pericopes from Paris, a missal from Mainz, the iconography of the Hortus Deliciarum, a group of ivory carvings from Cologne made during the first half of the 12th century, and the stained-glass windows of Strasbourg Cathedral, which were completed around the same time as the manuscript. Influences from the Hortus can be seen in the step motifs of approaching angels, the structure of their fall of folds, and the depiction of tiled roofs. Similarities with Strasbourg´s windows, which were themselves influenced by Byzantine mosaics and ivory panels, can be found in the elegant figures of St. John and the Judgment of Solomon. They share similar head shapes with wide eyes and noses with strong bridges, turban-like headscarves for the women, and youths with short wavy hair parted in the middle. This manuscript thus represents the best of Alsatian and Upper Rhenish art during the 12th and 13th centuries.

St. Peter's Abbey in the Black Forest had a tumultuous 700-year-history between 1093, when it was founded, and 1806, when it was dissolved in the course of Secularization. It suffered from devastating fires in 1238 and 1437, was completely destroyed and plundered during the Thirty Years’ War, and burned again in 1678 before being rebuilt in the Baroque style. Naturally, these terrible events destroyed the abbey’s library time and again.
Construction of the present library, which was designed by Peter Thumb (1681–1767), began in the late 1730’s but was stalled for eleven years due to occupation by the French army and resistance from the peasants who were legally obligated to provide labor for its construction. However, once complete, the beautifully painted library filled with statues was considered to be one of the most beautiful Rococo rooms in the region. The art-loving bibliophile Abbot Philip Jakob Steyrer (1715–95) sought to rebuild the collection of the library, which numbered only 1,000 books when he was appointed abbot. By the time of his death, the library housed around 20,000 books and the heart of the collection consisted of 200 medieval manuscripts including this fine Gospel Book. 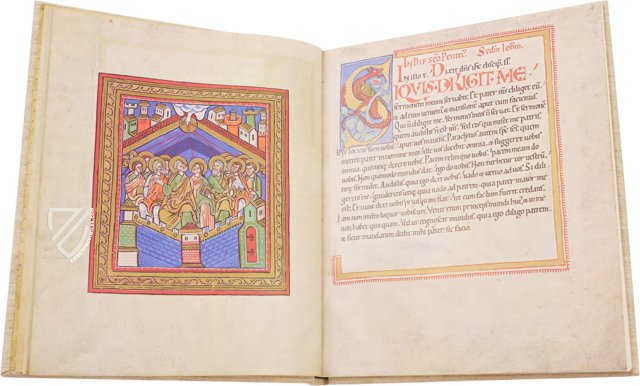 The Martyrdom of Saint Paul

Various ancient sources recount how Paul the Apostle was arrested and brought to Rome in the wake of the Great Fire of Rome during the Neronian Persecution. They claim that he was beheaded like John the Baptist around the same time that Saint Peter was martyred and this is the common image of him in martyrology. A legend developed that Paul was killed at the Aquae Salviae and after he was decapitated, his severed head bounced three times and water rose from wherever it touched the ground. Today this place is marked by a church known as San Paolo alle Tre Fontane or “St Paul at the Three Fountains”.

Labelled In Nativitate Domini on the opposite page, as are all the miniatures in this work, this fine miniature shows the Holy Family accompanied by three additional female figures, probably relatives or midwives who assisted in the birth. Joseph is depicted wearing a pointed Jewish hat while all the figures have exhausted expressions on their face with eyes that they can barely hold open.

In order to depict the cow and donkey lying next to the manger in this crowded composition, the artist drew them floating behind it almost as though they were resting their heads on the sides. Two angels appear under the arches of the creatively designed architectural background and point to the newborn Messiah. Although the Three Kings have not arrived yet, the star that guides them glimmers in the distance. 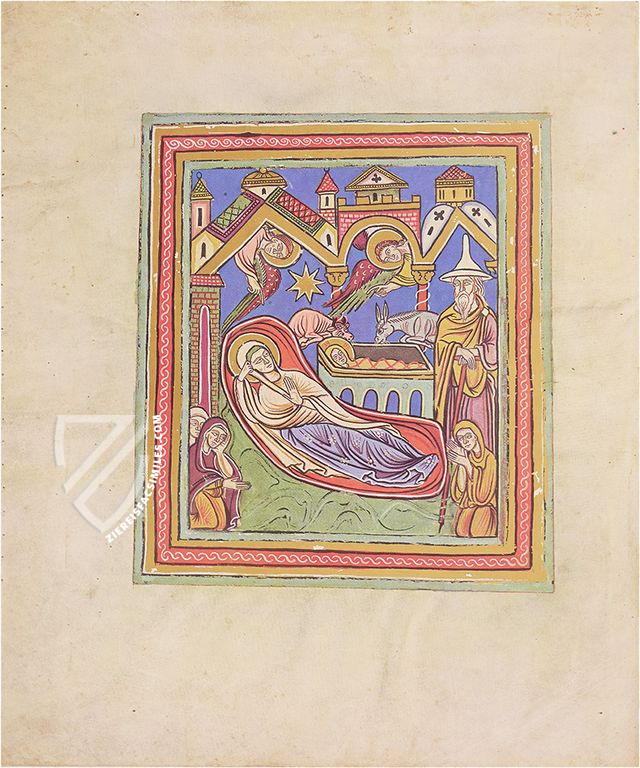 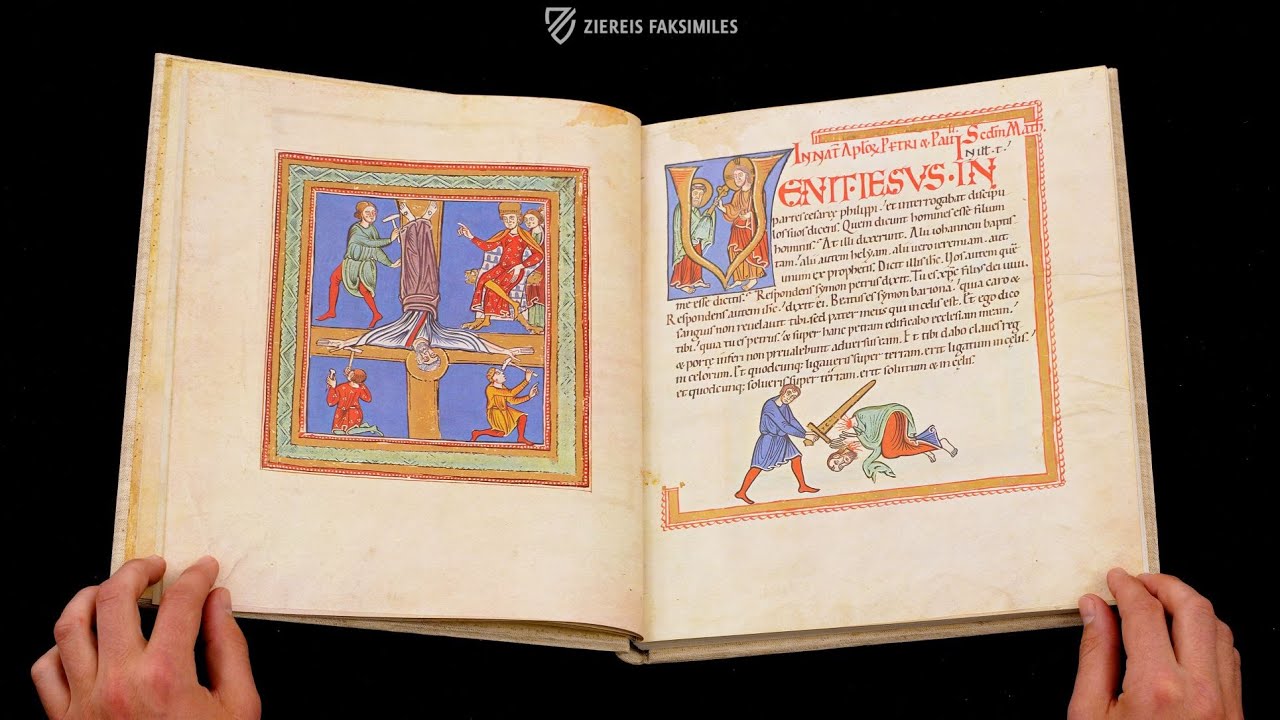