This gorgeous and stylistically unique bible is stored in the British Library in London. The so-called Holkham Bible, named after one of its 19th century owners, is a work of 14th century English illumination. This unique Bible, whose focus is on the miniatures that are accompanied by the text, originated as the commission of an unknown Dominican, who is beautifully depicted in the first miniature. Expressive painting and an admirable sense of color distinguish the style of the London illuminator who was responsible for this masterpiece. In this way an unusual, impressive example of the English book art of the Middle Ages came into being – the Holkham Bible!

The Holkham Bible is a unique picture bible, which nonetheless does not skimp on text. The imagery and text are closely linked, so one often finds banderoles in the miniatures. The text – in contrast to what is typical in medieval manuscripts – was first inserted after the paintings. This unusual manuscript probably originated ca. 1327–1335 in London. The patron was an unknown Dominican monk, who is drawn at the beginning of the manuscript in a gorgeous miniature: he arranges for the commission with the miniaturist and receives the assurance from his counterpart that he will give him his best!

231 miniatures on a total of 84 pages keep this promise. Gorgeous miniatures illustrate the Old and New Testament, whereby two half-page miniatures usually decorate a page one above the other. Nevertheless, there are also numerous full-page miniatures. Expressive figures in dramatic compositions distinguish the exceptional visual adornment. The miniaturist created a whirl of figures, landscapes, and forms. This mix makes the Holkham Bible stylistically unique and bespeaks the impressive skill with which it was made!

The biblical scenes of the miniatures are imbedded in medieval London, with its technical innovations, hustle and bustle, and its impressive architecture. The observant beholder cannot fail to notice the fine – British? – humor that the artist displayed as he illustrated the common biblical stories according to his own ideas. Thus, the Christ child plays gleefully with the sun’s rays, and Herod peeks under Salome’s dress while she is dancing wildly. The background of the miniatures is typically covered as though with wallpaper, an atypical characteristic for the time of its creation. This special manuscript earned its name from one of its owners: Thomas William Coke, 1st Earl of Leicester, whose residence was called Holkham Hall. The Holkham Bible finally left the library of Holkham Hall in 1952 and came into the possession of the British Library in London. 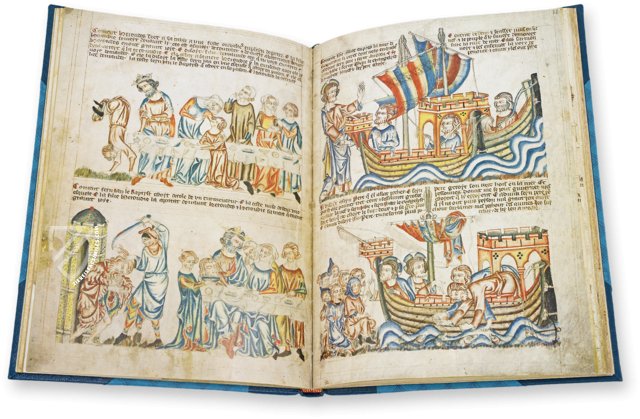 Aside from its uniqueness and high level of artistic refinement, this miniature attempts to reconcile the two accounts of the legend of the Great Flood, which contradict one another in several ways. Aside from the span of days, accounts vary as to whether Noah dispatched a raven or a dove to search for dry land. The London-based artist responsible for this work split the difference and shows Noah releasing one of each as dead people and animals float by in the waters around the Ark. 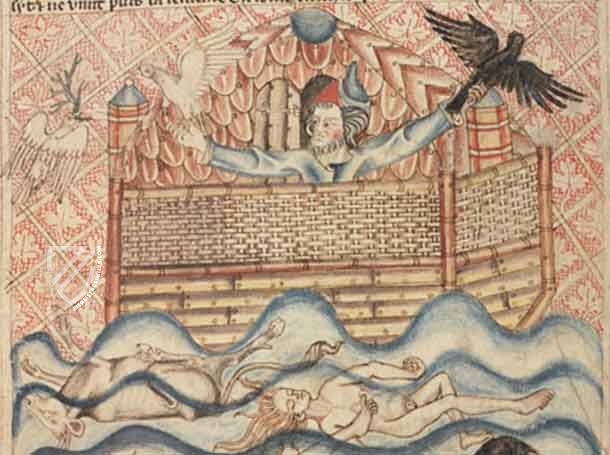 This outstanding miniature fits a bestiary’s-worth of fauna onto a single page and is a fine example of the masterful and unique illumination of this manuscript. Outstanding shading in red, blue, and green colors this busy but expertly designed and executed image, which is backed by a simple but painstaking diamond-patterned background.

God is depicted rosy-cheeked and surrounded by animals that have been rendered with a surprising degree of realism, even the unicorn. With a wave of his right hand, God creates the birds, which fly above his head and perch themselves in trees, including an owl looking inquisitively at the beholder. Finally, two waterfowl are pictured on the banks of the river at God’s feet, in which fish also swim by. 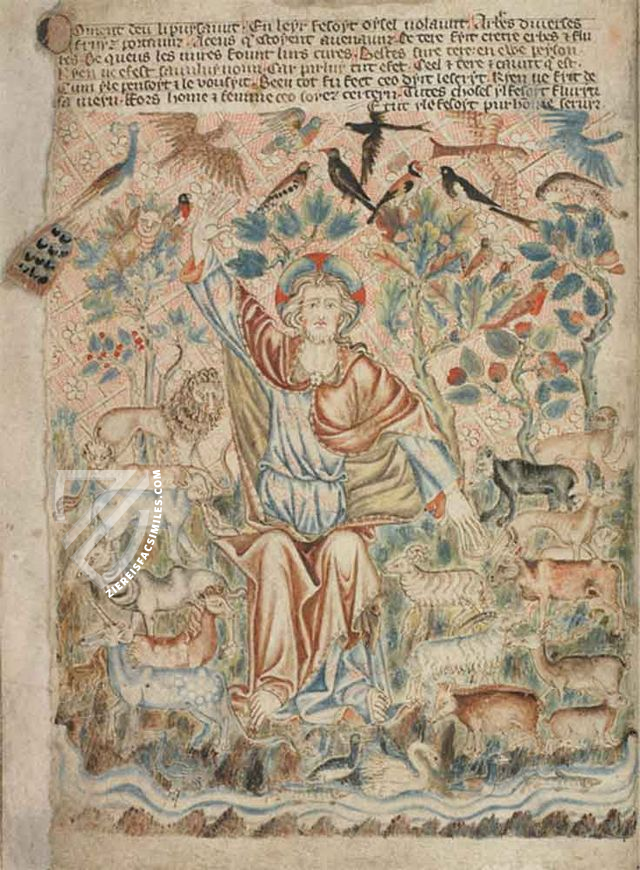 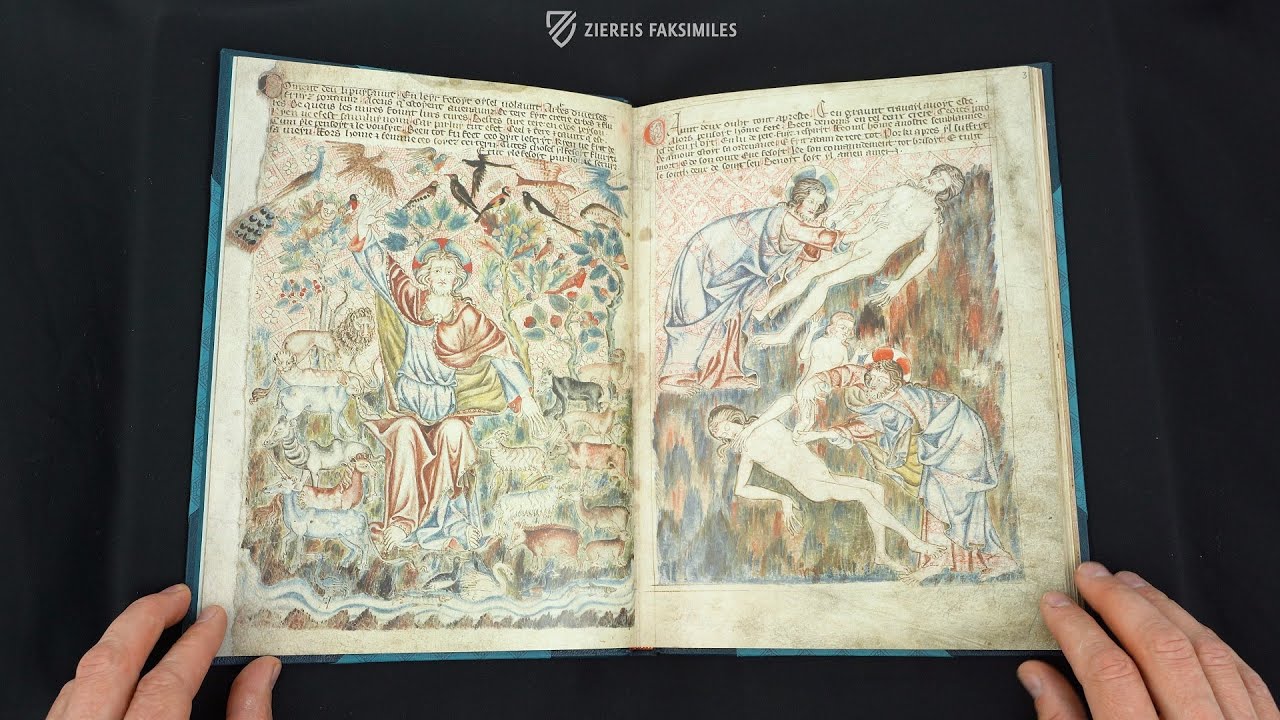 Publisher: The Folio Society – London, 2007
Limited Edition: 1750 copies
Binding: Half leather, decorated cloth, gold decoration with raised bands on the spine and pages with gilded edges
Commentary: 1 volume (162 pages) by Michelle P. Brown
1 volume: Exact reproduction of the original document (extent, color and size) Reproduction of the entire original document as detailed as possible (scope, format, colors). The binding may not correspond to the original or current document binding.
Price Category: € (under 1,000€)
Edition available
Price: Log in here!
Order / Ask a Question
You might also be interested in: 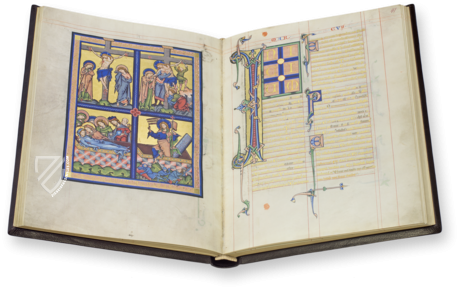 A German Codex Aureus in the Mainz cathedral treasure: written with golden ink and adorned with bright miniatures in a jagged style