This 15th century manuscript is called La Mirabile Visione or The Miraculous Vision and is a treatise regarding the Antichrist, Last Judgement, Heaven, and Hell that is gorgeously adorned in the French Renaissance style. 83 miniatures including 16 full-page miniatures illustrate the Apocalyptic story and have made this masterful manuscript the cherished possession of various noteworthy bibliophiles. This is also a historically valuable witness to the spirit of the Renaissance that synthesizes the religious, humanistic, and artistic values of the period. Witness the horrors and wonders of the Apocalypse and the final triumph of good over evil!

This fantastic treatise on the Apocalypse is a feast for the eyes and a rejuvenation for the soul. It contains a transcription of the text of the Livre de la Vigne nostra Seigneur or Book of the Lord's Vine, a reference to the parable of vineyard workers found in Matt. 20:1-16. This text is then enriched by quotations from the Bible and the saints Augustine, Jerome, Gregory, Bede, and Bernard. It is adorned by 83 miniatures, 16 of them occupying an entire page. The manuscript is also decorated by numerous red, blue, and gold initials as well as an artful floral border populated by birds and insects framing the first page of text. Nonetheless, La Mirabile Visione contains some of the most extraordinary and terrifying images of the Apocalypse and is endlessly fascinating to researchers and private collectors alike.

Rise and Fall of the Antichrist

The narrative follows the story of the Antichrist, his deceit of humanity, and his war on the Church after he has turned the peoples of earth against it. He is depicted in one miniature as a false pope arriving in Jerusalem, which is just one of several signs of growing discontent within the Catholic Church that boiled over into the Reformation a generation later. After God destroys the Antichrist and brings an end to his persecutions of the faithful, humanity endures 15 signs of the coming end of the world and the Last Judgement. The book is full of violent imagery, particularly with regard to the suffering of the blessed on the orders of the Antichrist and the punishment of the damned after his downfall.

The Zeitgeist of the 15th Century

The text and imagery of the manuscript speak to the anxieties of the 15th century, a period of recovery and rebuilding from the trauma of the war, famines, and plagues of the previous century. It was an era that witnessed both a flowering art and an explosion of literature in the wake of Dante’s Divine Comedy as well as a period of ongoing social upheavals, religious strife, and increasingly brutal warfare. The themes explored in the text would have been extremely captivating for a contemporary audience and continue to be relevant to the modern reader living through our own trying times. Therefore, the work could be seen as an ideal blend of Dante and Giotto that was created shortly before the birth of Michelangelo.

Originally created in Southeastern France by Carthusian monks, this manuscript has passed through the hands of various prominent bibliophiles over the centuries. The manuscript stored today in the University of Oxford’s Bodleian Library under the shelf mark MS. Douce 134 is actually the second of two volumes and the colophon of its sister manuscript bears the date March 5th, 1463 and attests that the second volume had also been completed at the time. The name “Dominus Johannes Blathe” is inscribed in the binding, who likely owned it in the 16th century. It then passed through the hands of Gilbert Paignon Dijonval (1708–1792) and Charles-Gilbert, viscount Morel de Vindé (1759–1842) before being sold to a certain Robert Triphook in April of 1823. The book was then purchased in May of 1832 for the sum of £19 15s by a Mr. Payne, who sold it the next month to the famous collector Francis Douce (1759–1834), who in turn bequeathed it to the Bodleian Library upon his death. 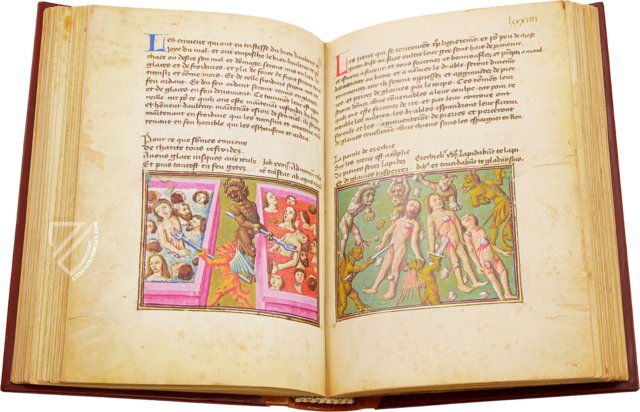 The Twofold Nature of the Antichrist

Dressed in cloth of gold and holding a scepter, the Antichrist is shown with two faces: a fair face that he uses to seduce the peoples of the earth and a devilish visage revealing his true nature. Three figures stand in the foreground including two prosperous-looking farmers holding tools and a richly dressed noblewoman who is gesturing as though giving them instructions. The scene includes many details such as the headgear of the three people and the hardware on the front door of the castle. 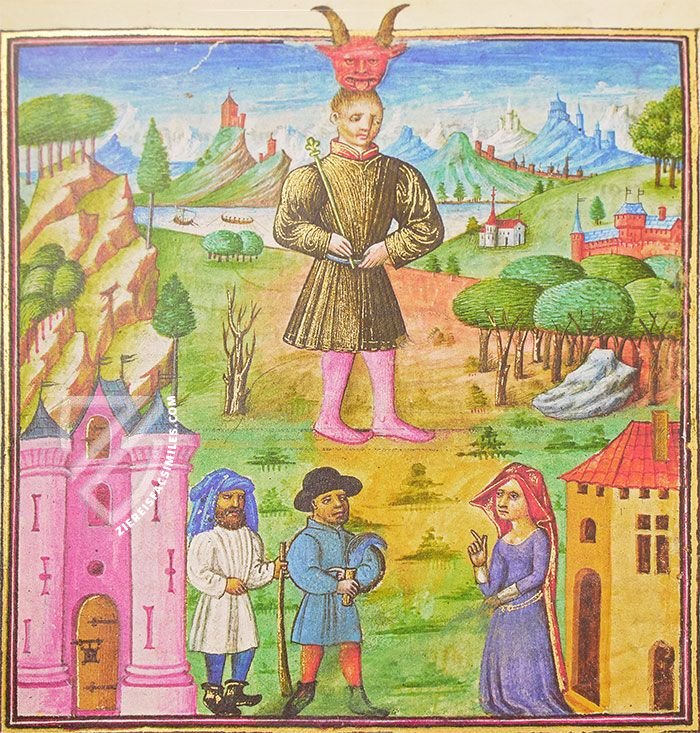 Judgment of Sinners and Demons

Floating in the sky and revealing the wounds of stigmata while dressed only in a blue cloak, Christ is shown seated in judgment and flanked by the 12 Apostles, who act as heavenly jurors. The Virgin Mary stands over the right shoulder of Christ, perhaps to council mercy, and is adorned with a halo in the same manner of her son and the Apostles. An angelic audience stands back and watches the proceedings.

Those who are on trial stand naked and await their turn to face divine judgment. Among them can be seen two horned demons, a woman with long blonde hair, a tonsured monk, a pope wearing a miter, and three figures who appear to be dancing. While the human figures have serious, fearful expressions, the demons have wide, devilish grins. 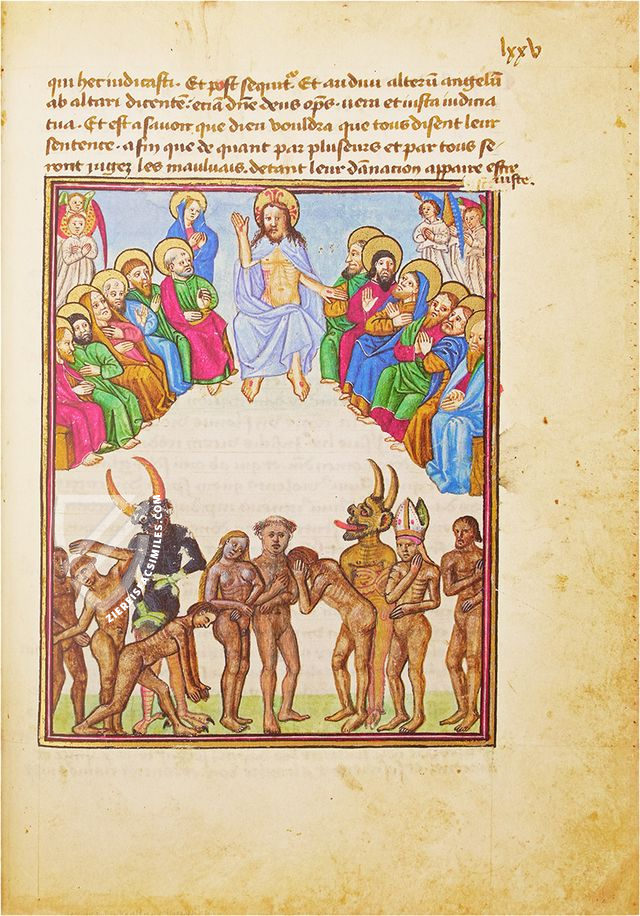 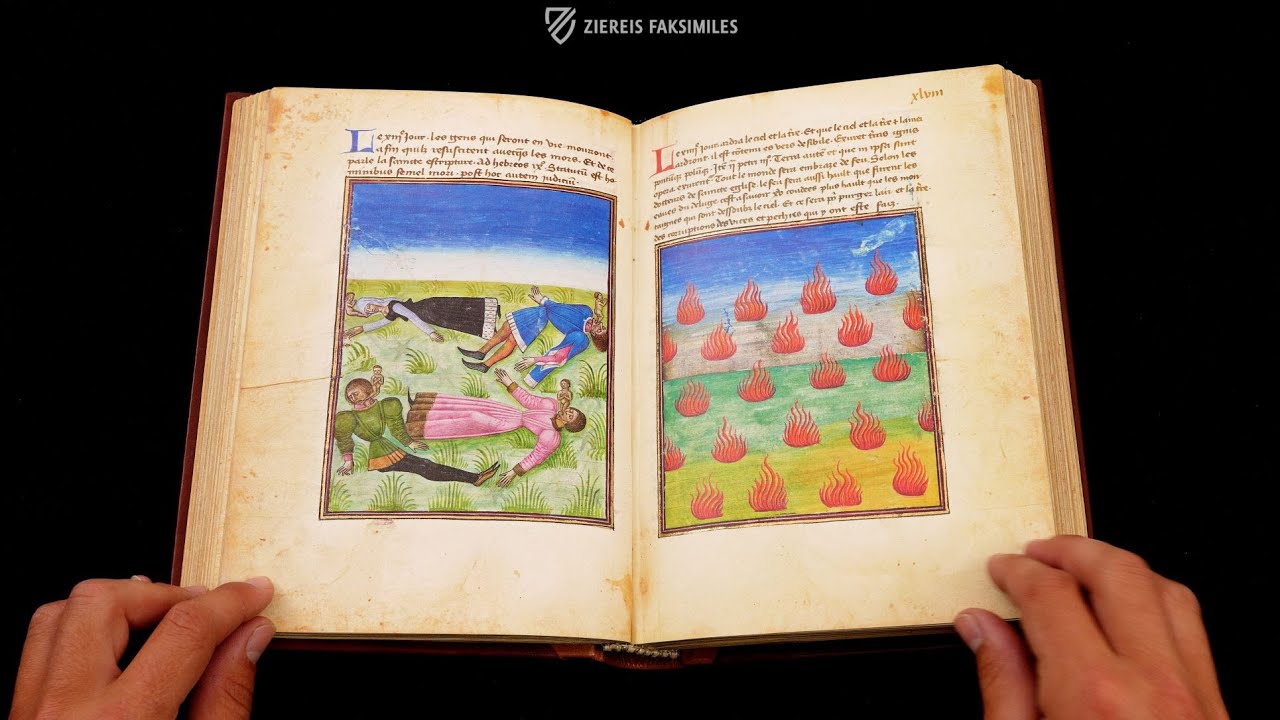 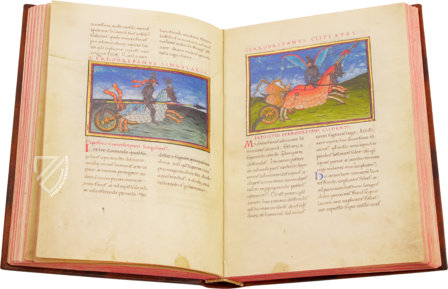 The oldest copy of a work lost today: the "List of Offices" of the Late Roman Empire, magnificently illuminated for the Bishop of Padua 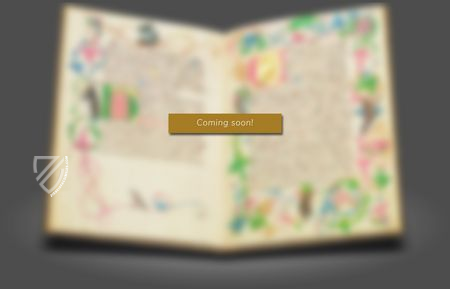 A manuscript as a luminous mirror for the beauty of the cosmos: the first astronomical poem of Italian humanism with gorgeous illuminations commissioned by a learned English count