This luxuriously furnished copy of John Lydgate's Lives of Saints Edmund and Fremund was created to commemorate the visit of King Henry VI to the Abbey of Bury St. Edmunds at Christmas 1433. It is a poem concerning the 9th century Anglo-Saxon King Edmund of East Anglia who was martyred by Danish Vikings as well as his nephew, Fremund, who avenged his death. The narrative is written in English and illustrated with 120 masterful miniatures, making it simultaneously a monument to the development of the English language and the refinement of 15th century English book art. A splendid color palette with the generous use of gold has been applied not only to the miniatures but also to the decorative initials and floral tendrils.

This presentation copy of the Lives of Saints Edmund and Fremund by John Lydgate (ca. 1370 – ca. 1451) is a rare “double saint’s life” that was created by Robert Pygot and other artists between 1434 and 1439 as a gift to King Henry VI (1421–71). Written in English, the poem is gorgeously illustrated by 120 miniatures including two full-page miniatures and numerous decorative initials including one historiated initial. They are true Gothic masterpieces executed with great attention to detail including facial expressions, garments, armor, weapons, splendidly patterned floors and backgrounds, as well as everyday objects. The manuscript is considered to be a prime example of the East Anglican school of English book art and is one of the jewels of the British Library’s impressive collection of illuminated manuscripts. It is a fascinating specimen that is relevant not only to art history, but also to the study of medieval hagiography and 15th century English paleography.

Unlike most hagiographic works, which focus on the life of one saint, this poem relates the lives of St. Edmund and St. Fremund. The impetus for the story is the arrival of the Great Heathen Army in 865, which was led by the sons of Ragnar Lodbrok who sought revenge for the death of their father and intended to conquer the four Anglo-Saxon kingdoms. King Edmund of East Anglia was defeated in battle by them in 869 and according to legend was shot full of arrows in the manner of St. Sebastian before being beheaded. According to the poem, St. Fremund was a hermetic saint and was the nephew of Edmund who was called upon by God to take vengeance upon the Vikings. In once instance, Fremund and 24 others defeat a Danish army with the help of angels. He too is eventually beheaded by the Viking Oswi but does not die and his severed head continues to talk to Oswi before he rises to pick it up, washes his wounds, faces east, and dies.

A Gift for a King

On Christmas Eve 1433, Henry VI, the 12-year-old King of England, visited the Abbey of Bury St. Edmunds where he stayed until Easter the following year. He was admitted to the abbey’s confraternity at the end of his visit and to cement the abbey's relationship with the King, Abbot William Curteys commissioned a luxurious manuscript depicting the life of the abbey’s patron saint – Edmund the Martyr – as a royal gift. John Lydgate, a monk at the abbey and the preeminent poet of the 15th century, translated the legend into English and organized the poem into rhyme royal stanzas with some eight-line “monk’s stanzas”. Henry VI is depicted in two miniatures: one showing him kneeling before the tomb of Saint Edmund and a presentation miniature of him receiving the codex. This marvelous manuscript remained in the King’s library until after his deposition and passed through several hands before reappearing in the library of Henry VIII and was eventually sold to the British Library. 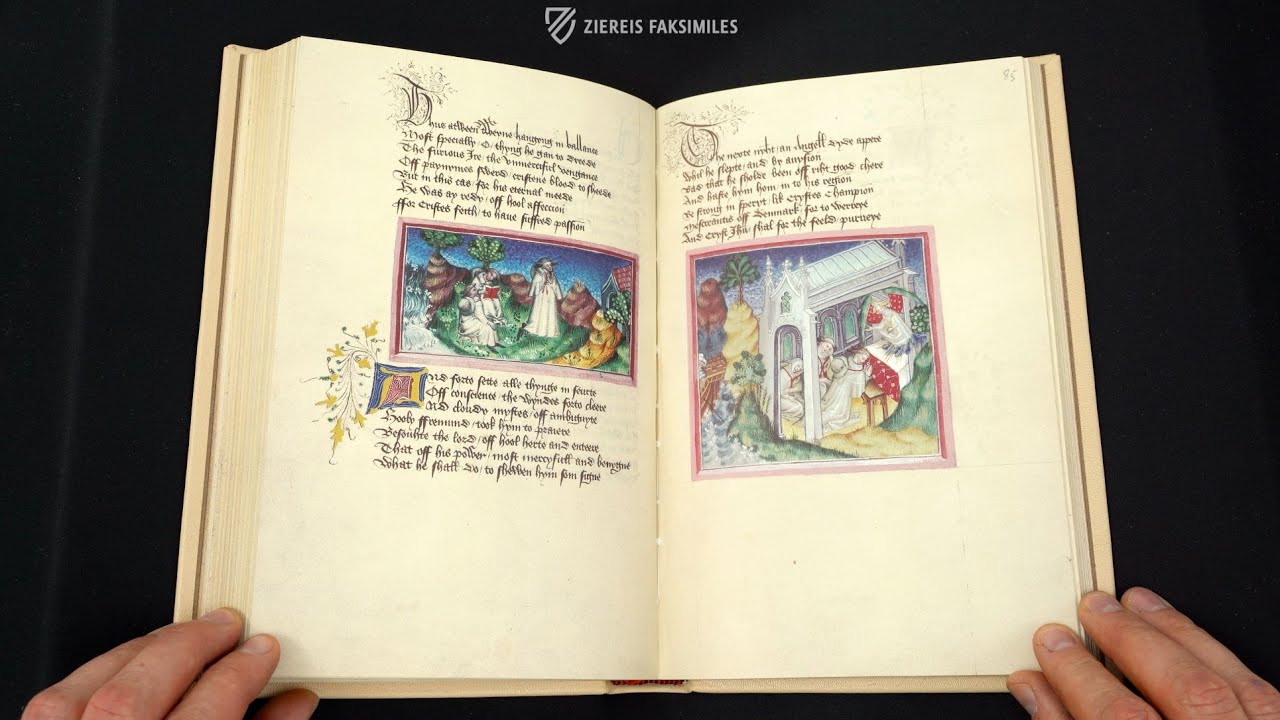