The Master of Modena Hours was manufactured in Milan ca. 1390. The illuminator Tomasino da Vimercate, a student of the great Giovanni de Grassi, was responsible for the design of the precious codex. The manuscript belongs among the most beautiful Gothic codices worldwide and is incredibly richly ornamented. Today it is housed in the Biblioteca Estense Universitaria.

Some of the most splendid masterpieces of illumination worldwide originate from Italy at the end of the 14th century. The greatest art studios of their time tended to be located in Milan particularly. During the reign of Gian Galeazzo Visconti (1380–1402) Milan enjoyed an economic and cultural flowering, which was precipitated by the pronounced bibliophilia and patronage of masterpieces of illumination by these princes. One of the most precious among these codices is the Master of Modena Hours. This manuscript is one of the most beautiful and elaborately designed manuscripts to ever be produced in Italy. It is comprised of 544 pages with 28 full-page miniatures, whereof 15 are encompassed by fine bordures of plant tendrils. Additionally, the manuscript is decorated by ca. 2,500 illuminated initials, most of which are richly furnished with gold leaf.

The Master of Modena Hours originated during the reign of Gian Galleazzo Visconti. Under Gian Galleazzo, the principality was led by a single man, who proved to be a strategically-thinking diplomat. Similarly, the wealthy ruler developed into a generous patron of the arts and sciences. The most famous painters, sculptors, musicians, and architects – in short, the supreme line-up of artists in Europe – were employed at the court of the Visconti. The Master of Modena Hours was commissioned by Balzarina de Pusterla. He was a scion of the House of Pusterla, one of the oldest patrician families in Venice. The Pusterlas stood in high favor with the House of Visconti.

The codex is one of the greatest masterpieces of gothic illumination. The beautiful, dreamlike illustrations are attributed to the illuminator Tomasino da Vimercate, who worked at the Visconti court at the end of the 14th century. Vimercate was part of the staff in the workshop of the master Giovanni de Grassi. De Grassi was a prominent artistic personality at the Visconti court. He was a genius architect, sculptor, and painter and prepared the way for an autonomous painting style that transcended the standards of illustration. Above all, he is famous worldwide for his work as the master builder of the Milan Cathedral to this day. The genesis of the Master of Modena Hours in the workshop of de Grassi is discernible from its specific characteristics.

The incomparable artistry of Tomasino da Vimercate, one of Giovannino de’ Grassi’s famous students, manifests itself for us in great detail. The miniaturist’s elegant lines, his delicate contours, as well as the intensely colorful and simultaneously filigree ornamentation of the picture frames and backgrounds are truly unique in the courtly art of the outgoing 14th century. So, one encounters luminous colors and precious decorative elements, a halfway-naturalistic style of depiction, and an astonishingly refined painting technique, as was typical for the miniature painting and decorative art of de’ Grassi’s prestigious workshop. The full-page miniatures are particularly heady in their design. Two of these miniatures illustrate the intercession prayer of St. George’s battle with the dragon, the model of the knighthood of saints, the soldiers of Christ, in textual frames. Not only are the golden nimbus and red St. George’s cross conspicuous, but the green dragon is as well, who – already mortally wounded – is turning back to his attacker in profile. This method of depiction is truly revolutionary and groundbreaking for that historical epoch. 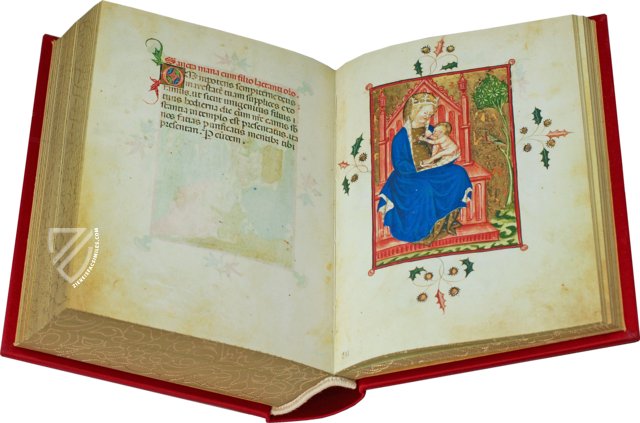 This splendid historiated initial is framed by shimmering gold leaf and although the image of the archangel Gabriel appears to be somewhat water damaged, it is an exemplary specimen. The Virgin Mary is depicted with clear facial features and pink cheeks as she kneels with her own prayer book. A dove symbolizing the Holy Spirit is suspended overhead against a wonderfully patterned blue background. A hooded face to the right of the text has red/blue/green tendrils coming out of its mouth.

The image of St. Sebastian with his arms tied behind his back, pierced with numerous arrows, and an anguished look on his face, is one of the most popular in art history. After successfully concealing his Christian faith, Sebastian was outed in 286, and the Emperor Diocletian sentenced him to die by being bound to a stake and shot with arrows.

This magnificent Gothic miniature depicts Sebastian tied to a Roman column and peppered with arrows. Three archers with round cheeks and expressive faces draw their bows opposite Sebastian, while an angel flies to bring him the crown of martyrdom. The scene plays out in a luscious green field with wildflowers before a wonderfully patterned background with gold leaf, green dots, and red and blue crosses. 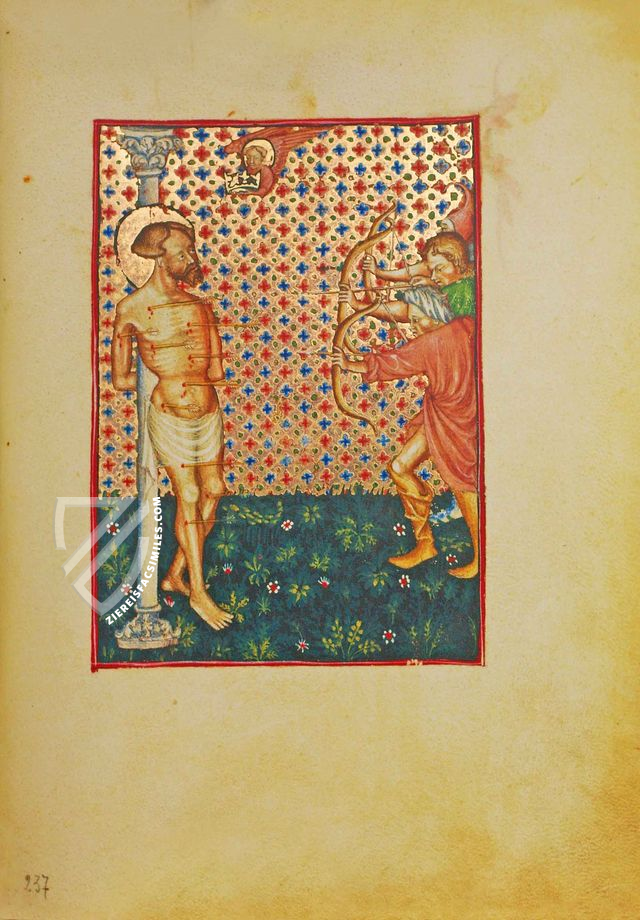 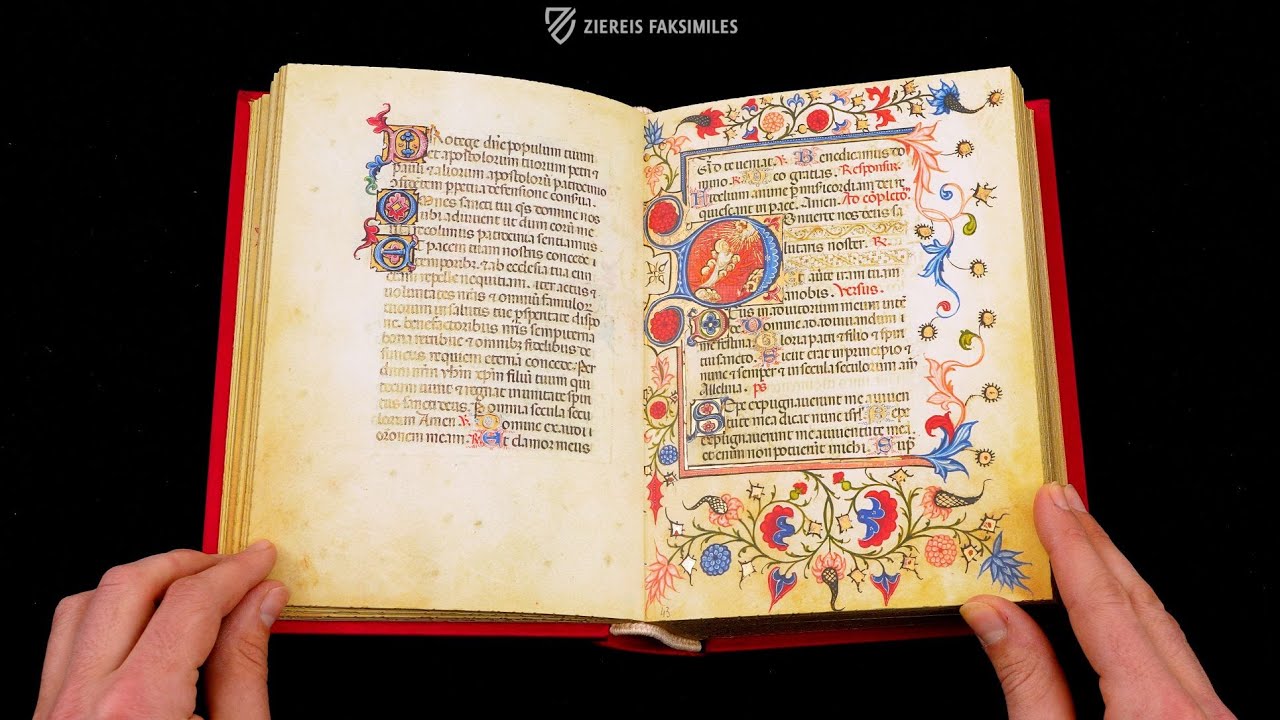 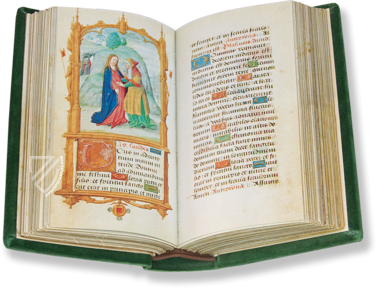