This gorgeous botanical and medical manuscript is a true masterpiece of Renaissance book art created ca. 1564-84 by Gherardo Cibo, an artistic genius and botanist in his own right. It contains the text of the Discorsi, an Italian translation of the ancient text De materia medica by Dioscorides in addition to a selection of medical and botanical texts by the Pietro Andrea Mattioli, a famous physician from Siena. Cibo illustrated the work with more than 160 remarkable pictures of plants and landscapes that rank amongst the most beautiful of the Renaissance.

The ancient text De materia medica by Dioscorides (ca. AD 40-90) is a magnum opus of pharmacology and remained a fundamental medical reference well into the Early Modern period. This magnificent specimen is a superb Renaissance manuscript created ca. 1564-84 by the artistic genius and botanist Gherardo Cibo (1512-1600) that features an Italian translation of the work in addition to a selection of medical and botanical texts by Pietro Andrea Mattioli (1501-1577), a famous physician from Siena. 160+ full-page miniatures consisting of a detailed depiction of each plant set within in natural environment adorn the text and possess an artistry comparable to contemporary panel paintings.

The so-called Dioscorides manuscripts trace their roots back to an ancient doctor. Pedanios Dioscorides Anazerebus was a doctor and naturalist who was born in Anazarba in Asia Minor in the 1st century. He was active as a physician in the Roman army under the Emperors Claudius and Nero. With his treatise concerning the medicinal effects of plants, but also animal and mineral materials, he composed the primary work of early medicine and the template and example for medieval pharmacopeias. De materia medica enjoyed great fame both in the Orient and the Occident with translations in numerous languages.

Mattioli’s Discorsi is his Italian translation of Dioscorides’ De Materia Medica (1st century AD) with the addition of lengthy commentaries based on his personal experience and on popular and learned medicine. Mattioli’s book was extremely useful for physicians and herbalists not familiar with classical languages. Cibo illustrated the work with more than 160 remarkable pictures of plants and landscapes that rank amongst the most beautiful of the Renaissance. He was an avid reader and admirer of this book by Mattioli and copied entire passages in neat script, adding his own comments, anecdotes, legends, and – more importantly – illustrated them with delicate and lifelike botanical images. His splendid miniatures feature different species of plants standing out in the foreground against the brightly colored landscapes of their natural habitat. Cibo’s manuscript, with its dazzlingly beautiful miniatures, is an unusual and personal version of Mattioli’s printed work and a highly original artistic contribution to both nascent modern science and the history of botanical and landscape illustrations. 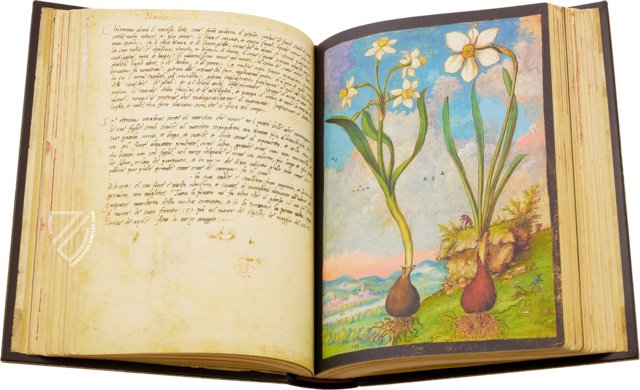 Many of the plants found in this manuscript are depicted enlarged in front of naturalistic landscapes reflecting the environment in which they might be found. This miniature of Pulmonaria, commonly known as lungwort, shows a brown rabbit foraging for food among the colorful flowers in the foreground. In the background, a boat full of people is ferried across the river where more figures wait for them. A monastery surrounded by trees is depicted on the opposite bank. 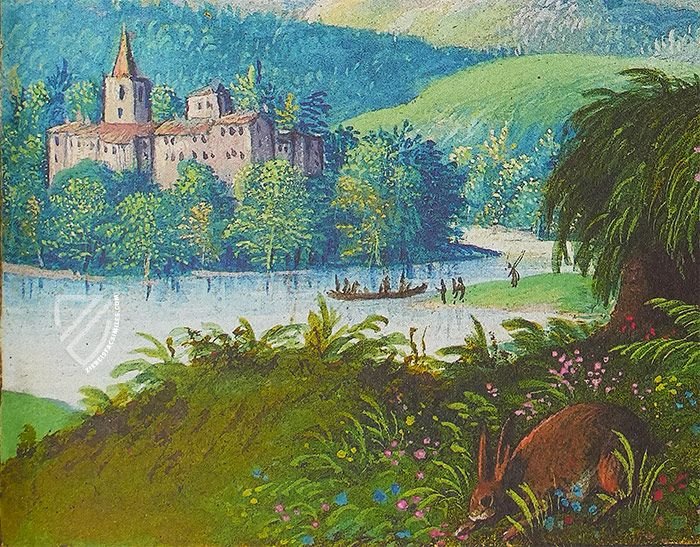 Solanum is a genus of flowering plants including crops such as the potato, tomato, and eggplant as well as varieties Halicababum. It has broader leaves than other species of solanum with stalks that bend towards the earth after they become heavy with fruit, which consist of round pods resembling reddish bladders, hence the common name “bladder cherry”.

The fruit of the Physalis alkekengi is not used for cooking but can be used as a diuretic and as a cure for jaundice. Its juices are squeezed from the fruit and then dried in the shade to be kept for future use. Aside from its medicinal purposes, it is a popular ornamental plant that is found in gardens from Europe to Japan, where the lantern-like fruit is part of the traditional Bon Festival. 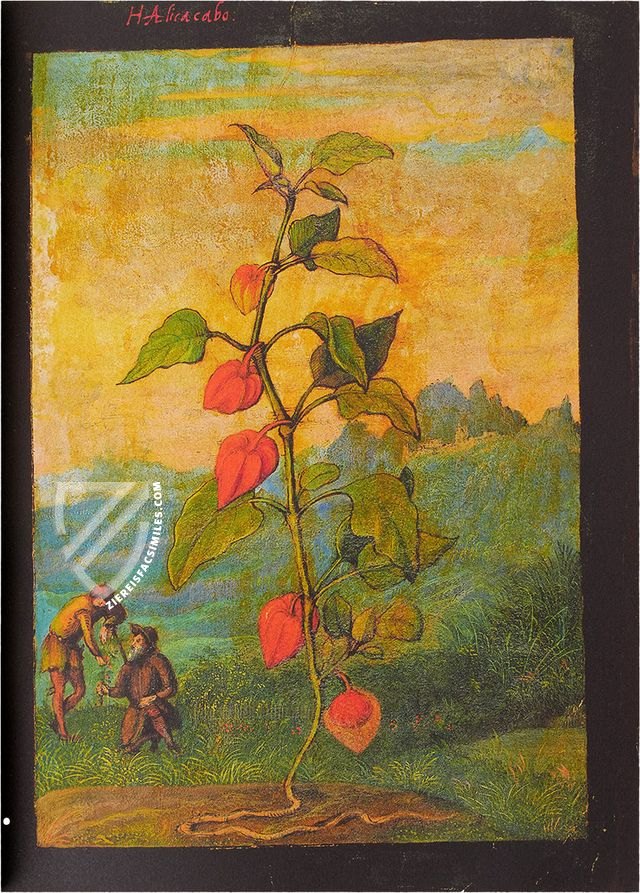 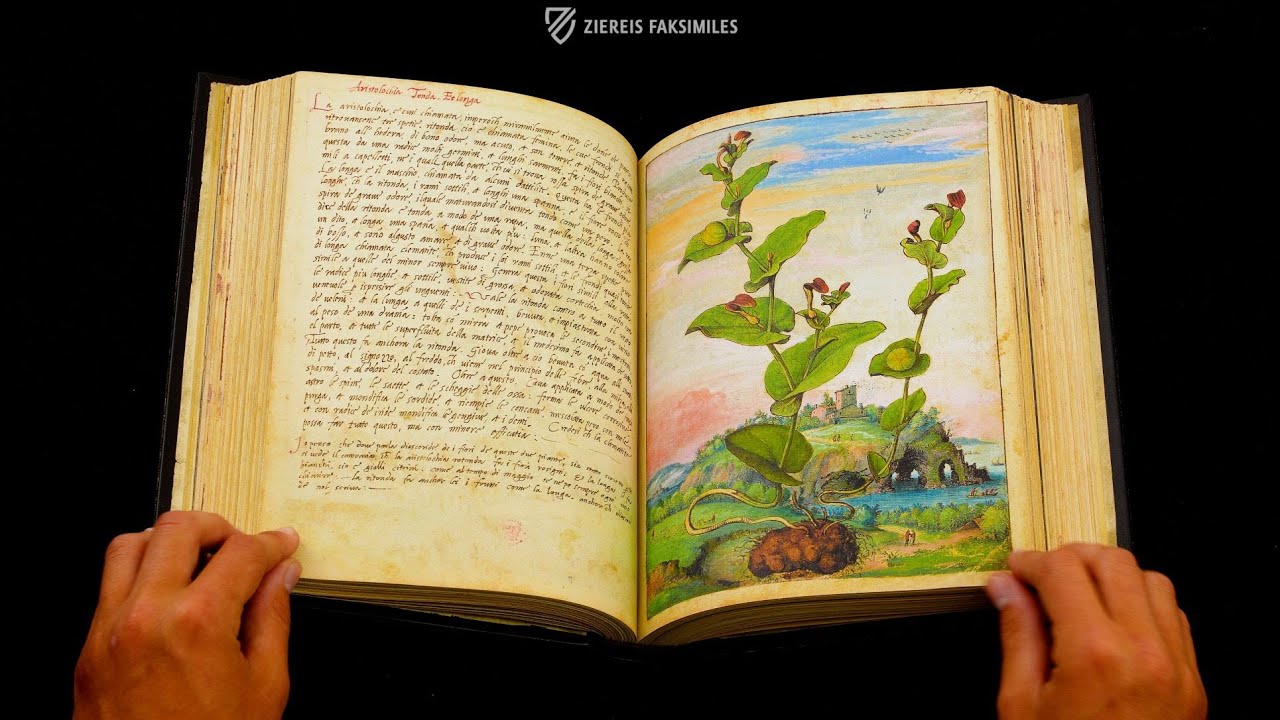 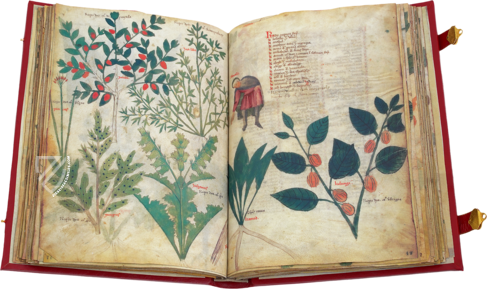 Depictions and information concerning 600 plants: a masterful Dioscorides manuscript in the possession of Pope Alexander VII