The primary work of cosmography of the 16th century: the famous atlas by Gerhard Mercator from the year 1595! The work of the “Ptolemy of his time” is made impressively understandable in this comprehensive cartographic document. The presentation of the world in great overview maps as well as detailed depictions of individual countries and regions conveys the world in the 16th century, the period of trailblazing geographic discoveries. What is more, the Mercator Atlas is unsurpassed in its precision and gorgeous aesthetic!

The primary work of cosmography of the 16th century: the famous atlas by Gerhard Mercator from the year 1595! The work of the “Ptolemy of his time” is made impressively understandable in this comprehensive cartographic document. The presentation of the world in great overview maps as well as detailed depictions of individual countries and regions conveys the world in the 16th century, the period of trailblazing geographic discoveries. What is more, Gerhard Mercator’s famous Atlas is unsurpassed in its precision and gorgeous aesthetic!

The Ptolemy of the 16th century

This historically significant gem is housed to this day in the Princely Fürstenberg Court Library at Donauschingen: a wonderfully colored edition of the famous 1595 Mercator Atlas. This work made its author an unforgettable historical figure: Gerhard Mercator (1512–1594), the famous Renaissance man. He was also known as a cosmographer, theologian, and philosopher, nonetheless he attained his lasting fame as a geographer and cartographer. Many even call him the “Ptolemy of his time”!

A Milestone of Cartography

Mercator’s Atlas sive cosmographicae meditationes de fabrica mundi et fabricati figura was completed and published in 1595. Gerhard’s son Rumold took over the ambitious project after the death of his father shortly before it was completed. Thus, Gerhard Mercator was not able to experience the success of his life’s work, which would soon become the primary work of 16th century cosmography. The Mercator Atlas served rich and important collectors – numerous crowned heads and important historical personalities among them – those interested in cosmography, as well as seafarers as a practical resource.

The Mercator Atlas collects a total of 58 splendidly colored maps, each spanning a double page, on 258 pages measuring 45 x 33 cm. These are not only of the highest geographical precision, but also have lavish artistic décor. Large vignettes and numerous informative inscriptions wonderfully gentrify the brightly designed map. Additionally, four gorgeous title pages can be found in the Atlas, among them is the allegorical figure of the atlas, which holds the globe in its hands. From large overview maps of the world and continents to detailed depictions of individual countries and regions, this milestone of geography is a comprehensive picture of the globe and the abandonment of the medieval worldview! 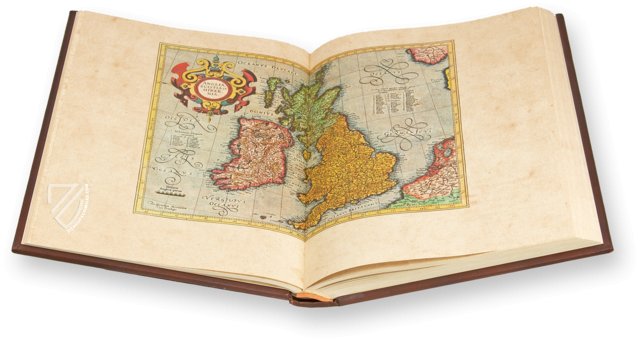 This depiction of the British Isles is one of the finest cartographic specimens from this, the first atlas in world history to be so-called. It is remarkable for its accuracy, depicting the various coastlines, rivers, and other geographic features as they would more-or-less appear in a modern map, e.g. Wales is depicted as being part of England and the Scottish border is essentially the same as today.

The coasts of France, the Netherlands, Denmark, and Norway are also depicted with a high degree of accuracy in this precisely-scaled map. The bodies of water have different names in some cases, e.g. the North Sea is Oceanus Germanicus and the Atlantic Ocean is the Occidentalis Oceanus, while others like the Irish Sea, Hibernicum Mare, are the same.

Coron Verlag – Berlin, 2004
Publisher: Coron Verlag – Berlin, 2004
Binding: The dark brown cow’s leather binding is a true copy of the original.
Commentary: 1 volume (31 pages)
Language: German
1 volume: Exact reproduction of the original document (extent, color and size) Reproduction of the entire original document as detailed as possible (scope, format, colors). The binding may not correspond to the original or current document binding.
Price Category: € (under 1,000€)
Edition available
Price: Login here!
Order / Ask a Question
You might also be interested in: 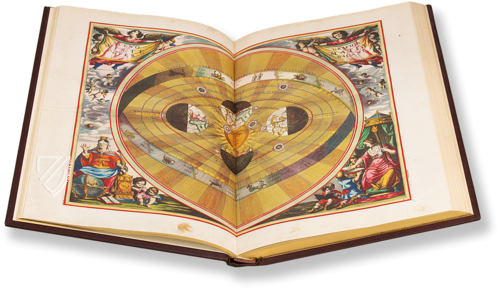 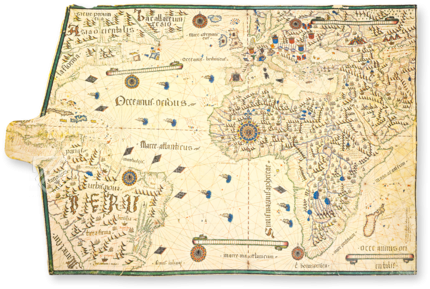