A unique historical treasure is known today under the title Notitia Dignitatum: a Roman state registry from the 5th century containing extremely exciting information about the military and civil organization of the Late Roman Empire. The original is lost today but has been recorded in four medieval transcripts, the oldest and most important of which is stored in Oxford’s Bodleian Library and grants a wonderful inside view into the Roman Empire of late antiquity. The work was commissioned by Pietro Donato and Savoy miniaturist Perronet Lamy served as the illuminator of the manuscript, which he created in 1436. Working in Basel, Switzerland, he furnished it with 109 gorgeous miniatures based on classical examples including detailed depictions of the armaments, clothing, and armor of the army at the end of the 4th century as well as illustrations of stylized cityscapes, tables with shield patterns of the various military units, insignias, and images of ancient coins.

Manuscript Canon. Misc. 378 of Oxford’s Bodleian Library counts among the most precious pieces of evidence of the Late Roman Empire. The historic specimen was made in the year 1436 for Pietro Donato, the Bishop of Padua (1428.1447), who inter alia chaired the Council of Basel in 1436. This manuscript was copied from a now-lost 9th century Carolingian manuscript from the Speyer Cathedral treasury and is considered to be the oldest surviving manuscript of the Notitia Dignitatum.

Pietro Donato presumably contracted the Savoy miniaturist Perronet Lamy as the illuminator of the manuscript. In the last quarter of the 15th century, Perronet Lamy was active for the House of Savoy above all, but also stood in the service of the Bishop of Padua on occasion. It was for him that the transcript at hand of the Notitia Dignitatum, a true gem of illumination and history, was created! In doing so, Perronet Lamy partially copied the example, but also appended it through his own visual inventions and presented all his ability in the wonderful and detailed depictions of the armaments, clothing, and armor of the warriors or a figurative depiction of an enthroned Hadrian in conversation with the philosopher Epictetus standing before him.

How Did the Roman Empire Function

The manuscript of the Notitia Dignitatum presents itself both as an important source for knowledge about the administrative organization of the Late Roman Empire as well as for the rediscovery of Greek antiquity during the Renaissance period. In the notitia dignitatum omnium tam civilium quam militarium, the administrative and military organization of both the Western and Eastern Roman Empires recorded. For example, one finds a register of all civil and military dignities, offices, and troops organized according to the ranks of the hierarchy. The script is gorgeously illustrated with illustrations of stylized cityscapes, tables with shield patterns of the various military units, insignias, and images of ancient coins. 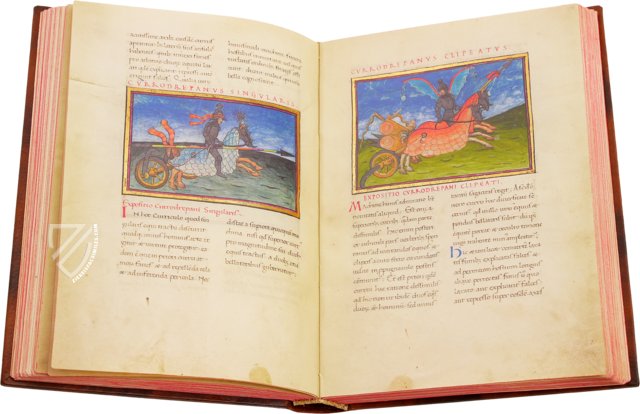 The Debate of Emperor Hadrian and Epictetus

A fictitious dialogue between the Roman Emperor Hadrian and the Greek Stoic philosopher Epictetus was written during the 2nd or 3rd century, which continued to be popular during the Middle Ages. Nonetheless, Hadrian was supposedly friendly with Epictetus and may have heard him speak at his school in Nicopolis. As one of the “Five Good Emperors”, Hadrian was praised by medieval authors for his learnedness and even the staunchly republican Machiavelli described him as an ideal princeps. 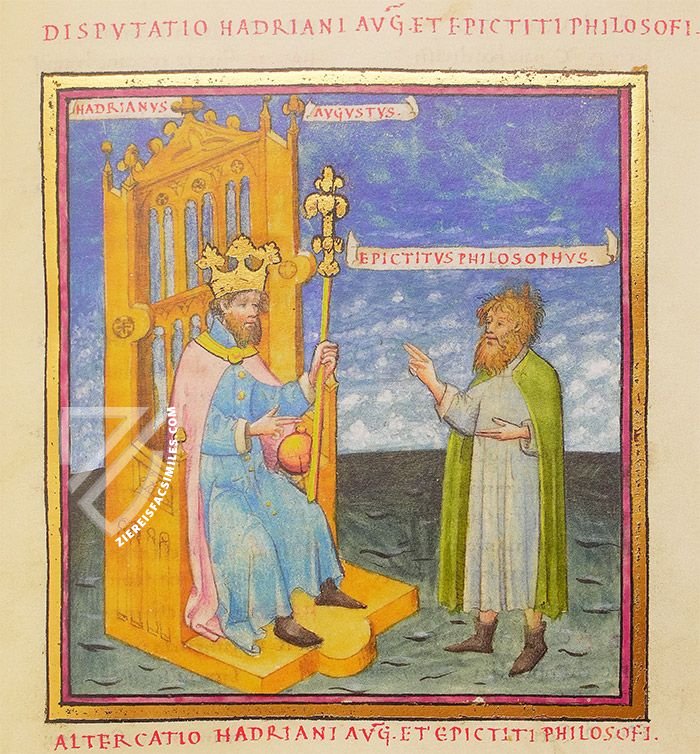 The production of arms, armor, and other equipment was centralized in the 4th century and here we see the helmets, shields, mail coats, cuirasses, laminated greaves, swords, spears, axes, hammers, and other tools that were produced by the fabricae or “arms factories” for the Late Roman Army.

The caption at the top of the page also informs us that these shields have the insignia of the Western units of the Scholae Palatinae, an elite military guard created by Emperor Constantine the Great as a replacement for the Praetorian Guard, which continued to function in the Eastern Roman / Byzantine Empire until the 11th century. They were largely recruited from the Franks and Alemanni, but native Romans also served, especially as officers. 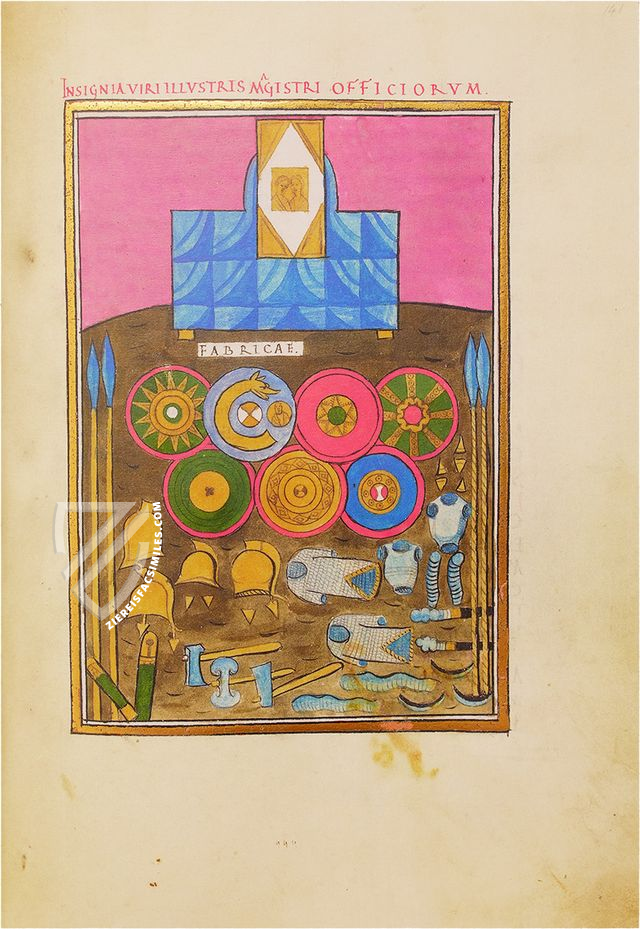 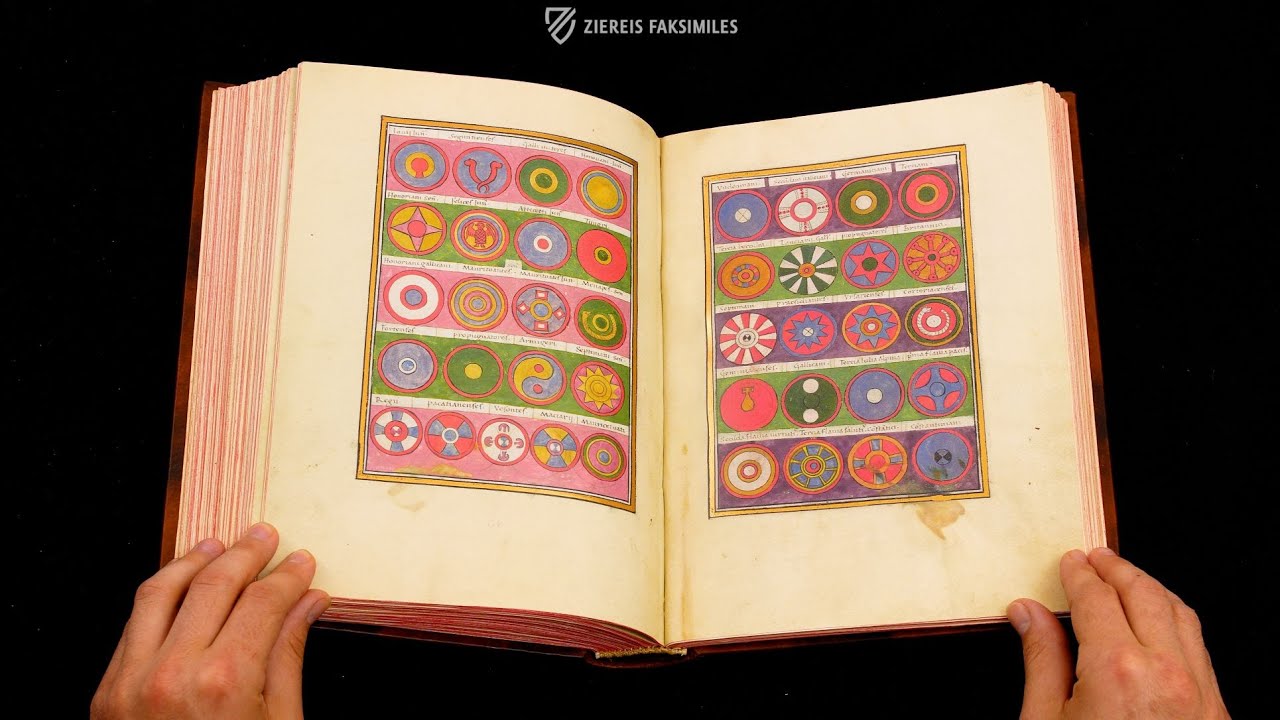 Publisher: Istituto dell'Enciclopedia Italiana - Treccani – Rome, 2014
Limited Edition: 599 copies
Binding: Brown leather binding with gold stamping
Commentary: 1 volume (250 pages) by Luciano Canfora, Jonathan J.G. Alexander and Arnaldo Marcone
Languages: Italian
1 volume: Exact reproduction of the original document (extent, color and size) Reproduction of the entire original document as detailed as possible (scope, format, colors). All folios are cut according to the original. The binding may not correspond to the original or current document binding.
Regular price without login (like new)2,980 €
Log in for a Better Price!
Order / Ask a Question
You might also be interested in: 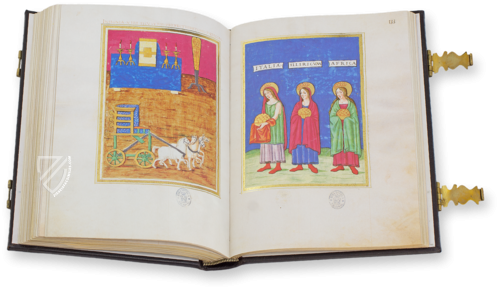