The Passionale Abbatissae Cunegundis (English: Passional of Abbess Kunigunde) was created sometime between 1312 and 1321. It is named after its patron, the Benedictine Abbess Kunigunde of Bohemia, daughter of King Ottokar II of Bohemia. Considered to be a monument of Czech culture today, the manuscript is an anthology of various mystic treatises concerning the Passion, two of which were authored by the Czech Dominican friar Kolda of Koldice. The Prague canon and priest in St. George’s convent Beneš served as the scribe and possible illuminator of the manuscript, which is noteworthy inter alia for containing the oldest surviving depiction of the Bohemian coat of arms in color.

This manuscript containing a set of five spiritual texts from the beginning of the 14th century was created at the initiative of Kunigunde of Bohemia (1265–1321), a member of the Přemyslid dynasty and Princess of Masovia who became Abbess of St. George's Convent at Prague Castle later in life. The first text was written ca. 1312, illumination of the work began the following year, and the manuscript was completed ca. 1321. Consisting of 26 illuminated pages including 5 full-page miniatures, the artistic décor of the manuscript is one of the finest examples of illumination at the time, not only in Central Europe, but is the equal of any contemporary work of book art.
It is believed to be the work of the canon and scribe Beneš, who served as a priest in the St. George's Convent. Created with a bright color palette, the naturalistic figures are dressed in elegant flowing robes and tights while some of the figures are adorned by golden halos and crowns. As a reminder that the theme connecting the five texts of this manuscript masterpiece is the Passion, the Arma Christi are depicted in detail in two of the full-page miniatures.

The illumination of this manuscript is not only important for art historians because of its exceptional quality, but also because it is historically significant. Its dedication picture depicting Abbess Kunigunde on a throne with the coats of arms of Bohemia and the Přemyslids is the earliest surviving colored depiction of the heraldic emblem of Bohemia, which serves today the Lesser coat of arms of the Czech Republic. Furthermore, the manuscript dates from a time when the fortunes of Bohemia and the Czech people were rising.
The Přemyslid dynasty had founded Bohemia as a duchy and transformed it into a kingdom in the previous century, but their male line died out in the early 14th century and the last female heir was married to a member of the House of Luxembourg in 1310. During the 14th and 15th centuries, Bohemia became a center of power in the Holy Roman Empire and Prague evolved into a center of art and culture. For these reasons, the manuscript was declared a National Cultural Monument in 2005 by the Czech government.

The Life of the Patron

Kunigunde was the eldest daughter of Ottokar II of Bohemia (ca. 1233–78) and his second wife, Kunigunda of Slavonia (1245–85), after his first marriage was annulled because he and his wife, who was 26 years his senior, were unable to produce a child. She was initially betrothed to the son of King Rudolf I of Germany, the first Habsburg to sit on the throne, as a political marriage to create peace between the two dynasties, but the engagement was called off after a year and her brother Wenceslaus and her sister Agnes would eventually marry Habsburgs to secure the alliance.
Free to do as she pleased, Kunigunde assumed the habit of the Order of Saint Clare in Prague, where she happily remained for a couple of years until her brother, who was now Kingof Bohemia, ordered her to marry Bolesław II of Masovia (ca. 1253/58–1313). They were married in 1291 and proceeded to have two children but although the resulting alliance worked at first, a dispute over land arose between Kunigunde’s brother and husband. Bolesław withdrew his support for Wenceslaus’ rule and sent Kunigunde back to Prague and they were divorced in 1302.
Once again freed from marital obligations, she returned to religious life at St. George’s, of which she eventually became abbess. It was during her time as abbess that she commissioned the now famous Passionale Abbatissae Cunegundis. 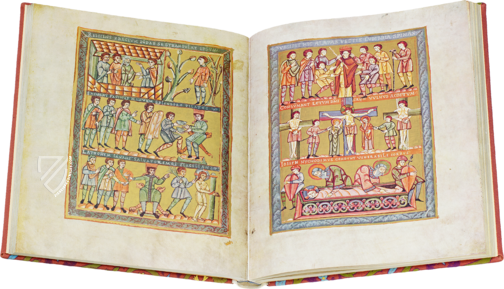 Created by a group of highly talented Regensburg illuminators: a masterfully illuminated Gospel Book celebrating the coronation of Duke Vratislaus II as the first King of Bohemia in 1085 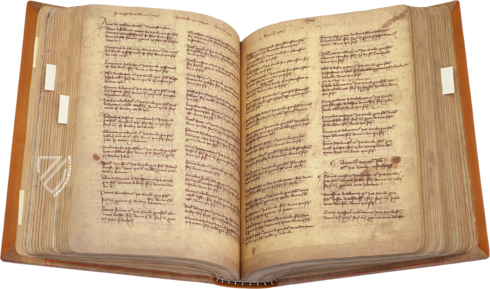 The continuously recorded contemporary history of Prague: the oldest preserved chronicle from Central Europe with the most important events in the dazzling history Prague during the 14th to the 16th centuries