Taqwim as-sihha in Arabic means roughly "Tabular Survey of Health" and became a literary genre of its own in its Latinized form of Tacuinum Sanitatis manuscripts. It begins with the Taqwim as-sihha of the Iraqi physician Ibn Butlan, who produced a compilation c.a. 1050 that included not only foods such as camel meat and melons, but also reviewed the health effects of wind, sleep, and clothing. These tables, originally not illuminated, were translated into Latin at the court of King Manfred of Sicily (r. 1258–1266) and subsequently merged with true illuminated manuscripts, the ancient herbaria, to form a new type of book. In this Tacuinum Sanitatis from Vienna, all 294 individual chapters have images that scenically incorporate their subject (such as harvesting). The division, based on ancient humor theory, still stimulates health today.

The Codex Vindobonensis 2396 is categorized as a Tacuinum Sanitatis manuscript, a book on health arranged in tabular form. This book form goes back to the so-called Taqwin As-Sihha, a medicinal work written by the Arab physician Ibn Butlan who lived and worked in Baghdad during mid–11th century. The Arabic original version was later translated into Latin, probably on the request of King Manfred of Sicily (r. 1258–1266).

Our Tacuinum Sanitatis is the most extensive and neatly arranged collection of recipes for domestic use. Each of its 82 pages displays 4 miniatures which accompany and illustrate the text. In addition to some highly interesting healing methods that are still in use today, the reader will also find extremely amusing passages of text. According on the classical wisdom of Plato and Aristotle, matter was thought to consist of four elements, the equivalent of the states of aggregation we talk about in physics today. These four elements were assigned different qualities: earth, water, air and fire. This theory evolved into the theory of the four humors according to which an illness was assumed to be the result of a disturbance in the fluids of the body, and the curing methods aimed at re-establishing the humoral balance in order to restore health.

As Relevant As Ever

The modern reader will encounter means and methods for leading a healthy life that are still in use today and whose origins in the writings of the old “meysters” have long been forgotten. 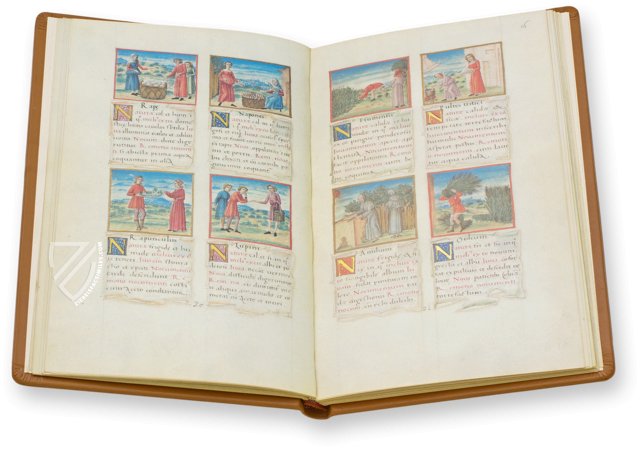 Identified here with the Greek-Latin term Amygdala dulces or “sweet almond”, almond trees originated in the region of modern Iran but are now cultivated around the world. Aside from being an important source of food, the almond also has religious significance. Almonds are mentioned ten times in the Bible: their blossoms served as a model for the menorah that stood in the Temple of Solomon and the mandorla – an almond shaped aureola – often encircles Jesus or the Virgin Mary in Christian art. 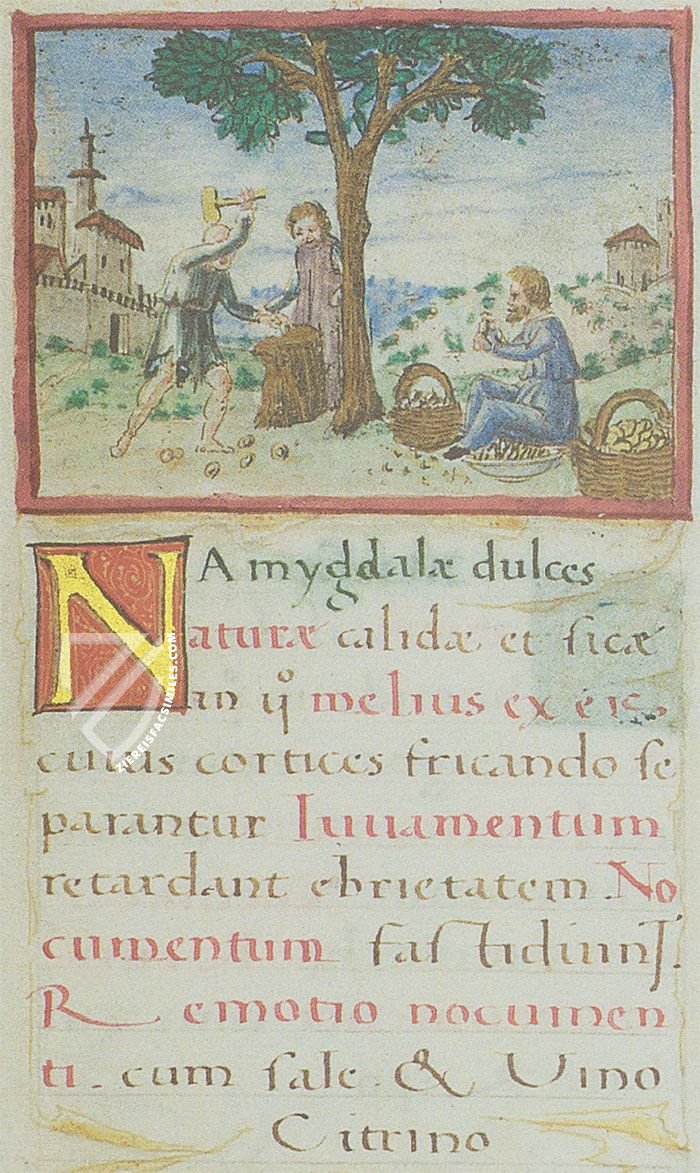 All 294 miniatures of this manuscript are distributed four per page and this folio offers an inside look into the process of illumination. Three of the miniatures are “in progress”: the texts, written in black and red ink, are complete, but the spaces for their decorative initials remains blank. These “naked” miniatures allow us to see the master’s pen strokes before being colored in by an apprentice.

Labelled Melica, the upper-left miniature and accompanying text is the only complete composition on the page and depicts two men harvesting the perennial grass in a well composed and beautifully colored scene. The text is presented as though on a tattered piece of parchment and adorned with a golden initial set against a patterned purple background. 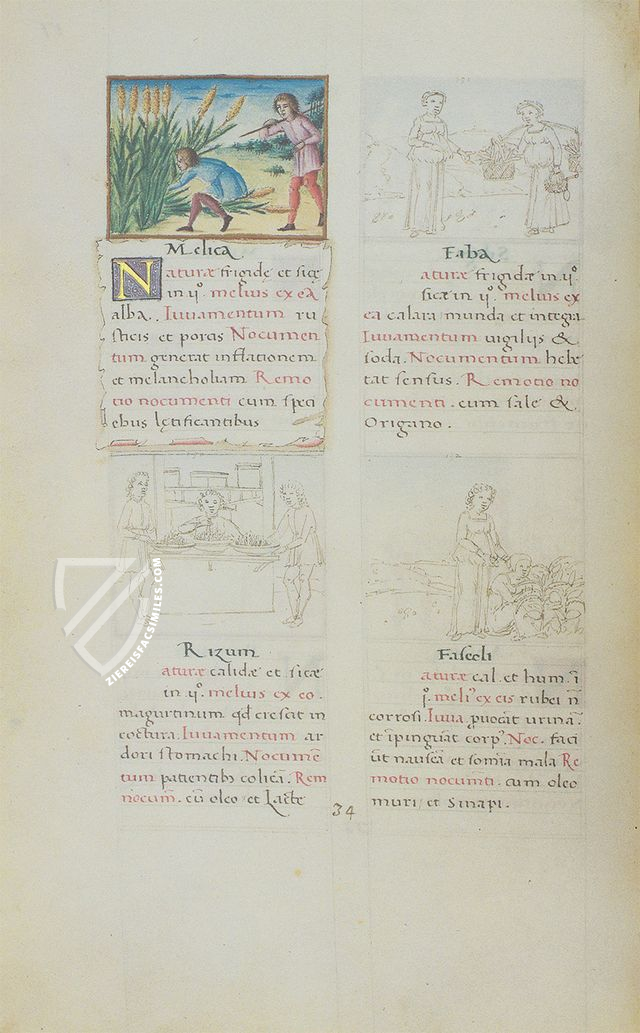 Codicological description by J. Rössl, Vienna. Medicohistorical introduction as well as translation of the text by H. Konrad, Innsbruck. 184 pp.
1 volume: Exact reproduction of the original document (extent, color and size) Reproduction of the entire original document as detailed as possible (scope, format, colors). The binding may not correspond to the original or current document binding. All folios are cut according to the original.
Regular price without login (like new)450 €
Log in for a Better Price!
Order / Ask a Question
You might also be interested in: