This impressive Italian Renaissance manuscript brings the famous tales of the Arthurian sagas back to life: texts concerning the adventures of Lancelot and Tristan and the search for the Holy Grail are assembled here – unique for this tradition in Italy – with gorgeous pen and ink drawings probably illustrated by Bonifacio Bembo. These 289 drawings present a vivid picture of court culture in Northern Italy during the first half of the 15th century and make the manuscript a unique attestation to the Italian Tristan tradition. The text is a tapestry of Arthurian legends combining heroic adventures with stories of lovers. A high-ranking member of the Visconti court in Milan, perhaps Pier Maria Rossi, is believed to be the original patron of the splendid and unique manuscript, which is precisely dated July 20th, 1446. It is a significant art-historical and literary attestation of its epoch!

The manuscript ms. Palatino 556 of the Biblioteca Nazionale Centrale di Firenze is also known as Lancillotto or Tristano Palatino. It probably originated in the circle of the Visconti, the princes of Milan, perhaps at the behest of Pier Maria Rossi (1413–1482), the Duke of Berceto and Corniglio and Marchese of San Secondo, and is dated the 20th of July 1446. The Italian text on 242 pages was presumably written by the copyist Zuliano degli Anzoli.

The Knights Lancelot and Tristan

The content of the text – as the Italian title of the manuscript already indicates – orbits the knights of Arthur’s Roundtable. In doing so, tales from the famous Arthurian sagas are taken up, the adventures of Lancelot and Tristan among them. Countless adventures are interwoven with the stories about the lovers Tristan and Isolde and Lancelot and Guinevere in the heroic medieval epics around the search for the Holy Grail and the Knights of the Roundtable. These tales were widespread during the entire Middle Ages and were continuously appended and modified. Thus, the manuscript offers a vivid witness to North Italian court culture.

Alongside this exceedingly interesting literary content, the other content of the codex is still enchanting: the manuscript is lavishly adorned with 289 pen and ink drawings, which wonderfully illustrate the stories. These make the manuscript a unique attestation to the Italian Tristan tradition and are based on the example of North French miniature painting. The drawings probably originate from Bonifacio Bembo (1420–1480), an Italian painter and miniaturist, who was a court painter for the Sforza in Milan, inter alia. 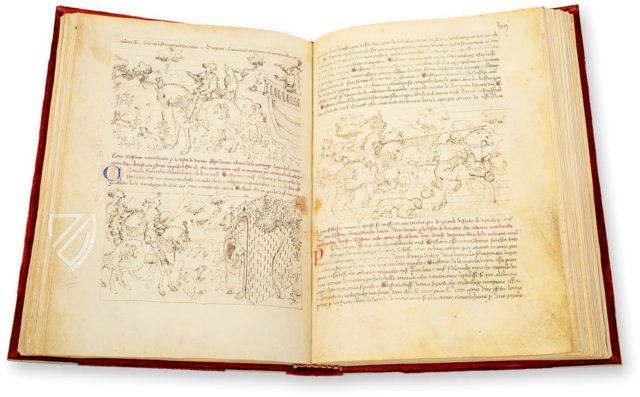 Like any Arthurian romance, this manuscript filled with scenes of knightly combat including this very fine “snapshot” of a knight being struck fatally in the head. Although still gripping his sword, the figure on the right is doubled over under the forceful downstroke of his foe’s longsword, the tip of which is embedded in his helmet. Both are dressed in late medieval plate armor, which would have been extremely difficult to penetrate thusly, which indicates the tremendous strength of Sir Ywain. 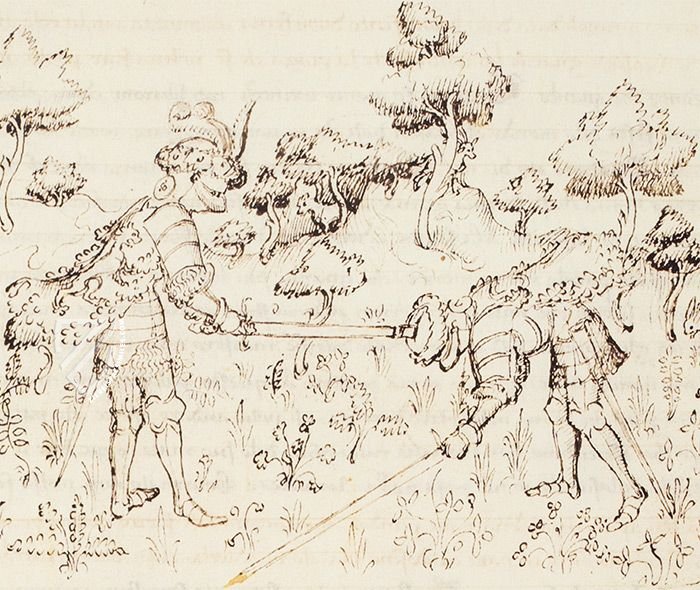 Lancelot would not have survived the death of his father, King Ban of Benwick (Italian: Bando di Benoic), by a hair's breadth were it not for mythical Lady of the Lake (Dona del Lago), who raised him with her retinue in her fairy kingdom. She took great delight in his development and character, eventually becoming one of the boldest and most famous knights of King Arthur's Round Table.

However, as the Lady of the Lake became more and more aware of his unusual strength, his spiritual gifts, and his courage, she frankly admitted to herself, in the version presented here, that a further stay of Lancelot in her realm could only be a waste of his abilities. She therefore sent him, accompanied by some of her ladies, to King Arthur's Round Table. On the way there, they encountered three heavily armed knights, which is congenially depicted here. When Lancelot, who had been brought up in the fairy kingdom and was not yet dressed like a knight, sees knights for the first time in his life and immediately knows how to use their weapons, the knights also recognize the 15-year-old's talents and send him to King Arthur full of admiration. 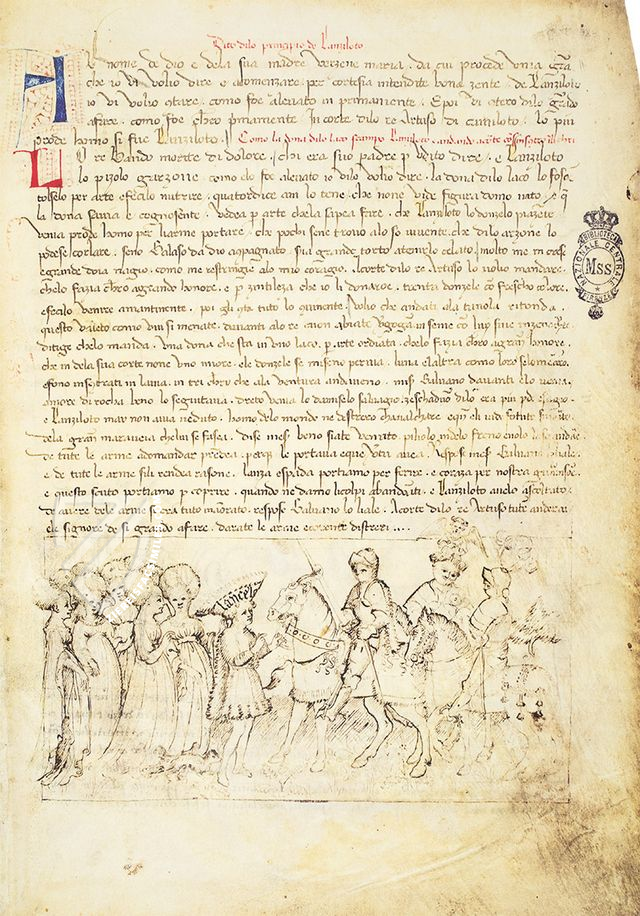 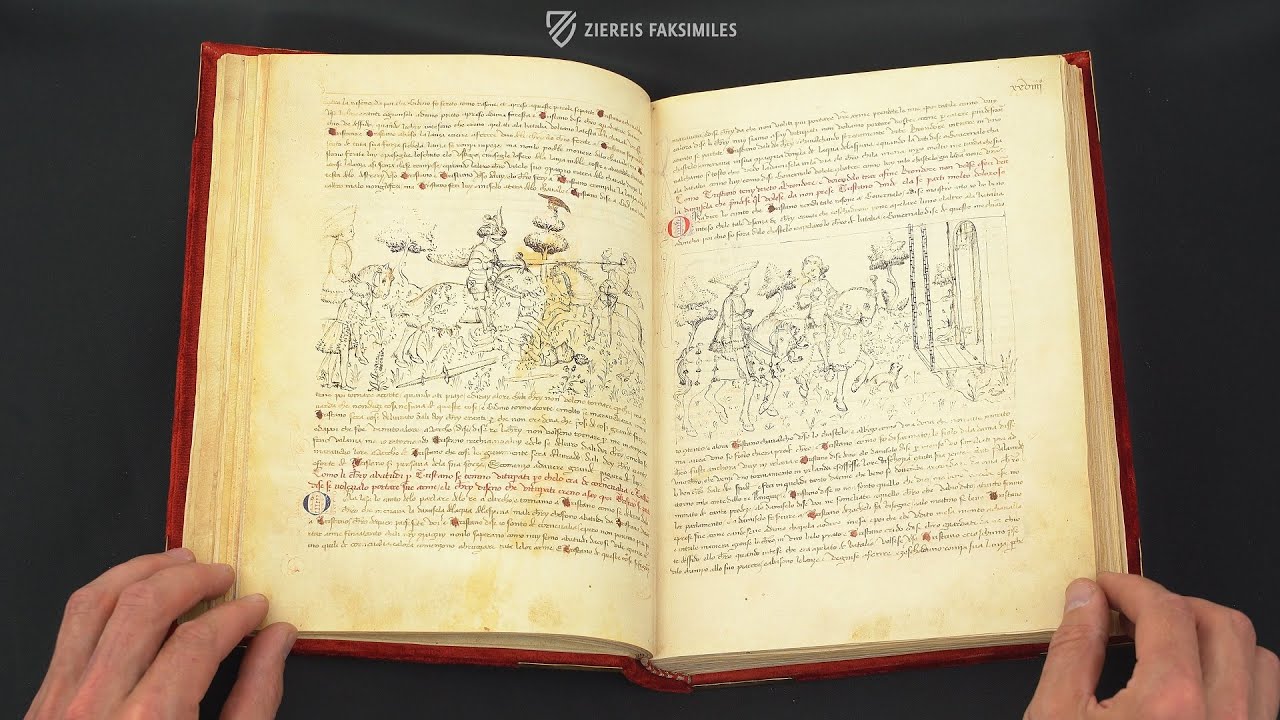 Publisher: Istituto dell'Enciclopedia Italiana - Treccani – Rome, 2009
Limited Edition: 750 copies
Binding: Red velvet
Commentary: 1 volume (352 pages) by Daniela Delcorno Branca, Marzia Faietti, Annette Hoffmann, Piera Giovanna Tordella, Adriana Di Domenico and Roberto Cardini
Language: Italian
1 volume: Exact reproduction of the original document (extent, color and size) Reproduction of the entire original document as detailed as possible (scope, format, colors). All folios are cut according to the original. The binding may not correspond to the original or current document binding.
Regular price without login (like new)2,980 €
Log in for a Better Price!
Order / Ask a Question
You might also be interested in: 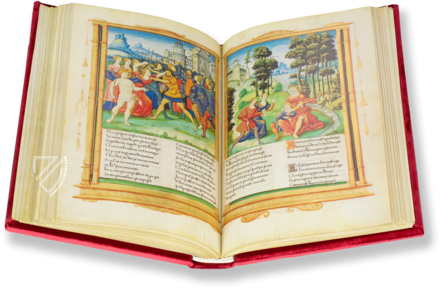 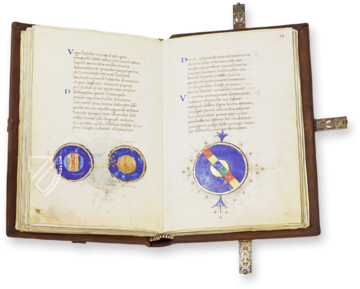 Two masterpieces of medieval book and map art: the "Flowers of Virtue" and Waldseemüller's famous world map, the first with the designation "America"