The Crusades were one of the defining events of the Middle Ages and had far-reaching ramifications for both Christendom and the Islamic world. The most comprehensive, albeit somewhat mythicized, source on the Crusades was written by Sébastien Mamerot at the behest of the noble French bibliophile Louis de Laval. Furthermore, the manuscript was illuminated by no less than Jean Colombe, one of the greatest artists of the French Renaissance.

Sébastien Mamerot (ca. 1418–90) was the author of the largest medieval work written on the Crusades: Les Passages faiz oultre mer par les François contre les Turcqs et autres Sarrazins et Mores oultre marins, which translates to “Overseas Expeditions made by the French against the Turks and Saracens and Moors” in English. It consists of nearly six hundred pages of text written in two wide columns. The owner, Louis de Laval (ca. 1411–89), commissioned the French master Jean Colombe (ca. 1430 – ca. 1493) to illuminate the text with 145 miniatures, including some of the most iconic imagery of medieval manuscript art, e.g. the scene of the Council of Clermont on folio 19r. The result is a monumental work that is distinguished both for its textual content and the artistic refinement of its décor. A portrait of Laval appears on the first page, depicting the French nobleman and general as a thin, elderly man who is being presented the manuscript by a kneeling Mamerot. The dedication is precisely dated to Thursday, January 12th, 1473. 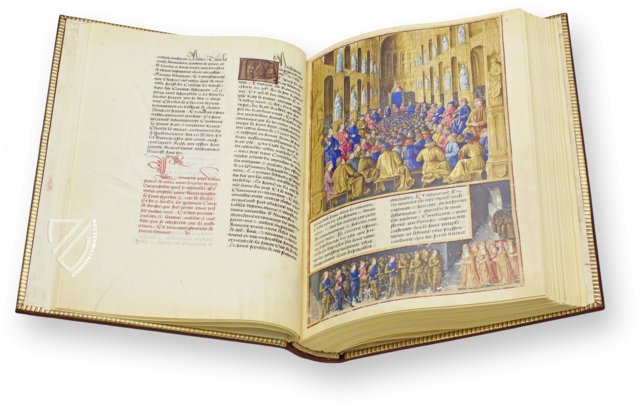 The Siege of Antioch

Antioch was one of the most important cities in the Holy Land, it occupied a strategic position and was well defended by Byzantine walls with over 400 towers, making it a difficult target. The city endured 8 months of siege before falling on June 2nd, 1098 after two armies sent to relieve the city were defeated and routed in succession. Here we see the impressive fortifications of the city and the massive army of Crusaders attacking it with scaling ladders. 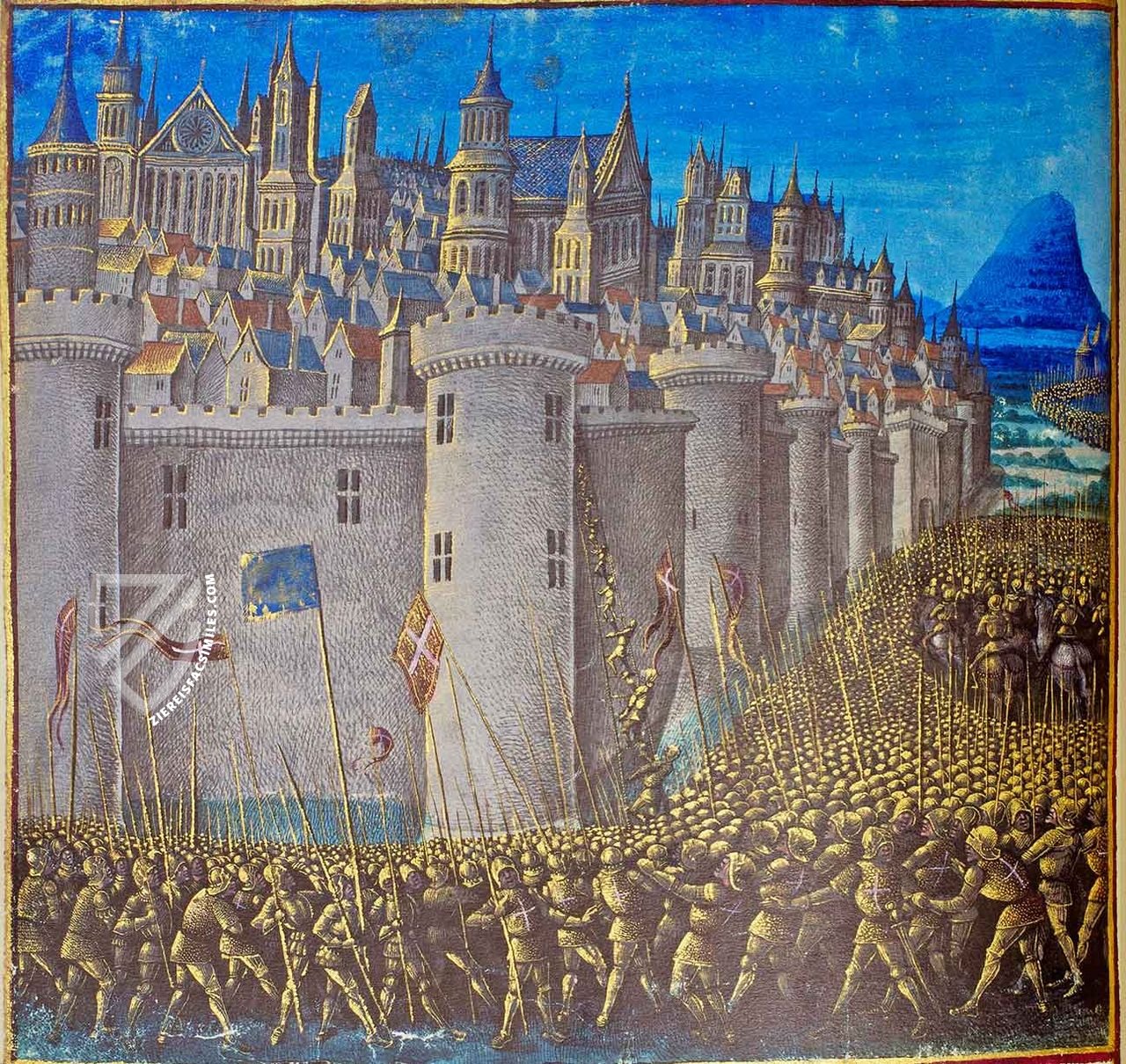 The Council of Claremont

This important speech, given on November 27th, 1095, is depicted within a gorgeous Gothic interior filled with a sea of faces. A masterful use of perspective focuses the beholder’s attention on the distant figure of Urban in this famous miniature that sparkles with gold brush strokes. The Frankish knights to whom Urban’s message is directed are depicted in contemporary armor in the bas-de-page miniature. 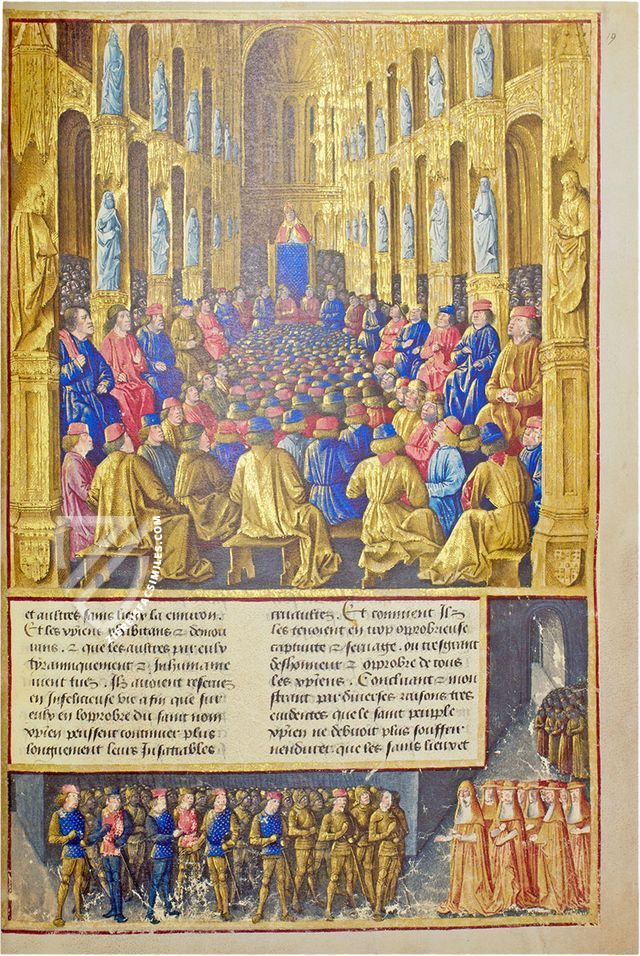 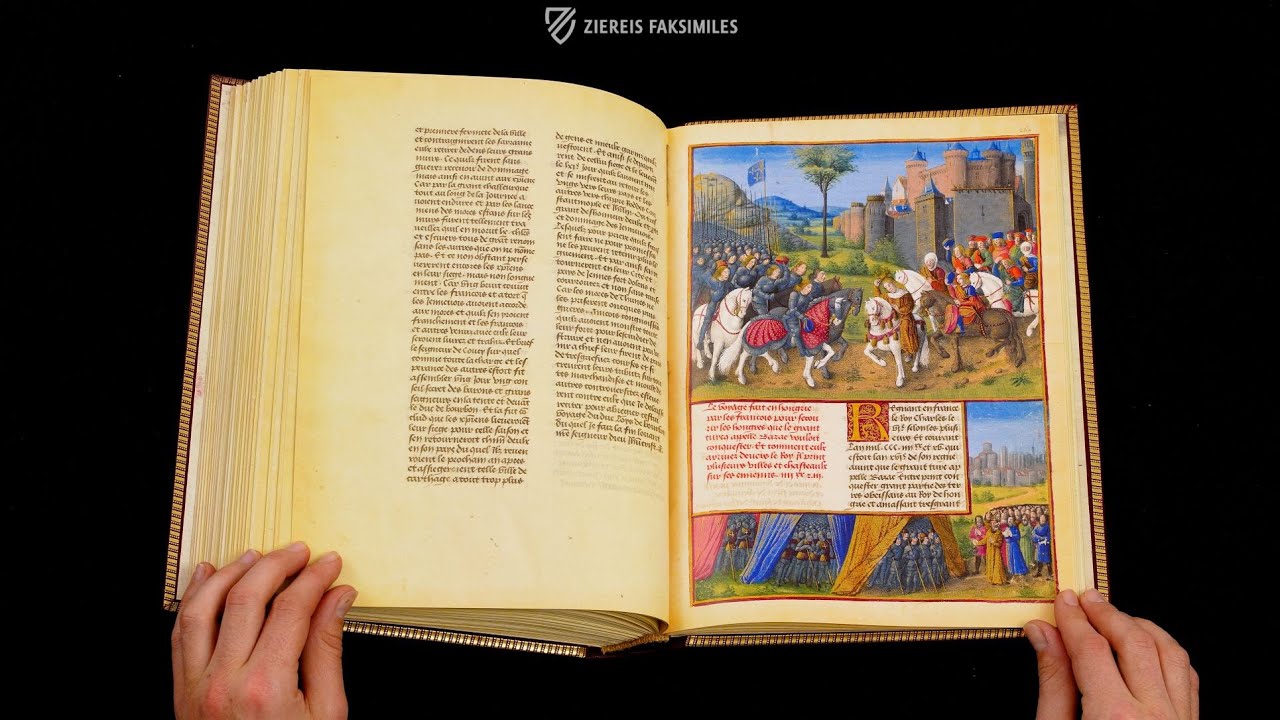