Founded in 1352 on Pentecost, the Ordre du Nœud or “Order of the Knot” was a chivalric order established by King Louis I of Naples (1320-62) to commemorate his royal coronation. Gorgeously colored and adorned with gold leaf, 17 miniatures illustrate the manuscript containing the order rules with images of important ceremonies and acts of bravery. The Statutes of the Ordre du Nœud is a wonderful Gothic manuscript that was later owned by King Henry III of France (1551-89).

Chivalric orders were all the rage in the Late Middle Ages and various dynasties created their own orders, some of which still exist today like the Order of the Garter, founded in 1348 by King Edward III of England (1312-77). Doubtless inspired by this and other chivalric orders, King Louis I of Naples (1320-62), created the Ordre du Nœud or “Order of the Knot” in 1352. Although the order itself was not long lived, the manuscript containing the Statutes of the Ordre du Nœud has endured as a masterfully illuminated witness to the rituals and heroic deeds associated with any knightly order. 17 colorful miniatures with gold leaf reminiscent of Giotto (ca. 1267-1337), including a full-page Crucifixion scene, adorn the text along with gorgeous floral tendril borders filled with vases, animals, and birds.

On Pentecost in the year 1352, Louis of Taranto was crowned King Louis I of Naples alongside his wife, Queen Joanna I (1325-82). To mark the occasion, he founded a chivalrous order – the Ordre du Nœud. Founding a chivalric order served to legitimize the King as a Christian ruler and defender of the Church, provide a core of 300 elite knights for his armies, and create a trusted group of advisors. The members of the order were chosen and dubbed solely by the King, who also served as the Order Master, and wore white habits to symbolize the faith and honor of the knights, who were also expected to fast on Fridays. A knot of purple and gold-red silk threads, which was fastened to the knight's chest or arm after the oath of allegiance, was their only decoration.

According to the Statutes, certain acts of bravery could allow a knight to untie their knot. The untied knot was taken by the knight as a pilgrim to Jerusalem and placed at the Holy Sepulcher with the inscription of his name in a prominent place. Only then could the knot be tied again, with a tongue of fire on it, crowned with the knight's name under the new motto: a pleut à Dieu or “God has willed it”. However, this custom and other chivalric traditions were never fully realized because the order did not last long after the death of its founder in 1362. The Statutes of the Ordre du Nœud has nonetheless survived as a beautifully illuminated testimonial to chivalric orders in the Late Middle Ages. Scenes depicting various rituals and ceremonies offer a precious glimpse the inner workings of this order, which may be why the manuscript was once owned by King Henry III of France (1551-89).

Cristoforo Orimina was a 14th century Italian illuminator active at the royal court of Naples and was descended from a patrician Neapolitan family. Regarded as one of the great masters of the Trecento, the miniatures Orimina created for this manuscript are strongly reminiscent of the great Giotto. Furthermore, Orimina reinterprets Giotto according to the stylistic features of Pietro Cavallini (1259 – 1330), giving shape to a sumptuous and elegant visual language. From the plasticity of the figures to the spatiality of the scenes containing them, this is a unique and intact specimen that is exemplary of the art of medieval miniatures. 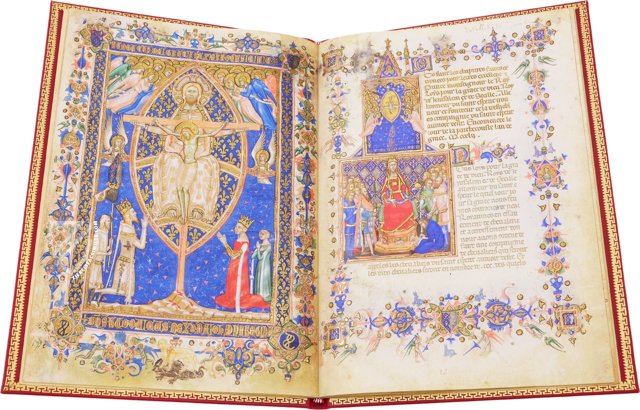 Investiture of Three New Members of the Order of the Knot

All military religious orders had their own initiation ceremonies including various rites, rituals, and regalia e.g., the figures depicted here have pieces of cloth attached to their upper arms and wear golden knots on the breasts of their tunics semy. These three initiates stand before the King and his sword-bearer fully-armed; the King personally girds them with their new swords, which bear the Order’s symbol – a dove wreathed in rays of light, which is depicted in the small pointed Gothic dome above the King. 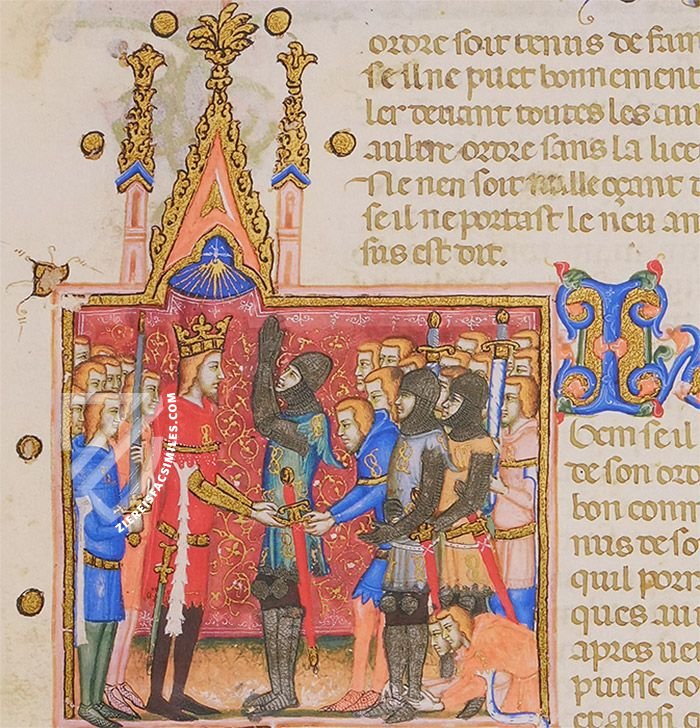 The Royal Family before the Throne of Mercy

The creation of the Order of the Knot coincided with the coronation of Prince Louis of Taranto and Joanna of Naples as the King and Queen of Naples. Two Latin inscriptions appear in the blue and gold fleur-de-lys patterned frame: top – “Louis, by the Grace of God, King of Jerusalem and Sicily”, bottom – “Lord Louis, King, Lady Johanna, Queen”. The King’s French motto is carried by two angels with banderoles: “if God wills it”.

Louis kneels on the left accompanied by a squire carrying a crowned helmet with wings, one with fleurs-de-lys, as well as a golden knot. Joanna, who ruled in her own right before their marriage and after her husband’s death, kneels on the right with their daughter Françoise, who tragically died on their coronation day. They are all at the feet of a magnificent Throne of Mercy: inside a mandorla and surrounded by a host of angels, God the Father holds the crucified Christ with the Holy Spirit represented by a dove connecting them. 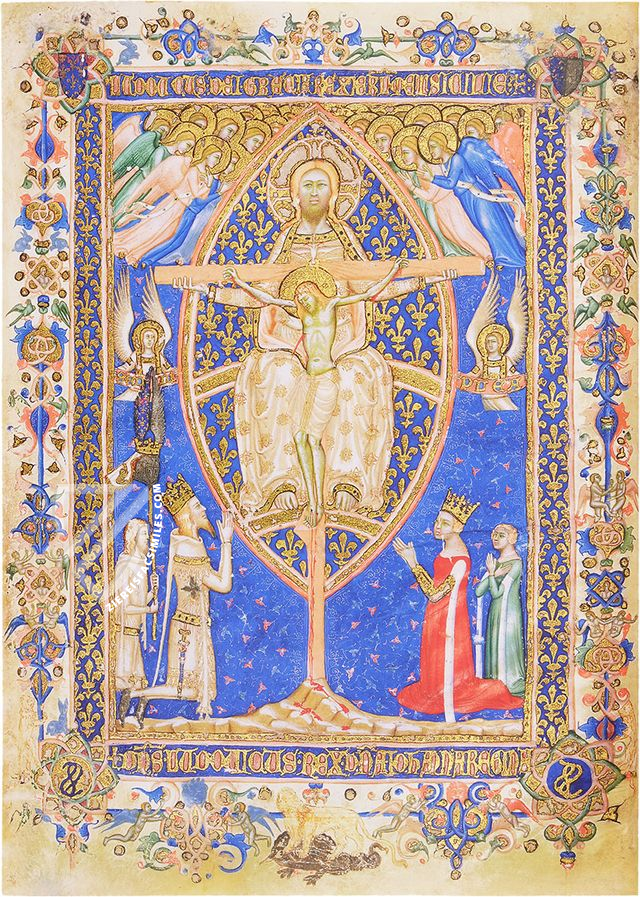 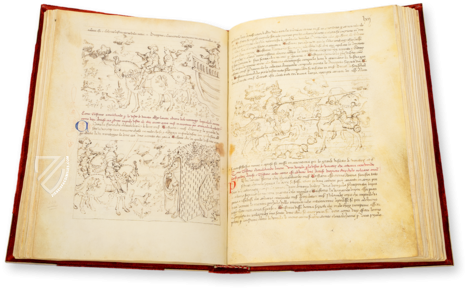 The legends of King Arthur in the context of the Renaissance: 289 fascinating pen drawings created at the court of the Visconti