The Treves Apocalypse can boast several superlatives: it is the oldest surviving illustrated version of the Revelation of John, it contains the most extensive cycle of images of the last book of the Bible, and serves a unique function as a bridge to the art of Late Antiquity, from which hardly any testimonies have survived directly. Therein lies its inestimable iconographic significance: some of the figures in the 74 full-page miniatures are strikingly reminiscent of pagan antique models. Thus, the goat-headed figure of Satan (fol. 66 and 67) is reminiscent of the pagan god Pan, and similarly an angel (fol. 19v) parallels Nike, the winged ancient goddess of victory. This suggests that the cycle goes back to a sequence of images from Late Antiquity. The text of an Italian Vulgate version, also very early, was revised in the late-11th century.

The Treves Apocalypse, so-called after its present place of conservation, not only represents the first illustrated version of the Revelation of St. John that we know of, but also features the most comprehensive illustrated cycle of this biblical book that survives from the Early Middle Ages. What makes the Treves Apocalypse (Greek for revelation) so special, is its unique painted decoration which is unparalleled in contemporary Carolingian illumination. Its 74 full-page miniatures in red frames each illustrate a sequence of text from this last book of the New Testament, which has been ascribed to an unknown St. John. The enormous iconographic value of the codex is due to the fact that it is clearly marked by Paleochristian, presumably Roman origins. This makes the Treves Apocalypse one of the few testimonies reflecting late classical artistic creativity, a source to be tapped later by many medieval artists.

The miniatures of the Treves Apocalypse are colored pen drawings, many of them covering a full page. They are all regularly inserted into the text, each illustrating the preceding section, with the exception of the first one (fol. 1v). The illumination cycle of the Treves Apocalypse is a pure illustration of the text in narrative form and offers no interpretation of the text whatsoever. No reference has so far been found to late classical or early medieval commentaries of the Apocalypse nor to other theological or liturgical scriptures.

Many of the illustrations show stunningly obvious parallels to classical motifs. One of them is the goat-headed figure of Satan (fol. 66r and 67r) which goes back to the Greek idea of a deity called Pan, represented with the head of a goat. However, this depiction of Satan in the Treves Apocalypse was made at a time when the antique image of Pan was no longer known and the relation between the Greek goat god and the Christian Satan had fallen into oblivion. What remained in collective memory was Satan’s representation as a goat-like figure. The illustration cycle of the Treves Apocalypse contains numerous other motifs of antique origin, such as the angel on fol. 19v who so stunningly resembles the figures of Nike, the antique goddess of victory. These obvious parallels lead us to assume that the cycle of the Treves Apocalypse goes back to a late antique sequence of images.

The Latin text of the Treves Apocalypse follows an early Italian Vulgate and is written in a easily legible Carolingian minuscule script with an amazingly large portion in half-uncial. The text was erased and corrected in many places by a later hand, at the end of the 11th century. Among the books of the New Testament, the significance of the Revelation used to always to be a matter of controversy. Up until the 5th century, the Churches of Syria, Cappadocia and Palestine had not accepted the book as part of the canonical scriptures whereas the Western Church regarded it as an Apostolic Scripture. From the early Paleochristian era, this visionary work was decorated with illustrations, but none of these early illustrated codices survived. 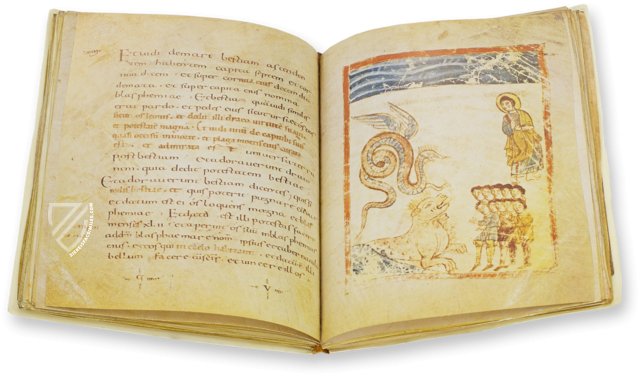 John's Message to the Seven Communities of Asia Minor

All located in western Anatolia, the churches of Ephesus, Smyrna, Pergamum, Thyatira, Sardis, Philadelphia, and Laodicea were the largest and most important in the East and it is specifically to these churches that the Book of Revelation is addressed. The so-called Seven Churches of Asia are addressed individually by John throughout Revelation 2 and 3, receiving both encouragement and admonishment. They are represented here with a blend of classical and Carolingian architecture. 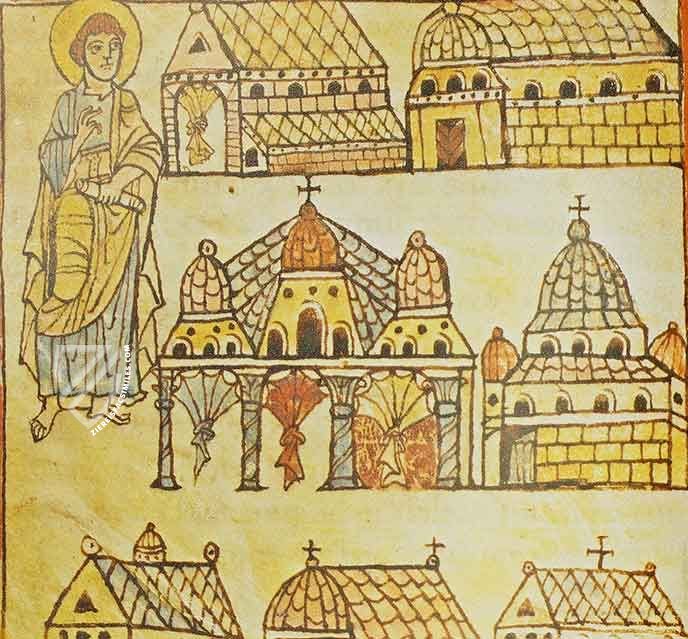 Vision on Patmos / Son of Man

I, John, both your brother and companion in the tribulation and kingdom and patience of Jesus Christ, was on the island that is called Patmos for the word of God and for the testimony of Jesus Christ. I was in the Spirit on the Lord’s Day, and I heard behind me a loud voice, as of a trumpet, saying, “I am the Alpha and the Omega, the First and the Last,” and, “What you see, write in a book and send it to the seven churches which are in Asia...” (Rev. 1:9–11)

This miniature portrays the moment of John’s inspiration when he received a vision, which would become the Book of Revelation, from Jesus Christ as the “son of man”. Like the rest of the manuscript, this masterful miniature is clearly based on classical forms and mixes Christian and pagan symbolism. 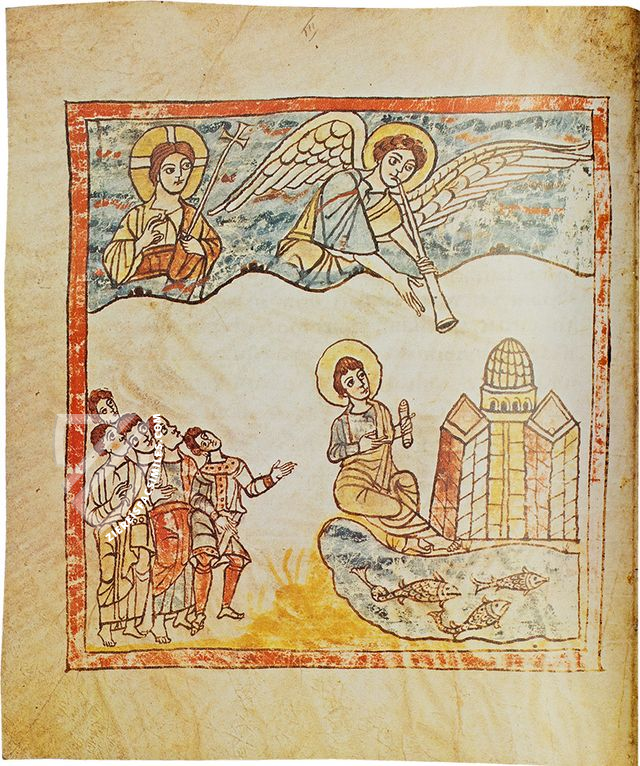 The extensive expert commentary describes the manuscript and its significance for the history of art. Richard Laufner covers the codicological aspect, while Peter K. Klein writes on the time and place of its making and on the illustration of the codex.

The extensive expert commentary describes the manuscript and its significance for the history of art. Richard Laufner covers the codicological aspect, while Peter K. Klein writes on the time and place of its making and on the illustration of the codex.

Codicological and palaeographical description by R. Laufner, Trier. Art historical description by P. K. Klein, Bonn. 163 pp. text, 94 illustrations on 52 plates.
1 volume: Exact reproduction of the original document (extent, color and size) All folios are cut according to the original.
Copy available – Ask for a quote!
Order / Ask a Question
You might also be interested in: