The Iberian Peninsula lead Europe in exploring the rest of the world and as such it also produced some of the finest cartography from the 15th and 16th centuries. The Atlas of Lázaro Luis is a Portuguese work from 1563 that enjoyed great popularity during the 16th century and is an accurate reflection of the world as it was then known to European cartographers. The maps are populated by depictions of the local peoples in their indigenous dress and include other details such as the local flora, the course of rivers, mountain ranges, villages, cities, and the heraldry of lands across the world. A beautiful star chart precedes the rest of the work and a full-page portrait of the Madonna and Child brings it to a close.

One of the most important works of 16th century cartography and a codex of extraordinary beauty: the 1563 Atlas of Lazaro Luis. In it, the author shows himself to be a man of his time: well-educated, curious, meticulous, and endowed with a broad understanding of culture. Luis signed the last page of the manuscript, which features a full-page portrait of the Madonna and Child, with his name and an inscription in Portuguese. Due to the detail with which he depicted the coasts of South Asia, it has been theorized that he was born in India. Regardless of where he was born, the nautical charts, drawings and phrases all point to a highly cultured and erudite personality.

A Large and Lavish Atlas

The atlas consists of ten sheets of parchment measuring 61.3 x 43.2 cm and 19 of the 20 pages in the manuscript are lavishly furnished with colorful drawings and generously applied gold leaf making every turn of the page a new feast for the eyes. It is organized thusly: sheets 1 and 2 are concerned with cosmographic content like using the stars for navigation and nautical rules, sheets 3r-9r consist of maps, 9v contains texts and numerical tables referring to the movable feasts during the year including the “golden ratio”, and 10v contains a large drawing with a legend at the bottom containing the date it was designed. The meticulous illustrations bringing the maps to life include a caravan crossing the Sahara and resting in an oasis, the vegetation of the Amazon jungle, indigenous villages in the Americas, fortresses, large cities such as Alexandria, holy places including Jerusalem and Mecca, and heraldic elements like flags and crowns that appear over their respective territories. 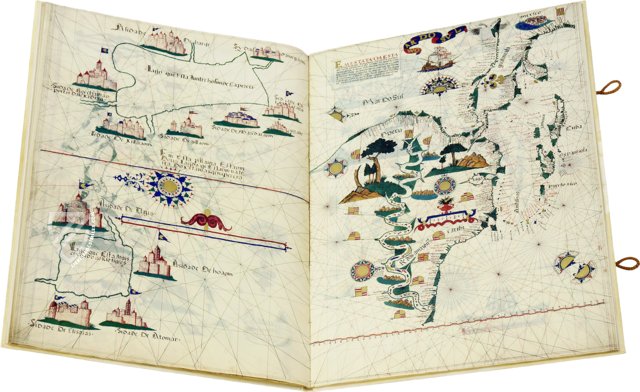 The vast interior of Africa serves as a space for a miniature in two registers. In the upper register, Bedouin merchants are depicted leading their camels packed with goods through a cave amidst a green landscape, which probably represents the mountains separating the Sahara Desert from the fertile coasts of the Mediterranean. Below, a lion stands guard holding a banner on top of a hill in front of a palace surrounded by trees in one of the rich, gold-producing kingdoms of West Africa. 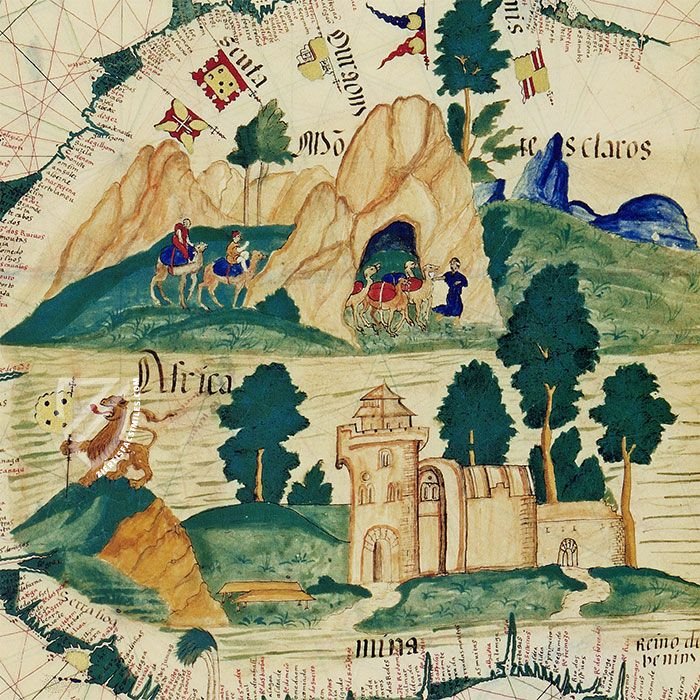 From Mexico in the North to Brazil in the South, this map presents the colonial empires of Spain and Portugal in the Americas. Cuba, Hispaniola, Puerto Rico, and Jamaica are clearly identified with smaller Caribbean islands labelled in red ink. The mighty Amazon River is shown winding its way past trees, rocks, settlements, and flags on its way to the ocean.

Looking northward, a ship with red crosses painted on its sails approaches the Pacific coast of Central America, labelled as Guatemala. Mexico City is depicted amidst Lake Texcoco, where it was built on the ruins of the old Aztec capital of Tenochtitlan by order of Hernan Cortés. Recognizing the cultural value of the site, he even reused the stones from the temples and palaces of the Aztecs. 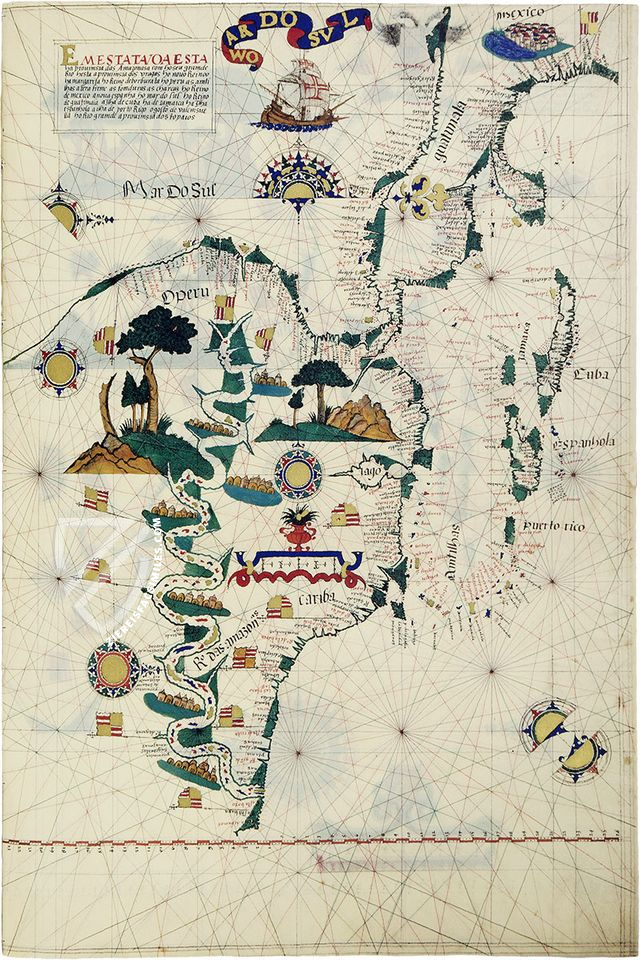 Xuntanza Editorial – A Coruña
Publisher: Xuntanza Editorial – A Coruña
Limited Edition: 999 copies
Binding: Completely handmade binding from parchment and hemp string
Commentary: 1 volume
Languages: Portuguese, Spanish
1 volume: Exact reproduction of the original document (extent, color and size) Reproduction of the entire original document as detailed as possible (scope, format, colors). The binding may not correspond to the original or current document binding. 20 parchment pages of the facsimile edition are illuminated with gold on both sides.
Price Category: €€ (1,000€ - 3,000€)
Edition available
Price: Log in here!
Order / Ask a Question
You might also be interested in: 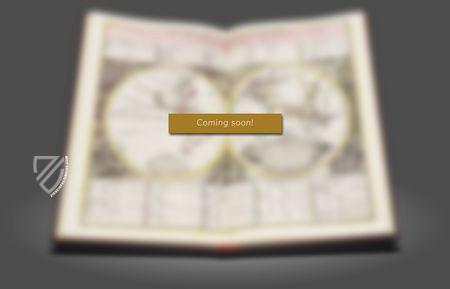 From arguably the most gifted Renaissance cartographer: a major work of modern geography and a masterpiece of illumination 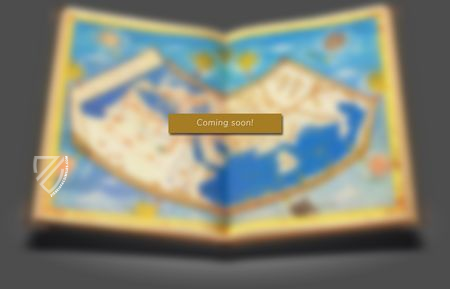 Unifying the most important cartography schools of the 16th century: 19 maps, including two world maps, by the court cartographer of King Philip II