The Codex Germanicus is one of the most important witnesses to European bookmaking in the late 15th and early 16th centuries, when new printing techniques were incorporated into the art of manuscript production, which was then in its last and arguably most magnificent period. It is a manuscript copy of a printed book that was supposedly commissioned by the Emperor Maximilian I, but the exact circumstances of its creation remain unclear. Seven full-page woodcuts by Hans Weiditz the Younger and numerous engraved frames adorn the German prayerbook, which originated from a masterful scribe. The ownership history of the book is also intertwined with the tumultuous history of Hungary between the 16th and 18th centuries.

At the end of the 15th and beginning of the 16th centuries, European manuscript production was experiencing its last and most brilliant flowering at the same time that book printing was spreading across the continent. Nonetheless, the upper nobility continued to favor handmade codices using parchment over printed books with inexpensive paper. While there was obviously a rivalry between the two methods, there was also overlap and borrowing between them. One of the most beautiful examples of this is a manuscript stored today in the Budapest University Library under the shelf mark Codex Germanicus 3.

The Codex Germanicus is an early 16th century German manuscript that is a transcription of a contemporary printed prayerbook known under the short title Gilgengart, of which two editions were published on rough parchment in Augsburg by Johann Schönsperger the Elder (1455–1521) in 1520 and 1521. He had been appointed court printer to Emperor Maximilian I (1459–1519) in 1508 and although there is no direct link to the Emperor, there are numerous indicators both in the script used and the circumstances of the print that it was originally an imperial commission, but was not finished during Maximilian’s lifetime. This would by no means be the only printed book commissioned by Maximilian whose final publication was delayed by financial restrictions, even if the letters and woodcuts were already finished.

Maximilian had previously commissioned the copying of printed books by hand, and the fact that the text of the manuscript was adopted for a female audience indicates that it may have originated as a wedding gift for his granddaughter Mary of Austria (1505–58), who married King Louis II of Hungary (1506 –26) in 1515. After the death of her husband in the Battle of Mohács in 1526, Mary fled to Preßburg, modern Bratislava, Slovakia where she stayed for several months and deposited some of her treasures and books in the local church library. After the library was dissolved by Emperor Joseph II (1741–90), the manuscript was acquired in 1782 by Michael Winkler, who was a priest in Bonyhád, Hungary. This explains how the manuscript first came to Hungary in the early 16th century and returned there in the late 18th century.

The masterfully written Fraktur text adorned by golden initials appears to be based on the 1520 print but is not an exact copy despite being written in the same dialect: there are small deviations in formatting, spelling, and male forms are replaced by female ones (e.g. “ich arme Sünderin” instead of “ich armer Sünder”). In contrast to the texts of other German prayerbooks that developed since the 14th century, the Gilgengart text differs in both form and content. It contains 47 independent texts assembled from various sources, 19 of which are devoted to the Virgin Mary, but lacks a calendar and some other typical elements. Overall, the texts share four themes in common: penance, the acquisition and accumulation of indulgences, and devotion to the suffering Christ and Mary.

A Synthesis of the Arts

There are no indicators of the circumstances under which the manuscript originated because both the title page and original binding are missing, but it was created with 111 folios of fine parchment cut to 133 x 100 mm. The seven woodcuts decorating the manuscript originate from Hans Weiditz the Younger (1485 – ca. 1537), also known as The Petrarch Master, during his early period. They are characterized by their preference for a diagonal spatial perception, central compositional scheme, the proportions of dark and light areas, and the motifs of the ornamental frames. Weidtz was influenced by his master Hans Burgkmair (1473–1531) as well as other contemporaries like Albrecht Dürer (1471–1528), Hans Schäufelein (ca. 1480–1540), and Leonhard Beck (ca. 1480 – 1542). 23 pages are also adorned with elaborate woodcut frames with typical vegetal and zoomorphic themes that were likely colored in by the same hand that was responsible for the initials. The current leather binding from the turn of the 18th century was created in Tyrnau, Austria. 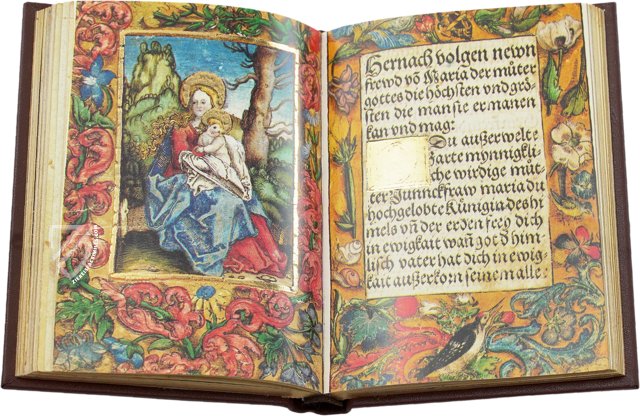 This popular scene in medieval Christian art depicts the vision of Christ with the wounds of the Passion, the so-called Man of Sorrows, which appeared before Pope Gregory I while performing mass. The miracle was supposed to have proved to a doubting woman who baked the communion bread that transubstantiation was in fact real. It reproduces the diagonal perspective of a woodcut by Albrecht Dürer on the same subject but in reverse with the Pope on the left and the altar on the right. 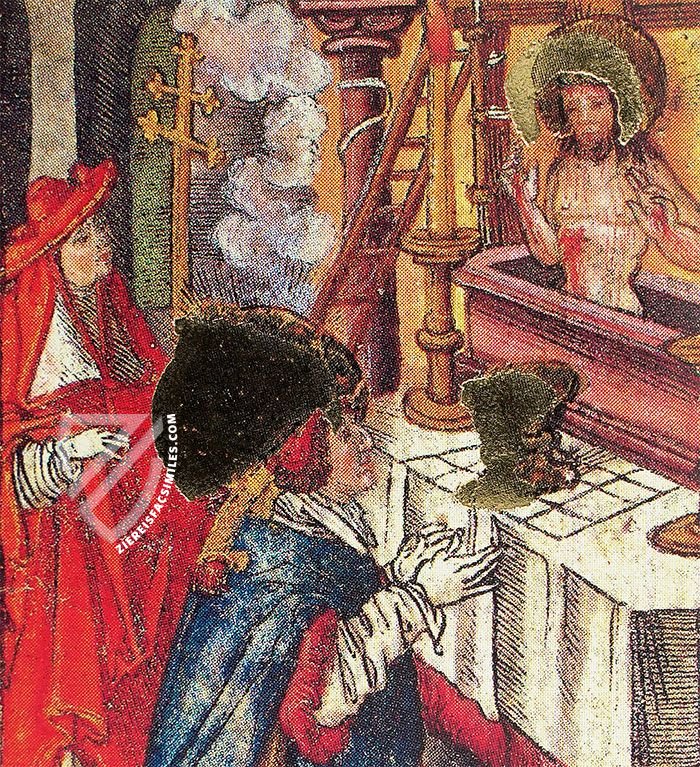 This woodcut is a variant of the sedes gratia or “Throne of Mercy”, a pictorial type in Christian art for representing the Trinity that first appeared in the late 10th century. It typically consists of an enthroned God the Father holding a crucified Christ in his hands as a dove symbolizing the Holy Spirit appears either above or between them.

Most depictions of the Throne of Mercy have a direct frontal perspective that confronts the beholder but Weidtz’s preference for the diagonal perspective makes it seem as though one were passing by this miraculous vision as it appeared on the side of the road. Like in the rest of the manuscript, the frame with vegetal and zoomorphic motifs is purely decorative and has no allusions to the primary scene. 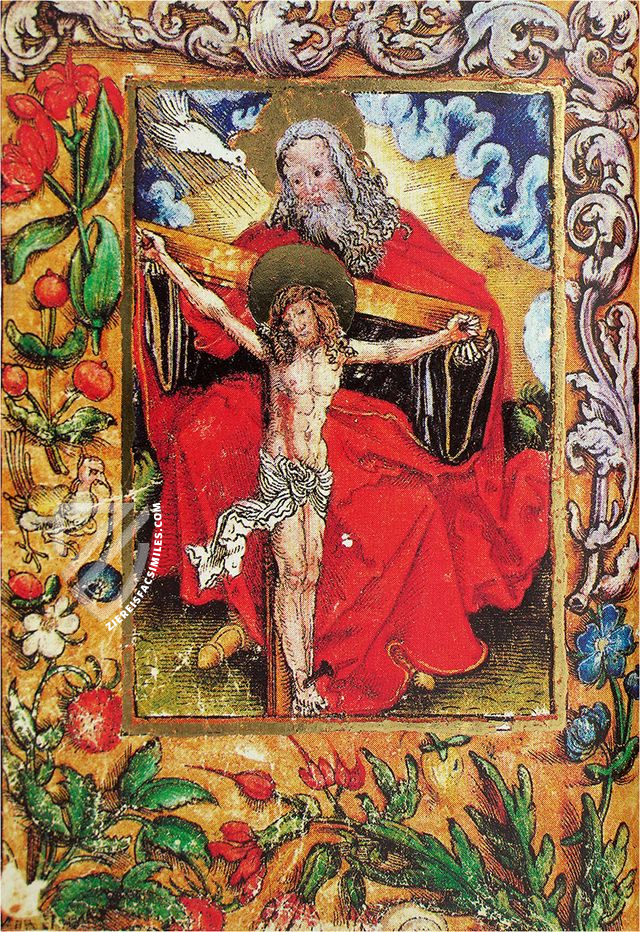 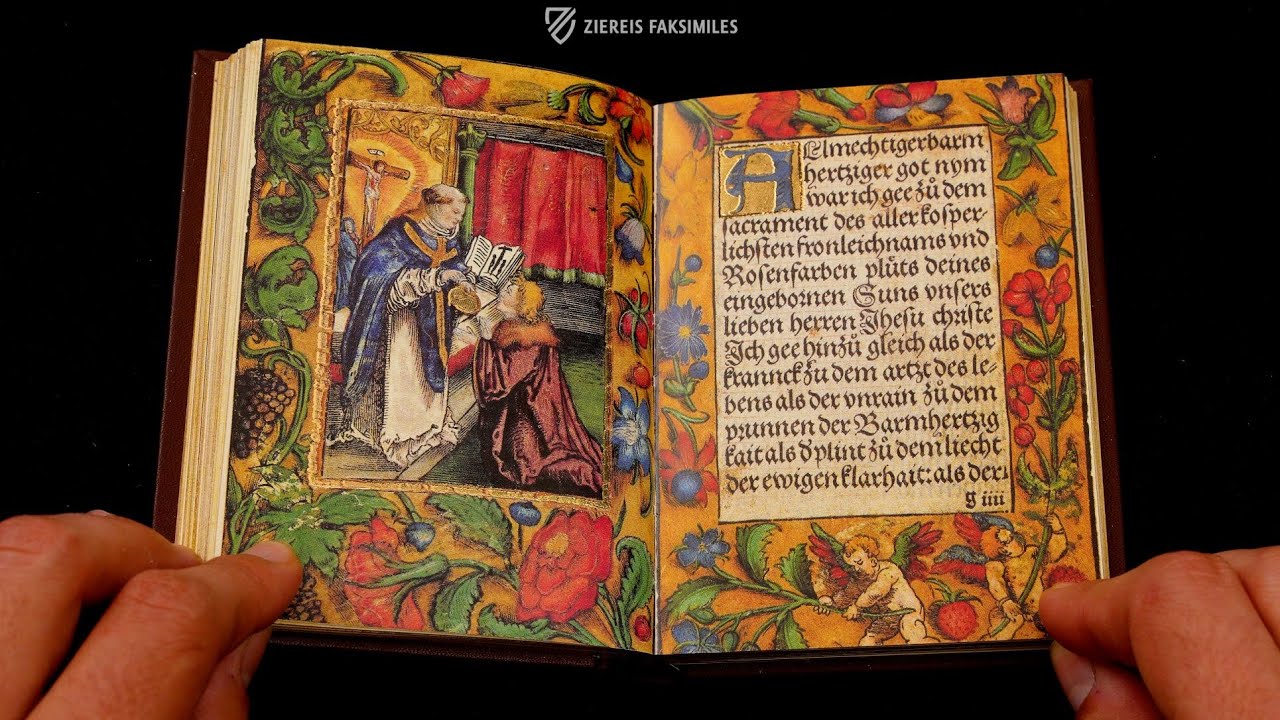 Publisher: Helikon – Budapest, 1993
Binding: The facsimile with gold embossed leather binding and gilt edges comes together with the commentary volume with half-linen binding in a velour case
Commentary: 1 volume by Eva Knapp
Languages: German, Hungarian
1 volume: Exact reproduction of the original document (extent, color and size) Reproduction of the entire original document as detailed as possible (scope, format, colors). The binding may not correspond to the original or current document binding.
Price Category: € (under 1,000€)
Edition available
Price: Log in here!
Order / Ask a Question
You might also be interested in: 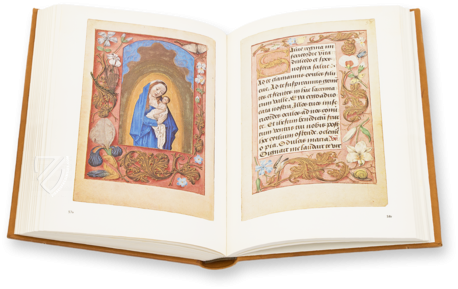 Older Prayer Book of Emperor Maximilian I
Bruges (Belgium) – After 1486

Obviously used frequently, even to learn Flemish later on: the personal prayerbook of Emperor Maximilian I, the "Last Knight", and a masterpiece of Flemish book illumination 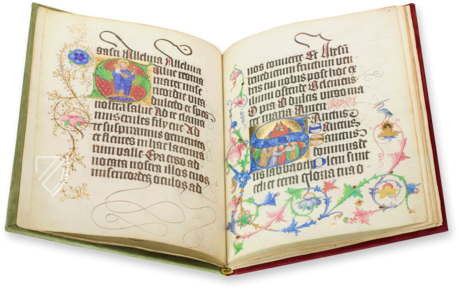