The so-called Forster Codices are three notebooks belonging to Leonardo da Vinci, one of the greatest universal geniuses in history. The private notebooks, originating in the years 1493–1505, contain exciting material related to Leonardo’s research and artistic creativity, but also personal, autobiographical notes, and the genius’ spontaneous thoughts. The eventful history of the bundle of three codices makes them all the more entertaining!

Leonardo da Vinci (1452–1505) left behind an unbelievable graphic and written body of work. His passionate work as a researcher and discoverer in every possible field and his outstanding position in the art of the Italian Renaissance lead to the impressive, precious legacy that is spread across the entire world. An ambitious project was begun in Italy in 1964, whose purpose was to preserve the memory of the national hero Leonardo da Vinci: the great National Edition of the manuscripts and drawings of Leonardo da Vinci, known as the Leonardo Codices.

A Bundle in London

Three of Leonardo’s notebooks, known as the Forster Codices, are stored today in the Victoria and Albert Museum in London. The bundle, consisting of three volumes measuring 14.5. x 10 cm, 9.5 x 7 cm, and 9 x 6 cm respectively, is a real treasure of Leonardo research, offering a truly comprehensive overview of wide-ranging themes with which the universal genius concerned himself. Additionally, the three notebooks originate from 3 different epochs during the time period 1493–1505.

The Universal Genius Made Tangible

The Forster Codices grant an unmitigated inside look into the idea world of Leonardo da Vinci. Here he recorded spontaneous thoughts on various scientific, artistic, and private themes: important mathematical and geometric studies, explorations into hydraulic machines, physical considerations and comments on grammar, cosmological studies, fables, jokes and quips, and so much more that needed to be discovered. Additionally, one finds a few studies of horses in the three books, e.g. of the bronze figure of the equestrian statue of Francesco Sforza, Duke of Milan, and autobiographical notes, e.g. regarding the expenses for the burial of his mother Caterina.

Alongside the masterful studies and drawings, the informative text gives us an additional aspect that makes the Forster Codices so interesting: their eventful history. From Francesco Melzi, who was heir to the entirety of Leonardo da Vinci's written and graphic legacy, the three notebooks came into the possession of Pompeo Leoni, then reached Venice and were acquired by Earl Edward George Lytton in the 19th century. After his death in 1873, the three volumes came into the possession of John Forster, whose name they bear today, and who bequeathed them to the Victoria and Albert Museum in London in 1876. 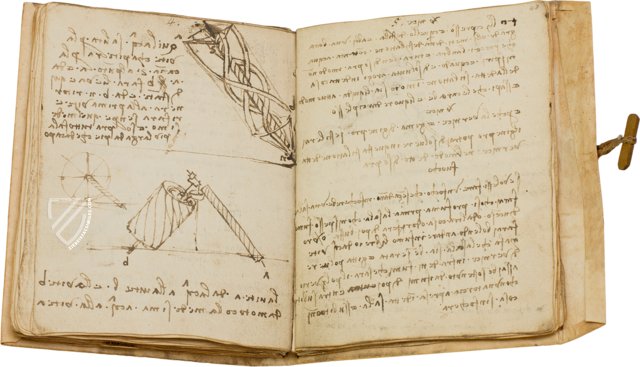 This page from the famous Da Vinci notebooks was created in Milan between the years 1495 and 1497 while Leonardo was in the employ of Ludovico Sforza, one of the greatest art patrons of the Renaissance. However, the Duke of Milan was not solely interested in Leonardo’s artistic talents, but also for his skills as an architect and engineer capable of designing both fortifications and war machines. These sketches address various theories concerning weight, traction, stress, and balance.

In the first volume of this collection, we find Leonardo’s notes and sketches regarding the geometry of Euclid, who was a Greek mathematician active in Hellenistic Alexandria ca. 300 BC. One of the first things one notices is the text, it appears illegible at first, but upon closer inspection it is written backwards. It is 16th century Italian “mirror writing”, used by Leonardo to either to make them difficult to read or simply because he was left handed.

This page specifically deals with Euclid’s theories regarding perspective, cones, and spherical geometry. Triangular, pentagonal, and other shapes are drawn extending into an infinite point in the distance. These studies would have been useful for both painting and designing architecture. 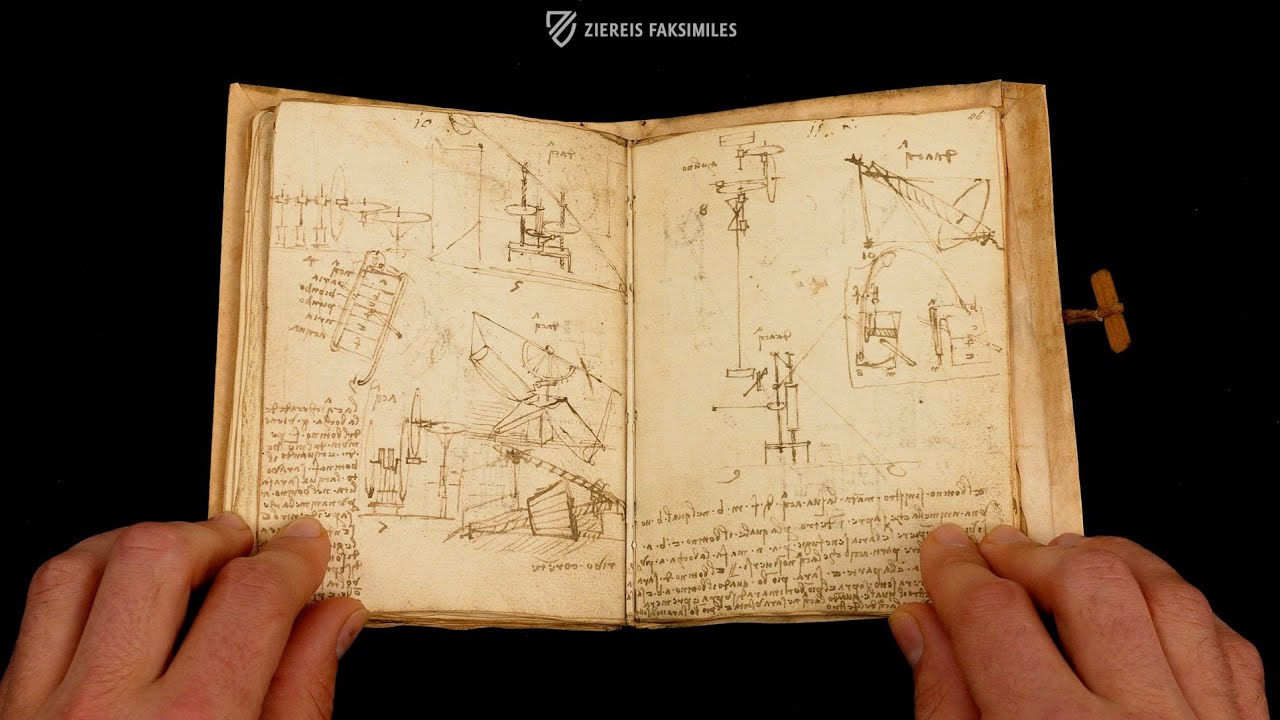