Born into the Bavarian noble House of Andechs, Hedwig became the Duchess of Silesia in 1201 after her marriage to Henry I the Bearded and rose to the rank of High Duchess consort of Poland alongside her husband in 1232. Hedwig and Henry lead pious lives, supporting and founding various monasteries and hospitals as well as providing aid to the poor. After witnessing the death of her only son in the Battle of Legnica during the first Mongol invasion of Poland, Hedwig established a Benedictine abbey on the site. As a sign of her piety, she is said to have gone barefoot, even in winter. Hedwig was canonized in 1267, less than 25 years after her death. The story of her life is preserved in a marvelous Gothic manuscript known as the Hedwig Codex or the Codex of Lubin, which was created by a certain Nycolaus Pruzie (Nicolaus of Prussia) in 1353 at the behest of the saint’s great-great-great-grandson, Louis I of Liegnitz-Brieg. It is adorned by 61 masterfully designed and wonderfully colored miniatures, which include rare depictions of the first Mongol invasion of Poland in 1240–41.

Also known as the Codex of Lubin, the Hedwig Codex is simultaneously a splendid example of Gothic illumination from Central Europe, a rare historical source on the First Mongol Invasion of Poland (1240–41), and a hagiography. The text describes the life and works of Hedwig of Silesia, who was so pious she was named a saint less than 25 years after her death – a rare example of a sainted noblewoman. Created to celebrate and codify the canonization of St. Hedwig, the manuscript helped to establish a cult around St. Hedwig. It once has served as a substitute for the holy saint and was revered almost as though it were a relic. Coveted for its artistic, religious, and historic significance, the manuscript has a fascinating history of ownership that has taken it from medieval Silesia to modern Los Angeles.

The Life of Saint Hedwig

Born Hedwig of Andechs in 1174, the Bavarian noblewoman was twelve when she married Henry the Bearded (ca. 1165–1238), the heir to the Duke of Silesia and someone with whom she could share her piety. After they became the Duke and Duchess of Silesia in 1201, the devout couple promoted the Christian faith and cultural development of Silesia beginning with founding Trzebnica Abbey in 1202. Henry rose to High Duke of Poland in 1232 and Hedwig became Duchess consort, allowing the couple to continue their charitable work with the poor, widows, and orphans as well as building hospitals for the sick.
It is said that after 22 years of marriage, during which time they had seven children, the couple lived together in celibacy. According to legend, she walked barefoot even in winter and when her confessor admonished her to wear shoes, she carried them and is usually depicted holding shoes and a church in her hands. Hedwig moved into the convent they founded after her husband’s death. She witnessed the death of her son in the Battle of Legnica in 1241 and founded a Benedictine abbey on the site along with his widow. Hedwig died in 1243 and was buried next to her husband in Trzebnica Abbey. She was canonized in 1267 by Pope Clement IV and relics of her are preserved at Andechs Abbey in Bavaria and St. Hedwig’s Cathedral in Berlin.

A Splendid and Unique Manuscript

In 1353, Duke Louis I of Liegnitz-Brieg (ca. 1321–98) and his wife Agnes von Glogau (ca. 1321–62) commissioned a sumptuously illuminated manuscript to celebrate the life of his great-great-great-grandmother and to also serve as a family genealogy. An inscription in the codex identifies the artist who created it as Nycolaus Pruzie (Nicolaus of Prussia), who completed the commission at the Duke’s court workshop. The text is adorned by 65 magnificent miniatures, two of which depict the Battle of Lebnica and a third shows the subsequent siege of Legnica castle. A full-page portrait of Saint Hedwig flanked by the patrons of the manuscript kneeling in prayer takes the form of a standard devotional image of a saint. Other miniatures depict members of Hedwig’s family as well as her life in the convent she founded. The illustrations are designed with delicate, slender figures and slightly washed-out interior spaces, although the perspective is mostly wrong, and tempera colors are shaded to emphasize the contours of garments.

This highly coveted manuscript has passed through various hands and lands in the 650+ years since it was created. After the Duke's death and in accordance with his wishes, the manuscript was transferred to the shrine of St. Hedwig in Brieg, where it was considered a relic of the saint. The manuscript remained in Poland for the next 250 years before coming into the possession of the royal house of Bohemia, which donated it to a monastery. When the monastery was dissolved in 1534 during the Protestant Reformation, it was moved to a local school. It was transferred to the western Bohemian town of Ostrov during the Thirty Years’ War, presumably for its protection, and was gifted to the Piarist monastery in Schlackenwerth in 1701 and was transferred to the city library when the monastery was dissolved in 1876.
In 1910, two Viennese art dealers named Gilhofer and Ranschburg acquired the manuscript and sold it to Rudolf von Gutmann. The manuscript, along with the rest of Gutmann’s collection, was confiscated by Nazi authorities and transferred to the Austrian National Library in Vienna. During the Second World War, it was evacuated to the salt mines near Alt Aussee, recovered from there after the War, and returned to its former owner in 1947. Gutmann brought it with him to Canada and sold it to H.P. Kraus around 1964, who brought it back to Europe, during which time a facsimile was made. After being acquired by the Ludwig Collection in Cologne, it was purchased in 1983 by the Getty Museum in Los Angeles, where it has been featured in 36 exhibitions and remains there today. 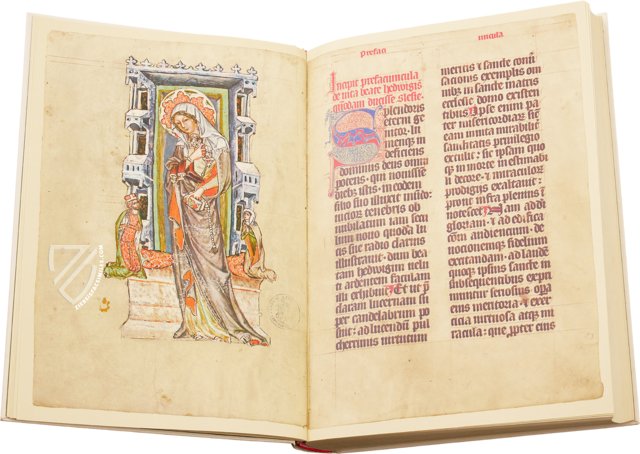 The Mongols Carrying the Head of Henry before Castle Liegnitz

Aside from depicting the life of Saint Hedwig, the manuscript is prized for its depictions of the first Mongol Invasion of Poland. After the death of her husband, their son Henry II the Pious assumed the titles of Duke of Silesia and High Duke of Poland in 1238 but was killed and beheaded three years later at the disastrous Battle of Legnica. The Mongols wear Phrygian helmets, often given to pagan enemies in medieval art, as they parade before the walls of the castle and try to break the morale of the defenders. 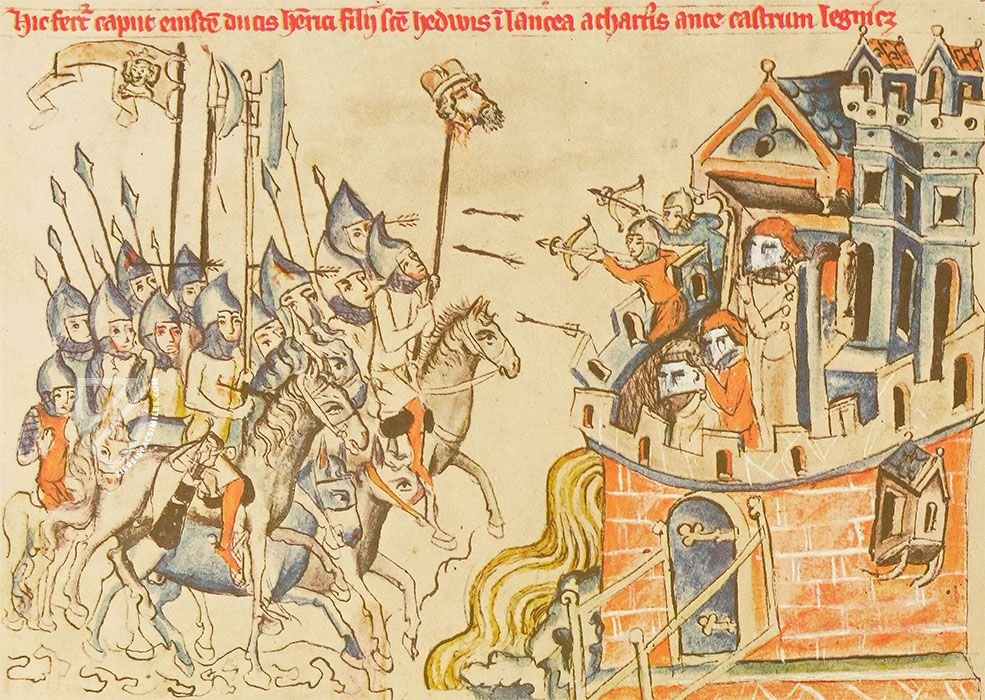 This full-page miniature of Saint Hedwig is unique in the manuscript: unlike the others, which depict events from her life, she is presented here in the form of a standard devotional image of a saint. She is flanked by the patrons of the manuscript, Duke Louis I of Liegnitz-Brieg, Hedwig's great-great-great-grandson, and his wife Agnes of Glogau.

Hedwig is sumptuously dressed as an aristocrat but carries her boots over her arm, making her barefoot in imitation of the Apostles, and she wears no crown as a further sign of humility. The objects she holds symbolize her devotion: a statuette of the Madonna and Child, a rosary, and a prayerbook in which she marks a page with a finger to suggest she was praying when this “snapshot” was taken. 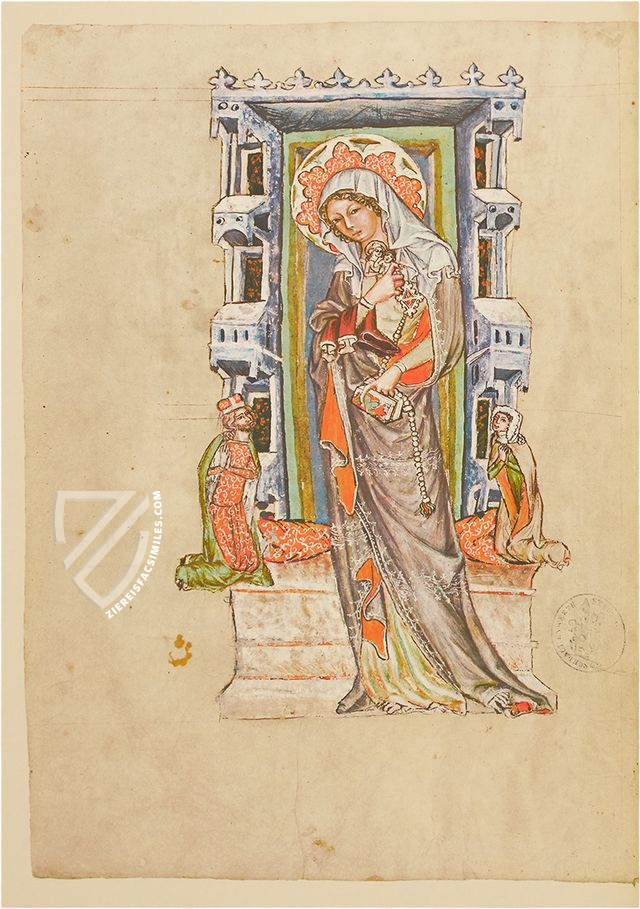 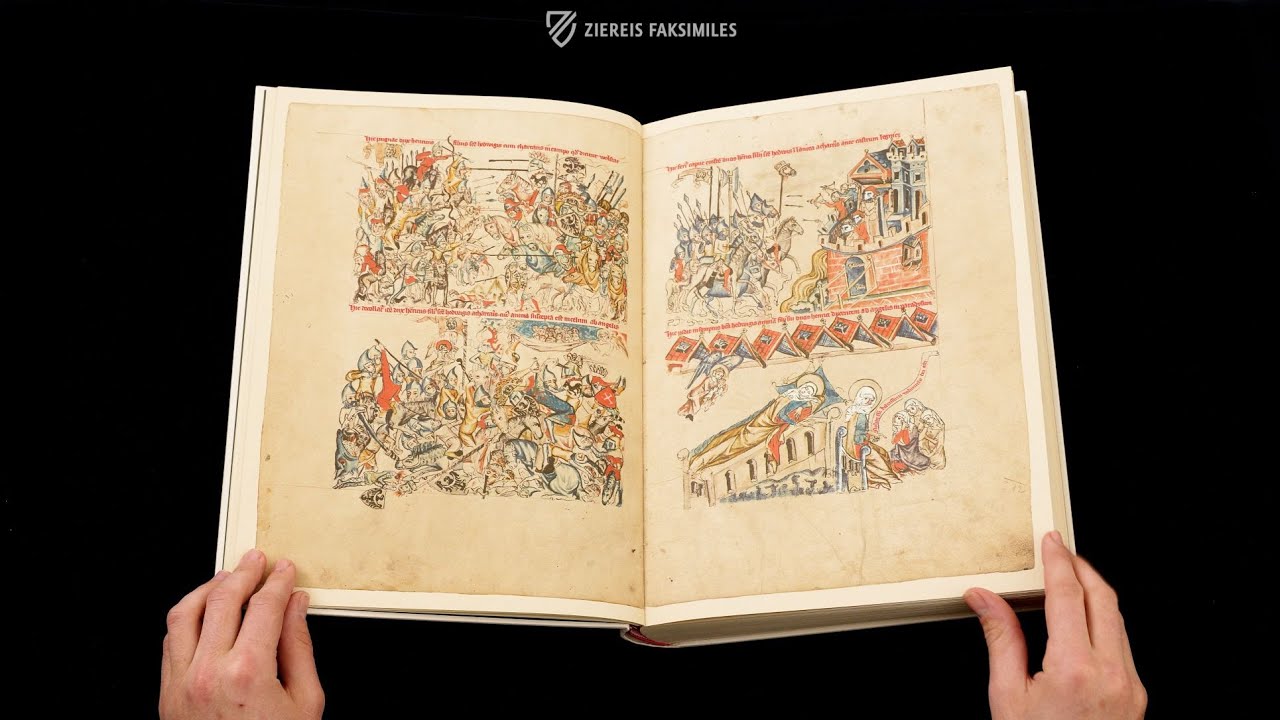