In ancient Roman mythology, Pomona was a wood nymph and the goddess of fruitful abundance whose name comes from the Latin pomum for “fruit”, orchard fruit specifically. The Herefordshire Pomona is a catalogue of apples and pears grown in the county of Herefordshire, England. Created in the late-19th century, it was one of the earliest attempts to systematically record the varieties of English fruit and is regarded as “a classic of late Victorian natural history”. Only 600 copies were ever printed and are highly coveted by bibliophiles today.

The Herefordshire Pomona is the result of years of meticulous cataloguing by Dr. Robert Hogg and Dr. Henry Graves Bull and was painstakingly illustrated over a period of eight years by Alice Blanche Ellis and Edith Elizabeth Bull. It was commissioned by the Pomona Committee of the Woolhope Naturalists' Field Club of Hereford, which held an annual autumn show exhibiting local varieties of apples and pears. Before being published as a two-volume set in 1885, it appeared as seven issues between 1878 and 1884 and includes a total of 441 watercolor lithographs.
Members of the club began to worry that although Herefordshire was famous for its orchards “it was very remarkable that so few of the best varieties of apples should appear in the markets, or the fruit shops”. The Pomona Committee commissioned Hogg, who was Vice-President of the Royal Horticultural Society and editor of the RHS Journal at the time and had already written a book titled The Fruit Manual, and Bull, a local doctor and former president of the Woodhope Club, with creating a catalogue of the apples and pears of Herefordshire.

The creation of this work was financed by subscriptions paid by the nobility and gentry of Herefordshire and its neighboring counties. Its hand-colored lithographs of different fruits, buds, blossoms, and the blights that attack them were created by the Belgian firm of G. Severeyns. After all seven parts of the series were complete, they were brought together and published by Jakeman & Carver under the title The Herefordshire Pomona Containing Original Figures and Descriptions of the Most Esteemed Kinds of Apples and Pears. No expense was spared in the printing process. Furnished with pebbled green Morocco covers, raised bands, and gilt decorative panels, these sought-after codices have recently sold for more than £10,000. Their descriptions were then brought to life in vibrant watercolors by Ellis and Bull, the latter of whom was Henry’s daughter. This is a true masterpiece of both pomology and lithography. 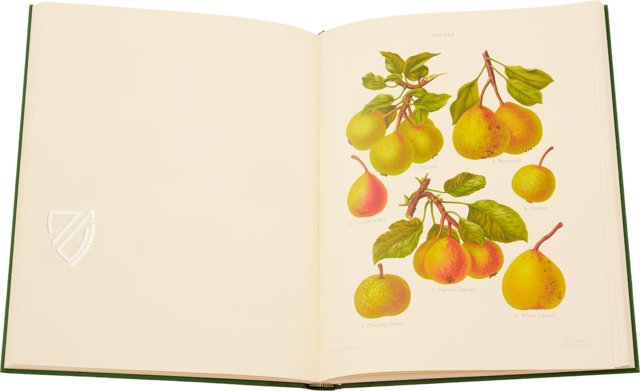 #1 The Herefordshire Pomona Containing Coloured Figures and Descriptions of the most Esteemed Kinds of Apples And Pears
The Folio Society – London, 2014
Limited Edition: 980 copies
Detail Picture

Mespilus germanica, known as medlar, is a fruit-bearing tree that has been cultivated for around 3,000 years and was cultivated in the Roman Empire. It is unusual for bearing fruit in winter, which is eaten after being bletted by frost, a process of softening fruits beyond ripening. Despite its name germanica, it is believed to originate from the western and southern coasts of the Black Sea. The Dutch Medlar, also known as “Giant” or “Monstrous”, is one of the cultivars grown for its fruit. 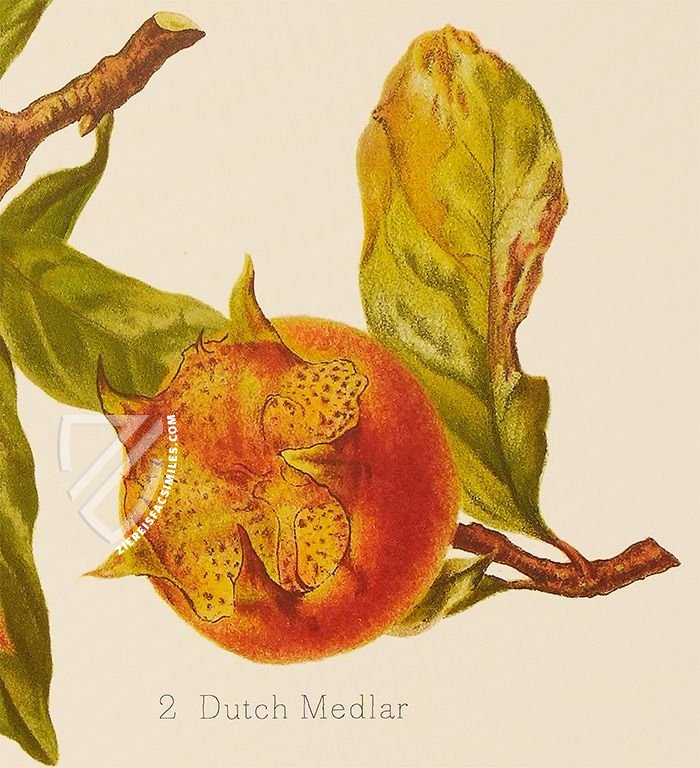 Belonging to the genus Malus, there about 30–55 varieties of crabapple, eight of which are artfully presented here. It is cultivated primarily as an ornamental tree that blossoms in the spring and provides colorful fruit in the fall. Applewood is prized for smoking meats because of the pleasant scent it gives off while also burning hot and slow.

Although not an important crop, crabapples are an excellent source of pectin and some varieties are made into preserves, added to cider for a more complex flavor, or are eaten with salt and chili or shrimp paste in parts of Southeast Asia. Called Wergulu in Old English, it is one of the nine plants invoked in the pagan Anglo-Saxon “Nine Herbs Charm”, which was recorded in the 10th century. 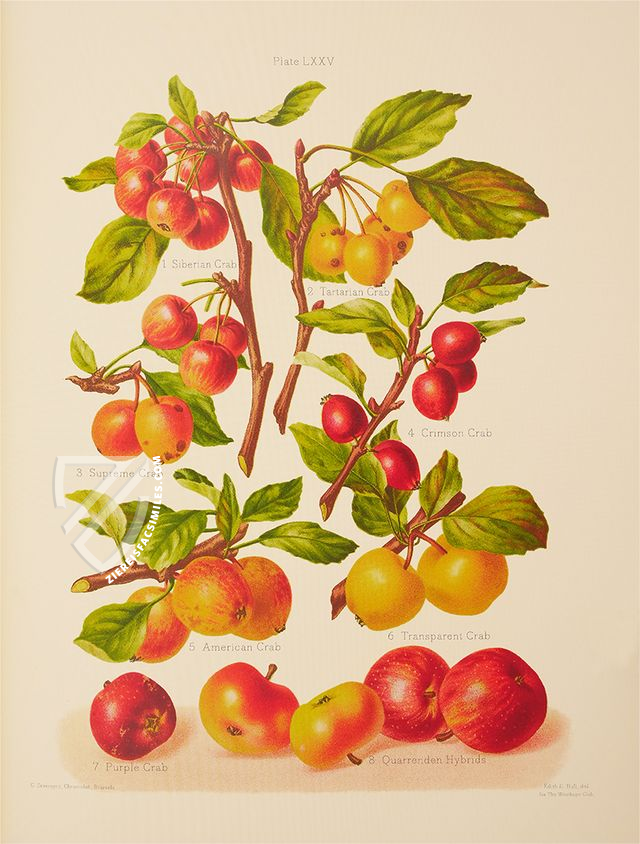