Despite the fact that the identity of its author is still debated, the Flower of Virtue is a collection of moralizing texts that enjoyed great popularity and was translated into numerous languages including French, German, Spanish, Catalan, Russian, Armenian, and Croatian. The text was originally written in strongly dialectical Italian under the title Fiore di virtù between 1310 and 1323 by “Brother Tommaso”, theorized to be Tommaso Gozzadini (1260–1329), a Bolognese notary. It consists of 35 chapters juxtaposing a series of virtues and vices, each associated with an animal in the manner of a bestiary, while also presenting the views of various philosophers or Bible quotes on the subject. This gorgeous manuscript from ca. 1530 is a French translation of Fleur de vertu by François de Rohan (1480–1536), Bishop of Angers, Archbishop of Lyon, and Primate of France. It is adorned by 48 gorgeous miniatures in the French Renaissance style and countless fine initials in red, blue, and gold.

This collection of morally edifying literature is inspired by texts from Gilles de Rome (ca. 1243–1316, Thomas Aquinas (1225–74), and the Convivio by Dante Alighieri (ca. 1265–1321), an unfinished work written between 1304 and 1307 representing a vernacular Italian encyclopedic work on the subjects of philosophy, politics, linguistics, science, astronomy, and history. Both Gilles de Rome and Thomas Aquinas were respected Scholastic philosophers and theologians while Dante Alighieri, author of the Divine Comedy, was arguably the most influential literary figure of the Middle Ages and modelled himself on such Scholastics. Together, they represent a Holy Trinity of authoritative medieval writers of moralizing literature who had a far-reaching impact on European society.
Each chapter of the work addresses a vice or virtue, which is first defined before it is addressed by the opinions of various philosophers or quotes from the Bible. A story presenting an example of this virtue or vice, usually in the form of allegory, completes each chapter. This text, written in strongly dialectal Italian, is believed to be the work of Tommaso Gozzadini (1260-1329), a notary from Bologna, but the debate among researchers concerning the provenance of the manuscript remains unresolved. 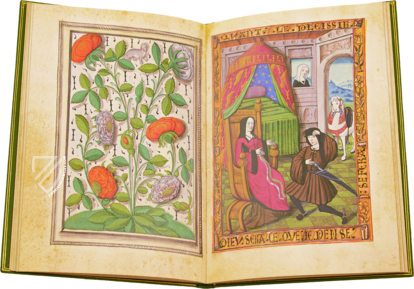 Book of Lovers
France – Beginning of the 16th century 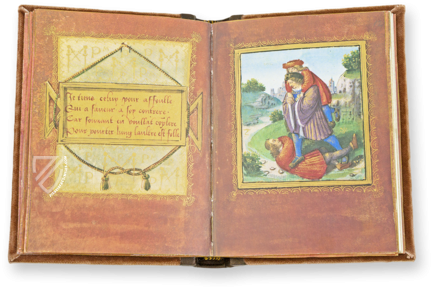