The Way of Poverty or Riches was a verse narrative that served newlywed nobles after their wedding as a handbook for a happy marriage. The tale was furnished with high-quality miniatures and enchanting marginal decorations by the most gifted Parisian artists from the circle of the Bedford Master in 1420. The brightly colored and highly-detailed pictures tell of the lives and work of people in the Middle Ages in an enchanting manner.

The Way of Poverty or Riches is a verse narrative originating from ca. 1342. The tale deals with the lives of the recently married young couples and served as a handbook for a happy relationship. The manuscript enjoyed such great popularity after its release that it has been copied countless times and disseminated in multiple languages. Nevertheless, only one transcription was illustrated with incredibly beautiful, style-setting miniatures. This very same edition has 46 brightly-colored, exceptionally designed pictures in the late-Gothic style that illustrate the manuscript. The miniatures depict scenes from everyday life in the Middle Ages in an artistically responsive way. Additionally, 74 gold initials and opulently embellished bordures adorn the beloved work.

A Medieval Adventure Story from Paris

The verse narrative concerning a fulfilled life was composed by a cleric from Paris, namely Jacques Bruyant. It is constructed like a medieval knight’s tale, in which the narrator undertakes an adventure and is continuously confronted with the virtues and vices of the world. The illuminated edition belongs to a small group of illuminated manuscripts, all of which originate from the environs of the famous Bedford Master of Paris. For a long time, he was the most talented and influential book artist in all of Europe and combined stylistic influences from leading examples with his own creative ideas. The particularly charming pictorial composition in The Way of Poverty or Riches impresses through an exceedingly refined color scheme, unbelievably plastic representations of forms and faces, and a realistic perspective. Noble bordures in the typical Bedford-style round out the breath-taking illustration of the manuscript.

A Journey into the Past

The charming picture books carries its beholder off into times long-passed and depicts everyday life and work during the Middle Ages in splendid colors. One sees peasants working in the fields, green pastures and fields in bloom, impregnable fortifications and castles, and winding secret paths that lead through medieval cities and villages. By the same token, the beholder is granted very personal, private glimpses into the past. Thus one can see medieval parlors and bed-chambers, typical pieces of furniture as well as tools and clothing. The book transmits an exceptionally detailed, realistic impression of life in times past and depicts this in a breath-taking manner.

The miniatures of The Way of Poverty or Riches are drawn in the style of international Gothic, the so-called “soft-style”. This stylistic direction in book art developed through the exchange of talented masters throughout the most important artistic centers of Europe. The interesting coloration of the miniatures is typical for this style. They win one over not only with their boundlessly bright and colorful palate, but also shine through their finely applied gold and silver accents. As is typical for the soft-style, the opulent bordure adornment of the book’s pages consists of fat marginal decorations of shining gold ivy leaves, in which acanthus leaves, small flowers and ever more fruits and animals are interspersed. The meticulously painted initials against a golden background are encompassed by lavish grape leaves of gold. 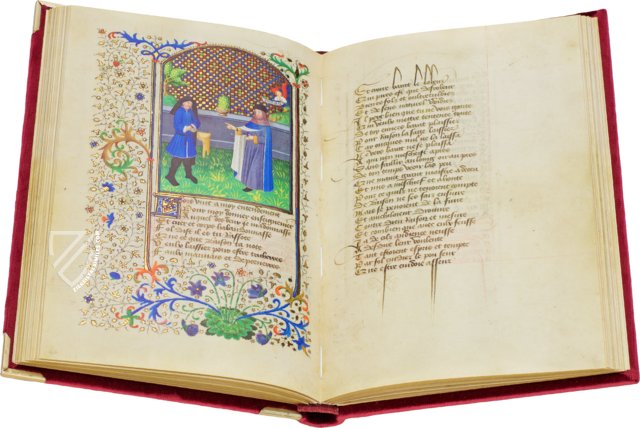 This is an entertaining and dynamic scene from the moralizing piece of literature at hand. An amorous and presumably unmarried couple has been discovered postcoitus and the chambermaids have roused the guard. He is depicted as an elaborately dressed late-medieval soldier whose “partisan” – a polearm common in the Late Middle Ages – rests in the background. The commotion of the scene is remarkable as the young man is beaten by one of the women while he is dragged out of bed naked by the others. 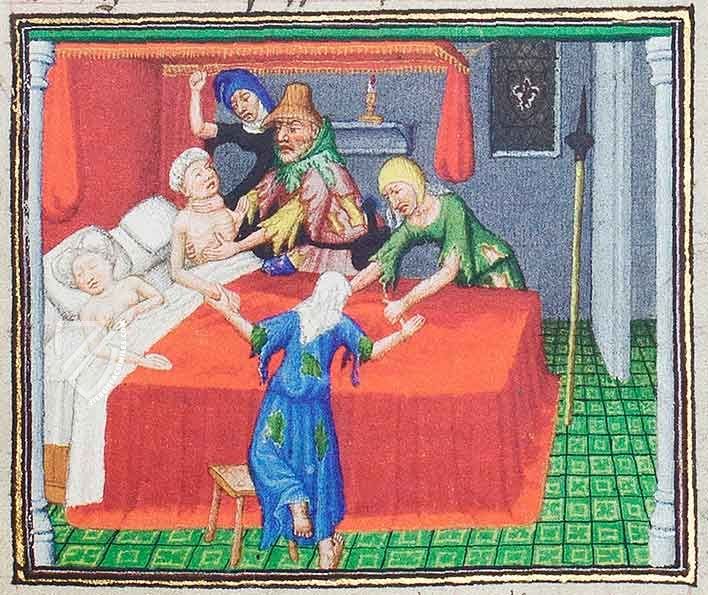 The Castle of Labor

Introducing the fortieth chapter of the manuscript, this miniature is an allegory for the benefits of hard work. It is a vision presented to the protagonist referred to simply as the Newlywed, who is visited in a dream by Want, Necessity, Suffering, and Hunger who scold him for not having found work. He is eventually saved by Reason, who shows him the path to a virtuous life.

Presented in a delicate red/gold frame, the castle’s construction offers the opportunity to demonstrate various tool such as hammers, saws, and instruments for measuring cut stone. Amongst the flowering tendrils in the margins, four figures appear performing the principal activities of the four seasons: sowing, reaping, woodcutting, and harvesting grapes. 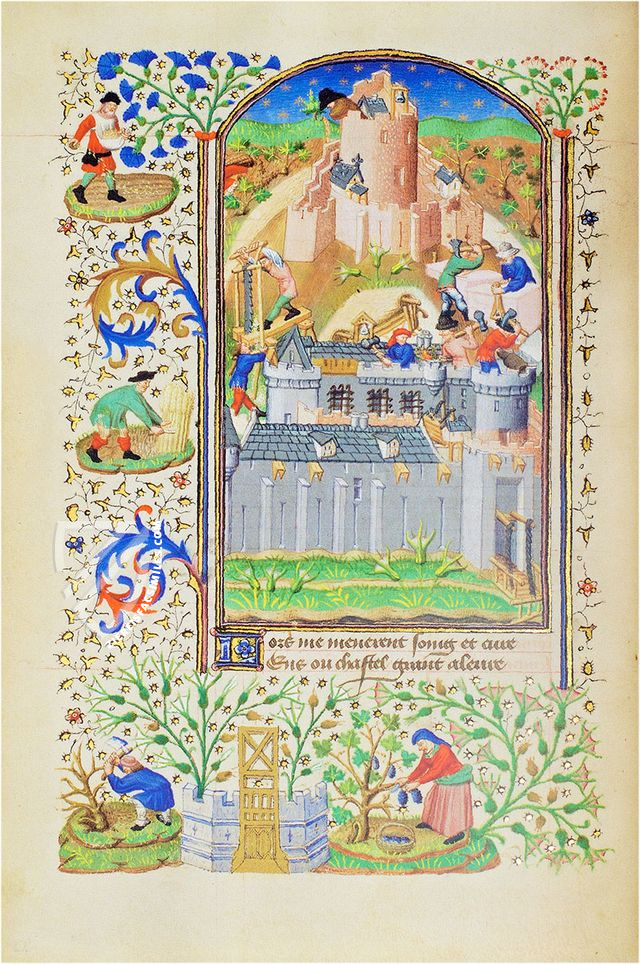 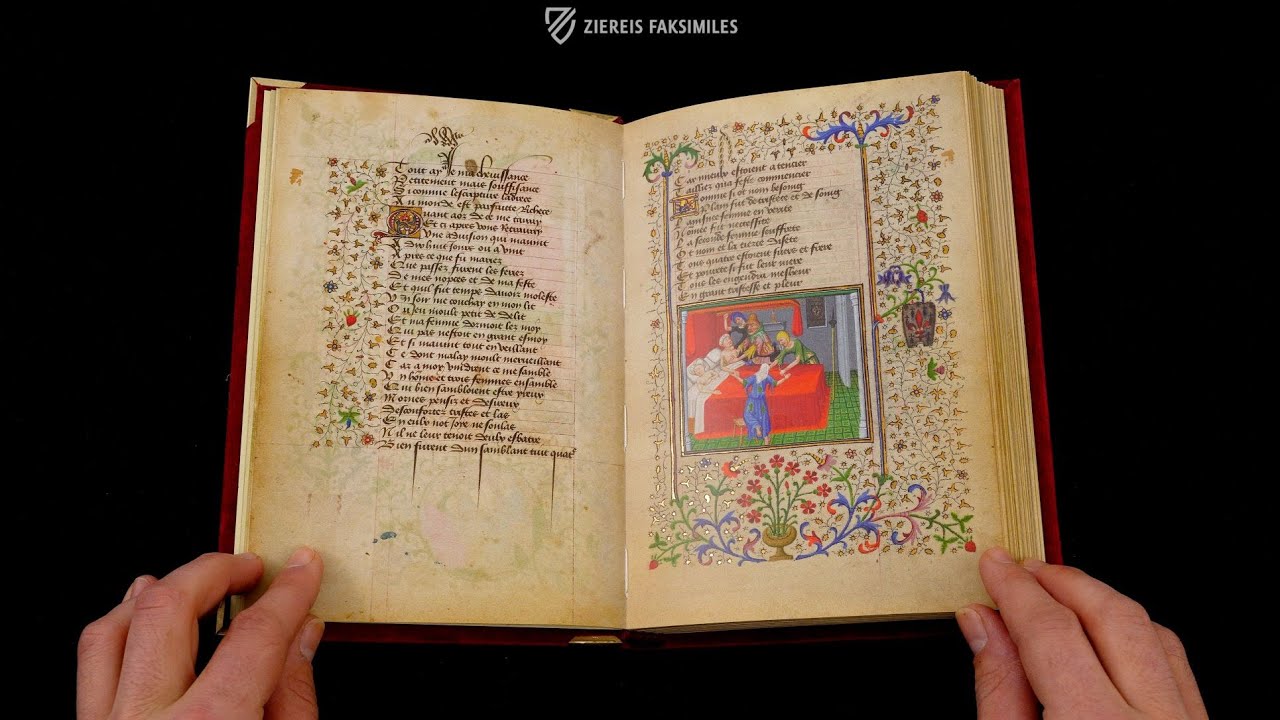