Although peasant uprisings occurred throughout the Middle Ages, the German Peasants’ War of 1524–25 was unparalleled in terms of size and violence. It broke out across Alsace and southwestern Germany before quickly spreading to central Germany and Austria and although its causes are still debated, scholars agree that it resulted in the deaths of at least 100,000 people, mostly peasants. Delegates from the three main groups of rebellious peasants met and agreed upon the Twelve Articles, a list of demands that asserted civil liberties as natural rights for the first time in Europe. These meetings are considered to be the first constituent assembly on German soil.
Abbot Jakob Murer’s account describes the war as it occurred in the area around Ravensburg, Germany from the perspective of the authorities suppressing the revolt. Although Murer expresses some sympathy for the peasants and emphasizes his attempts at mediation, he ultimately rejects their aims and actions. 11 double-page pen and ink drawings illustrate the events, often depicting several successive events, even spatially separated ones, within a single picture, and buildings are limited to what was essential for recognizing a location. 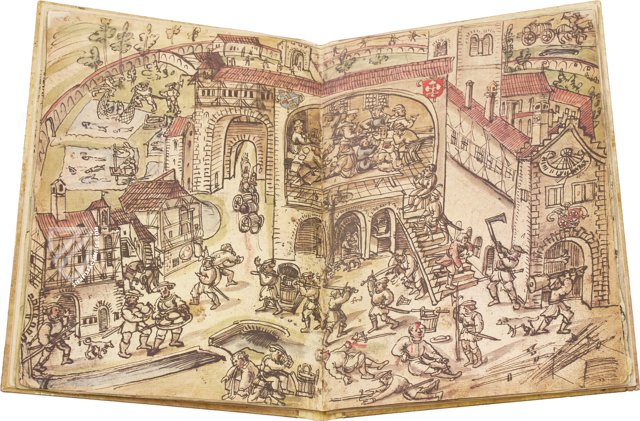 The Surrender of the Inhabitants of Ummendorf

With their arms and armor piled up in the foreground, the peasants of Ummendorf submit to the forces of the Swabian League as they raise their right hands and swear a new oath of obedience to their noble masters. The baseness and commonness of the peasants, as well as the prejudice of the author and artist against them, is emphasized by their lack of color and they are merely depicted as an ambiguous mass in comparison to the heavily armored men-at-arms with plumed helmets who are mounted on powerful warhorses.

The Plundering of Weissenau Monastery

Sometime in early March of 1525, a peasant army invaded the author’s monastery and sacked it. The interior scene in the upper center of the page shows the peasants’ leaders sitting in the dining room of the abbot’s house with four canons and the clergy appear to be treated with respect. However, outside one of the peasants vomits off the balcony and into the streets where chaos reigns.

The monastery is pillaged for supplies and peasants can be seen smashing in doors with axes, pulling in nets full of fish, carrying away armfuls of bread, lugging bags of grain over their shoulders, and hauling away either kegs of beer or barrels of wine on carts. Overall, the peasants are portrayed as a violent pack of clumsy drunks and thieves fighting among themselves and defying God’s order.