László Báthory de Császár was a Pauline monk and the first translator of the Bible into the Hungarian language. Although none of the original manuscripts of this translation from the 15th century have survived, a 16th century manuscript is believed to be a direct copy of Báthory's work. The Jordánszky Codex is named after Bishop Elek Jordánszky, an 18th century owner of the manuscript. It was discovered in three fragments, the last of which was identified in 1880 and reattached to the rest of the manuscript. Today it is stored in the Cathedral Library of Esztergom and is regarded as one of the most important monuments of the Hungarian language.

From the 10th to the mid-13th century, the capital of the Kingdom of Hungary was located in the city of Esztergom, which continues to be an important historical, cultural, and historical center in Hungary. Esztergom Basilica is the seat of the Catholic Church in Hungary and is also the largest church and tallest building in the country. It also houses a tremendous library consisting of ca. 250,000 books including some of the most important documents in the history of the country, including the oldest surviving complete translation of the Bible into Hungarian, the so-called Jordánszky Codex from 1516-1519. This codex is believed to be to have been directly copied from the now-lost 15th century original manuscript and is prized as a treasure of the religious and linguistic history of Hungary.

Created in a Cave

László Báthory (ca. 1420–1456) was a Pauline monk educated in France and Italy who retreated to ascetic solitude in a small cave near the top of Nagy-Hárs Hill in 1437. There he lived as a hermit for twenty years and used this time to translate the Bible from Latin into Hungarian as well as writing numerous hagiographies. Weakened by two decades of penance and fasting, he returned to the Pauline monastery in Budaszentlőrinc where he died shortly thereafter. The devout Báthory attended mass on the day of his death and was buried in front of the altar of St. Stephen in the monastery’s church. His work was stored in the impressive Bibliotheca Corviniana but was lost when the library was sacked by the Turks after the Battle of Mohács in 1526.

The Jordánszky Codex was created between 1516 and 1519. Some of the texts, including parts of the Old Testament and the Gospels, were copied by Lea Ráskay, a Hungarian nun, librarian, and scholar who worked in the scriptorium of a Domincan monastery on Margaret Island in the Danube River in Budapest between 1510 and 1527. Named after Elek Jordánszky (1765–1840), the Bishop of Tinnin and a canon of Esztergom, it was discovered in three fragments during the 19th century. Two of the fragments became the property of the Esztergom Cathedral Library by the year 1820 and the last fragment consisting of the codex’s first 23 sheets was purchased for the sum of 300 HUF in 1880 from József Csemez (b. 1855), a headmaster in Győr, by the Archbishop of Esztergom, János Simor (1813–91), and reunited with the rest of the manuscript. It is jealously guarded today as one of the largest and most important monuments to the Hungarian language. Helikon – Budapest, 1984
Publisher: Helikon – Budapest, 1984
Commentary: 1 volume
Language: Hungarian
1 volume: This facsimile is not complete. Reproduction of the entire original document as detailed as possible (scope, format, colors). The binding may not correspond to the original or current document binding. 2 of the 6 lost leaves in the Esztergom manuscript are replaced by facsimile pages from a version in the Széchényi National Library.
Price Category: € (under 1,000€)
Edition available
Price: Log in here!
Order / Ask a Question
You might also be interested in: 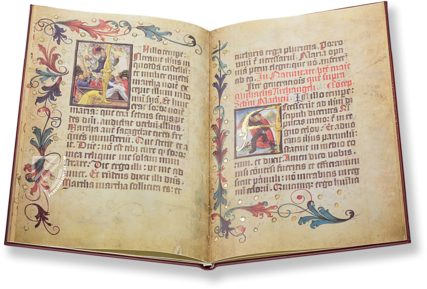 A richly decorated masterpiece from Hungary: the great artistic styles of the Late Middle Ages united in a single codex 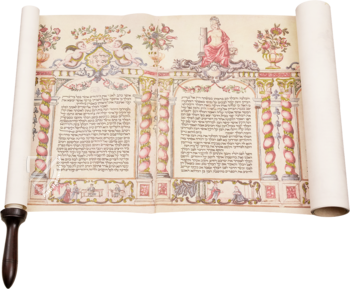 Presented as a scroll in the splendor of Renaissance illumination: how Queen Esther saved the Jews from certain annihilation at the hands of the schemer Haman