A previously unknown masterpiece of the Late Middle Ages was made in Cologne between 1480 and 1490: the Liber Precum, which now resides in St. Petersburg. Aside from the illumination, the work of a leading master at the time, the manuscript boast a thus-far unparalleled choice of texts. Featuring 41 full-page miniatures, the prayer section of the small-format book is arranged with the miniatures always opposite of their corresponding prayers from the Vita Christi. The illustrations combine the "Soft Style" of illumination with a newer, more realistic approach, making them of particular interest, like other transitionary works. Sophie Dorothée von Württemberg brought the manuscript with her to the Imperial Russian Court, where she became a Grand Duchess and eventually Tsarina.

The facsimile of the Liber Precum now in St. Petersburg places a hitherto unknown masterpiece of late medieval illumination at the center of interest of both bibliophiles and scholars alike. Made between 1480 and 1490 in Cologne, one of the foremost schools of illumination at the time, the small-sized volume presents a number of particular features which make it stand out among the countless prayer books produced in this period, conferring on it an unmistakable character and significance. One of its extraordinary features is a thus-far unparalleled choice of texts. The biggest surprise, however, is the illustrated cycle on the life and passion of Christ, which in terms of form, function, subject matter, and because of its large content, presents a true highlight of 15th century book illumination.

A Unique Illustrated Cycle on the Life of Christ

The most striking feature of the Liber Precum now in St. Petersburg, is no doubt its cycle of illustrations, which is truly unmatched because of its extent and its narrative and artistic qualities. It constitutes the most complete and, iconographically speaking, richest picture cycle on the life and Passion of Christ ever made in this era of illumination. A total of 41 full-page miniatures illustrate the prayers in the first portion of the manuscript, which is now the object of a faithfully reproduced facsimile edition. Special attention is to be paid to the fact that the illustrations on the left hand page are paired with the relevant texts on the page opposite. When following the natural line of sight, they provide the visual impulse necessary to grasp the theme and mood conveyed in the subsequent prayer texts. The textual significance of the manuscript as a devotional book is mirrored by the overall tone underlying the miniatures, intended to convey all kinds of emotions. The dynamic figures interlinked by eloquent gestures, facial expressions, and a certain inner tension, the atmospheric scenery and the subtle color tones are all dominating elements that give the illustrations their particular charm, obviously the work of a highly talented master of his genre.

During the second half of the 15th century, the artist was one of the leading protagonists of the painting school in Cologne from which emanated decisive impulses for the development of panel painting in Germany throughout the 15th century. One of its prominent masters, Stephan Lochner, is thought to have perfected the so-called "Weicher Stil" (Soft Style) in late Gothic painting. The foremost achievement of the painting style developed in Cologne - a mixture of the delicate Soft Style and a new realistic approach - not only dominated the large art form of panel painting but also entered the sphere of book illumination where it was mainly used in full-page miniatures. The models used for our manuscript to which its creator owes his name, show it as being the work of an outstanding artist who mastered the new style down to the tiniest details. In this prayer book, the "Master of the Liber Precum in St. Petersburg" created a jewel to further enrich the large and varied corpus of German late medieval illuminated books.

A Monument to Modern Piety

Another striking feature is the choice of text, which deviates largely from the usual scheme: the manuscript contains two larger portions of text that were written and decorated separately. The first one comprising a sequence of prayers on the Vita Christi (life and passion of Christ), while the second one assembles a series of prose and verse sermons as well as a further series of prayers. This choice of texts reflects the ambition to deepen the personal devotion of the readers and to make them follow the example and teachings of Christ in their everyday life. The work is thus in line with the tradition of "devotio rnoderria", an important spiritual movement founded in the 14th century and whose everyday mysticism led to it being ever more widely acclaimed in a time of political upheaval, which also had an impact on ecclesiastical matters.

Journey to the Russian Imperial Court

It seems a stroke of fate that our manuscript was kept in the summer residence of Empress Maria Fyodorovna in Pavlovsk until the year 1929. Sophie Dorothée von Württemberg had married the Russian Grand Duke and later Tsar Paul I in 1776 and enjoyed wide popularity throughout the country due to her work for charity and as a patroness of the arts. Her heirs finally bequeathed the prayer book to the Russian National Library in nearby St. Petersburg, located only 30 km from Pavlovsk Palace. 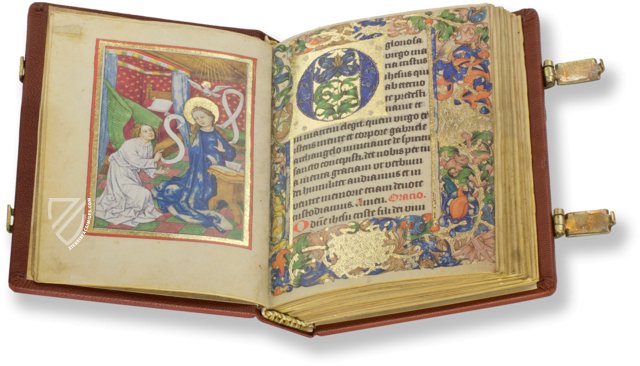 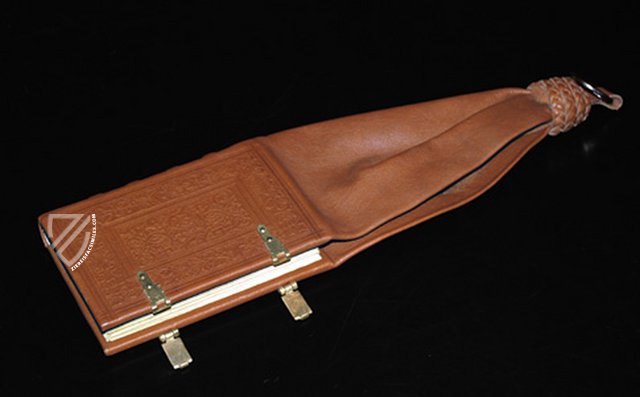 One of the most powerful images from the story of the Vita Christi is that of Jesus, son of God, bathing the feet of his disciples in an unbelievable act of humility that they initially try to resist. “For I have given you an example, that you should do as I have done to you. Most assuredly, I say to you, a servant is not greater than his master; nor is he who is sent greater than he who sent him. If you know these things, blessed are you if you do them.” (Jn 13:15-17) 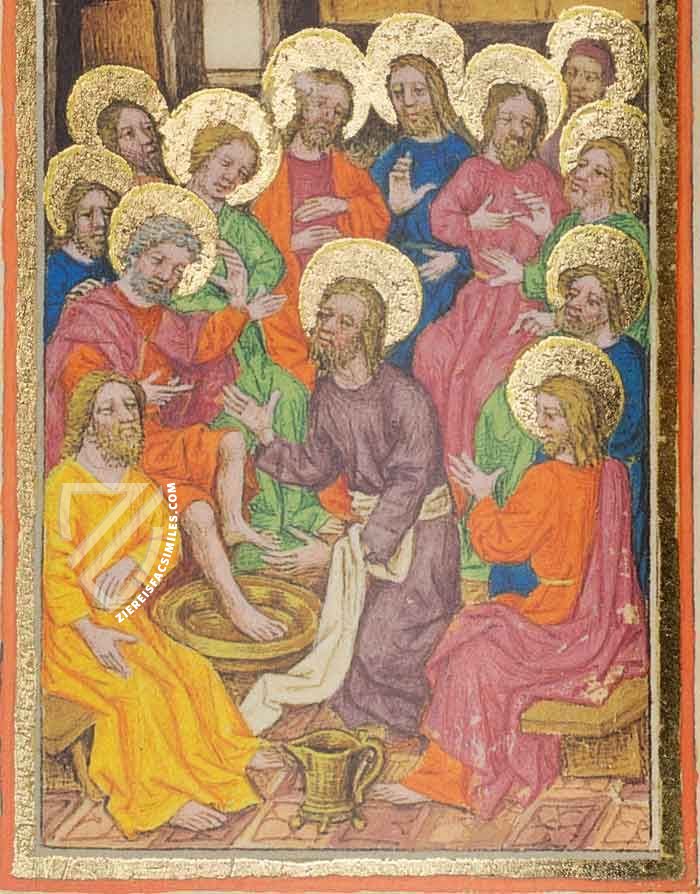 This famous scene from the Garden of Gethsemane is one of the most popular in medieval Christian art. This scene mixes classical forms, such as the robes worn by Jesus and his disciples, with contemporary clothing and armor worn by the soldiers who have come to arrest Jesus. In the scene, Jesus is seized in the moment that he is kissed by the treacherous Judas.

This colorful scene it presented within an understated frame of red and gold leaf. Although Christ is at the center of the scene and highlighted with a gold leaf halo, the bright yellow robe worn by Judas draws attention to his treachery. The armor of the period is portrayed with a surprising degree of detail, as are the boots, tights, and hats that were popular at the time. 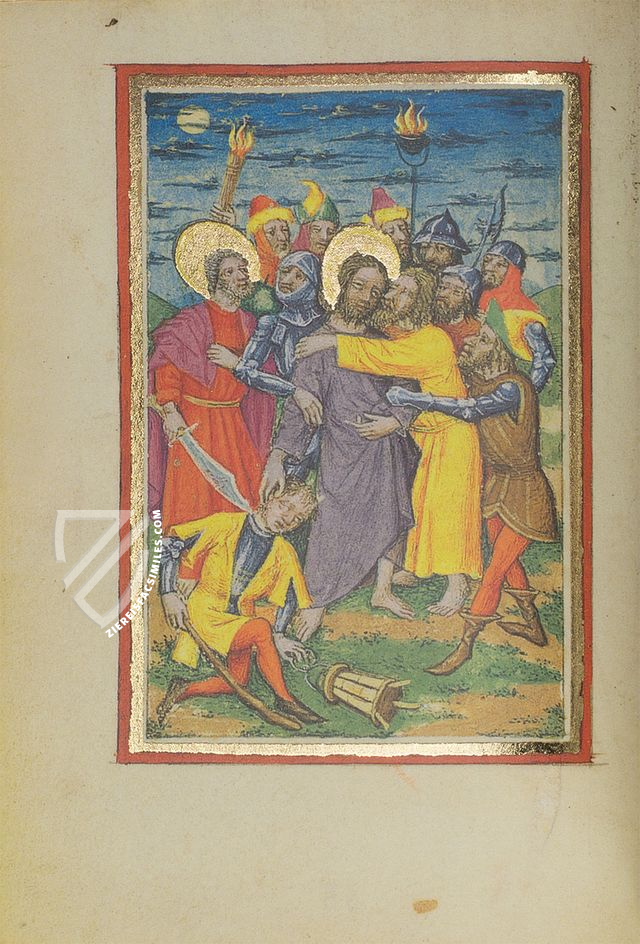 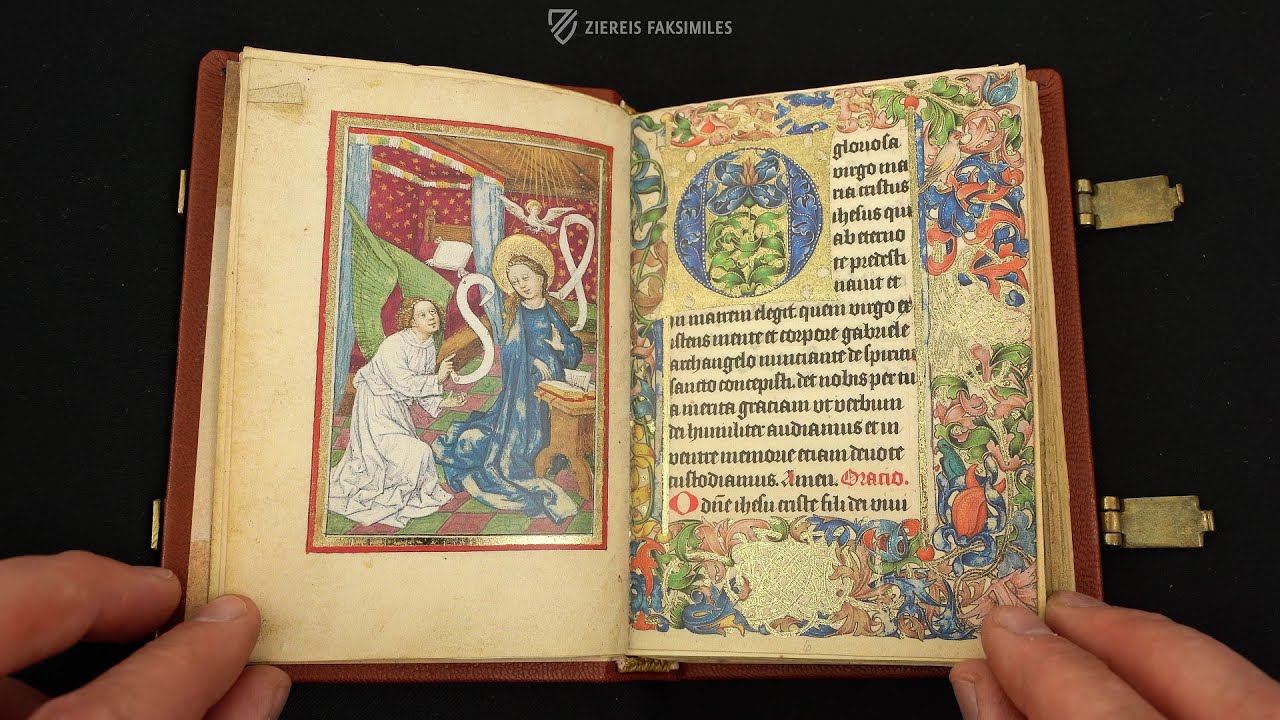 Publisher: Akademische Druck- u. Verlagsanstalt (ADEVA) – Graz, 2003
Limited Edition: 580 copies
Binding: Embossed brown leather binding with two metal clasps and four genuine raised bands. All folios are cut according to the original. Protected with the commentary in a clamshell case.
Commentary: 1 volume by Margarita G. Logutova and James H. Marrow
Languages: English, German
1 volume: This facsimile is not complete. Note: The facsimile reproduces the first portion of the manuscript (Cycle of the Vita Christi), while the second portion of the manuscript is not reproduced. Partial reproduction of the original document as detailed as possible (scope, format, colors). The binding may not correspond to the original or current document binding.
Price Category: €€ (1,000€ - 3,000€)
Edition available
Price: Log in here!
Order / Ask a Question

Akademische Druck- u. Verlagsanstalt (ADEVA) – Graz, 2003
Publisher: Akademische Druck- u. Verlagsanstalt (ADEVA) – Graz, 2003
Limited Edition: 60 copies
Binding: Girdle Book in embossed leather with two metal clasps and a long leather tail ending in a large knot with a metal ring to affix the book to a belt or girdle. All folios are cut according to the original. Protected with the commentary in a clamshell case. Protected with the commentary in a clamshell case.
Commentary: 1 volume (260 pages) by Margarita G. Logutova and James H. Marrow
Languages: English, German
1 volume: This facsimile is not complete. The facsimile reproduces the first portion of the manuscript (Cycle of the life of Christ), while the second portion (not illuminated) of the manuscript is not reproduced. Partial reproduction of the original document as detailed as possible (scope, format, colors). The binding may not correspond to the original or current document binding. The first part of the manuscript (cycle on the Life of Christ) is facsimiled, the second part without miniatures is not.
Price Category: €€ (1,000€ - 3,000€)
Edition available
Price: Log in here!
Order / Ask a Question
You might also be interested in: 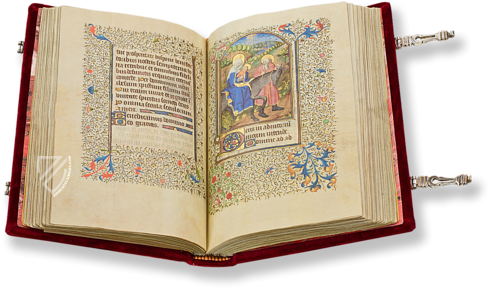 Book of Hours of the Aescolapius
15th century

A magnum opus of the international style: a filigree decorated masterpiece with magnificent miniatures and delicate borders on the threshold of Gothic to Renaissance 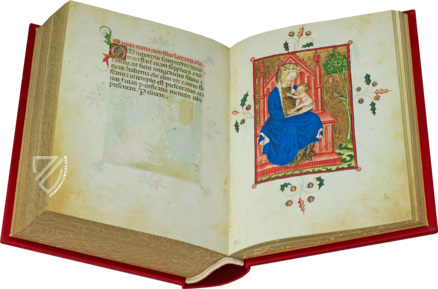