Sometime around 1310 or 1320, a Christian atelier in the region of Lake Constance or the Upper Rhine created a splendid Hebrew prayerbook for a wealthy client. In doing so they created the most magnificent surviving copy of a medieval Machzor, a collection of prayers in Hebrew for the seven special feast days of the Jewish year. 68 richly colored miniatures illuminated with gold adorn the religious text, which is written in various sizes and ink colors. The origins of the two-volume work are obscure because the last few pages of the manuscript, where such information would normally be stored, are missing. Despite this, the highly coveted work in the Leipzig University Library is a precious and beautiful testament to the history of Hebrew manuscript production.

Hebrew manuscripts are counted among the finest examples of the art of illumination and are known for the sophistication of their calligraphy and artwork. This manuscript is a collection of prayers for the seven special feast days of the Jewish religious calendar is regarded as the finest specimen of its kind. It is the Machzor Lipsiae or Leipzig Machzor, a two-volume work comprising 404 leaves measuring 49 x 36 cm. The generous application of gold leaf throughout the work indicates that the wealthy yet anonymous client put few limitations on the production of the precious pair of codices. Finally, it is a beautiful exemplar of the splendor that can be created through the blending of artistic traditions and a testament to the multi-cultural nature of medieval society.

The flyleaves at the back of the manuscript, where codicological information such as the manuscript’s patron and possibly the names of the scribes and artists involved is normally recorded, is unfortunately missing. Judging by the style of the script and artistic furnishings, researchers have surmised that the manuscript originated from southwestern Germany during the early-14th century, most likely the region of Lake Constance or the Upper Rhine during the 1310’s. It appears to have been the product of a Christian workshop, whose artists probably worked in collaboration with a Jewish scribe, who used various sizes and ink colors, and under the supervision of a Rabbi. The first recorded entry by a former owner is dated 1553 and places the manuscript in Worms. The manuscript came to Poland sometime around the turn of the 17th century, where it was rebound, before coming to Thuringia where it was rebound once again about a century later. It was finally purchased by the Leipzig University Library in 1746, where it remains today. 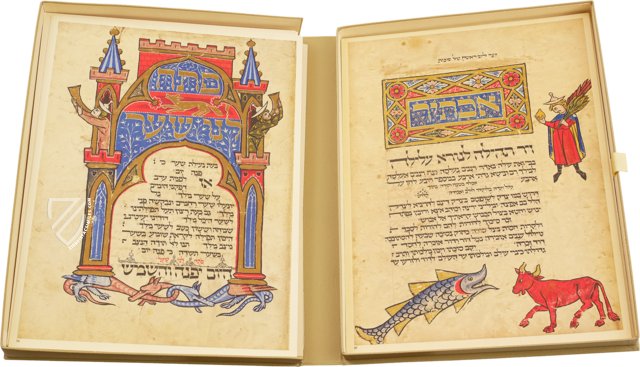 Although it appears at first as though a woman is being attacked by a lion, it is actually Samson with his famous long hair, source of his strength. Seized by the Spirit of the Lord, the Hebrew Hercules has climbed on the lion’s back and is prying the beast’s jaws open before he rips it apart with his bare hands. His green cloak with a diamond-patterned purple and white lining is marvelously designed as though it were flapping while Samson wrestles with the king of the beasts. 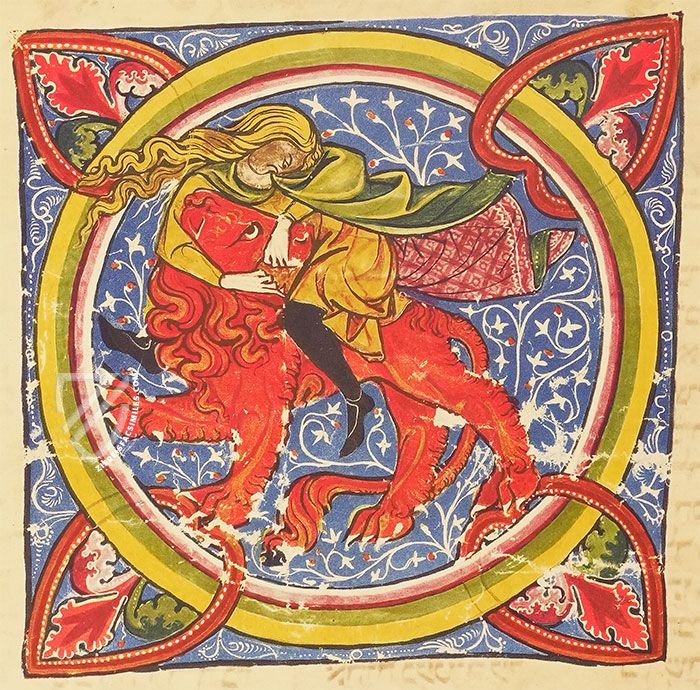 In the Book of Esther, King Ahasuerus, ruler of the Persian Empire, appointed Haman as his viceroy. Mordecai, the cousin of Queen Esther, whom he raised as his own daughter, falls out of favor with Haman after he refuses to bow down before him. Haman then conspires to kill Mordecai and all the Jews in the Persian Empire but is thwarted and hung from the same gallows he had erected for Mordecai.

Haman’s ten sons are later defeated in battle and hung like their father, but in this miniature all eleven of them are depicted hanging from the same tree. Mordecai, in the meantime, has taken Hamman’s place as viceroy and is awarded with a crown of gold, which he is shown wearing with his Jewish hat pulled back as he rides on horseback. 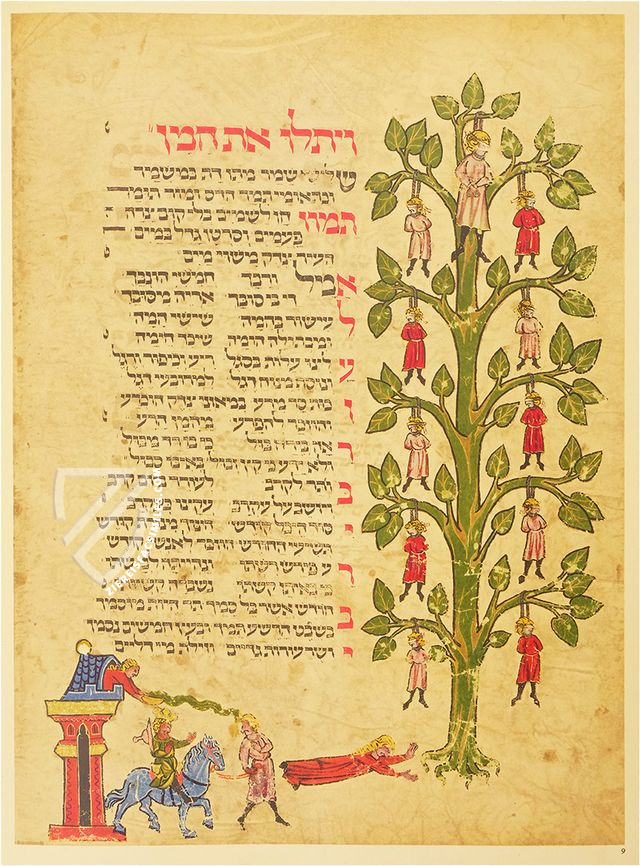 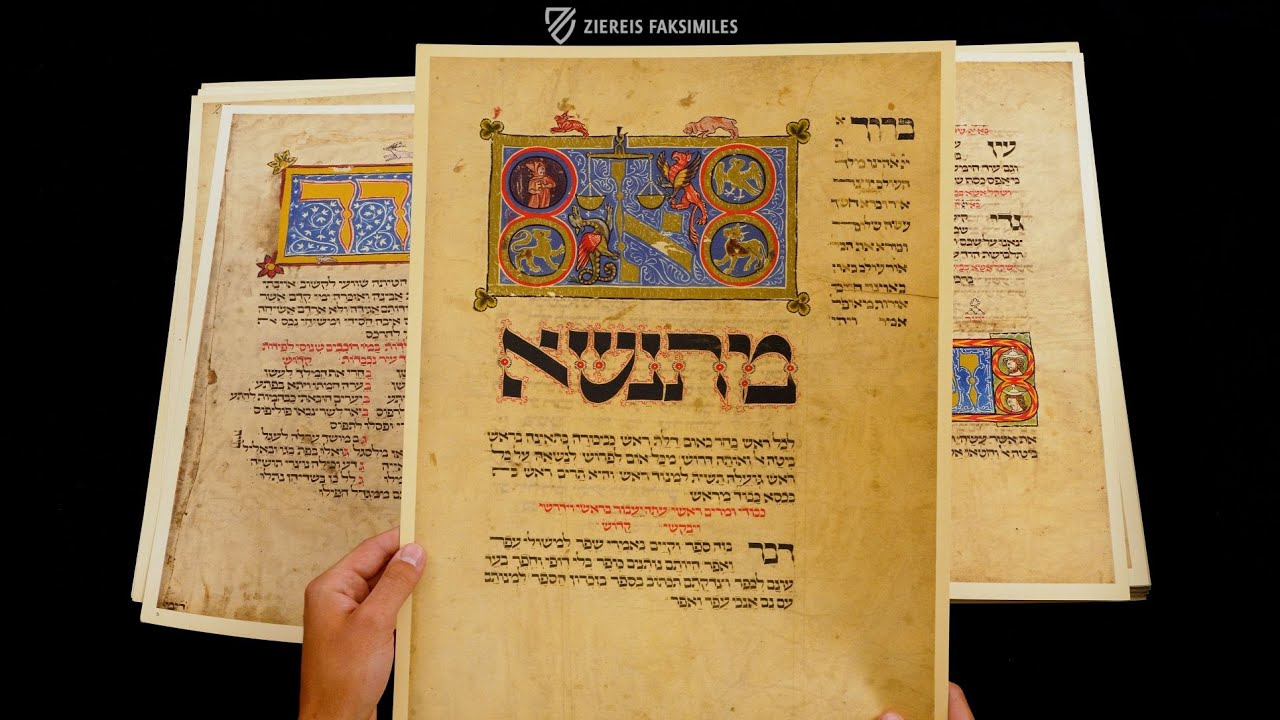 Publisher: Edition Leipzig – Leipzig, 1964
Limited Edition: 500 copies
Binding: Green linen box
Commentary: 1 volume by Elias Katz and Bezalel Narkiss
Language: German
1 volume: This facsimile is not complete. 68 tables of the original manuscript have been reproduced. Reproduction of the entire original document as detailed as possible (scope, format, colors). The binding may not correspond to the original or current document binding.
Price Category: € (under 1,000€)
Edition available
Price: Login here!
Order / Ask a Question
You might also be interested in: 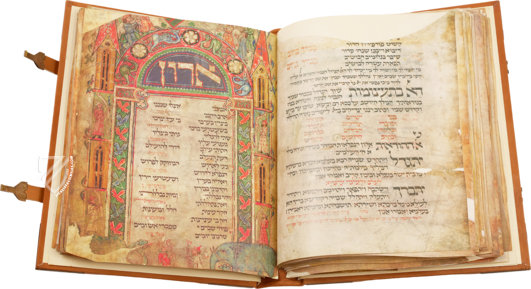 A richly illuminated prayer book in use for over 650 years: the oldest surviving Ashkenazic manuscript and one of the most important sources of Jewish life in the Middle Ages