The Matutinal Book from Scheyern is an important testimonial to late Romanesque illumination in Germany as well as an important contemporary document. It originated in Scheyern Abbey between 1215 and 1225 at the behest of Abbot Conrad I as part of the furnishings for a new church dedicated to the Virgin Mary. The large, richly illuminated codex was primarily used for Matins, the nightly service celebrated by the monastic community. Its pages exhibit evidence of extensive and consistent use including wax or tallow stains. Aside from the Matins text, it contains a table for calculating the date of Easter, a liturgical calendar with various feast and saints’ days, a so-called epilogue, catalog of rulers, the annals of Scheyern Abbey, three poetic legends, notes on donations and the monastery’s income, and a picture cycle. The iconographically and art-historically important miniatures include a depiction of the Woman of the Apocalypse and the Dragon. The codex is thus valuable both as a work of art and as a collection of historical records.

A matutinal book contains the readings recited by a monastic community at the nightly choral prayer known as Matins and as such typically has a large format so that it can be read by numerous people from a distance. The readings are typically preceded by a series of non-liturgical texts that reflect the intellectual and economic interests of the monastery. What distinguishes the Matutinal Book from Scheyern above others are two cycles of colored pen and ink drawings that are both monumental in size – 55 x 39 cm – and exceptional in quality. The leaves show the traces of intensive use, including occasional wax or tallow stains. It was created sometime between 1215, when the new church was consecrated after much of the monastery was destroyed in a fire, and 1225 at the behest of Abbot Conrad I von Luppburg (r. 1206–73). The manuscript was acquired by what is now the Bavarian State Library in Munich in 1803.

A Rare and Splendid Compilation

Aside from the basic text of the Matins, the manuscript contains a computational table for calculating the date of Easter, a calendar of feasts, an epilogue, a catalog of rulers, the annals of Scheyern, three poetic legends, and notes concerning the traditions and income of the monastery. The first of the two picture cycles focuses on the Virgin Mary’s role as the Co-Redemptrix and includes a narrative of Theophilus and the pregnant abbess as well as the famous full-page miniature of the Woman of the Apocalypse and the Dragon. Seven scenes from the life of the Virgin Mary comprise the second picture cycle, which concludes with a miniature of St. Martin and St. Peter opposite a miniature of an enthroned Virgin Mary with the patron of the manuscript lying prostrate, his hands folded in prayer at her feet. Stylistically, the simultaneously lively and monumental pictures of the first cycle are oriented towards contemporary painting from Regensburg-Prüfening, while the pictures of the second cycle are characterized by the so-called Zackenstil, which combines the influence of both the Middle Rhenish and Byzantine traditions. 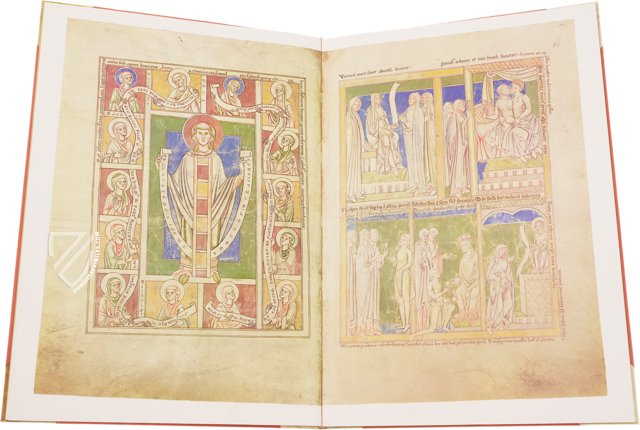 Appearing on a decorative page with two other large initials, this splendid “D” introduces the abbreviated phrase Dominica quarta ante nativitatem domini or “The fourth Sunday before Christmas”. It consists of a shaded brown initial with a green and blue background. Five animals including four dragons in red, blue, and light brown as well as a light brown dog can be found among the flowering tendrils in grey-blue, red-brown, green, and white that wind their way around the initial. Dragons are a popular decorative theme throughout the manuscript and appear in both its initials and miniatures. 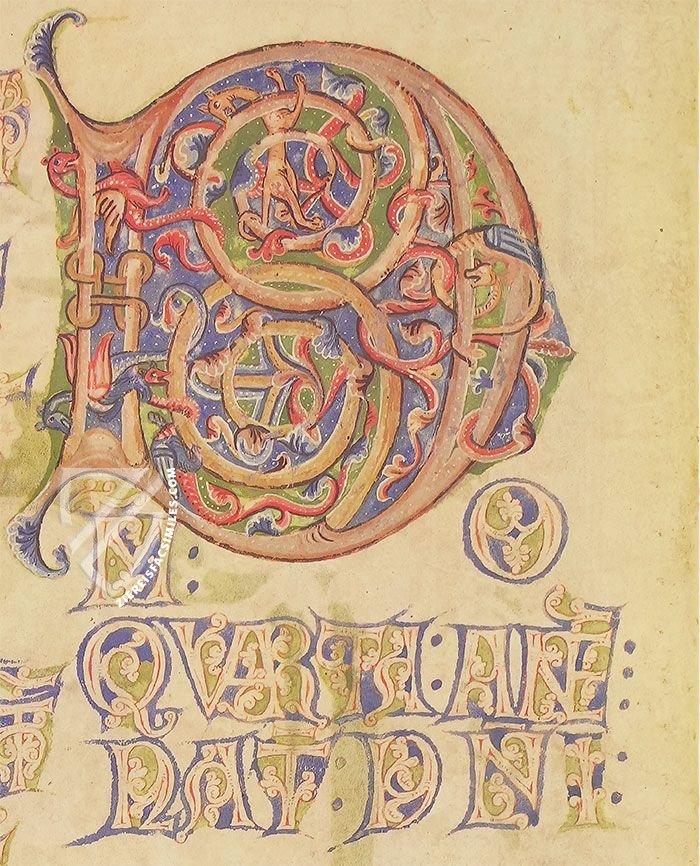 The Woman of the Apocalypse and the Dragon

Revelation 12 in a scene that is reduced to the three essential figures: the Woman of the Apocalypse (representing either the Virgin Mary or God’s people), her son with cross-halo and book (representing Jesus), and the seven-headed dragon who wants to eat him (representing Satan). The dragon spews a river of water from its mouth to sweep her away but the eagle’s wings she has been given allow her to flee.

Elements of the nascent Gothic style appear in this Romanesque miniature including the Woman’s stylized, angular garment fall of folds typical of the zackenstil. Furthermore, while the dragon is presented in a more conventional flat profile, she is depicted in a dynamic “three-quarter view” with one foot stepping out of the frame as she looks back over her shoulder, an artistic pattern indicating escape from a pursuer that goes back to Ancient Greek vases. 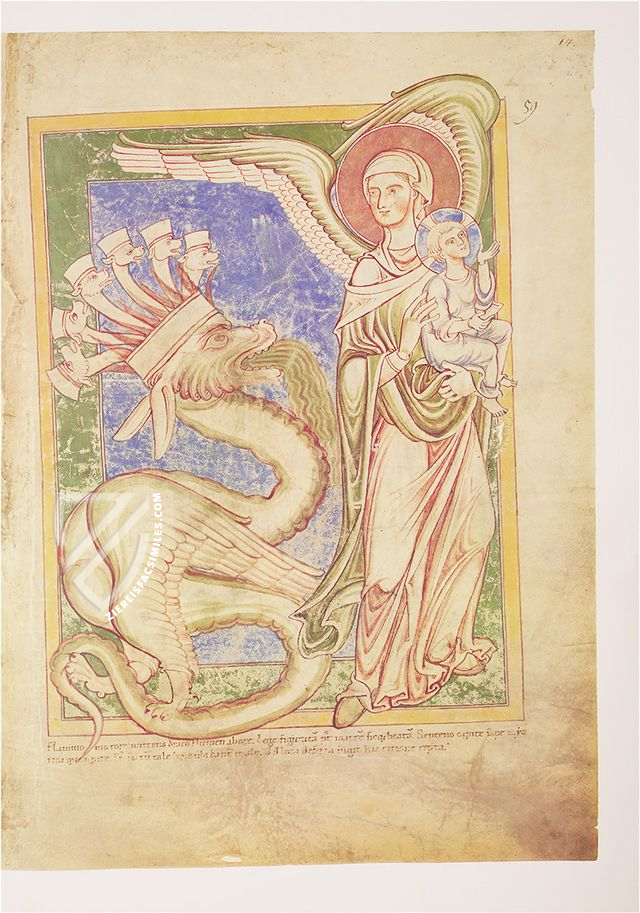 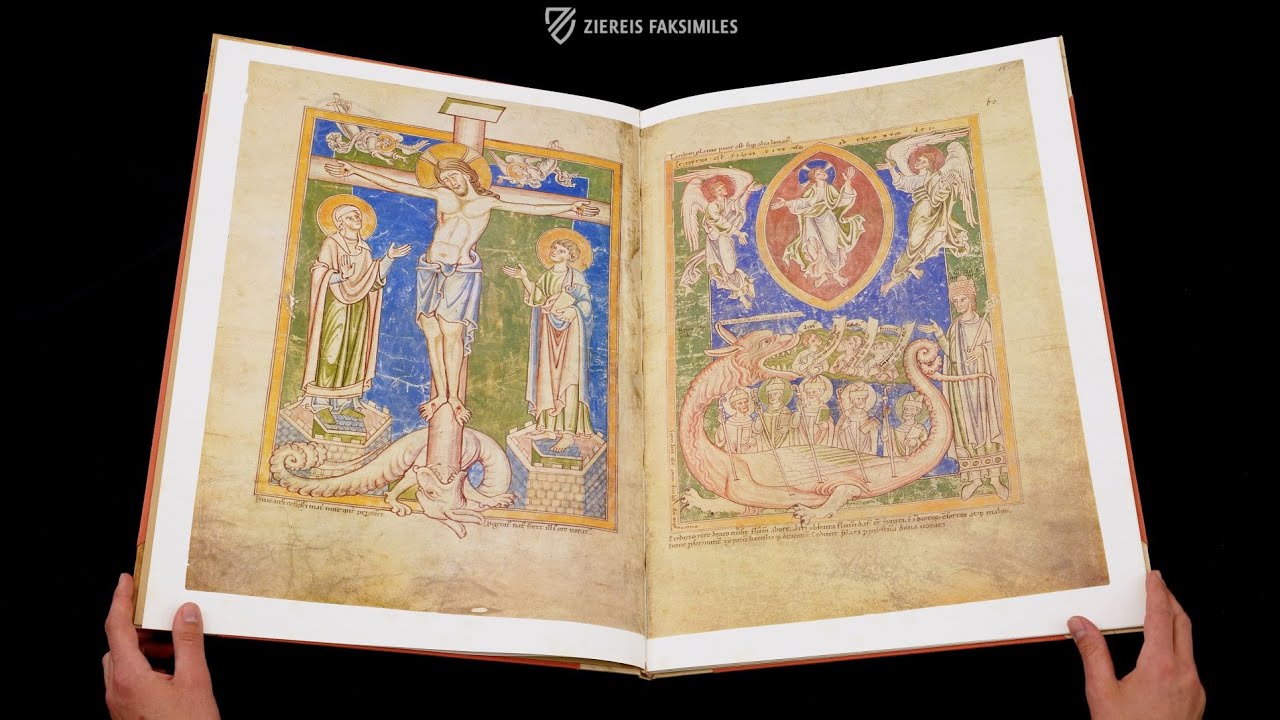