Originating from the 11th century, The Song of Roland is the oldest surviving major work of French literature and is the most famous example of a chanson de geste or “song of heroic deeds”. The narrative centers around the figure Roland, a knight and captain in the service of Charlemagne who died leading the rear guard of the Frankish army when it was ambushed at the Battle of Roncevaux Pass in 778. This embellished retelling of the battle and the events surrounding it would have been performed by troubadours for the entertainment of the knightly class and has survived in numerous illuminated manuscripts. A German poet known as Konrad der Pfaffe (Conrad the Priest) translated the work from French into the Bavarian dialect ca. 1170, likely in Regensburg, and replaced the specifically French topics with broader Christian themes. The manuscript at hand originated from the end of the 12th century and its neatly written text is adorned by 39 half-page miniatures. Although uncolored, they are obviously the work of a skilled hand and very clearly illustrate the events of the text.

The Rolandslied is a 12th century adaptation of the famous heroic epic The Song of Roland created by Konrad der Pfaffe, about whom almost nothing is known. It is a German translation in which Konrad made additions such as passages praising the Bavarian people and their duke as well as frequently mentioning Bavarian names and locations. Although the Crusader spirit is already evident in the original, it is even clearer in Konrad’s version, which also replaces the theme of Frankish patriotism with a more pronounced religious tone. Charlemagne is depicted as the ideal Christian ruler and Roland is the archetype of a Christian warrior, the miles Christi, who happily accepts martyrdom rather than dishonor himself. The oldest and most authoritative manuscript of the work was destroyed in a fire during the Siege of Strasbourg in 1870 and the Heidelberg manuscript, which is presented here, is the most comprehensive and important of the surviving copies and fragments. In it, the 9,094 verses of the text, which is written in rhymed couplets, is illustrated by 39 uncolored but masterful half-page miniatures.

The two primary themes of the Rolandslied are the Christian faith and selfless heroism, which are embodied in the medieval Christian concept of what it is to be a hero: courageous, brave, and possessing exceptional strength and skill on the battlefield as well as Christian virtues. Furthermore, Roland acts in the full knowledge that he has been chosen for martyrdom in the service of God, another behavior typical of heroes that is rooted in the ancient Germanic belief in destiny. However, in Konrad’s version, Charlemagne is the true protagonist and as such his text is sometimes referred to as the “Karlslied”. The Emperor is strong, pious, and fearless in battle against the heathens, but does not seek fame for himself and his connections to God are obvious, e.g. the twelve paladins correlate to the Twelve Apostles, Genelun is a Judas figure, and Charlemagne is a wise judge like Solomon. This divine connection underpins his imperial legacy and Charlemagne is presented as the successor of Christ.

Commissioned by Which Duke Henry?

The author identifies himself in the epilogue and writes that he first translated from French into Latin before creating the German text and states that the French original was acquired for him by “Duke Henry”, who commissioned the work. Most scholars identify the patron as Henry the Lion (ca. 1130–95) and claim that the text was written shortly before the manuscript was created in the 1170’s. However, others argue that the original date of composition was ca. 1331, the year in which Henry the Proud (ca. 1108–39) travelled to Paris, where he could have acquired a manuscript of the original French version. Based upon the style of the miniatures and the frequent mention of Bavarian names and places, it is generally agreed that the manuscript originated from Regensburg, an important center for the production of manuscripts. 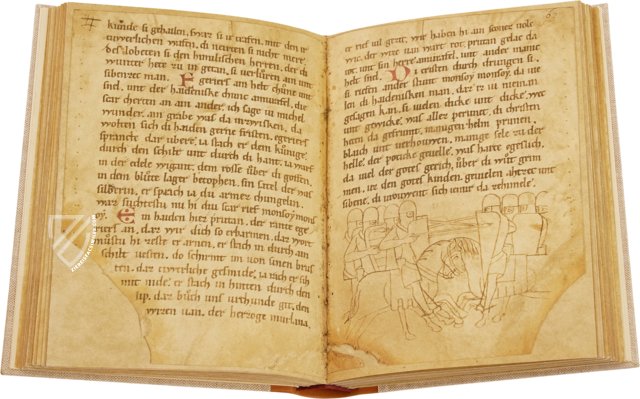 The Envoys of King Marsilie before Emperor Charlemagne

Holding a fleur-de-lys scepter in his left hand and stroking his long beard with his right, Charlemagne is crowned and seated on a throne bench among a crowd of envoys from Marsilie, King of the Saracens. Wise old Blanscandiz, the only other figure with a long beard, kneels before Charlemagne along with the rest of the diplomatic mission and gestures as though pleading with him. While all the envoys are focused on Charlemagne, his gaze is fixed on the beholder with a concerned look on his face, almost as if he were asking for our advice on the situation at hand. 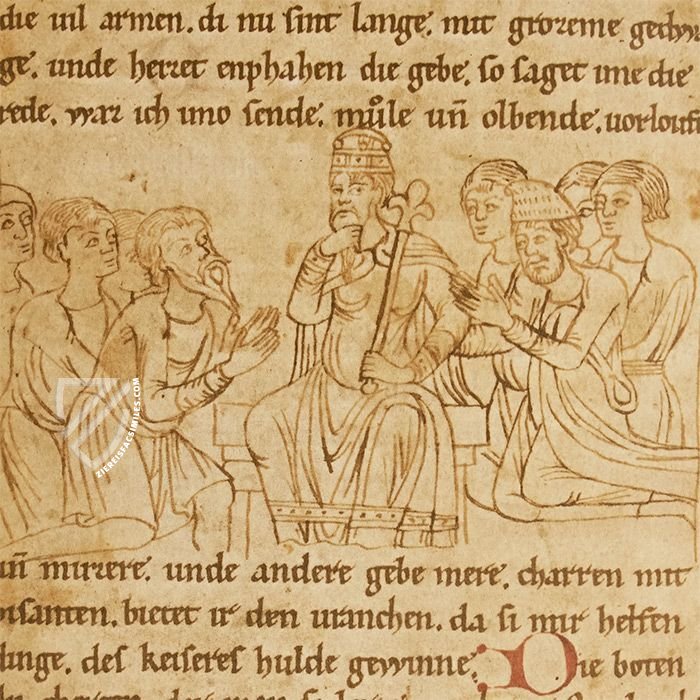 Genelun Confers with the Pagans under an Olive Tree

Konrad der Pfaffe’s version of the Song of Roland differs from the original in that its religious tone is even more pronounced and a fervent Crusader spirit has replaced Frankish patriotism: Charlemagne is the model Christian ruler, Roland the peerless Christian knight who sacrifices himself like a martyr, and the traitor Ganelon (spelled here Genelun) betrays not only his country but his faith.

Paranoid that he himself will be betrayed, Roland’s stepfather Genelun (wearing a hat) enters into a conspiracy with the pagan Saracens to ambush the Franks, killing Roland and bringing down Charlemagne and his empire. Although the olive tree is simply drawn like a lollipop, the artist has given the strongly gesturing figures individualized and expressive faces while dressing them in garments with a natural fall of folds. 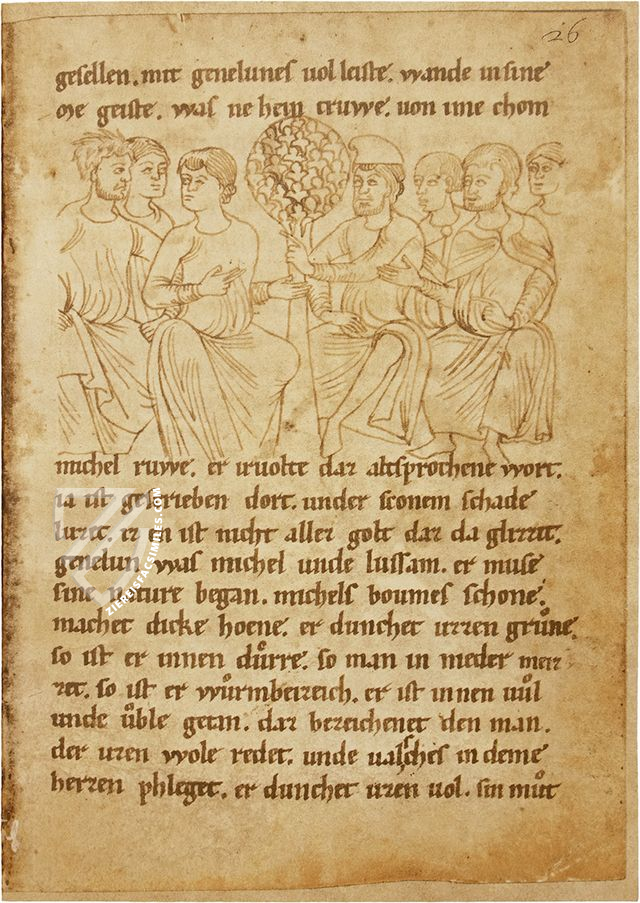 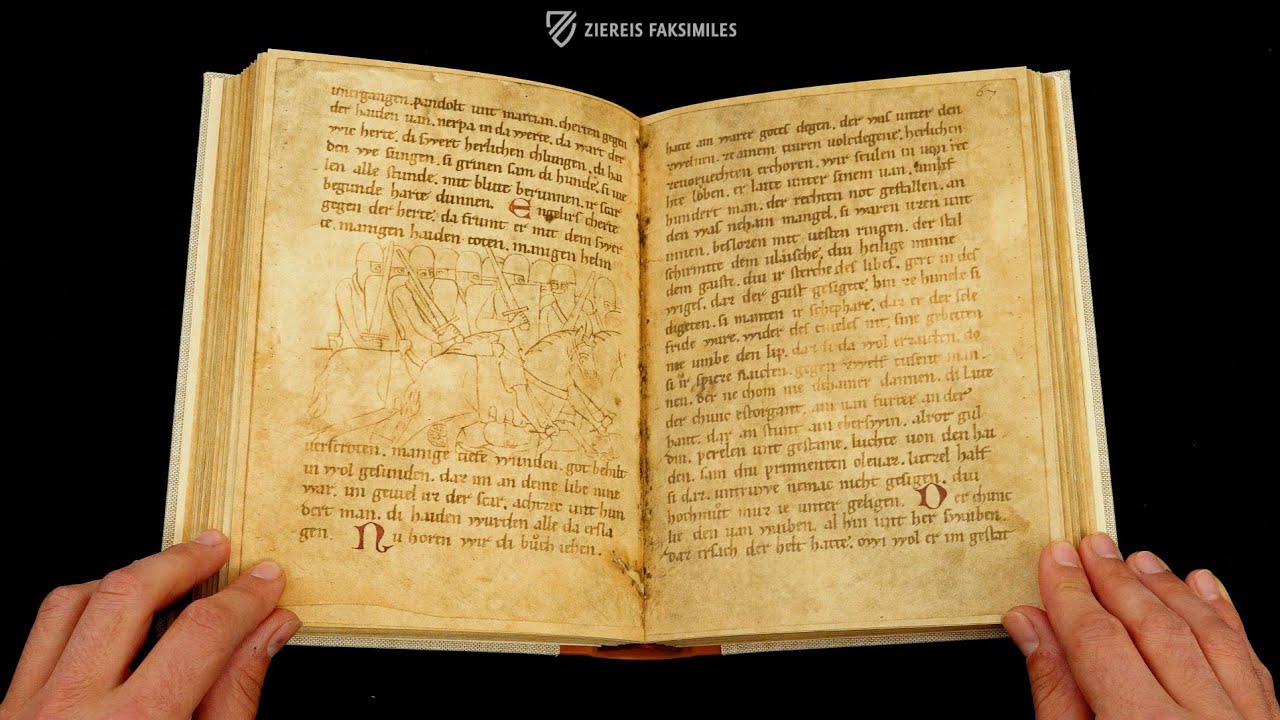 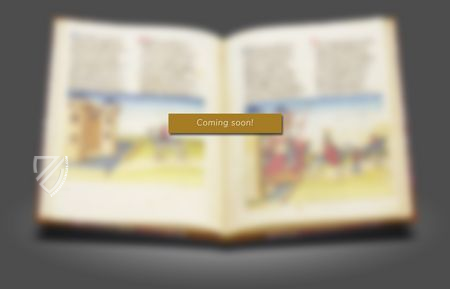 Originally furnished with 1,300 colorful miniatures: the famous and touching love story of Margrave Willehalm and the Saracen princess Arabel in the oldest surviving Willehalm Codex