Blockbooks are short books, usually of a religious nature, printed with woodcuts in Europe during the second half of the 15th century. Created by printing two pages on one folio that was then folded in half and sewn together with other folios to create a simple binding, their purpose was to serve as a cheap alternative to typeset books, which were still very expensive. They are extremely rare today with most existing only as fragments, but this Speculum Humanae Salvationis or “Mirror of Human Salvation” created in the Netherlands ca. 1468–79 has survived as a complete codex with 58 woodcuts illustrating the text written in two columns, always in the upper third of the page.
Despite the quality of the woodcuts’ design, which set biblical events in the 15th century and thus give a glimpse of contemporary day-to-day life, the master who designed them remains unknown. Brown ink was used for the illustrations while black ink was used for the text printed in a Gothic script using movable type except for some initials in red ink. Ludolph of Saxony has been presented by researchers as a possible author of the work, but this has never been proven with certainty. 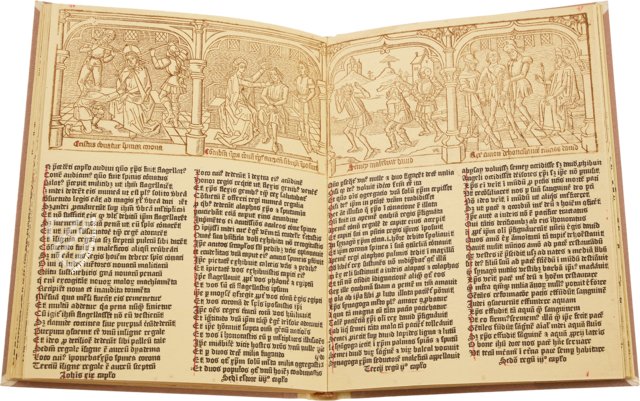 While most depictions of this famous underdog story from the Book of Samuel depicts Goliath towering over David as he is about to unleash his sling, this woodcut shows the immediate aftermath. The heavily armored Goliath lies on the ground next to a spiked club while still gripping a sword. His ugly visage has exaggerated features in comparison to the boyish face of David, which is partially obscured by a blot of ink. Despite still being a humble shepherd in the story, David is crowned and dressed like a late-15th century prince in a doublet and tights. 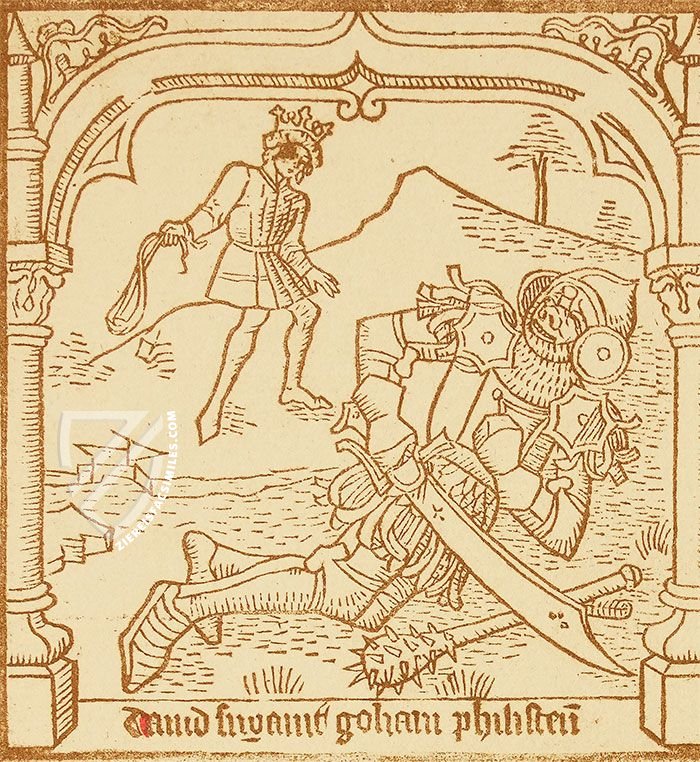 Baptism of Christ and the Molten Sea

On the left there is a typical scene showing John the Baptist pouring water over Jesus’ head as he stands in the River Jordan, which is witnessed by an angel dressed in flowing robes with an angular fall of folds influenced by the Zackenstil and a dove representing the Holy Spirit. It is juxtaposed on the right by a large basin resting on the backs of oxen – the so-called Molten Sea from the Temple of Solomon.

The Molten Sea is described in 1 King and 2 Chronicles as a brass or bronze basin five cubits in height, ten cubits in diameter and thirty cubits in circumference that was used by the temple priests for ablution or ritual washing. It was placed on the backs twelve oxen facing outward, three in each cardinal direction, which represented the Hebrew zodiac and referenced the Twelve Tribes of Israel. 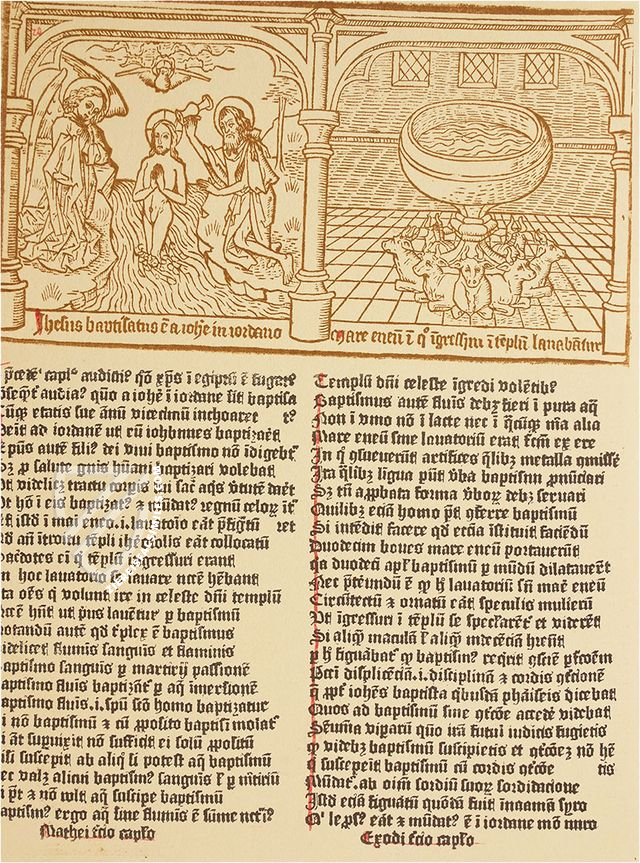