This splendid double facsimile edition consists of a pair of manuscripts that give the modern reader a detailed look into the lives of the late medieval aristocracy, which are presented in a handsome wine-red leather box. The Crowning Ceremonial of Emperor Charles V gives insights into the public and ceremonial aspects of the lives of the nobility. Created in Italy in 1530, it documents the imperial coronation of Charles V by Pope Clement VII. The Chess Book of Jacobus de Cessolis uses the game of chess as an allegory for feudalism and the medieval society of estates and explains how the higher estates are always dependent on the lower estates but not necessarily vice versa. Originally written ca. 1330, this German manuscript was completed in 1458. Both manuscripts are bound in leather and generously furnished with artful miniatures, decorative initials, and other décor.

This pair of codices represent two of the finest and most characteristic specimens from the twilight of illuminated manuscript production, which would soon be crowded out by Gutenberg’s recent invention of the printing press with moveable type. One is a splendid specimen of the late German Gothic style that offers an inside look into the customs and duties of all levels of medieval society, the other magnificently illuminates the 1530 coronation of Charles V as Holy Roman Emperor in the lavish style of the Italian Renaissance. Together, these two manuscripts represent both the final and greatest flowering of European book art while also offering a precious glimpse of late medieval history and society.

Jacobus de Cessolis (ca. 1250 – ca. 1322) was a Dominican friar who wrote the most popular moralizing chess treatise of the Middle Ages sometime during the second half of the 13th century. His treatise uses the game of chess as an allegory for society and stresses that the king and nobles are dependent on the peasantry. The role of working people of the lower orders was emphasized and specific professions like smiths, merchants, and doctors are named. Thus, not only did the people have obligations to the nobility and clergy, but also the other way around. The societally critical work did not lose its popularity over the following centuries and became one of the most widely disseminated works of the Middle Ages and there are over 100 extant manuscripts, including this beautiful specimen made in Germany in 1458. 15 miniatures depicting various members of society and 29 colorful initials with gold leaf backgrounds adorn the Latin text.

When Charles V (1500–58) was crowned Holy Roman Emperor on the 24th of February 1530, his 30th birthday, he was already the King of Spain, Germany, and Italy as well as Archduke of Austria, Duke of Burgundy, and Lord of the Netherlands as well as his overseas Empire in the Americas. As such, he came closer than any other person to attain a universal monarchy since the fall of the Roman Empire and styled himself as a new Charlemagne. He was crowned in Bologna by Pope Clement VII (1478–1534), the last pontiff to officially crown an emperor. The moment is depicted in a masterful miniature in the richly and creatively designed manuscript, which was commissioned as a gift from Charles to Clement. This gift was not only meant to commemorate the event, but also to celebrate the new alliance between erstwhile enemies: only three years earlier, Imperial troops sacked Rome and imprisoned the Pope in the Castel Sant'Angelo for six months and forced him to ransom his life for 400,000 ducati as well as some territorial concessions. 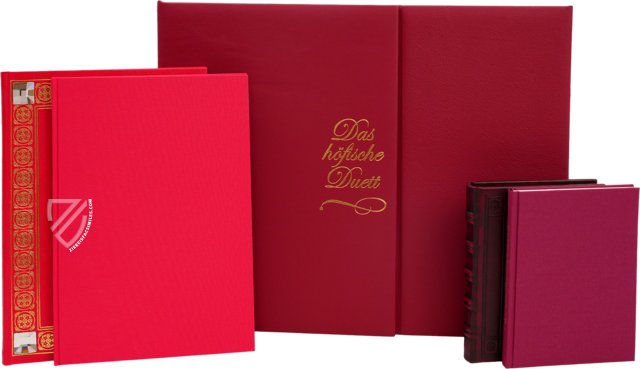