Emperor Maximilian I was a ruler who embodied both the end of the Middle Ages and the beginning of the early modern era in Europe at the turn of the 16th century. He enjoyed great successes in both war and diplomacy and was also one of the greatest art patrons of the Renaissance. Maximilian also employed the greatest artists of his time to promote himself and his rule in a manner that had never been seen before. The "Miniature Triumphal Procession" for Emperor Maximilian I was created by Albrecht Altdorfer and his workshop in Regensburg between the years 1512 and 1515. This series of 50 large-scale pen and ink drawings on vellum, worked in the style of miniature painting, later served as a model for the monumental series of woodcut prints of Emperor Maximilian's Triumphal Procession, which was published in 1526.

The most important and extensive of the works commissioned by Emperor Maximilian I (1459–1519) is his Triumphal Procession, which does not depict an actual event but rather an imaginary parade in honor of the Emperor, who conceived of this work himself in 1512. The project was completed in 1515 by the German Renaissance master Albrecht Altdorfer (ca. 1480–1538). This unique and magnificent work is inspired by the festive processions of victorious emperors in Rome and their adaptations in the Italian Renaissance but appears as a contemporary pageant with depictions of the most important people and events from the emperor's life. Furthermore, it is filled with detailed depictions of clothing including the extravagantly dressed landsknechts as well as armor, weapons, canons, horses, wagons, and other equipment from the early 16th century.
The order of the leaves and the reading direction run from right to left, against the direction of the procession. Thus, the participants of the triumphal procession move towards the viewer, as it were, many carrying banners that depict important events. In contrast to the woodcut version of the Triumphal Procession executed from 1516 to 1526, the magnificent miniatures painted on precious parchment were undoubtedly intended as an exclusive ceremonial edition for the Emperor. Originally purchased for 12,000 Gulden, it is one of the greatest treasures of the Albertina’s collections.

The original 109-part cycle, painted on parchment, stretched over a length of more than 100 meters when assembled as a frieze of images, but only leaves 49 to 109 and the author's leaf placed at the end with a length of almost 54 meters are preserved in the Albertina. Nothing is known about the fate and whereabouts of the lost first part of the miniatures, but their content can be deduced from Maximilian's surviving written concept from 1512 as well as by two later copies, also executed on parchment.
According to these, the parade was led by the “herald of triumph” riding on a griffin followed by figures of court life such as mounted pipers and drummers, falconers, hunters of ibex, stags, pigs, and bears, the court offices (gift giver, cook, barber, tailor, and cobbler), musicians, and court jesters on richly decorated floats, as well as mummers, fencers with various weapons, and tournament riders. The depiction of Maximilian's marriage to Mary of Burgundy was located approximately in the center of the procession and is at the beginning of the sheets preserved today in the Albertina.

A Splendid Survey of Maximilian’s Life

Themes include important moments from Maximilian's life and those of his ancestors*** such as various dynastic marriages, battles, and wars. His riches are strikingly displayed on treasure carts and his **modern artillery is proudly presented. The Emperor himself is enthroned with his family on a richly decorated triumphal chariot. In accordance with the social order of rank, he is followed by princes, knights, and landsknechts until it reaches the supply train at the end of the procession. Aside from the background of the baggage train, the protagonists of the triumphal procession move before a neutral background of unpainted parchment, which allows the viewer to concentrate on the depictions removed from space and time that aim to honor Maximilian's life as well as his eternal memory. The materials used are of the greatest preciousness: only the finest calf parchment was chosen and the most expensive color pigments as well as silver and gold were used for the painting.

Formerly attributed to the workshop of Jörg Kölderer (ca. 1465/70–1540), who served as Maximilian’s court painter in Tyrol from 1494 to 1518, it is now known that although Kölderer began work on some first drafts, this manuscript is the work of Albrecht Altdorfer, who led a team of artists in his Regensburg workshop. Some are remembered only by their Notnamen such as the Master of the Historia, who created the four epic battle scenes. Among the triumphal miniatures, one can clearly distinguish a group of works including the Treasure of Devotion, Treasure of Use, and the Conquered Cities and Castles by the painter who created the oversized sheet with the artillery: the Master of the Artillery.
Apart from Altdorfer, Georg Lemberger (ca. 1490/1500 – ca.1540/45) made the most extensive contribution to the preserved "Triumph Miniatures". Lemberger distinguishes himself by a self-confident, powerfully wielded, and lively pen. The triumphal wagons carrying members of the imperial family and other that are at the heart of the manuscript are not from Altdorfer as one would suspect but rather from an “unknown prayerbook painter” of tremendous skill whose contributions are unmistakably similar to a prayerbook made for Emperor Maximilian. The hands of several other artists and apprentices are evident in the work, they were mostly tasked with depicting the procession of various nobles, knights, trumpeters, heralds, flagbearers, and servants.

The Marriage of Philip I and Juana of Castile

Carried by two splendidly dressed riders, this banner allegorically depicts the 1496 wedding that laid the foundations for a unified Spain under Habsburg rule. The emperor stands to the left and looks on as the newlyweds hold up their combined coat of arms. Despite the strong military theme of this series of woodcuts, this is the most accurate depiction of the true power of Habsburg foreign policy – marriage alliances: Bella gerant aliī, tū fēlix Austria nūbe/ Nam quae Mars aliīs, dat tibi regna Venus or "Let others wage war, but thou, O happy Austria, marry; for those kingdoms which Mars gives to others, Venus gives to thee." 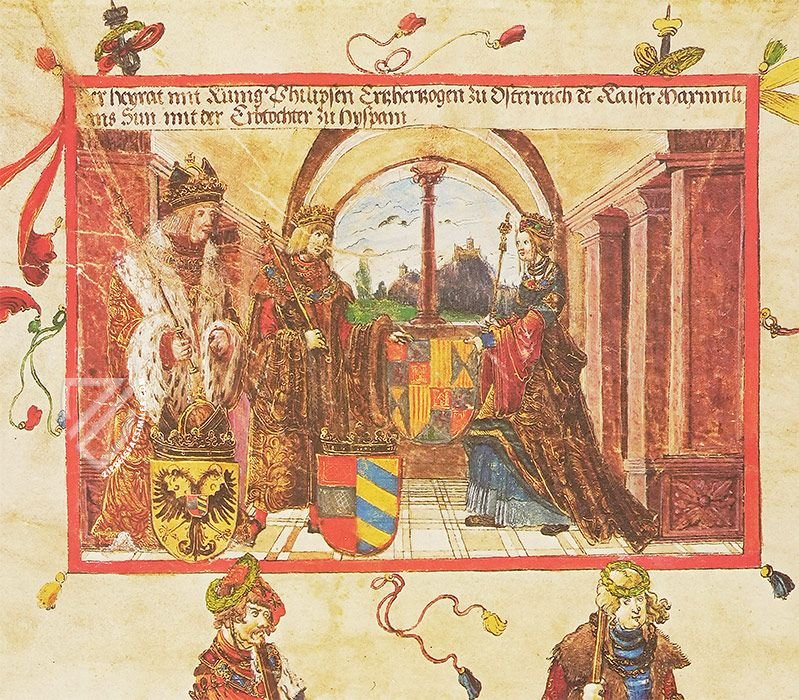 This magnificent triumphal chariot is drawn by a team of white horses and accompanied by richly dressed landsknechts armed with halberds, one of whom stops to admire it. Resting on four wooden wheels wrapped in steel for added strength, it is essentially a massive arch-shaped panel painting framed by two columns with armored figures holding flags. Two griffins hold up the imperial coat of arms with the double-headed eagle.

The panel painting shows various cities and castles as islands floating in a sea of glimmering gold and symbolically depicts the impressive conquests of Maximilian and his landsknechts rather than an actual archipelago. Although unlabeled, the castles and cityscape are depicted in great detail and would have been recognizable to the proud landsknecht standing before them, but many of their medieval skylines would be changed a century later by the Thirty Years’ War. 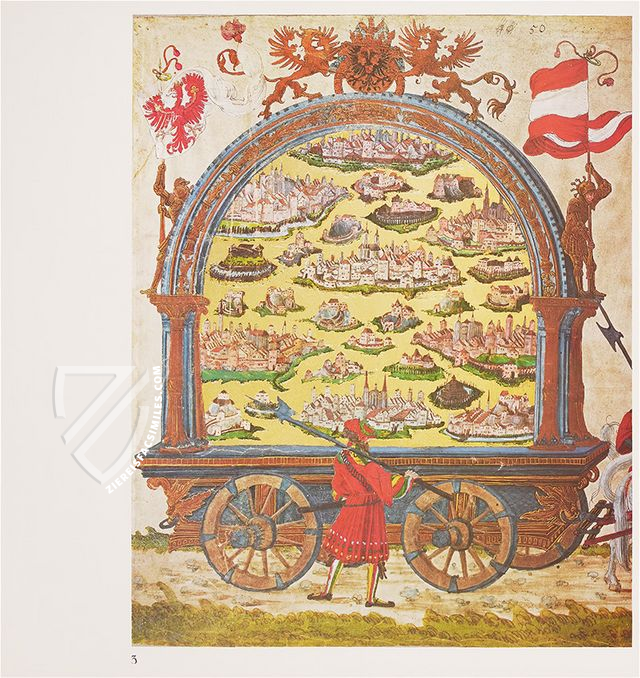