Vesconte Maggiolo, also spelled Maiollo and Maiolo, was an Italian cartographer who was active in his native Genoa as well as Naples during the first half of the 16th century. He produced numerous portolan charts, nautical atlases, and other works of cartography that have survived to the present day and is credited with being the first to record the name of the Amazon River in 1548. In 1512, only a year after moving to Naples, Maggiolo created a set of four parchment maps, which are stored today in the Biblioteca Palatina in Parma, Italy. This nautical atlas is a wonderful specimen of Italian cartography and illumination from the Age of Exploration.

Vesconte Maggiolo – The Nautical Atlas of 1512

Maggiolo’s famous Nautical Atlas of 1512 consists of four masterful pieces of cartography that are also fine specimens of Italian Renaissance art. They are painted with a beautiful palette of primary colors that are illuminated with gold. First is a detailed map of Africa and its northern, western, and southern coasts as well as the neighboring regions of the Mediterranean and Europe. The second map shows the Black Sea and Asia Minor as well as Greece and the Eastern Mediterranean while the third map shows the Central and Western Mediterranean, the Peloponnese, and Crete. Finally, the fourth map shows the North Sea and Atlantic coasts of Western Europe, the British Isles, and North Africa.

The Life of a Master Cartographer

Vesconte Maggiolo (1478 – after 1549) was born into the Republic of Genoa, one of the great maritime powers of medieval Italy and an important center of banking during his lifetime. Not only was he born into a family of mapmakers, but one that was granted a monopoly by the Republic for over 150 years to ensure the consistent quality of these important navigational tools. As such, he was destined to be one of the greatest cartographers of the 16th century. He moved to Naples in 1511, presumably to expand the family business to the city, which was enjoying an economic and cultural revival under the rule of the Crown of Aragon.
While in Naples, he produced inter alia two atlases, three nautical charts, and a nautical planisphere before he was recalled to Genoa by Doge Ottaviano Fregoso in 1518. Maggiolo was made Magister cartarum pro navigando a position that came with a salary of 100 lire per year. In 1521, the Genoese Senate confirmed his office and salary for life and in 1529 he was granted the right to pass it onto his son. Maggiolo’s last known work was published in 1549, a year after he became the first person to use the term Rio de Amaxones to refer to the mightiest river in South America on a map. 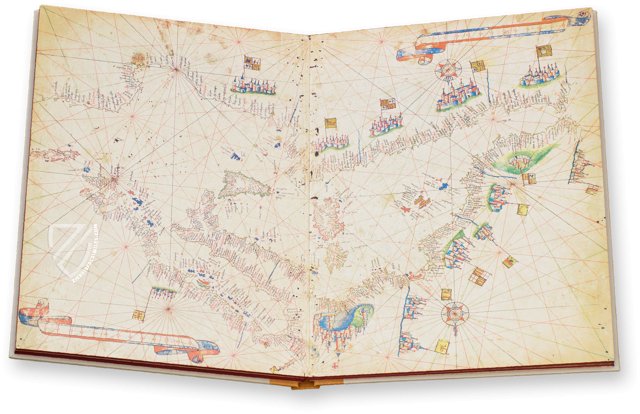 Here we see the two great maritime powers of the Middle Ages: Genoa is in the foreground and is depicted with its port in a fairly accurate manner while Venice is only recognizable by St. Mark’s Campanile, which towers over the city. The two republics also competed with one another for titles with Venice being known as La Serenissima or “the Most Serene Republic of Venice” while Genoa claimed various titles including la Superba, la Dominante, and la Repubblica dei magnifici or “the Republic of the Magnificents”. 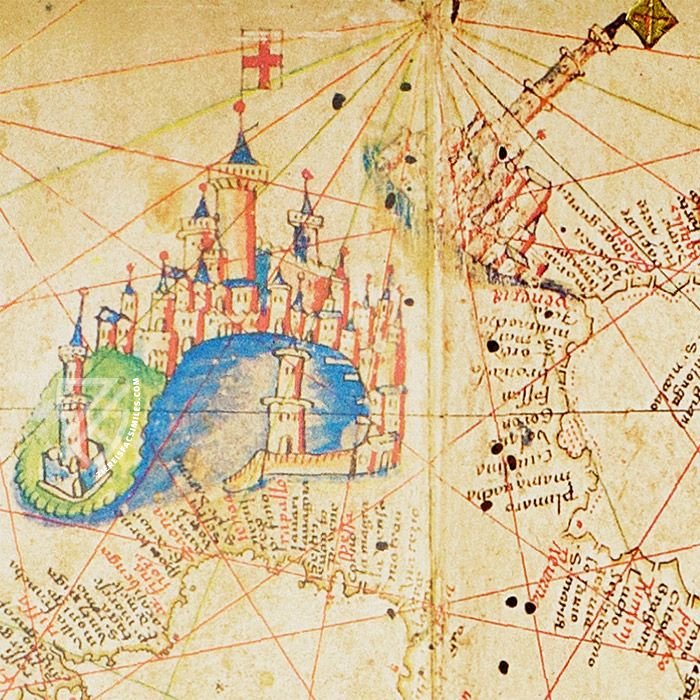 Africa, Europe, and the Middle East

Large maps like these were designed to be viewed from all sides meaning that although the labels in the upper part of this map appear upside down to us, they would be legible for someone standing next to the upper edge of the map just as the place names in Sub-Saharan Africa including “Mons Lune”, which is depicted as the origin of the Nile River and possible location of the Garden of Eden, which is represented by a snake climbing up a tree inside of a castle.

Various rulers are depicted either enthroned or seated within elaborately colored tents. Aside from Genoa and Venice, other important trade cities are depicted along the coasts of the Red Sea, which is colored literally, as well as five more cites along the Danube River. The ancient cities of Aleppo, Damascus, and Jerusalem are depicted in the Holy Land in the East while newly discovered Atlantic Islands such as the Canaries and Azores are drawn in red and blue in the West. 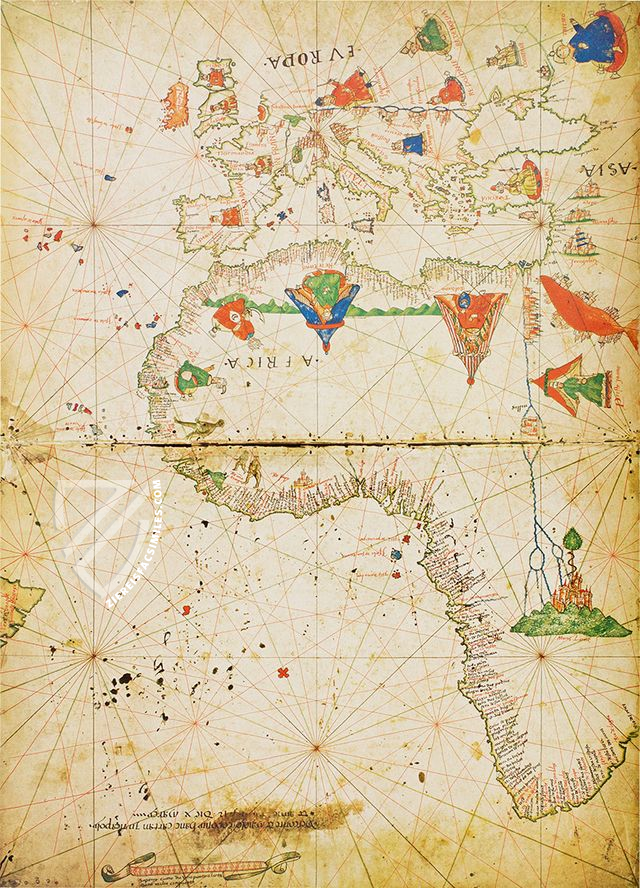 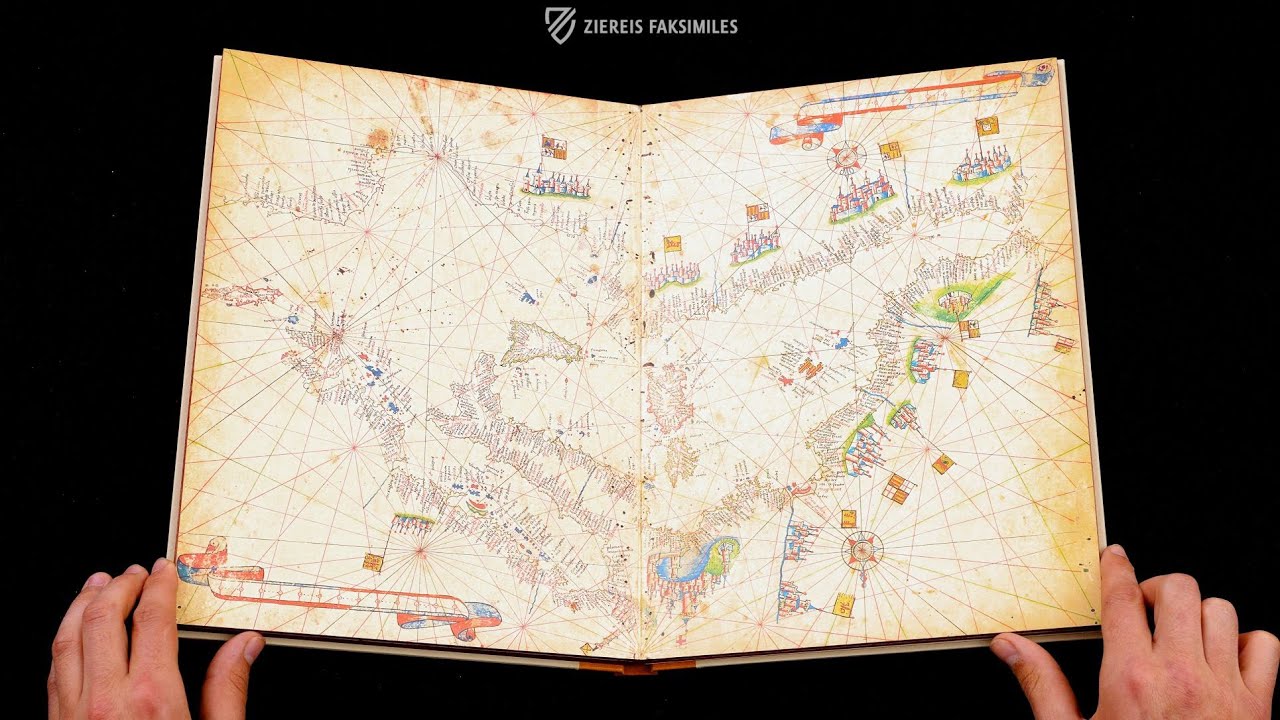