The Apocalypse of 1313 was made in Paris by the illuminator Colin Chadelves. The work contains a thrilling picture cycle of 162 large, miniatures adorned with gold. The images boast a unique mixture of various styles. They make this Apocalypse one of the most significant illuminated manuscripts of the early 14th century.

Numerous manuscripts about The Book of Revelation arose in the Middle Ages. This famous story from the New Testament is also called an Apocalypse. The Apocalypse of 1313 is an especially exciting version of that story. This manuscript is comprised of a picture cycle totaling 162 miniatures, which probably represent the most important and original illustration cycle of all the illuminated Apocalypses of the Middle Ages. It is the most famous work by the French illuminator Colin Chadelve.

The outstanding manuscript was made by Colin Chadelve in 1313, probably produced at the behest of the French King Philipp the Fair. An Apocalypse is mentioned in the will of his daughter Isabelle of France, which is probably the manuscript from 1313. The valuable depictions, which were endowed with opulent gold, indicate a wealthy benefactor at the very least.

A Unique Mix of Styles

The work’s various stylistic influences are particularly worthy of note, which characterize the illuminator. Chadelve’s miniatures sometimes focus on the pictures of the Liber Floridus, a medieval encyclopedia from Flanders. The style of illuminated Beatus manuscripts also influenced the French artist in his work. The painter combined traditional iconographies with his own creative ideas and in doing so created a truly unique work.

The images of the Apocalypse of 1313 show an astounding variety of details. The large, sometimes full-page miniatures in luminous colors were effectively contrasted with golden elements. The beholder is given a glimpse of the punishments that await the sinners in hell after the Day of Judgement. Chadelve depicts the most terrible torture methods. He shows sinners being skinned, cut in two, and dipped in boiling oil. The dramatic imagination of the artists was boundless. The fantastical depictions in thrilling colors and embellished with gold make the images of the Apocalypse unforgettable. The valuable original of the manuscript is found today in the French National Library in Paris. 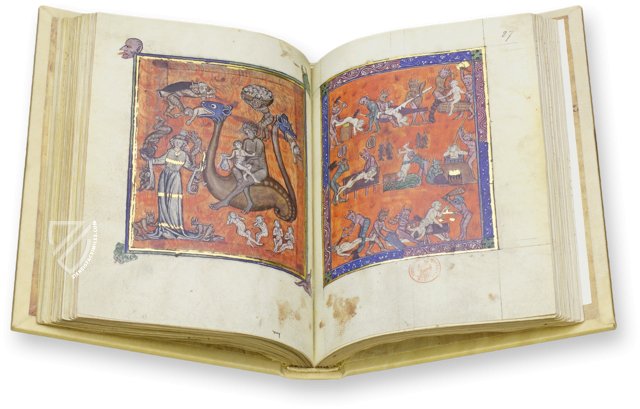 In Rev. 17:4, the Whore of Babylon is described as being “arrayed in purple and scarlet, and adorned with gold and precious stones and pearls, having in her hand a golden cup full of abominations and the filthiness of her fornication.” Her fall is depicted here as she is devoured by the Hellmouth, stripped of her crown, and tormented by demons. Babylon was interpreted in the Middle Ages as being the spiritual enemy of Jerusalem with the former representing the love of worldly things and the latter the love of God. 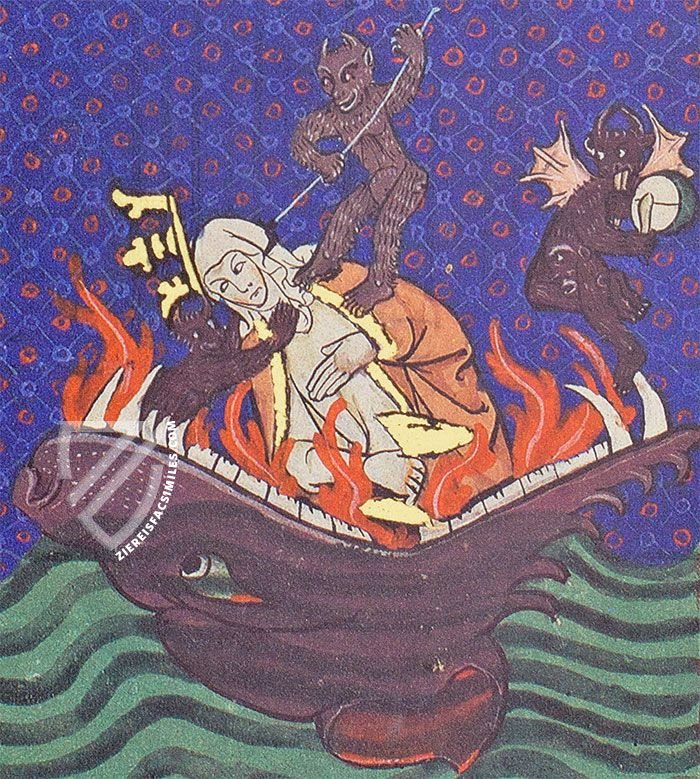 War has broken out in heaven and the Archangel Michael leads a host of angels against the forces of the dragon who has deceived the world – Satan. The seven-headed dragon is painted bright red, standing out from the dark blue background of the lower half of the miniature. Stripped of their fair hues, the fallen angels are presented as beastly, furry, horned demons armed with clubs, some with macabre smiles.

Triumphing over them from above against a burnished gold background, the angels are white with grim faces, golden halos, and wings of pink and green. Although outnumbered, they are armed with swords and axes. With his characteristic cross-lance, the Archangel Michael pierces one of the mouths of the dragon, who is prostrate on his back. 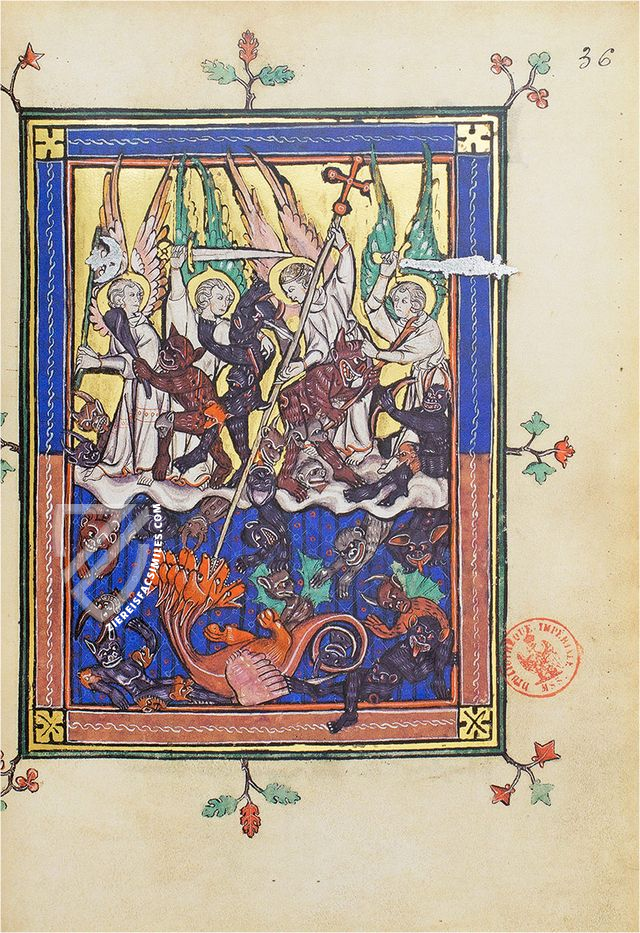