Originating ca. 1460 in either the Netherlands or the German region of the Rhine, the Estense Apocalypse is counted among the earliest block books. Also called xylographica, block books were a cheap alternative to Gutenberg-style typeset printing created using woodcuts with both text and illustrations carved into them. They are also counted among the rarest of all books because they were only produced for short period from the 1450’s to the 1470’s. Like most block books, it is a short codex consisting of less than fifty leaves and was created for a popular, lay audience. It is an image-forward work featuring 96 hand-colored woodcuts with critical sections of the text from the Book of Revelation imbedded in each scene, often as banderoles.

The Book of Revelation, also known as the Apocalypse, is the last book of the New Testament. The biblical text is a coherent allegorical composition full of significant symbols, which has shaped and fascinated the Christian community for centuries. The present edition of the Apocalypse is found today in the Biblioteca Estense Universitaria in Italy. The precious work contains 48 full-page woodcuts, all of which were colored by hand. What we have here is one of the most beautiful and precious editions worldwide of the popular biblical text.

The Book of Revelation was originally recorded in the form of a letter, which was written from the perspective of the John the Apostle for the seven Christian congregations of Asia Minor. The document has been subdivided into 22 chapters since the Middle Ages. The biblical text relates the terrifying visions of the end of the world and the Day of Judgement, which appeared to John the Apostle in a dream. The text was recorded in very vivid language and draws on various symbolic color schemes, representations of animals, and combinations of numbers. The code ‘666’, which encodes the name of the Beast, is still a generally known satanic motif. The Estense Apocalypse was made in the style of the Biblia Pauparum. It consists of 96 pictures, which each fill a whole page. The depictions are sometimes comprised of great scenes, sometimes they are divided into two scenes. The Latin text of the book was imbedded into miniatures in various ways, so that it creates the impression of a modern comic book for the reader.

An Harbinger of the Reformation?

What is special about the Estense Apocalypse is clearly its gorgeous illustrations. The outlines of the depictions were completed in outstanding woodcuts. Each individual page was hand-colored in a vivid, splendid variety of colors. The thrilling depictions were in stark contrast to the typical depictions of saints and church dignitaries at that time. No grace, no respect is shown to the clergy, they will be punished for their sins and outrages on the Earth’s last day – just like the rest of humanity. This special characteristic of the illustrations allows them to be interpreted as a harbinger of the Reformation, which convulsed all of Europe shortly after the genesis of the work and completely revolutionized the essence of the church. 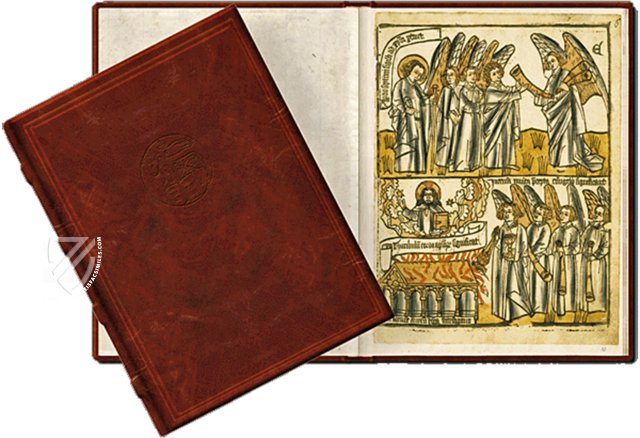 Il Bulino, edizioni d'arte – Modena, 1999
Publisher: Il Bulino, edizioni d'arte – Modena, 1999
Limited Edition: 999 copies
Binding: Full leather in the style of the current binding of the original
Commentary: 1 volume (93 pages) by Ernesto Milano
Language: Italian
1 volume: Exact reproduction of the original document (extent, color and size) Reproduction of the entire original document as detailed as possible (scope, format, colors). The binding may not correspond to the original or current document binding.
Price Category: € (under 1,000€)
Edition available
Price: Log in here!
Order / Ask a Question
You might also be interested in: 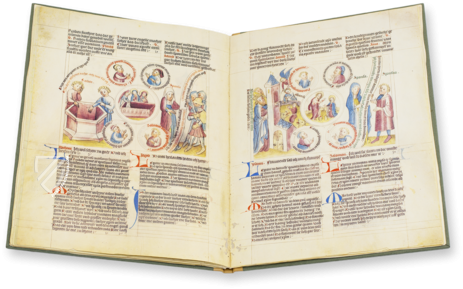 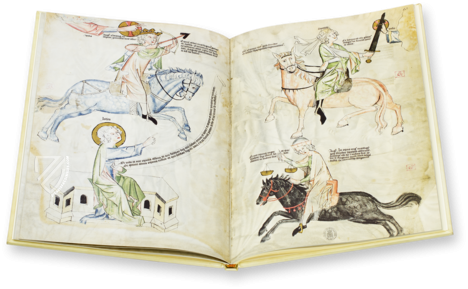 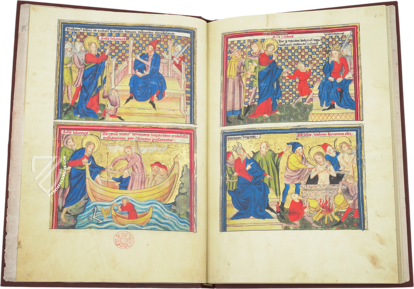 Life of John and the Apocalypse
Netherlands – Ca. 1400

Dominated by impressive, finely executed images: over 90 full- and half-page miniatures of John and his apocalyptic vision 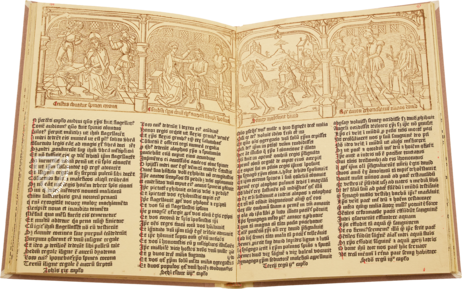 An extremely rare glimpse into the book world of the 15th century: a "mirror of human salvation" in a block book with 58 masterful woodcuts that was a more affordable alternative to Gutenberg's movable type

The Antichrist and the Fifteen Signs before Doomsday
Southern Germany – ca. 1450

Ubiquitous in Western medieval literature and still very influential for the works of William Shakespeare: the last fortnight of this world