The Bamberg Psalter originated ca. 1230 in either Bamberg or Regensburg. Its binding is counted among the most beautiful and impressive specimens produced by the illumination of the Middle Ages: golden miniatures on the front and rear covers shine through transparent horn plates. The 150 Psalms are introduced by masterful full-page miniatures and decorative initials on gold backgrounds that are representative of the transition from Romanesque to Gothic illumination. All of this makes the Bamberg Psalter one of the most impressive works of illumination from the High Middle Ages.

Anyone lucky enough to behold the Bamberg Psalter is already enchanted by the high-medieval masterpiece before they even get a chance to look inside it. This is due to the cover of the splendid psalter. Created around 1230 – at the time of the construction of the Bamberg Cathedral – it is a masterpiece of craftsmanship and art history almost unique to the art of bookbinding. You have to look twice before you realize what you see there: gleaming gold miniatures shining through the front and back covers! This literally translucent appearance is made possible by the fact that the book covers are painted with magnificent miniatures that are placed under translucent horn plates, which are in turn secured by decorated silver frames. Thus, on the front cover we see Christ in the mandorla, which is cruciform of four medallions covered with the evangelist symbols. In the upper corners we also find two cherubs, in the lower two archangels: Michael with the dragon and Gabriel with lily scepter and vessel. On the back cover, it is the Madonna and Child pictured in the mandorla. Here, too, the Mandorla comprise four cruciform medallions (the four female cardinal figures) and again in the corners Aaron with a blossoming staff, Isaiah with the rice, Ezekiel in front of a locked tower gate, and Solomon pointing to a spring. Thus, even this touching horn binding gives each viewer a sight that will remain unforgotten, increasing one’s astonishment to admiration.

Golden Splendor for a Psalter

This admiration continues when you open the Psalter. This is undoubtedly because one has a manuscript in front of him that counts among the highlights of European art. The 150 psalms are initiated by 24 gold-framed calendar medallions with the labors of the months and the signs of the zodiac, as they were found in almost all books of hours in later centuries. This prelude is followed by 5 full-page gold miniatures of the most serene beauty that breathe the grandeur of the Middle Ages, and an already stunning, elaborately-populated ornamental initial – naturally on a gold background as well. All in all, there are 15 full-page miniatures on gold backgrounds, 8 full-page golden ornamental initial pages, and 3 full-page historicized ornamental initials on the 210 parchment pages next to the calendar medallions. In addition, the 150 Psalms, the actual content of each psalter, are each initiated by a multi-line gold initial.

Two Masters in the Transition from Romanesque to Gothic

Looking closely at the magnificent miniatures, one notes that interesting features can be found therein, which illustrate the transition from Romanesque to Gothic. On the other hand, it becomes apparent that two extraordinarily talented illuminators must have worked on the Bamberg Psalter. The younger of the two is connected to northern French illumination and is indicative of the nascent Zackenstil or jagged style that would initiate the Gothic style in Germany. The main master, on the other hand, offers figures of tall and slender proportions. Their faces show strongly rounded chins and large, almond-shaped eyes. The design of the garment folds is characteristic: unlike his younger colleague, the main master wraps each of his characters in robes with round folds that have excess material and are thus heavy, but at the same time incredibly soft. An extremely important testimony to the transformational period of these two formative art epochs!

Mysterious Creation at the Behest of a Lady?

The emergence of the Bamberg Psalter was long puzzled over. Psalters in general were often made on behalf of and for women. Such a valuable luxury psalter of this level of mastery certainly allows for only a very influential and wealthy patron. The art historical classification and the fact that the 1245 murder of Count Gebhard von Hirschberg was appended to the introductory calendar for the 5th of June, encouraged the assumption of its period of origin around the year 1230. Bamberg is naturally named as a place of origin, where the manuscript was first documented in the Bamberg Cathedral sacristy in 1430, and then in the Bamberg Cathedral treasury in 1743. The design of the boldly decorated gold initials suggests, however, that the psalter originated in Regensburg and only then – when the Bamberg Cathedral was adequately furnished – found its way into the diocese founded by Emperor Henry II. In the course of Secularization in 1802/1803, the masterpiece then came to the current State Library Bamberg, where it is kept under the shelf mark Msc. Bibl. 48. Next to the Bamberg Apocalypse, it belongs among the most important manuscripts of the German Middle Ages. 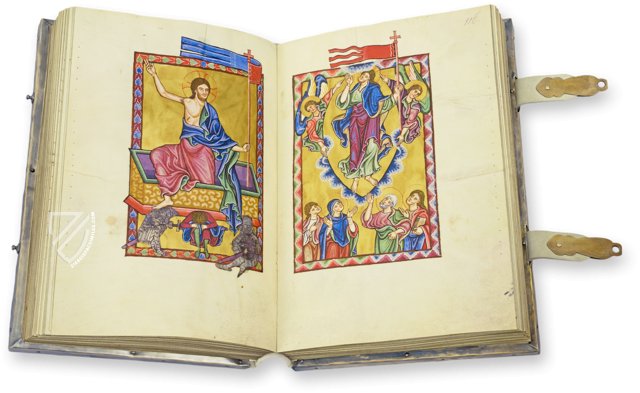 This extraordinary Romanesque miniature is presented before a splendid gold background: the Virgin Mary presents Jesus to Simeon, the high priest of the temple, at the altar. It is reduced to just the three most important figures along with two doves, which are a common feature in this scene. It is gorgeously colored with detailed, naturalistic figures, e.g. the baby Jesus appears to extend his hand as though he were a king toward Simeon, who bows to kiss it. 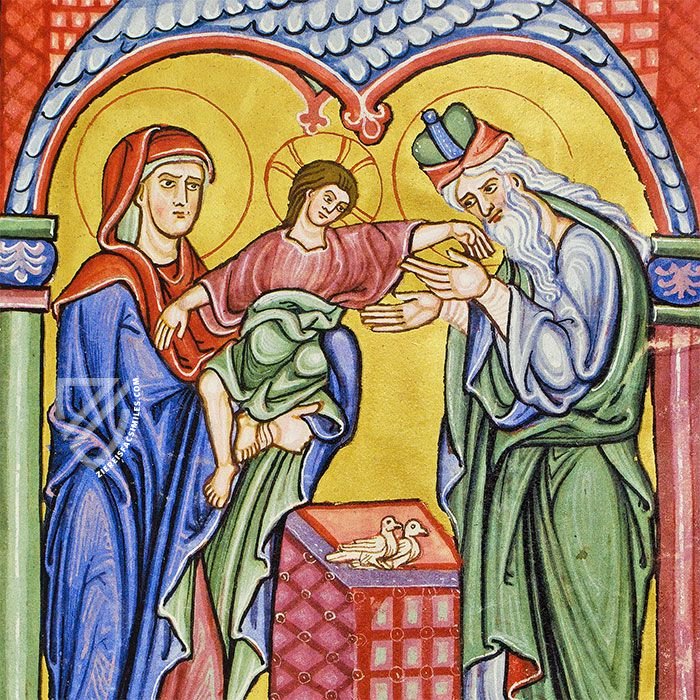 This Psalm poses a question: “Why do you glory in malice, you who are mighty in iniquity?” The struggle of the weak and downtrodden overcoming the wicked and powerful is one of the central ideas of the Judeo-Christian tradition and served as a source of inspiration for medieval Europeans enduring a hard and uncertain life.

The most famous underdog in the Western tradition is depicted here in a masterful historiated “Q” initial, which is a fine specimen of the German Romanesque in its latest and most refined period. The imposing Goliath is shown dressed in a chainmail hauberk and an open-faced helmet with a golden nose guard and band. As he prepares to strike with his great spear, David is shown launching a stone with his sling. 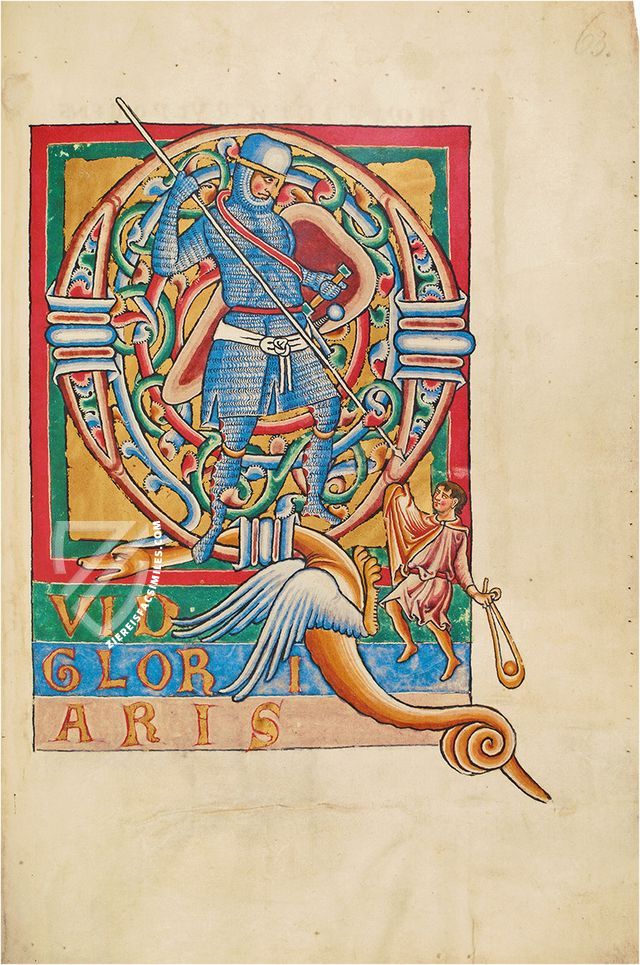 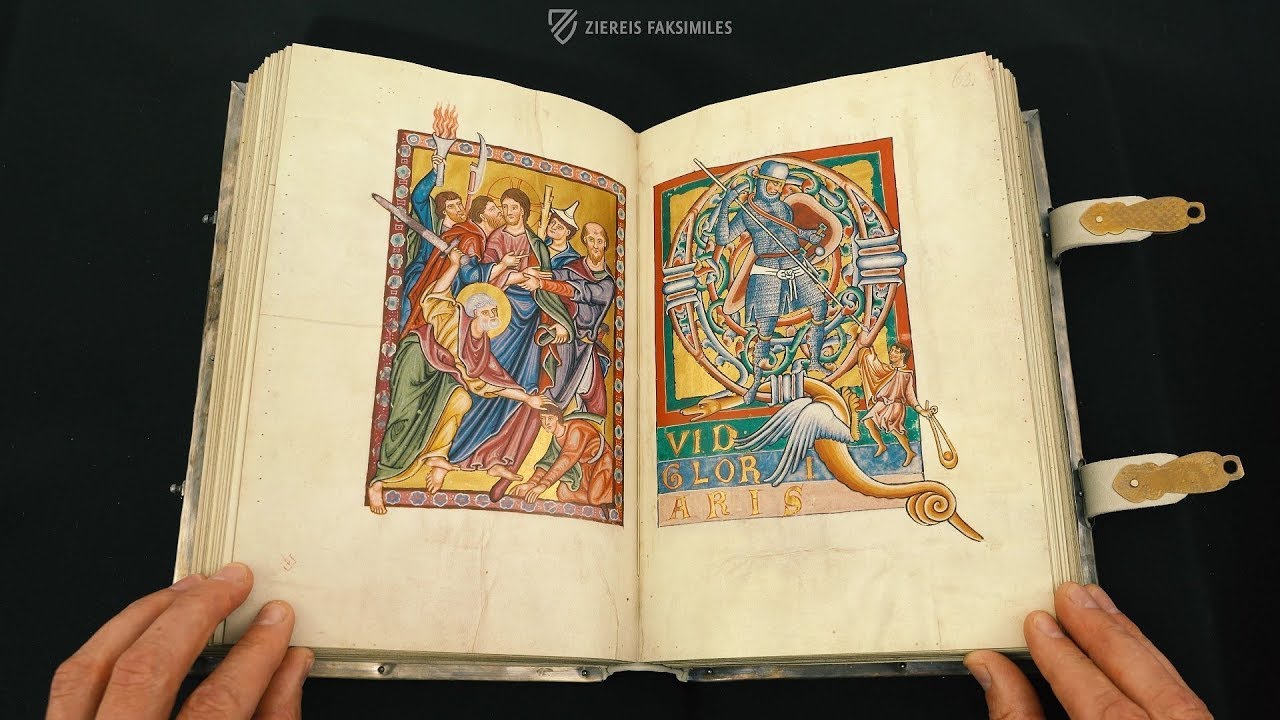 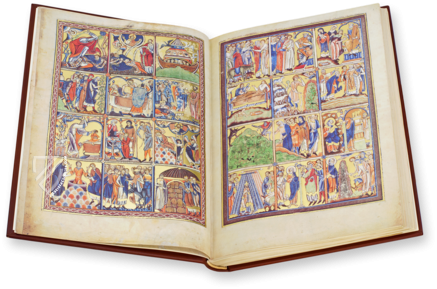 Started in Canterbury, completed 150 years later in Spain: a large and magnificently illuminated Psalter in the transition from Romanesque to Gothic to the new Italian style 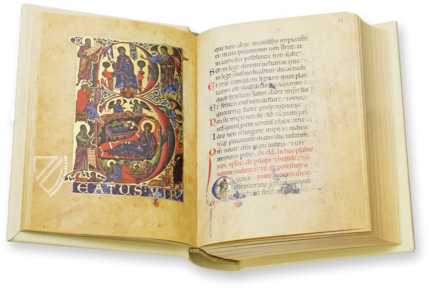