The Banderia Prutenorum is an illuminated manuscript that was made by the Polish intellectuals Jan Długosz and Stanisław Durink in the year 1448. It is probably the most important historical source on the 1410 Battle of Grunwald and documents one of the most important events in the history of Europe.

In the year 1448, the Polish scholar Jan Długosz created an illuminated manuscript, which plays an important role in the national history of Poland. His Banderia Prutenorum is one of the most important contemporary sources for the Battle of Grunwald in the year 1410, and depicted the banners of the Teutonic Order captured there in what is also called the Battle of Tannenberg. The military action, in which the host of the Teutonic Order was decisively defeated by the host of the Kingdom of Poland-Lithuania, is considered today to be the largest battle of the Middle Ages. In the Banderia Prutenorum, 51 banners of the Teutonic Order are portrayed, which were captured in battle by Polish forces. The manuscript was made in order to forever preserve the memory of this historic victory for the citizens of the Polish nation.

The Battle of Grunwald

On July 15th, 1410, the Battle of Grunwald was fought in the Prussian lands of the Order not far from the localities of Tannenberg and Grünfeld. This battle was a highpoint of the military conflict between the Teutonic Order of the Kingdom of Poland-Lithuania, who fought over the premier position of power in central Europe for centuries. The decisive defeat of the armed forces of the Teutonic Order marked the beginning of the decline of the Order’s dominion in Prussia as well as the rise of Poland-Lithuania as a great European power. The confrontation is considered to be one of the greatest battles between medieval knightly hosts and has been part of the national legend of Poland and Lithuania since the 19th century. The Banderia Prutenorum is also important for the history of Germany. 180 years before the battle, the Knights Teuton conquered the territory of the Prussians, a Baltic tribe, which the geographical designation of Prussia stems from. In the Banderia Prutenorum, the knights themselves were identified as Prussians. The manuscript documents the history of the realm of Prussia and the period predating what we know as Germany.

The unique manuscript of the Banderia Prutenorum originated from an excellent collaboration between the Polish intellectuals Jan Długosz and Stanisław Durink. The diplomat, geographer, and historian Długosz composed the text of the work, while the illuminator Durink took charge of the illustration for the historic manuscript. The manuscript originated in three working steps. In the first step, the true to original portrayals of the captured banners were drawn and furnished with commentaries, which indicated the great men who once owned them. In the second step, the author Długosz composed short descriptions of the illustrations, which is due to the historian’s incredibly exact research. In the third step, the manuscript was finalized, expanded, corrected, and finally received its name. The scholarly and historical work that underlies this work makes it required reading for the historically interested. 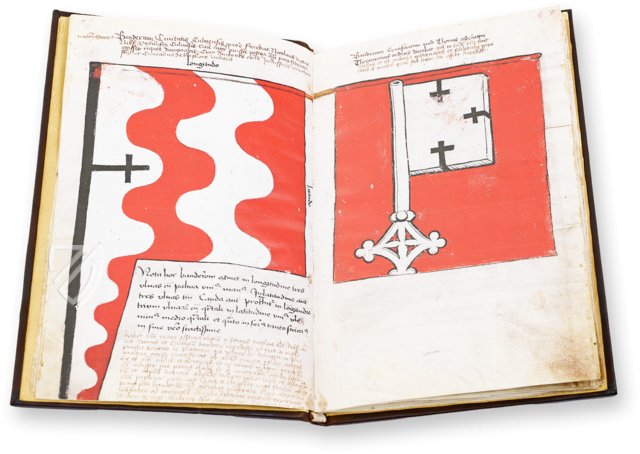 Flag of the Bishopric of Pomesania

In the Middle Ages, bishops also exercised temporal rule over many of the people in their diocese. As a result, these princes of the church were also responsible for military affairs and raised armies. The Prussian Bishopric of Pomesania had been subject to the Teutonic Order since the 1280’s and sent troops to the Battle of Gunwald in support of them, but to no avail. This banner is reminiscent of those carried by the legions of the Late Roman Empire, showing an eagle flanked by two crosiers. 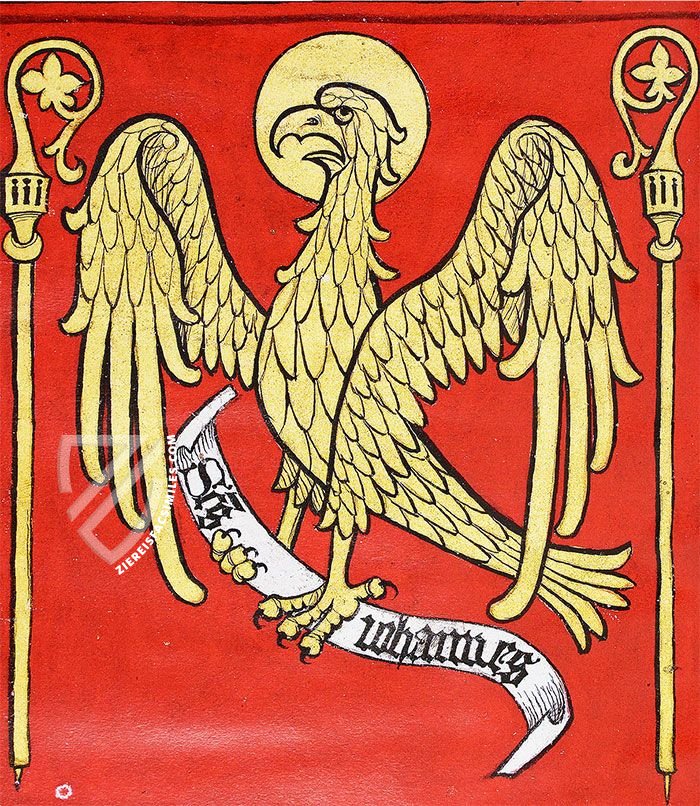 Flag of the Grand Master of the Teutonic Order

The Battle of Grunwald was one of the largest most important in the history of medieval Europe and represents the highpoint of the power and influence of the Teutonic Order in the East Baltic. They were defeated by a collation of the Kingdom of Poland and the Grand Duchy of Lithuania in 1410, resulting in the death of most of the Teutonic knights on the field, including Grand Master Ulrich von Jungingen.

51 banners belonging to the Teutonic Order were captured that day. Of all the trophies taken by the victorious Polish-Lithuanian alliance, the Grand Master’s banner was the most important symbolically. It is virtually identical to the standard of the Teutonic Order, except for the blue stripe at the top and the two points at the base. 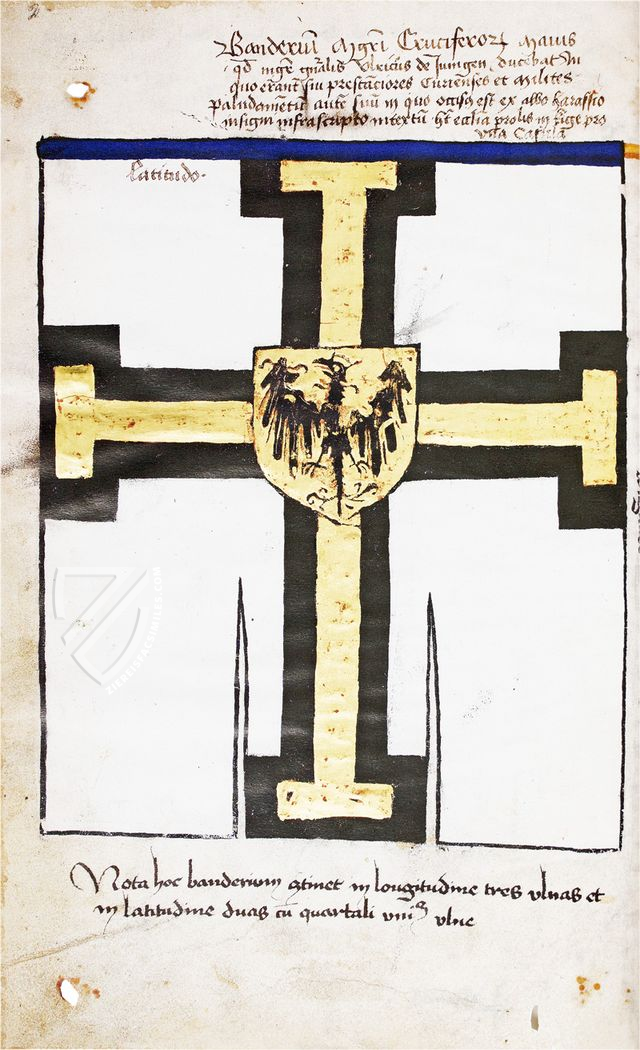 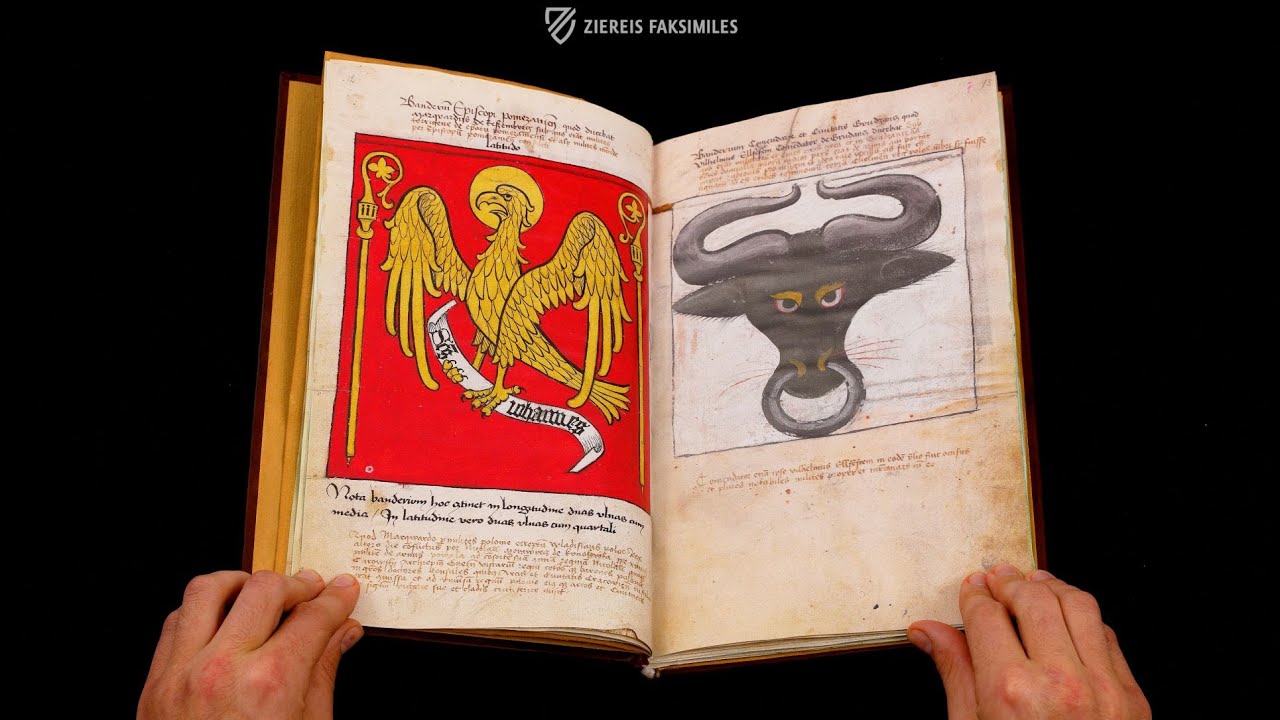 An 11-meter-long leporello, now part of the famous Borgia Group of Mayan manuscripts: one of the most comprehensive sources on the history, art, and religion of ancient America 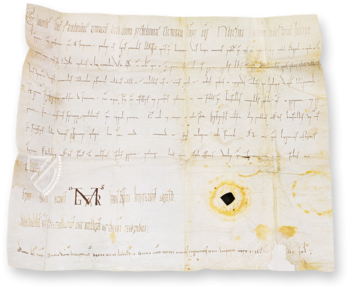 The "founding" document of Austria and the testament to 1000 years of Felix Austria: the oldest surviving record of the term Ostarrîchi, an archaic form of the modern Österreich