The San Pedro de Carden͂a Codex is a manuscript in the tradition of the apocalypse writings of Beatus. This codex originates from around 1180 in the Monastery of San Pedro de Carden͂a in Spain. It contains 51 miniatures adorned with gold, which interestingly combine different styles of illumination with one another. Individual pages of the work are housed today in various prestigious museums.

The Book of Revelation, which is also known as the Apocalypse, is the last book of the New Testament. The story of the end of the world, of Judgement Day, of the sinners’ descent into hell, tremendously fascinated Christians from every land. A Spanish monk by the name of Beatus wrote a commentary on this book from the Bible, which was adapted over several centuries thereafter. One manuscript originating from the tradition of Beatus is the San Pedro de Carden͂a Codex. This codex originates from Spain ca. 1180 and is divided among collections in Madrid, New York, and Girona.

Beatus of Liébana was a monk and theologian, who belonged to the Monastery of Santo Toribio de Liébana in Spain. The monk is famous above all for his magnum opus, a commentary on the biblical Apocalypse in twelve books. These twelve books originate from ca. 776 and are known today as the Beatus-Series. The twelve books were adapted into countless manuscripts, many of which survive to this day. The majority of Beatus manuscripts originate from between the 10th and 12th centuries in northern Spain. The codex from 1180 originates from the scriptorium of the Monastery of San Pedro de Carden͂a and marks an interesting mix of styles during the transition from late-Romanesque to earl-Gothic illumination.

The San Pedro de Carden͂a Codex is illustrated with 51 highly-valuable miniatures, which are richly adorned with gold. Today it cannot be said for certain who was responsible for the valuable images. The miniatures of this Beatus manuscript are of particular historical appeal because they transcend the threshold from late-Romanesque to early-Gothic. Both tendencies can be clearly distinguished from one another in the codex, showing that two differently schooled painters of comparably high quality cooperated. The original edition of the codex only exists in individual fragments. Some pages of the manuscript are found today in the prestigious Metropolitan Museum in New York. The museums of Arqueológico Nacional and Colección Francisco de Zabálburu y Basabe in Madrid also possess some pages in their collection. Additional sections are housed in the Art Museum of Girona. 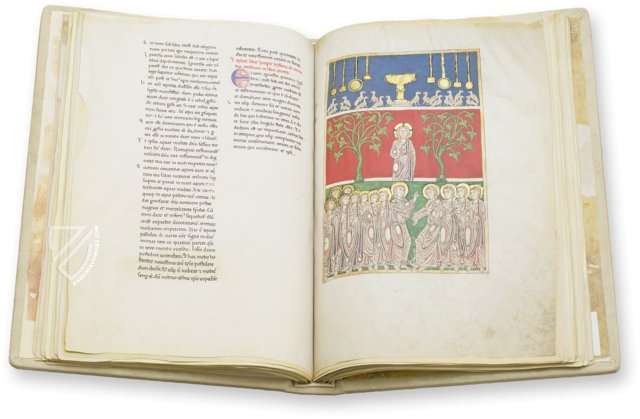 Immediately following the Seven Seals, angels assemble to blow the Seven Trumpets, each signifying a new disaster to befall the earth, referred to as “woes”. This series of calamities begins with an apocalyptic hailstorm, a downpour as destructive as a bombing raid. “The first angel sounded: And hail and fire followed, mingled with blood, and they were thrown to the earth. And a third of the trees were burned up, and all green grass was burned up.” (Rev. 8:7)

The miniatures of this manuscript mark the transition to the Gothic style from the traditional Romanesque of Beatus manuscripts. Both styles are displayed side-by-side in the manuscript. The miniature at hand depicts the blowing of the Second Trumpet, which causes a great mountain burning with fire to be cast into the sea, turning a third of it into blood while also destroying a third of the fish and ships therein.

The figure of the angel suspended in a dark blue heaven has the lithe figure associated with the Gothic style, with natural folds in the garments and detailed wings of red, blue, and shimmering gold, which was also used for the halo and trumpet. The sea is divided into thirds by color, with the blood-third at the bottom filled with the victims of the catastrophe. 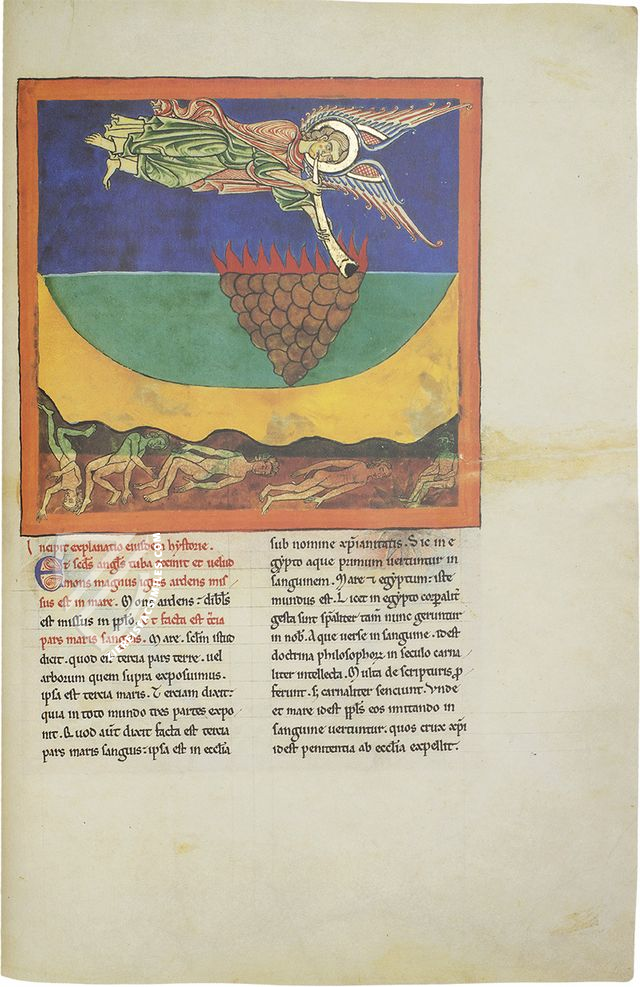 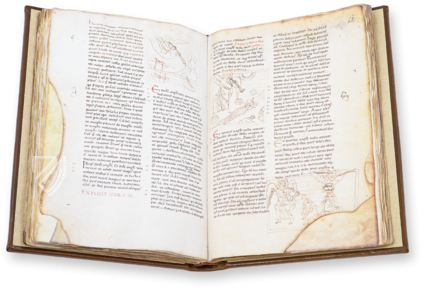 A true rarity as an Italian Beatus manuscript: unique pen and ink drawings with John, the author of the Apocalypse, hidden in each miniature