The Book of Hours of Leonor de la Vega originated between 1465 and 1470 in Bruges. It was not specifically made for Leonora, the sister of the famous Spanish poet Garcilasco de la Vega. Actually, the astounding masterpiece was a gift for her father, who bequeathed the codex to his daughter after his death. The book of hours was manufactured by the Flemish illuminator Willem Vrelant and is embellished with breathtaking miniatures and the most varied of illuminations. Vrelant was one of the most talented students of the great master Jan van Eyck.

The most beautiful handmade and illuminated books of the 15th century undoubtedly came from the Belgian city of Bruges. The most talented artists of the Netherlands joined together to form the painters’ guild of Bruges. Their masterful works were coveted across the entire world. The Book of Hours of Leonor de la Vega is one of the most precious examples of Bruges illumination. It was designed by the painter Willem Vrelant and contained a few illustrations, which clearly demonstrate influences from the painter Jan van Eyck. Jan van Eyck is counted among the so-called old masters, arguably the most important artists in art history. The original of the precious book of hours is found today in the Spanish National Library.

Willem Vrelant was the author of the handmade book of hours. Vrelant (1410–81) lived in Bruges and was active in Flanders as an artist his entire life. He was one of the most gifted of Jan van Eyck’s students. He designed his magnificent book of hours between 1465 and 1470. In the year 1498, the masterpiece was sent as a gift by the Spanish ambassador in Flanders, Diego Ramirez de Villaescusa, to the father of the famous poet Garcilaso de la Vega in Rome. The family of the poet lived in Rome for a long time. Leonora, Garcilaso’s sister, inherited the document after the death of her father, and it is for that reason that it bears her name today.

The book of hours contains 404 parchment pages altogether and is bound in goatskin. The work opens with an unillustrated calendar. The unadorned calendar stands in stark contrast with the rest of the elaborately illustrated codex. 78 full-page miniatures in luminous colors and with rich gold adornment beam before the beholder. Unbelievably fantastical and diverse bordure embellishment is found on practically every page. The pictures visualize important scenes from the events of the prayer book’s text. The bordures display flowers, buds, and a large variety of growth, small animals, and monsters. In addition to this diverse variety of depiction, elaborately embellished initials give structure to the work’s text. 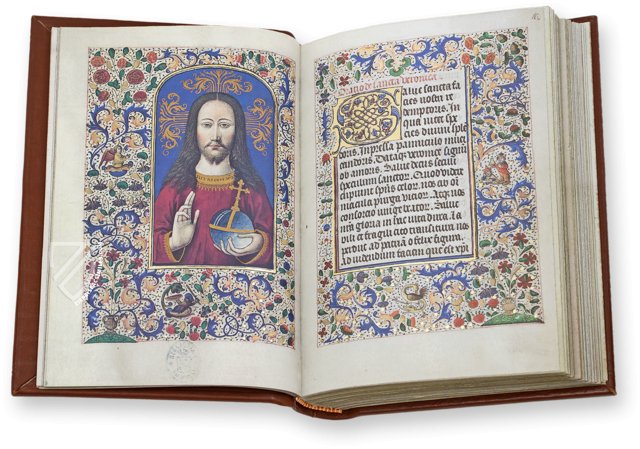 While carrying his cross on the road to Golgotha or Calvary, Jesus encounters his mother as he is being dragged along by the Roman legionaries, dressed here in the fashion of Turkish soldiers. It is contained within a lovely red-blue “D” initial with fine patterns and shimmering gold leaf. With remarkable detail for a historiated initial, even the figures are highlighted with strokes of gold ink. The floral marginalia to the left contains a drollery whose tail has a head of its own. 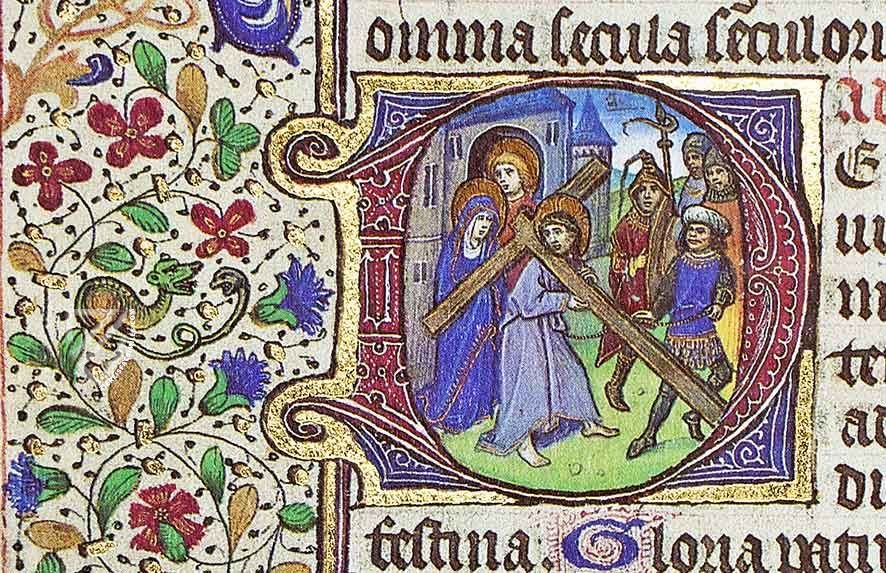 Here we see an early depiction of the Salvator Mundi or “Savior of the World”, a subject of Christian iconography popular with artists from Northern Europe. Christ is typically depicted with his right hand raised in a gesture of benediction while holding a globus cruciger or “cross-bearing orb” in the left. The latter object symbolizes Christ’s dominion over the Earth.

With a golden halo taking the form of a cross against a blue background, Christ looks directly out at the beholder with a look of serenity, neatly parted hair, and a trimmed beard. His red cloak is trimmed with golden cuffs and a collar that reads REX REGUM, “King of Kings”. Colorful tendrils frame the miniature and contain a praying angel as well as a man battling a serpent. 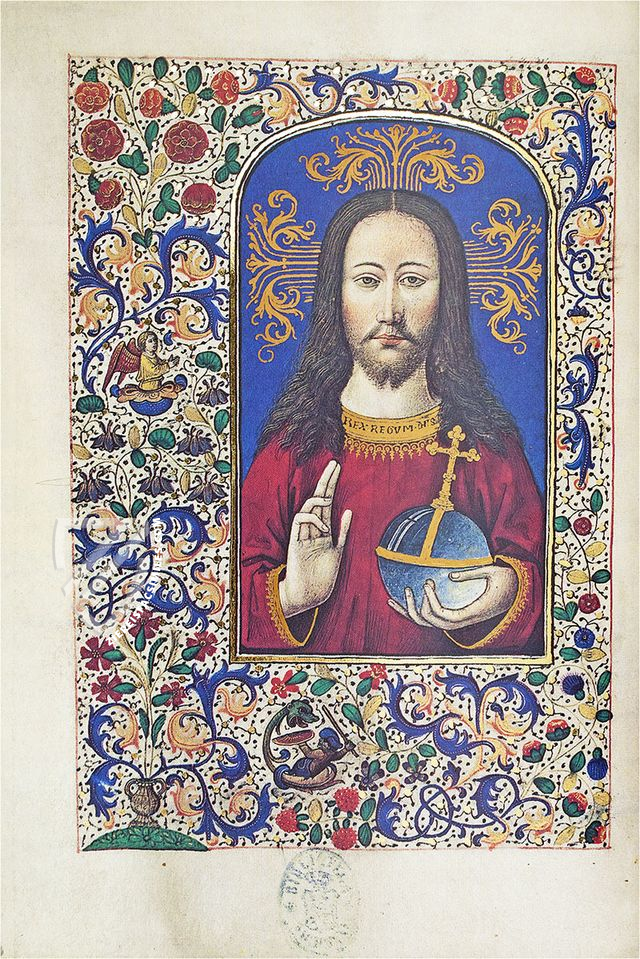 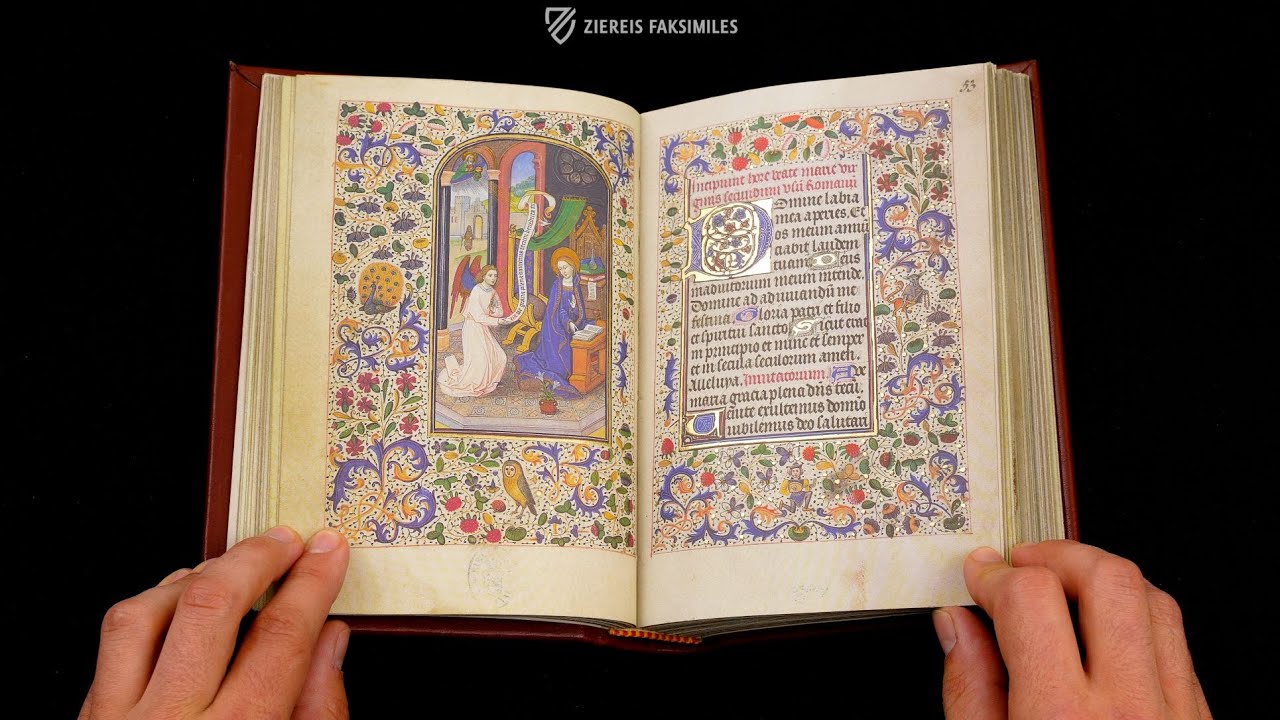 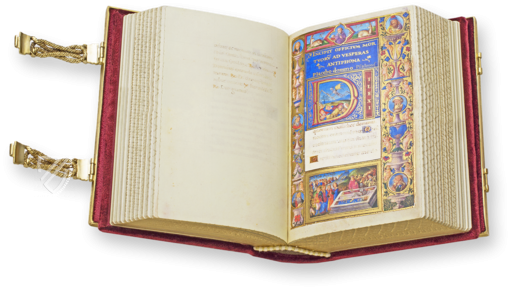 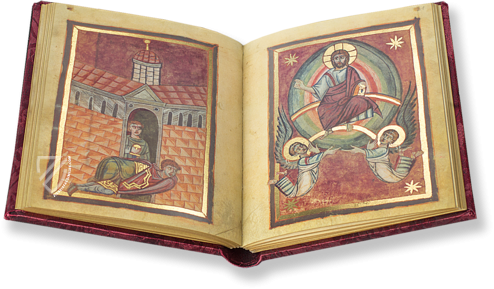 A magnificent work from the famous scriptorium of Reichenau, created for Emperor Henry II: fascinating Ottonian illumination on gold backgrounds with a ostentatious ivory binding