This wonderfully illuminated manuscript from ca. 1460-65 contains a text from the late 12th or early 13th centuries concerning the laws of combat, dueling in particular, attributable to King Philip IV of France (1268-1314). A series of tournament scenes are presented in gorgeous frames of floral tendrils populated with birds, animals, people, and grotesques. The splendid manuscript was commissioned by Francis II (1433-88), the rich and powerful Duke of Brittany who was a major player in the politics of the mid- to late-15th century.

Few images of the Middle Ages are as iconic as two noble knights settling a quarrel with the strength of their arms. However, strict rules applied to dueling and were even specified by law. This splendid manuscript, commissioned by Duke Francis II of Brittany (1433-88) contains the “Ceremonies and Ordinances” regarding the resolution of quarrels by battle as specified in the constitutions of the King of France, Philip IV (1268-1314). Twelve gorgeous miniatures illustrate the manuscript from ca. 1460-65, many resembling tournament scenes.

The Powerful Duke of Brittany

Ruling as Duke of Brittany, Francis II was one of the most influential political figures of the mid-15th century. Aside from his own conflicts with the King of France in his struggle to maintain Breton autonomy from the rest of the Kingdom of France, he also played a critical role in the Wars of the Roses by harboring Henry Tudor and other supporters of the Lancastrian cause. It was at Rennes Cathedral on Christmas Day in 1483 that that Henry swore he would heal the Kingdom of England and unite the warring houses of York and Lancaster by marrying the daughter of King Edward IV, Elizabeth of York (1466-1503), which he did after his victory at the Battle of Bosworth Field in 1485.

The “Ceremonies and Ordinances” regard the laws of combat and the settling of quarrels by duel according to the constitutions created by King Philip IV of France. Following a splendid depiction of the royal coat of arms and dedication miniature of King Philip, another ten miniatures, all surrounded the dense floral borders with birds and drolleries, show the settlement of a quarrel. Scenes include the knights presenting their arguments and engaging in prayer before finally settling things on the “field of honor”. The lovely late-Gothic imagery presents these scenes as though they were in a tournament and present wonderful details concerning clothing, arms, and armor during the period. 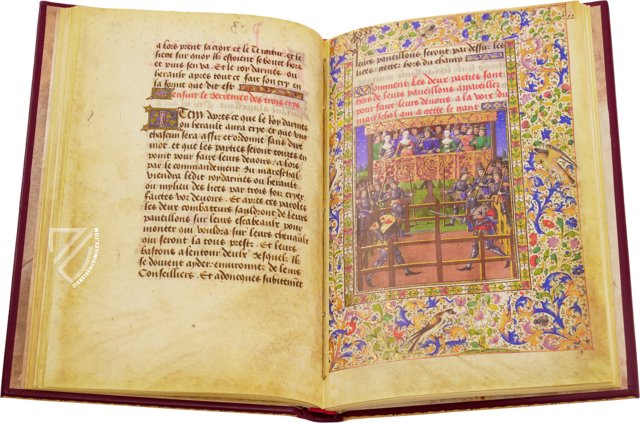 Two knights involved in a dispute that cannot otherwise be resolved are presented before King Philip and the rest of the royal court including two cardinals or bishops and numerous courtiers. The appellant, kneeling on the left, raises his sword to indicate his willingness to fight and die to prove he is in the right. It is a wonderfully designed scene with a masterful use of depth and space, which is presented in an architectural frame that makes it seem as though the beholder was standing there. 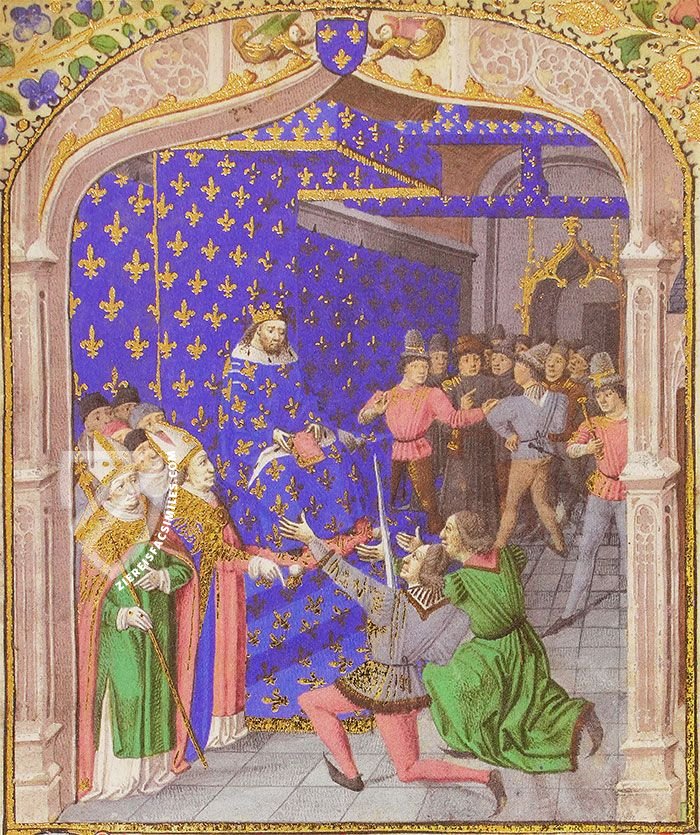 The Duel is Resolved

Spectators watch from an elegantly decorated grandstand and gather around the lists as the duel comes to a bloody conclusion. The victor stands confidently clutching his sword with both hands and looks down as his fallen foe, whose gauntlets and helmet have been stripped from him to reveal his face. He is unconscious and blood seeps from under his armor.

The artist has once again used diagonal lines to create a quasi-three-dimensional scene, especially with regard to the lists and grandstand. The scene is surrounded by a gorgeous frame full of flowering tendrils, strawberries, raspberries, a songbird, and a hybrid creature resembling a centaur with a human torso and head protruding from the body of a lion and holding his own tail in his hands. 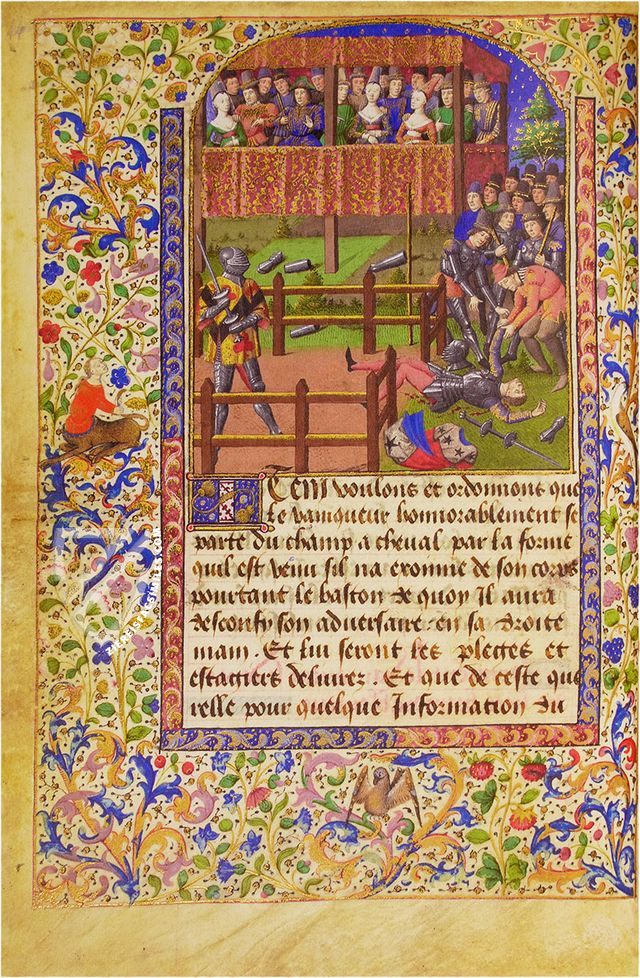 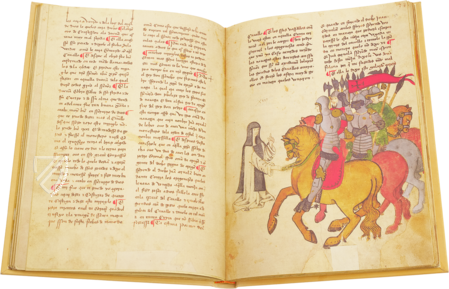