The Trappist Abbey of Westmalle houses the Cistercian Westmalle Antiphonary, which was illuminated ca. 1142-1147. It contains the liturgy of Bernard of Clairvaux in addition to precious traces of the earlier Cistercian chant, unknown until now. This palimpsest has evidence of scraping, rewriting, variants, deletions, displacements, omissions, gaps, fragments, and duplicate pieces. Wear and tear over the centuries have left the antiphonary mutilated, lacerated, sewn up, erased, and scratched.

An Antiphonary is a liturgical book used by a choir, which contains antiphons – short chants sung in refrain whose texts are drawn from the Psalms. The Cistercian Westmalle Antiphonary is a fragmentary palimpsest that was originally written ca. 1136/40 before being scraped and corrected ca. 1140/43. They contain the primitive Cistercian liturgy that was reformed by one of the founders of the Cistercian Order and the Abbot of Cîteaux, Stephen Harding (ca. 1060–1134), shortly after 1108, during which time he imposed the antiphonary of Metz on the Order. This remained in use until the second reform under Bernard of Clairvaux (1090–1153) in the early 1140’s. Therefore, these fragments represent a precious witness to the existence of the Bernardine drafts. Codicological analysis has revealed that the fragments originated in the Abbey of Fille-Dieu, Switzerland and were created by the same hands as well as having the same ornamentation and corrections. These corrections were likely made in the 16th century at the earliest in Hautcrêt Abbey, which was the mother house of Fille-Dieu until 1536. Nevertheless, the fragments of the Cistercian Westmalle Antiphonary represent a critically important source for the evolution of Cistercian chant during the 12th century. Brepols Publishers – Turnhout, 2011
Publisher: Brepols Publishers – Turnhout, 2011
Commentary: 1 volume by Alicia Scarcez
Language: French
1 volume: Exact reproduction of the original document (extent, color and size) Reproduction of the entire original document as detailed as possible (scope, format, colors). The binding may not correspond to the original or current document binding.
Price Category: € (under 1,000€)
Edition available
Price: Log in here!
Order / Ask a Question
You might also be interested in: 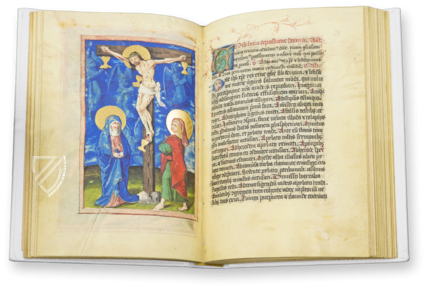 Illumination inspired by copperplate engravings: 30 magnificent miniatures of the Passion from the Cistercian Abbey of Herrenalb in Baden-Württemberg