The Codex Schürstab is a medieval astrological handboook that explains the lessons of the planets and stars in connection with their influence on human life and health. The text is written in Old German and is therefore addressed to less educated lay people, although the lavish and precious decoration of the manuscript is more than worthy of its wealthy patrons: The couple Erasmus and Dorothea Schürstab belonged to an influential patrician family in Nuremberg. This is reflected in the 54 refined and extremely high-quality miniatures, which not only vividly depict planetary movements and signs of the zodiac with great variety, but also expressively illustrate the practical advices for the treatment of different diseases. For this, the talented but unknown master used the finest painting materials as well as the most delicate gold leaf.

The handbook of medicine in the Middle Ages, the most famous edition of which is the Codex Schürstab, originates from 15th century Nuremberg and sheds light on the various rules of health that are recorded here in old German layman’s language. In the Middles Ages, the dominant teachings of the four elements and especially the influence of the planets on the Earth and people that was taught at universities were made accessible to less-educated people on the 124 pages of this work, which is decorated with a total of 54 impressive miniatures.

The Medical Guidebook of the Middle Ages

Of the Influence of the Stars encapsulates the astrological phenomena, of which people in the Middle Ages attributed great importance. The planets influenced not only the weather and years, but also had a direct influence on the lifespan of a person, on the progression of diseases, and the treatment of such illnesses. There were specific times recommended, in which bloodletting would be best conducted, when laxatives should be taken or even when it would be better to leave it alone. The work gives the modern reader a comprehensive depiction of the medieval worldview.

The work opens with tables that serve as a basis for the calculation of the lunar phases and feast days. Following thereafter is a calendar with rules for the months and twelve chapters, which are dedicated to the explanation of the zodiac in great detail and with appealing miniatures. These are accompanied with seven-part groups of text, which are characterized by a spherical depiction of the stars and planets and comprise a comprehensive planetary lesson. The next part of the book describes the doctrine of humors that had already been practiced since antiquity. In clear, impressive miniatures, the properties and behaviors were thematized, which were linked to the four different humors of the body (choleric, phlegmatic, sanguine, and melancholic). The last group of themes in the work are concerned with medical aspects such as blood-letting, blood-testing, bathing, and cupping. Finally one finds a few prescriptions that were useful for good health.

An unknown artist is responsible for the 54 miniatures of preeminent quality. In the highest technical refinement and applying the finest paints, he illustrated the pages of the work. He is guided by traditional picture motifs of medieval book painting, but mates every illustration with his own personal touch. This allows him to combine Gothic Realism with the cheerful style of late medieval bourgeoisie. Through the use of the finest colors and shimmering gold leaf the paintings were made into a small but valuable work of art. 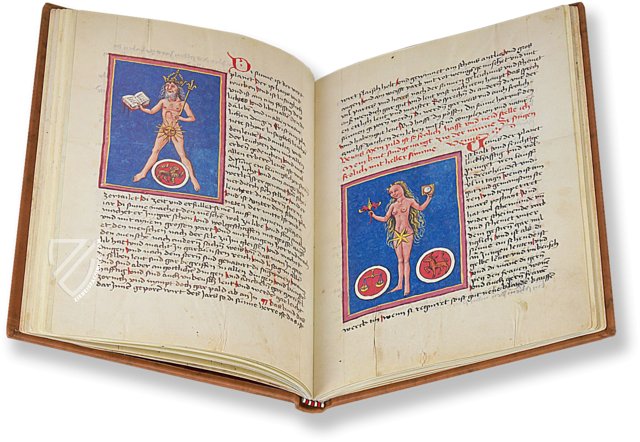 The so-called “Zodiac Man” was common in medieval calendars, books of hours, and treatises on philosophy, astrology, and medicine. Rooted in ancient medicine going back to the Babylonians, medieval physicians believed that there was a connection between the cosmos (macrocosm) and the human body (microcosm). Furthermore, they associated particular body parts with zodiac signs and planned procedures based upon the cosmos, especially the moon, whose effects on the tides are self-evident. 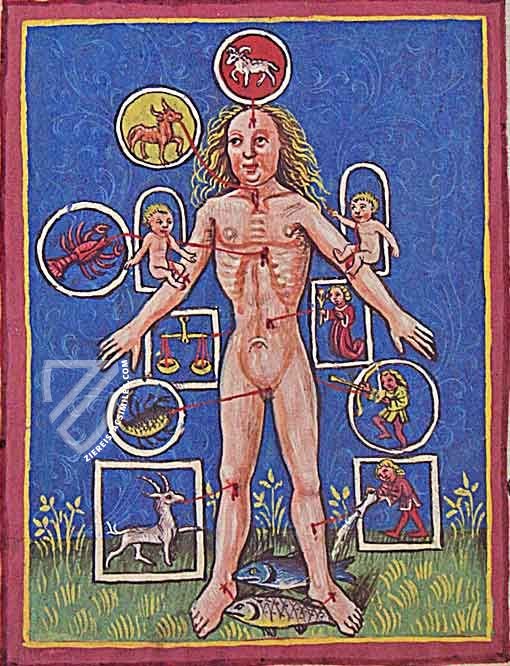 This medical/cosmological manuscript opens with a depiction of the patrons of this remarkable work: the famous Erasmus and Dorothea Schürstab from Nuremburg. They are pictured in prayer on grass before a background of tendrils and flowers. Both hold rosary beads, are dressed in the fashion of late-medieval urban bourgeoisie, and flanked by twelve escutcheons.

Christ appears battered and displaying his wounds at the top of the page before a brilliantly polished, patterned gold background. He is framed by a Gothic doorway and standing on a checkboard floor. A palm branch hangs from the left arm of the cross and a scourge from the right, symbolizing the Passion. Floating beneath him are two angels bearing the spear and vinegar-soaked sponge of the Crucifixion. 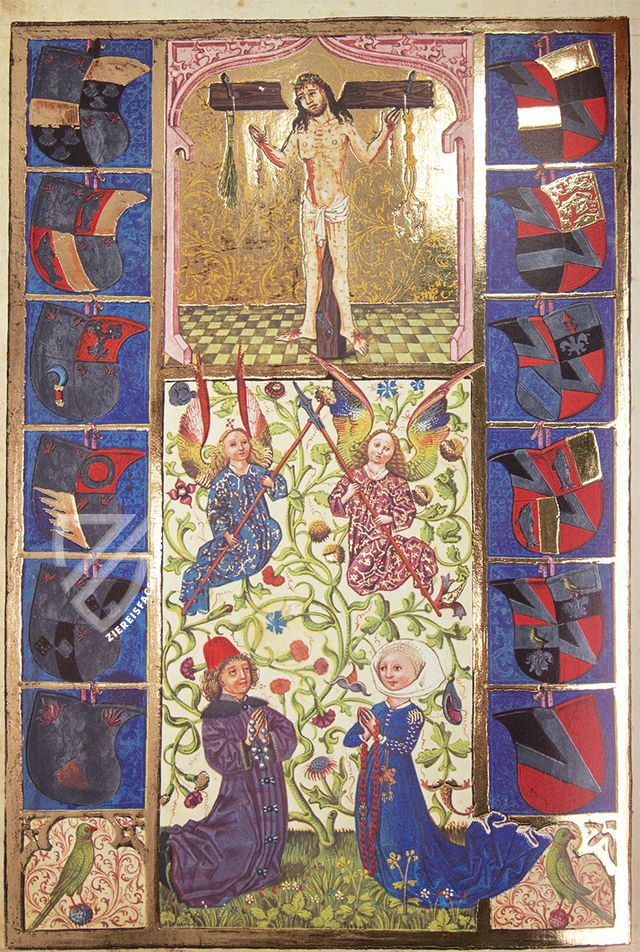 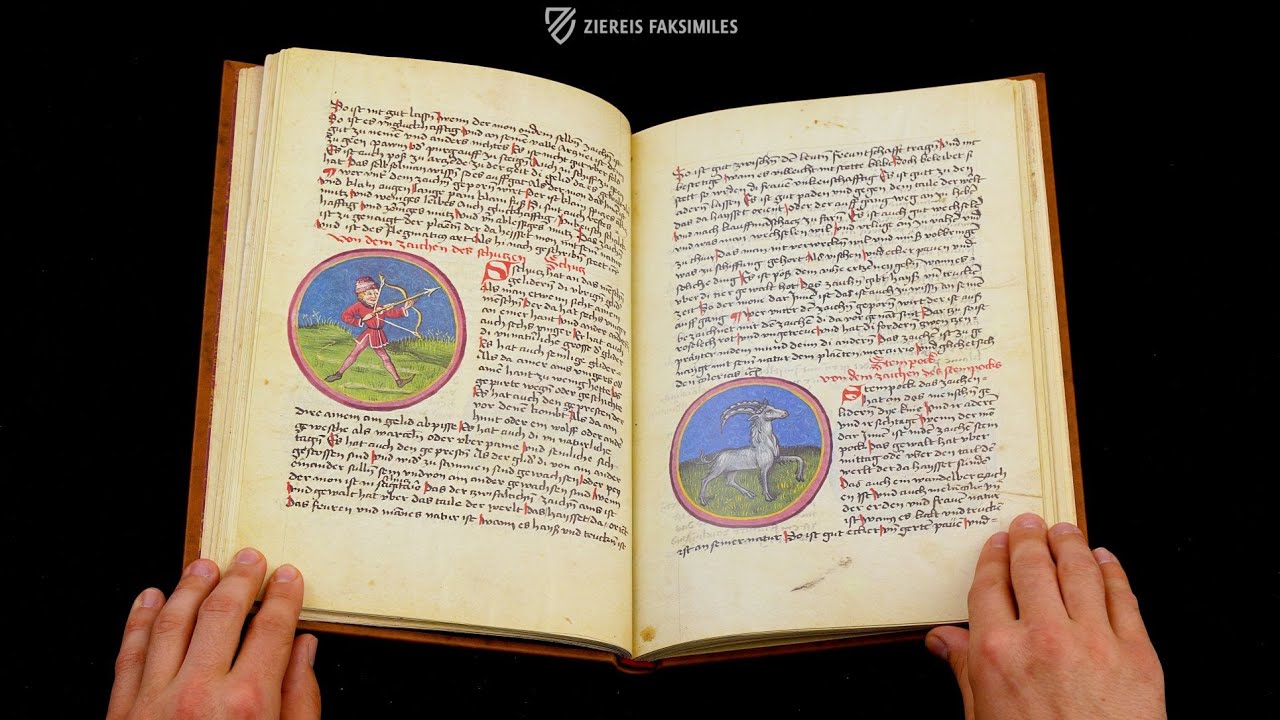 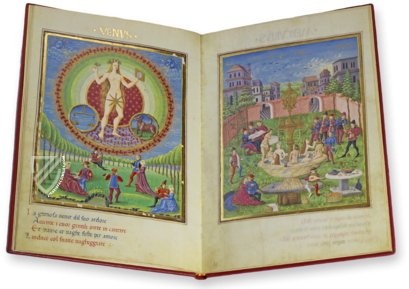 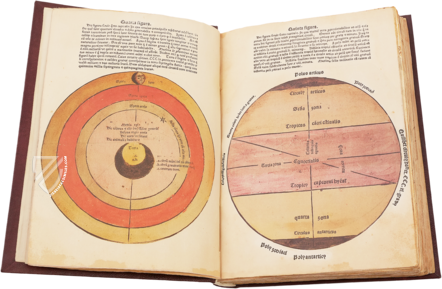 Influencing the course of history: one of the first printed works from Flanders, which made Christoph Columbus go off course 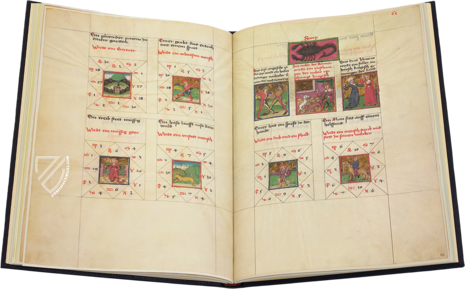 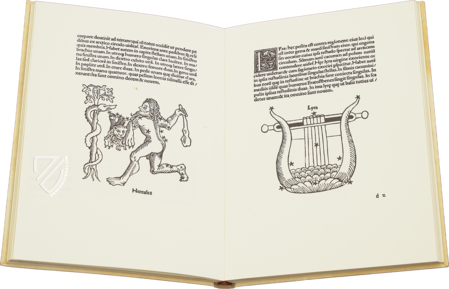 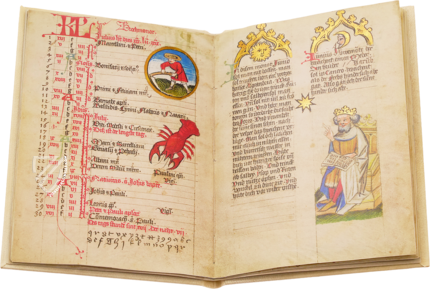 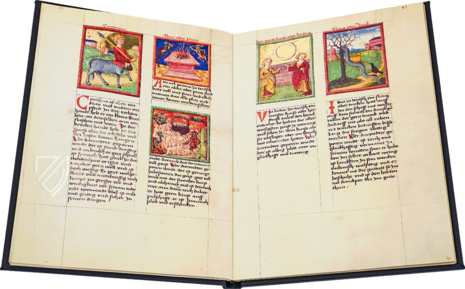 Answers to life's small and big questions: a medieval guide in German with golden pictures