The Codex Sinaiticus or “Sinai Bible” is an ancient and remarkably complete copy of the Bible that is rightly considered to be one of the most important manuscripts in the world. Created sometime in the mid-4th century by a team of nine scribes and correctors, possibly Caesarea in Palestine, the manuscript has had a long and complex ownership history, most of which is shrouded in mystery. It simultaneously represents the oldest and most accurate record of the Greek text of the Old Testament (Septuagint), one of the oldest and most complete manuscripts of the entire Bible and contains the oldest complete copy of the New Testament. Discovered in 1844 by the German biblical scholar Constantin von Tischendorf at the Monastery of St. Catherine on Mount Sinai, after which it is named, this historical treasure is of incomparable worth for paleographers, philologists, and scholars working in the field of textual criticism. Today, the manuscript is divided between four separate institutions that have come together in order to create a facsimile of the complete original document, which is presented here.

The Codex Sinaiticus is one of the most precious and coveted manuscripts in the world and is of inestimable value for our understanding of the history of the Bible. However, this desirability was also a burden to researchers because it was divided among four libraries in Egypt, Germany, Russia, and England. The creation of this facsimile edition, only possible through the cooperation of these institutions and the technology of digitization, is a tremendous boon to the study of the Codex Sinaiticus that also allows the delicate, nearly 1,700-year-old parchment folios to be protected from further damage and preserved as the historical treasure that they are.

Unravelling the Origins of the Manuscript

There is no indication of who commissioned the manuscript, who made it, and for what purpose, be it for use in a monastery or a large urban church. Nonetheless, paleographers date it to the mid-4th century: it could not have been written before 325 because it includes the canon tables created by Eusebius and the style of the handwriting indicates it was probably written by ca. 360 at the latest. The handwriting also points to Caesarea, Palestine as a likely place of origin. Analysis of the text shows the evidence of at least three and probably four scribes as well as five corrector who amended the text over the course of the next eight centuries. The manuscript may have originally been in the Library of Caesarea, but the earliest mention of it comes from the Italian traveler Vitaliano Donati, who describes a Bible similar to it in his diary while visiting the Monastery of St. Catherine at the foot of Mount Sinai in 1761.

More than 80 years after Donati’s visit, German biblical scholar Constantin von Tischendorf was visiting St. Catherine’s in the spring of 1844 when the monks brought his attention to a portion of a very old Bible. Tischendorf acquired 43 of these leaves and brought them back to Leipzig. These leaves were copied and published in 1846 under the title Codex Friderico-Augustanus in honor of Tischendorf’s patron, King Frederick Augustus II of Saxony, before becoming part of the collections of the Leipzig University Library. In 1845, the Russian Archimandrite Porfirij Uspenskij examined the manuscript and acquired three fragments that were eventually acquired in 1883 by the Imperial Library in Saint Petersburg. Tischendorf returned to Mount Sinai in 1853 to acquire more fragments, one of which was also acquired by the Imperial Library and his third visit in 1859 was patronized by Tsar Alexander II. It was during this visit that he acquired the majority of the manuscript comprising 347 leaves and brought it back to St. Petersburg – on loan at first but eventually it became permanent. Tischendorf published a lavish facsimile in 1862 and presented it to the Tsar on the 10th of November.

Sale by the Soviets

The manuscript was formally inducted into the Imperial Library in 1869 and remained there until 1933 when the British government became aware that the Soviets, raising funds for the Second Five-Year-Plan, were looking to raise capital by selling the Codex Sinaiticus. The British Museum acquired 347 leaves, representing the majority of the prized manuscript, for the sum of £100,000 and it was delivered on December 26, 1933 – a late Christmas present. One small fragment was later discovered in St. Petersburg and remains there. Although St. Catherine’s on Mount Sinai continued to claim ownership of the manuscript, the acquisition by the British Museum was ultimately deemed legal. The monastery received some consolation in 1975 when 18 leaves, some fragmentary, were discovered in a chamber underneath St. George’s Chapel. More leaves have been discovered serving as the bindings of other manuscripts.

Aside from being one of the most important specimens of the Septuagint, the version of the Old Testament first adopted by Christian Greeks, the Codex Sinaiticus is also the oldest Bible to be so thoroughly corrected, which speaks to its reliability and authority as a source. It was a “living document” for roughly 800 years: the earliest corrections appear to have been made by the scribes themselves in the mid-4th century, but words continued to be changed and sometimes entire sentences added until the 12th century. Various texts counted among the apocrypha by most Protestants as well as the Epistle of Barnabas and The Shephard of Hermas can also be found in the codex.
The way in which the books of the Bible are arranged within the Codex Sinaiticus is also significant. It may appear idiosyncratic and out of order to the modern observer but is useful for our understanding of how biblical texts were read, copied, and used during the 4th century as well as the history of the formation of the Bible. Finally, the fact that all of these texts could be bound together in a single volume is significant for two reasons: the quality of the parchment and the sheer skill required to organize and support over 730 leaves (over 400 of which survive) make it a superb specimen of book manufacturing in Late Antiquity and the fact that all these texts were combined into a single codex influenced the way Christians thought about their religious books.

This section from the Book of Genesis begins with the burial of Abraham’s wife Sarah then tells of how Abraham sent his servant to find a wife for his son Isaac. In the town of Nahor, he discovers the perfect candidate in a beautiful young woman named Rebecca. Although most of the manuscript has survived intact, some sections had to be reconstructed, including this page that exhibits significant water damage. Here we see how a detached fragment has been aligned in position with the proper column to restore as much of the page as possible. 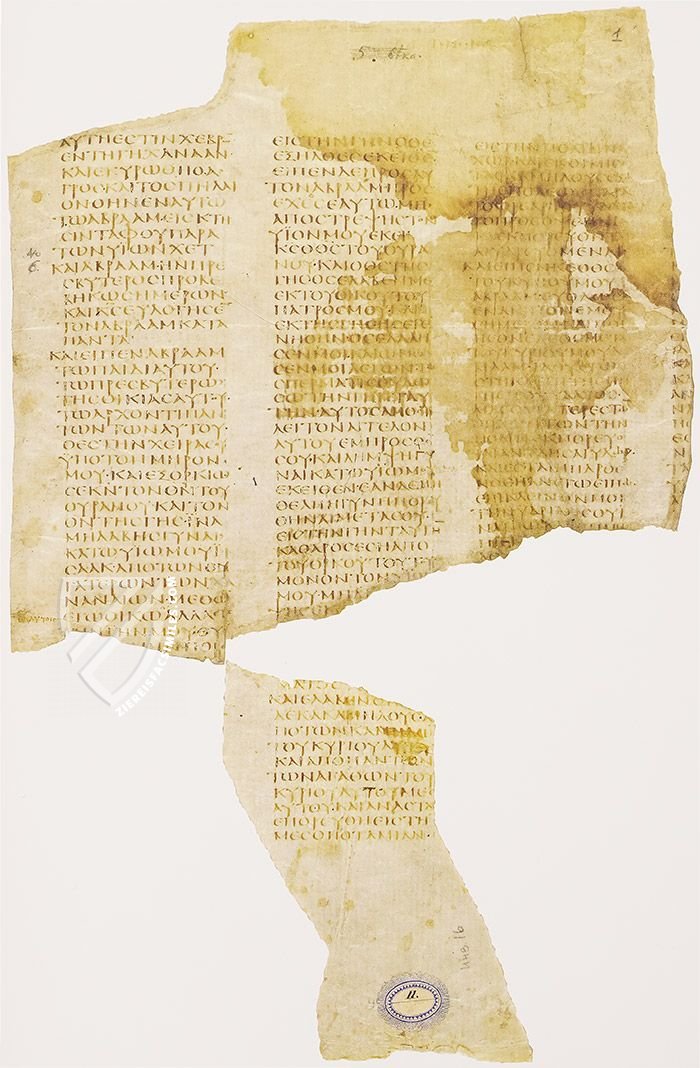 Most of the pages in the manuscript are neatly written in four columns, except for in the Poetic books, which are written in two columns. One note in the upper margin appears to have been rubbed out and another has been written over it, but in a much sloppier hand than is responsible for the gorgeous, clear Greek majuscule script of the text itself.

This page introduces the Book of Isaiah, one of the most important prophetic texts of the Old Testament and one which is cited heavily in Christian typology – the doctrine concerning the relationship between the Old and New Testaments, specifically the way that events, persons, and statements in the Old Testament serve as “types” allegorically foreshadowing “antitypes” or aspects of Christ’s life or other episodes in the New Testament. 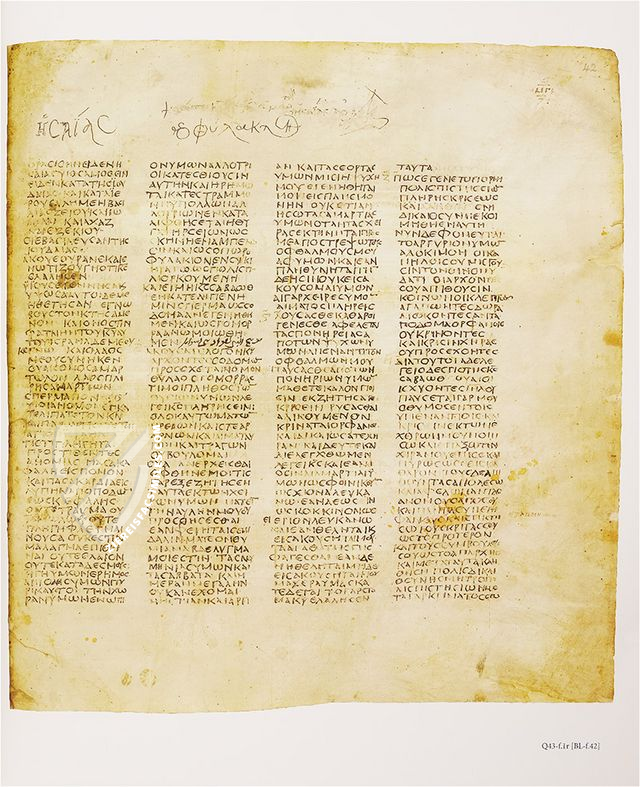 #3 Gospel of Matthew from the Codex Sinaiticus