The Cologne Bible of 1478/1479 is a significant work of the incunable period because it is the first Bible in Low German and its 123 woodcuts, primarily illustrating the five books of Moses and the Apocalypse, were reused or recut for subsequent Bibles as well as influencing artists such as Albrecht Dürer and Matthäus Merian. Although the work is an early print it is by no means primitive: Anton Koberger bought 109 of the woodcuts after having many of them masterfully colored and repeated the series in his High German Bible printed in Nuremberg in 1483. The image of Creation is considered to be one of the most beautiful woodcuts of any early printed Bible and presents the Ptolemaic, medieval world view of the cosmos in artistic glory. It is theorized that up to three unknown masters created the woodcuts, which are characterized by rich backgrounds in which secondary scenes are often embedded.

This manuscript is a milestone both in the development of the German language and the development of the art of printing and engraving. It is one of the first printed Bibles furnished with woodcuts that are as artistically refined as the contemporary miniatures of the period. The splendid, lively woodcuts are embedded into the relevant texts and characters are often labelled to for the ease of the reader. Four of the text pages are adorned by highly detailed historiated frames with dense tendrils. Heinrich Quentell (d. 1501) and Bartholomäus von Unckel (active 1247–84) are credited with printing the well adorned Bible in the “Zum Pallas” publishing house in Cologne.

The Splendor of Creation

One of the most beautiful woodcuts in an early Bible print is the Creation image, which was copied and colored by Anton Koberger for his Bible of 1483. The picture shows the entire cosmos according to the Ptolemaic, medieval world view: God the creator and sustainer of the world rules the universe. Without the problems of space and time, the medieval artist depicts God on the one hand as the Blessing One, pouring out His Spirit, and on the other hand as the Creator in Paradise, where He separates the androgyne, Adam as an asexual being, into Adam and Eve, giving rise to sexuality. This is commonly understood as the subordinate creation of woman from Adam's rib, which is depicted in the miniature.
Furthermore, the woodcut shows the idea of the still prehistoric earth as a disc swimming in the primeval ocean populated by strange creatures. Above it rises the firmament with the sun, moon, and stars around which in the spiritual sky the 24 elders (Rev. 4:4) are turned toward and worship almighty God. The circle, symbol of perfection, is embedded in a square into which four winds blow – a sign of earthly, but limited perfection also symbolizing the limitations of trying to visually conceive of the infinite. 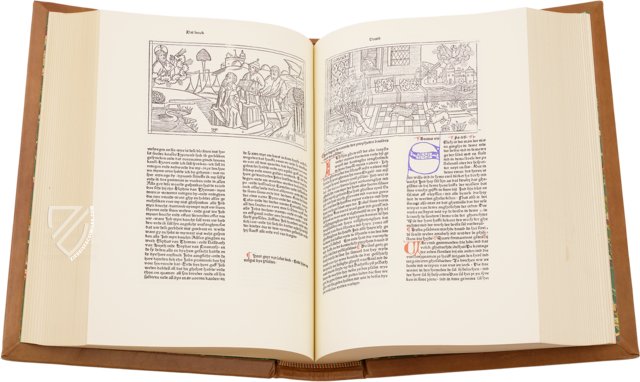 One of the most beautiful early woodcuts condenses the cosmos into a single image. Unbound by the problems of space and time, the artist depicts God both bestowing his blessing by pouring out his spirit and as the Creator in Paradise, separating Eve from the side of Adam as the animals – a unicorn included – look on. Earth is depicted at the center of the universe according to the Ptolemaic model swimming in a cosmic ocean full of strange creatures surrounded by the sun, moon, and stars. The 24 elders face towards God and worships him. This image, a circle embedded in a square, symbolizes perfection, but the four winds blowing in the corner are a sign of earthly imperfection. 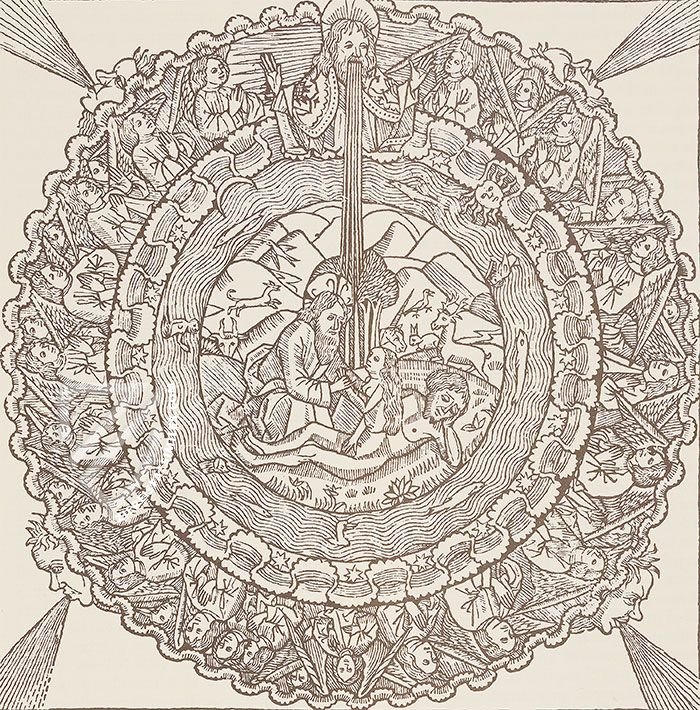 This masterfully printed page is presented within a historiated floral tendril border populated by animals including a dog chasing a hare as well as humans blowing hunting horns, playing bagpipes, and dancing. It also has a bas-de-page woodcut showing the Three Kings paying homage to Baby Jesus as their arms bearers and other members of their entourage look on.

Three more woodcuts are presented above the text of the Book of Revelation, but the first on the left depicts Tertullian’s popular but apocryphal legend that John was unharmed when plunged into a vat of boiling oil in Rome before being exiled to the Aegean Island of Patmos, where he is shown writing the book in the central woodcut. John’s vision of Christ and the seven golden lampstands representing the Seven Churches of Asia is presented on the right. 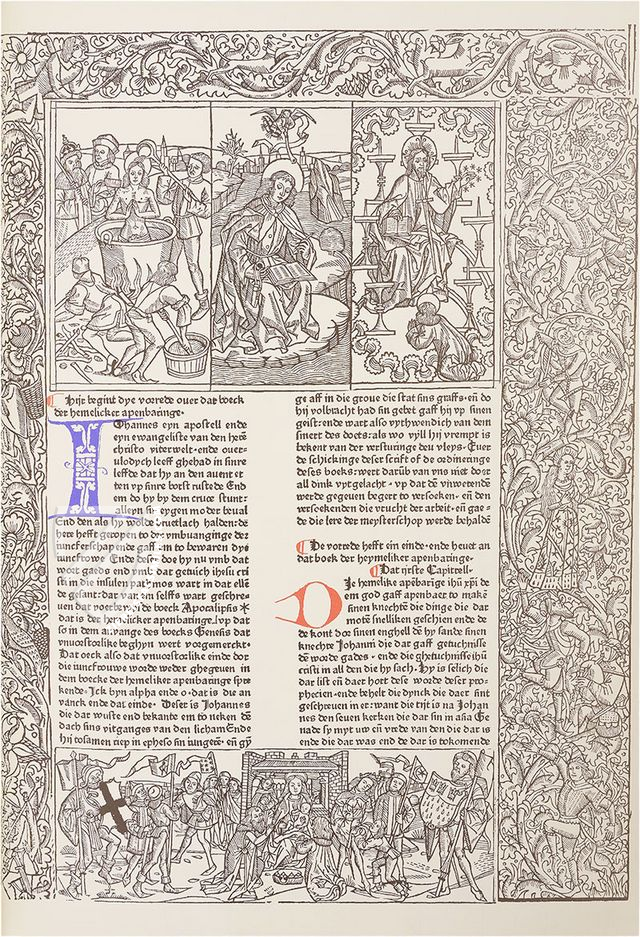 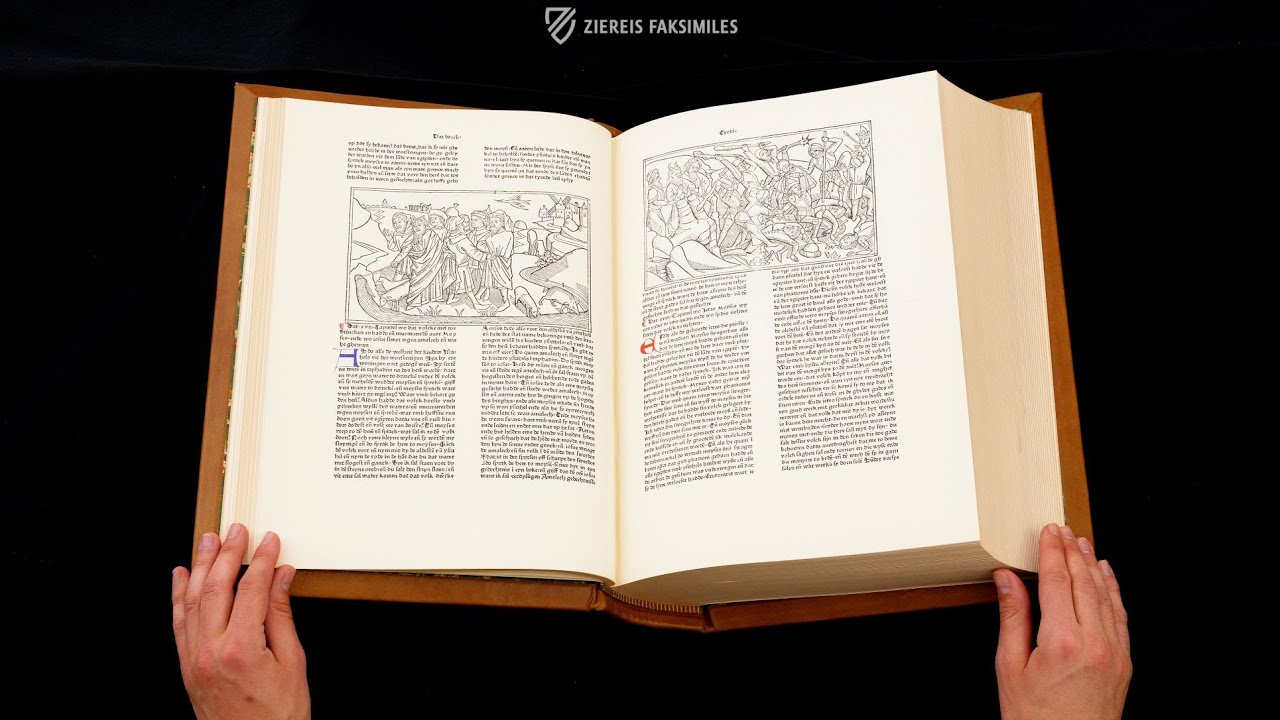